Accessibility links
Businesses Try To Navigate The World's Coronavirus Cargo Pileup There was a rush of commerce after China reopened. But then demand in the West for many goods dropped, with businesses closing and consumers staying home as the pandemic spread. 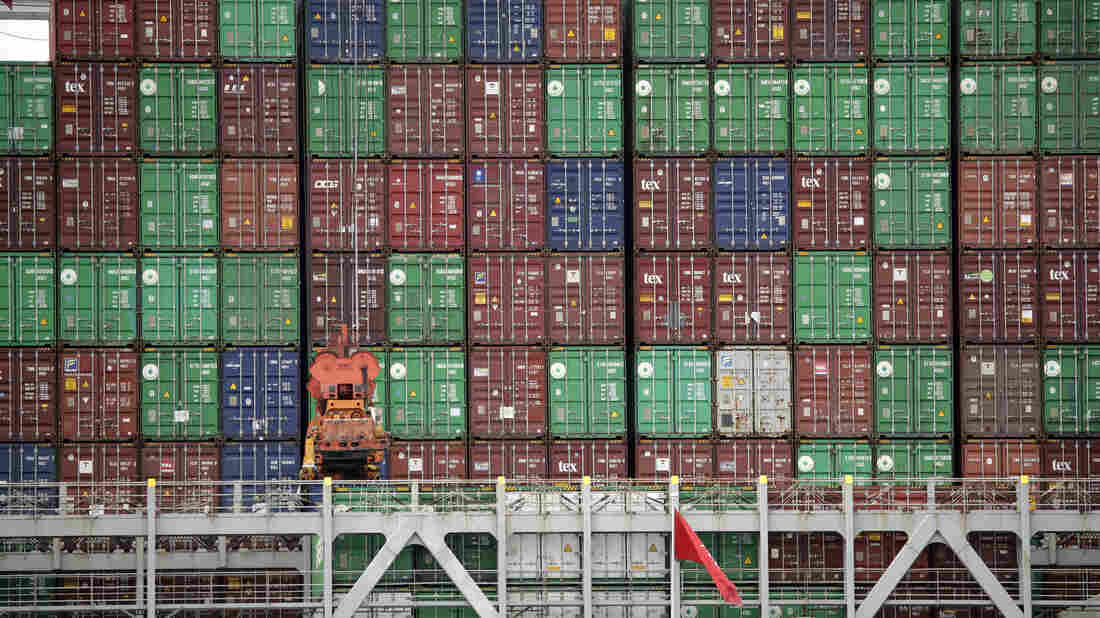 Cargo containers are stacked on a ship at California's Port of Los Angeles. Consumer goods are arriving from China and elsewhere, but a lot is not getting to its destination. Marcio Jose Sanchez/AP hide caption 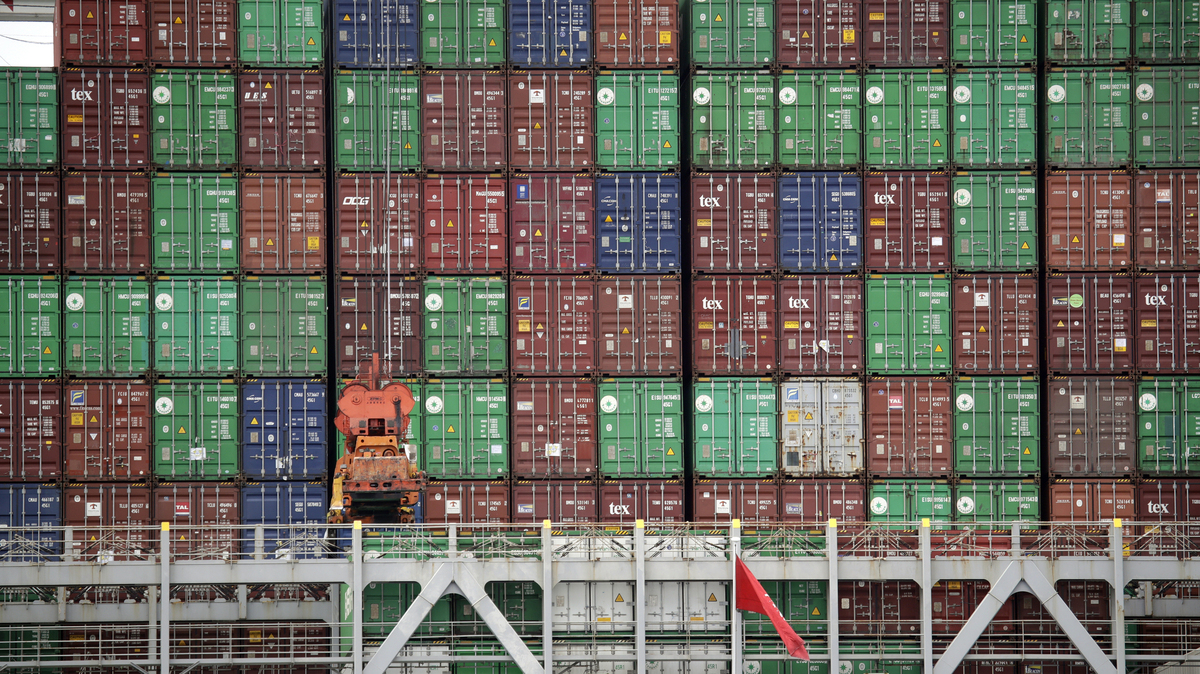 Cargo containers are stacked on a ship at California's Port of Los Angeles. Consumer goods are arriving from China and elsewhere, but a lot is not getting to its destination.

At least once a week, the Port of Los Angeles launches a drone over its expansive facility. It gives port officials a good vantage point to check on the 7,500 acres and 43 miles of waterway that make up the busiest container port in North America.

Consumer goods are arriving from China and elsewhere, but a lot is not getting to its destination.

"Demand has plummeted because you and I are not out at the stores every day," Seroka says. "The orders that go to store are less than they normally would be."

Instead, Seroka says much of the cargo is being moved to a vast warehouse and distribution center complex in Southern California. "We have approximately 1% vacancy in our more than 1.8 billion square feet of warehousing," he says.

This is a scenario playing out at many ports in the U.S. and the rest of the world, as the coronavirus upends global supply chains. Department stores and retail outlets that ordered consumer goods — from clothing to auto parts — ahead of the pandemic are now shut. But container ships were already underway and now cargo has no place to go.

Lars Jensen, the founder of Copenhagen-based SeaIntelligence Consulting, says the cargo's often left on the docks.

"If you look at India, for example, there was a period here where at least 60% of the truck drivers were not at work because they had been put in quarantine," he says. "So you might not actually have the trucking capacity to move it."

Or Jensen says there are serious cash flow problems, such as an importer going bankrupt. "That is a very real risk in these days, which obviously means he's not going to come down to the port to pick it up," he says.

Jensen says other importers have run out of warehouse space.

This is a complete reversal from late February and early March, when Western importers were desperate to get goods again from China after the country had been closed down because of the coronavirus, says Shereen Zarkani, global head of sales for shipping giant Maersk.

"As soon as China started opening up, we had this rush of our customers asking to really find ways to speed up the supply chain," she says.

Then the coronavirus spread to Europe, the U.S. and elsewhere.

"All of a sudden, those same customers who were really rushing to get the cargo in, we started having completely different conversations on how do we store cargo," she says.

Maersk is one of several companies that is now storing large numbers of shipping containers at hubs scattered across the globe.

"We have around five big ones around the world like in Malaysia or in Morocco," Zarkani says. "We store our customers' cargo there so that [it's] ready once demand starts picking up." At that point, the customer can decide to ship it to the original destination or to a new place.

SeaIntelligence's Jensen says other shipping companies, like French-owned CMA CGM, are changing routes in order to slow down the shipments and save money now that oil prices are very low. They can bypass Egypt's Suez Canal, where a single transit fee for a big container ship can cost half a million dollars, he explains.

"Suddenly, it makes sense to take a long route all the way around Africa and not use the Suez Canal," Jensen says. "And there's apparently a lot of the importers that don't really mind the cargo being a week delayed."

Traders may be willing to wait — at least until the coronavirus pandemic is over and consumer demand returns.