Accessibility links
Michigan Flooding Threatens City With 9 Feet Of Water The National Weather Service calls the event "extremely dangerous" and says it was caused by "catastrophic failures at the Edenville and Sanford dams," roughly 140 miles north of Detroit. 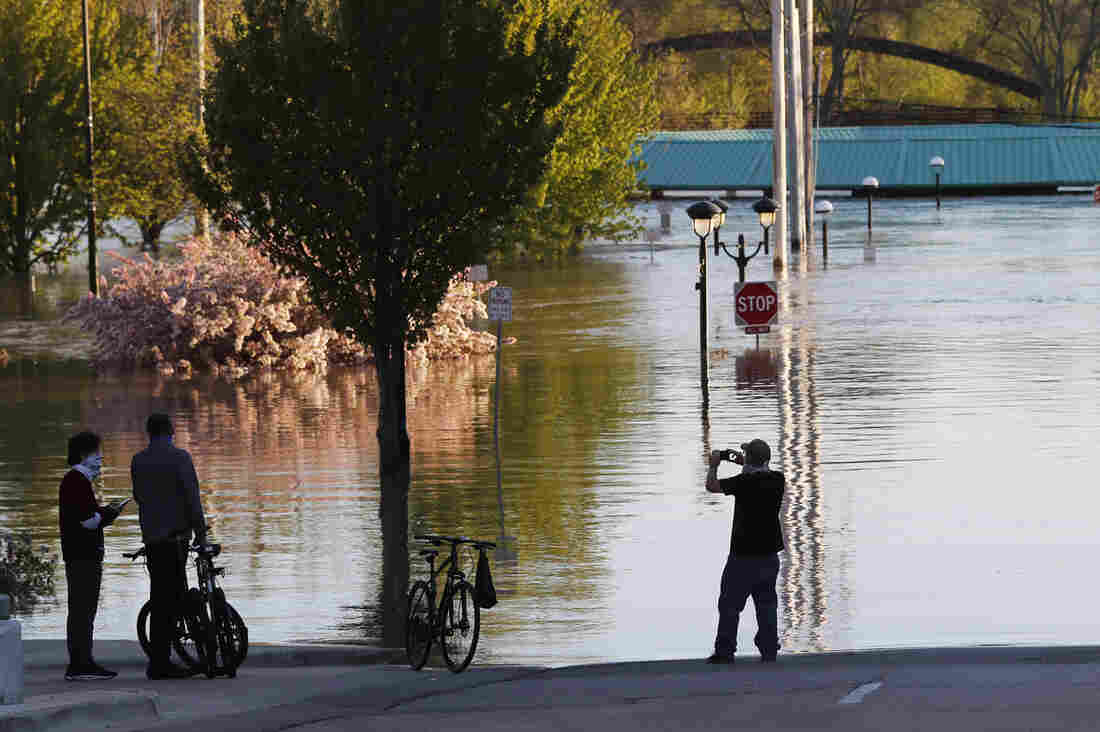 People photograph the floodwaters of the Tittabawassee River that encroached on downtown Midland, Mich., on Wednesday. Floodwaters have overtaken dams and forced the evacuation of about 10,000 people from communities in central Michigan. Carlos Osorio/AP hide caption 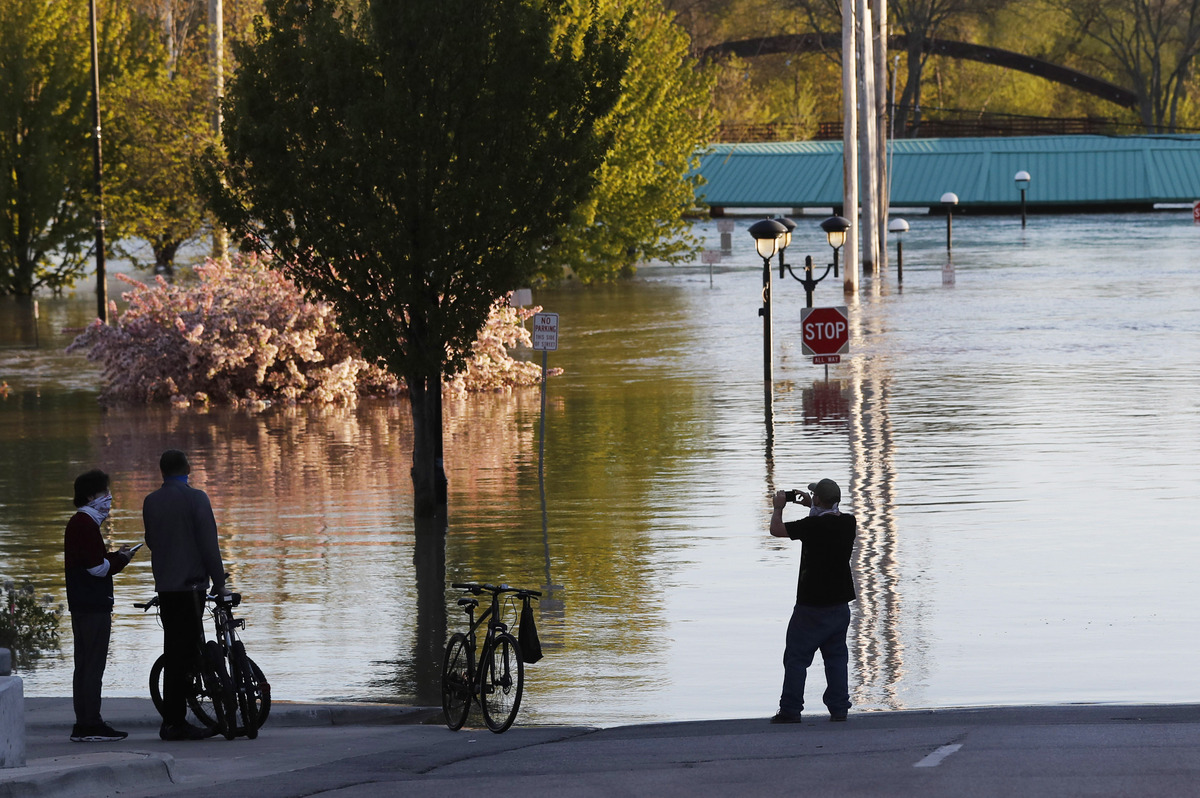 People photograph the floodwaters of the Tittabawassee River that encroached on downtown Midland, Mich., on Wednesday. Floodwaters have overtaken dams and forced the evacuation of about 10,000 people from communities in central Michigan.

Thousands of residents in central Michigan have been forced to evacuate their homes after rapidly rising waters from the Tittabawassee River following two dam failures threatened to flood parts of Midland County under as much as 9 feet of water.

The ongoing flooding is projected to be "historic," Gov. Gretchen Whitmer said.

She also said there would be an investigation into the dam operators, adding "the incredible damage requires that we hold people responsible." She vowed the state will pursue "every line of legal recourse that we can."

The National Weather Service called the flooding event "extremely dangerous" as a result of "catastrophic failures at the Edenville and Sanford dams," roughly 140 miles north of Detroit.

It added that "life-threatening flooding" will continue Wednesday. Midland County authorities said a flood warning was in effect in the county through Thursday.

Read our latest update on the actions we are taking to ensure the safety and security of our employees, community and the environment in response to the flood event in Michigan. We will share more information here as it becomes available. pic.twitter.com/NL2x5P8c0A

Dow Chemical, which is headquartered in Midland, confirmed in a statement earlier in the day that flood waters were "commingling with on-site containment ponds." The company said it immediately worked with the U.S. Coast Guard to activate emergency response plans.

The company said the commingling "does not create any threat to residents or environmental damage." 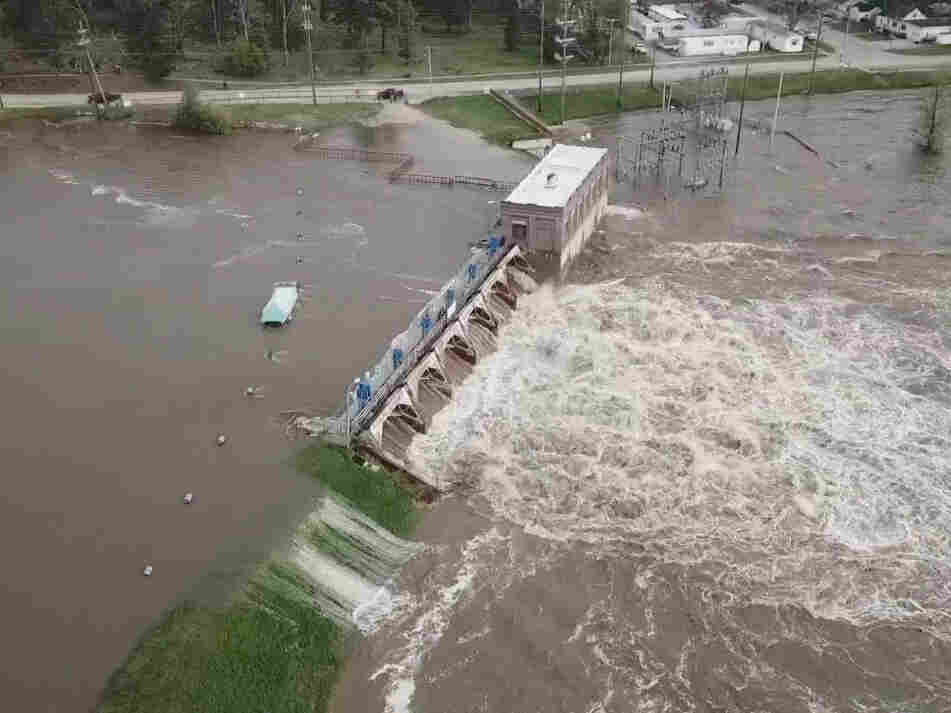 Water overruns the Sanford Dam in Michigan on Tuesday. The National Weather Service called the flooding "extremely dangerous" and said it was caused by "catastrophic failures" at two dams. TC Vortex via Reuters hide caption 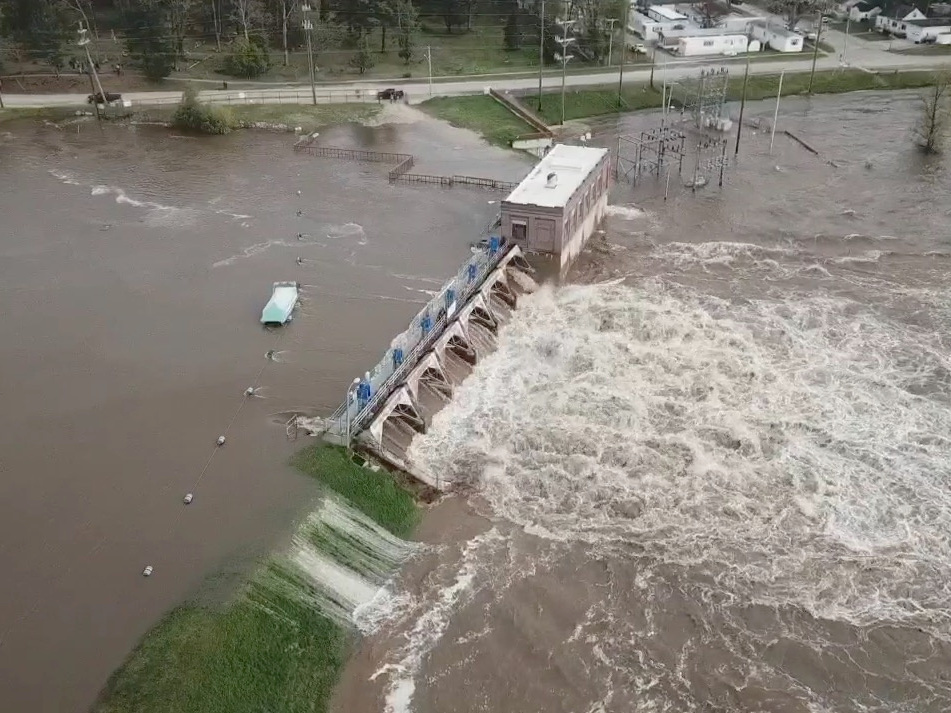 Water overruns the Sanford Dam in Michigan on Tuesday. The National Weather Service called the flooding "extremely dangerous" and said it was caused by "catastrophic failures" at two dams.

In a Wednesday afternoon briefing at Midland High School, one of the emergency shelters in the affected area, the governor gave a blunt assessment of the damage she saw from an aerial tour.

"What I can tell you is what you already know, you've seen from the pictures — it's devastating," Whitmer said.

She spoke of the unprecedented nature of the dual crises she is overseeing – the floods and the fight to halt the spread of the coronavirus.

"I feel like I've said this a lot over the last 10 weeks, but this is an event unlike anything we've seen before," the governor said. "We've got to continue to work together, to observe best practices to help one another, and to wear our masks and continue to try to social distance in this moment."

She added that COVID-19, the disease caused by the coronavirus, is present in 79 of 83 Michigan counties. "So we've got to continue to take this seriously."

Michigan State Police, the state's National Guard and local emergency first responders worked throughout the night to help people get to shelter, the governor said.

President Trump said Wednesday his administration is keeping an eye on the developments there, tweeting, "Stay SAFE and listen to local officials."

My team is closely monitoring the flooding in Central Michigan – Stay SAFE and listen to local officials. Our brave First Responders are once again stepping up to serve their fellow citizens, THANK YOU!

The Michigan Department of Transportation warned of flooding on several state roads. At midday Wednesday, the department sent out 22 alerts including notifications of flooding across "all lanes" or freeway ramps in Macomb, Saginaw, Midland, Benzie, Arenac and Clare counties.

One video posted to Twitter from Sanford, Mich., shows floodwaters as high as some first-floor windows and vehicles nearly submerged.

Made it to the heart of Sanford. Upside-down cars, collapsed building and the water is still flooding down the main Street. @Local4News #michiganflood pic.twitter.com/v3LQs5A5yw

NBC affiliate WILX reported that a bridge in the city of Midland had collapsed and thousands of Midland residents were without power.

During a Tuesday evening briefing, Whitmer urged residents in Midland County to get to safety immediately and ordered evacuations. She also declared a state of emergency for the county.

"Please get somewhere safe, now," the governor urged. "In the next 12 to 15 hours downtown Midland could be under approximately 9 feet of water. We are anticipating a historic high water level."

.@GovWhitmer declared a state of emergency for @midlandcountymi after the Edenville & Sanford Dams breached. “If you have not evacuated the area, do so now and get somewhere safe,” said Gov. Whitmer. “This is unlike anything we’ve seen in Midland County." https://t.co/hMmN5QBdlQ https://t.co/oC3YzKv8Ls

Michigan Radio reported the dam failures were caused in part by several inches of rain earlier in the week, leading the Tittabawassee River to swell.

"The city of Midland is bracing for the worst," the member station reported. "Midland has evacuated 10,000 people, along with patients in the city's hospital. Residents of Sanford, Edenville and other communities have also been forced from their homes."

Midland City Manager Brad Kaye told the station that this flood could be worse than a major one 34 years ago.

"The 1986 flood that most people remember, that were here at least, or if you weren't here, you certainly heard about it, was a 100-year flood," Kaye said. "What we're looking at is an event that is the equivalent of a 500-year flood."

Nearly two years ago, officials from the Federal Energy Regulatory Commission revoked the license of Edenville Dam, one of the two compromised dams at the center of the Michigan flooding, the Detroit Free Press reported.

In a statement to NPR Wednesday evening, FERC Chairman Neil Chatterjee said the primary concern is the safety of the residents in impacted areas. But added that Wednesday morning it directed dam operators Boyce Hydro Power, LLC, to open an investigation into the breach.

"When it is appropriate and safe to do so, FERC will send a staff engineer to the site to assist with the investigation. The Commission pledges to work closely with state officials and coordinate our investigatory efforts wherever possible," Chatterjee said.

Trump is expected to travel to Michigan on Thursday to tour a Ford Motor Co. plant that is making ventilators to help in the fight against the coronavirus.

Roughly seven minutes after his "Stay Safe" tweet to the state, Trump tweeted again, seeming to renew the ongoing feud with Whitmer over each other's handling of the coronavirus pandemic.

Whitmer has framed the federal government's response as inadequate. Trump has accused the governor of imposing restrictions that are too strict.

We have sent our best Military & @FEMA Teams, already there. Governor must now “set you free” to help. Will be with you soon! https://t.co/cuG1YacPdx

"We have sent out best Military & @FEMA Teams, already there. Governor must now 'set you free' to help. Will be with you soon!" Trump said.

Michigan has been one of the hardest-hit states from the pandemic. As of Tuesday, state authorities have confirmed more than 53,000 cases of the coronavirus and more than 5,000 deaths related to COVID-19.