Accessibility links
Neither Flood, Nor Fire, Nor Virus Shakes The Virtual Calm Of 'Minecraft' A non-gamer discovers peace in the pixelated world of Minecraft, where the horizon stretches on forever, and while there may be zombies, spiders and skeletons — there are also ways to fight them.

Neither Flood, Nor Fire, Nor Virus Shakes The Virtual Calm Of 'Minecraft'

Neither Flood, Nor Fire, Nor Virus Shakes The Virtual Calm Of 'Minecraft' 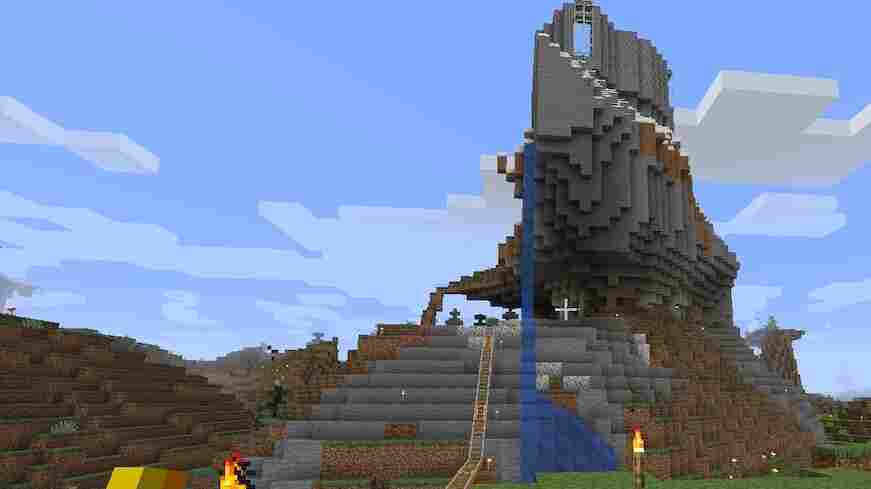 When the real world seems too constrained, the endless horizons of Minecraft can be soothing. Kathryn Fink hide caption 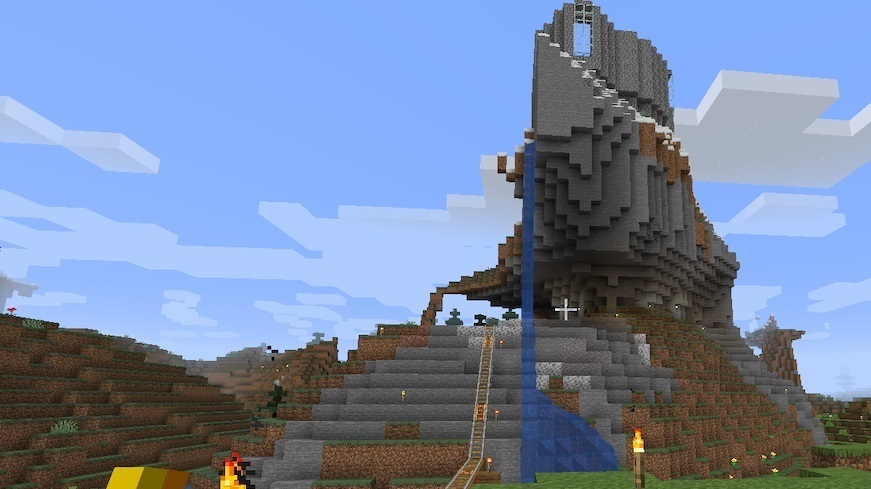 When the real world seems too constrained, the endless horizons of Minecraft can be soothing.

"Honey, I'm going out for an adventure!"

E. closes the door behind him and steps out into the world. I stay put, cooking up ideas for home improvement.

We've only known each other for a few months, but once the pandemic threw our lives off balance, we decided to move in together. In a house we built. In Minecraft.

The house is modest — a pixelated, underground starter home made of dirt and cobblestone. In one corner is a large chest for storing our inventory. Nearby, a crafting table and a stove convert raw materials into something useful. There's a bed for our re-spawn location, which means I won't get lost the next time I drown or get blown up by a creeper — a recurring issue early on. And on the opposite wall, there's a pen of clucking chickens. On second thought, not the best place for the chickens.

Later, we'll upgrade to a multi-story castle atop a mountain — but for now, it's home.

Right now, my life's parameters are my bedroom, my ambitions are the size of 80 bedrooms, and my Minecraft realm is the size of a zillion bedrooms.

Downloading Minecraft wasn't my first instinct when I stopped going to my office and everywhere else. I've never self-identified as a gamer in my adult life, and I certainly didn't think the antidote to screen fatigue could be more screen time. Plus, video games always struck me as chaotic, and I was maxed out on chaos.

As kids, my older brother and I would settle into an afternoon of Tekken 4 or James Bond 007: Nightfire, battling enemies and each other on an otherwise calm day. It was thrilling, and I'd ride that anxious buzz of trying to survive until it was time for something else. It's strange how much you can learn about yourself as a child when your avatar is a buxom woman named Pussy Galore. I discovered I only really had fun when my brother and I were on the same team, and friendly fire was turned off. I noticed that random civilian casualties made me feel sick. I questioned why lady avatars were scantily clad while dude avatars often weren't. And I loved getting to sight-see.

Sightseeing is why Minecraft has had such an impact. Right now, my life's parameters are my bedroom, my ambitions are the size of 80 bedrooms, and my Minecraft realm is the size of a zillion bedrooms. The game offers endless virtual space to roam when real-life space feels like a rare commodity. And relocation is the literal click of a button. When I tire of the mines, I try the mountains. When I'm done with the mountains, I go to the jungle. And when I've had it with the jungle, I hop in a boat that I made with oak from the jungle and find a new island to inhabit. Then I can do it all over again. The game's natural world is artificial, but there's something kind of enchanting about that block-shaped moon overhead.

The Cubist Revolution: Minecraft For All

Offline, my weeks have been punctuated with worry about the strain I'm putting on my household's resources. But Minecraft promises a retreat where raw materials are always plentiful and useful — water for putting out lava, iron for swords and pickaxes, cobwebs for string, animals for food. Neither climate change nor a pandemic can threaten this virtual cornucopia. Lately, I've discovered an affinity for running through open fields and punching grass. The satisfying crunching sound leads me to five-minute punching sprees from time to time, but this isn't nihilism. It's practical. Every few squares of freshly punched grass unearth little seeds that keep my chickens procreating and my farm plentiful. It's a blissed-out vision of sustainability.

Let's be clear, though: Minecraft is not a utopia. Days whiz by, and when that 32-bit block of sun starts to set, monsters are coming for me. In the mines, too. Exploding creepers, arrow-toting skeletons, mumbling zombies, nimble spiders, and mystifying enderman you can't make eye contact with. I'm not very good at fighting these yet, but at least I can count on the game's sonic and visual cues to let me know danger is afoot. Plus, I'm armed for battle. There are rules and boundaries within which I can almost guarantee safety. And if all else fails, I'll come back to life in the same place I started: My bed, in my simple underground house, out of harm's way.

I can't say the same of the coronavirus.

These days, I'm clinging to structure. Time is passing quickly, and if I'm honest, I don't always yearn to make days feel longer or fuller. But when I close my bedroom door and open up a virtual world, I can feel the therapy of making things up as I go. Of itching for daylight so I can return to feeding chickens and building a castle on a mountain. Of experiencing something — making actual memories — when togetherness feels out of reach.

Kathryn Fink is a producer for 1A. She's a native of Virginia, a new gamer, and an unapologetic lit nerd. She tweets at @finkcommakath.