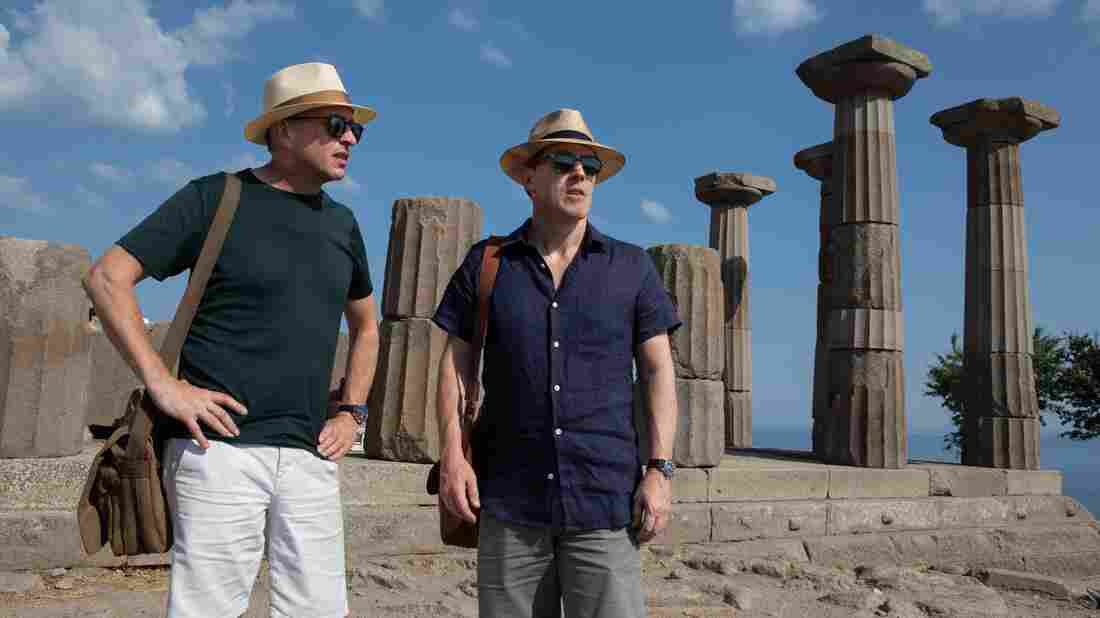 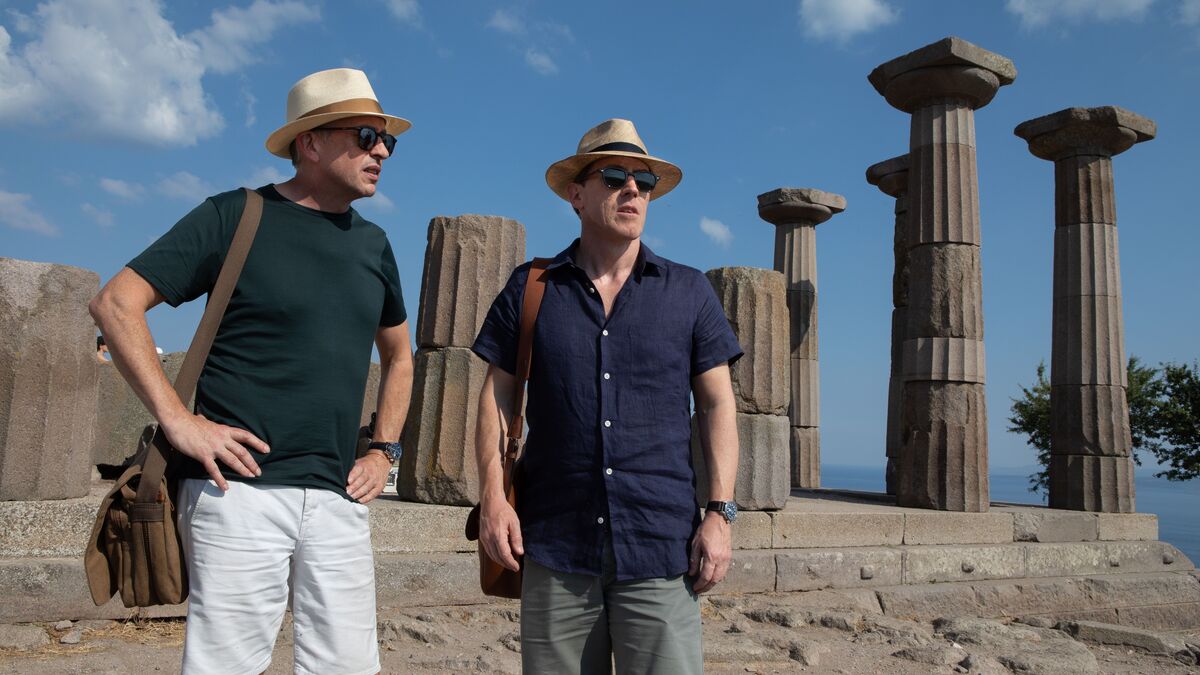 Actor-comedians Steve Coogan (left) and Rob Brydon (right) play coyly fictionalized versions of themselves in The Trip to Greece.

At a time when many of us are staying home, with no plans to travel farther than the nearest grocery store, watching The Trip to Greece might seem like either a lovely escape or an exquisite form of torture.

The movie — or rather the original six-episode TV series it was edited down from — was shot before the COVID-19 pandemic. And so much of what we see — tourists climbing aboard ferry boats and sharing meals in Michelin-starred restaurants — plays like a time capsule from a world that has temporarily ceased to exist. Viewer envy is par for the course with any good cinematic travelogue, but The Trip to Greece didn't just make me jealous; it left me feeling weirdly bereft.

I enjoyed the ride anyway, and you probably will too. If you've seen any of the earlier Trip movies, you'll know what to expect. The actor-comedians Steve Coogan and Rob Brydon, playing coyly fictionalized versions of themselves, have already wined and dined their way through England's Lake District, Italy and Spain.

This time they're starting in Turkey and making their way through Greece, spending six days retracing Odysseus' famous voyage home. As usual, one of them is filing freelance dining reviews for a newspaper, which explains the many stops at high-end eateries, where every amuse-bouche is as lovingly photographed as the scenery.

But if you come for the gorgeous food and landscapes, you stay for the quick-witted banter and the virtuoso celebrity impersonations. As usual, Coogan and Brydon live to perform, and their never-ending one-upsmanship is what makes them such enjoyable, if also exhausting, company.

Coogan, the BAFTA-winning actor from movies like Philomena and Stan & Ollie, is the bigger star of the two, and therefore the bigger target. Brydon, a saucy sidekick, clearly enjoys puncturing his friend's thin skin. At one point, he flatters Coogan by telling him he's starting to look like Richard Gere, then turns around and dings him for lapping up the compliment.

Still, 10 years have passed since the first Trip and both men, now in their 50s, are starting to mellow with age. They seem a bit more willing to enjoy each other's company and even laugh at each other's jokes.

I wasn't crazy about Coogan and Brydon's previous outing, The Trip to Spain. The comedy sometimes curdled into sourness and the actors' back-and-forth seemed to reach a dead end. But The Trip to Greece is an altogether pleasant return to form. The jokes are sharper and tighter, and those impersonations are especially first-rate. Sadly, neither man trots out Michael Caine this time around, though we do get Sean Connery, Mick Jagger and an especially inspired Dustin Hoffman.

Early on, Brydon fittingly quotes from Aristotle's Poetics: "Imitation comes naturally to human beings, and so does the universal pleasure in imitation." It isn't the only classic text that gets referenced here. After all, Coogan and Brydon are basically living their own version of The Odyssey, establishing a resonant metaphor about the journeys we take out into the world and the journeys that lead us back home.

There's always been a glimmer of melancholy beneath the idyllic surface of these movies. We've seen these characters deal with setbacks in their careers and relationships, usually on the sidelines, in between sips of wine and bites of haute cuisine. Futility and disappointment are nothing new for them. But The Trip to Greece gets at something even more painful and direct: a sense of encroaching mortality.

Coogan's dad is in poor health, which may be why he's been having strange, troubling nightmares. Other real-world concerns undercut the blissful mood: On the island of Lesbos, Coogan runs into an actor he appeared with years ago and gives him a ride to the nearby refugee camp where he now works — a moment that throws their privileged existence into stark relief.

Given the present state of the world, it's easy enough to sneer at that privilege. But The Trip to Greece doesn't scold our heroes for their extravagances, and it doesn't scold us for enjoying them vicariously. This is a movie that knows that pleasure can be a vital consolation in times of suffering, but it also knows that pleasure is often all too fleeting. Coogan and Brydon have said this will be their last Trip and, if so, they've found a perfect, poignant note on which to end. But personally, I hope we haven't seen the last of this squabbling, endearing duo — or heard the last of their Michael Caine.