Accessibility links
Not My Job: We Quiz Astronaut Christina Koch On Cyberspace Christina Koch is a space pioneer — she holds the record for the longest time a woman has been in orbit. We quizzed her on another kind of space. 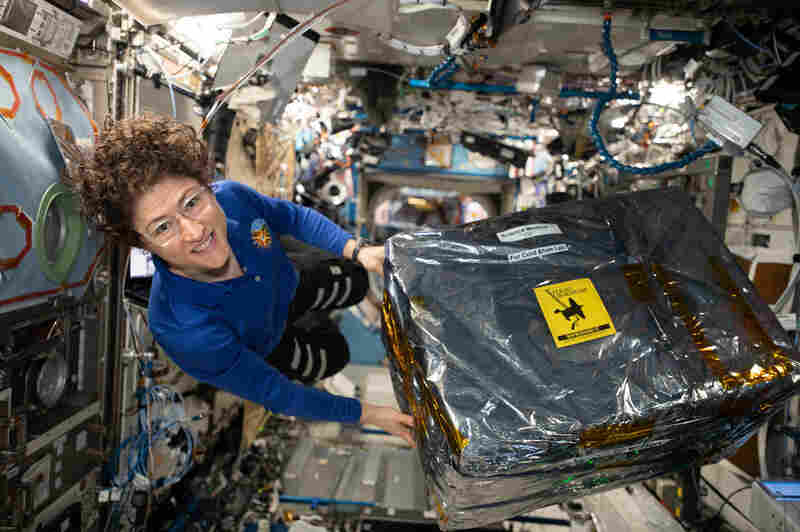 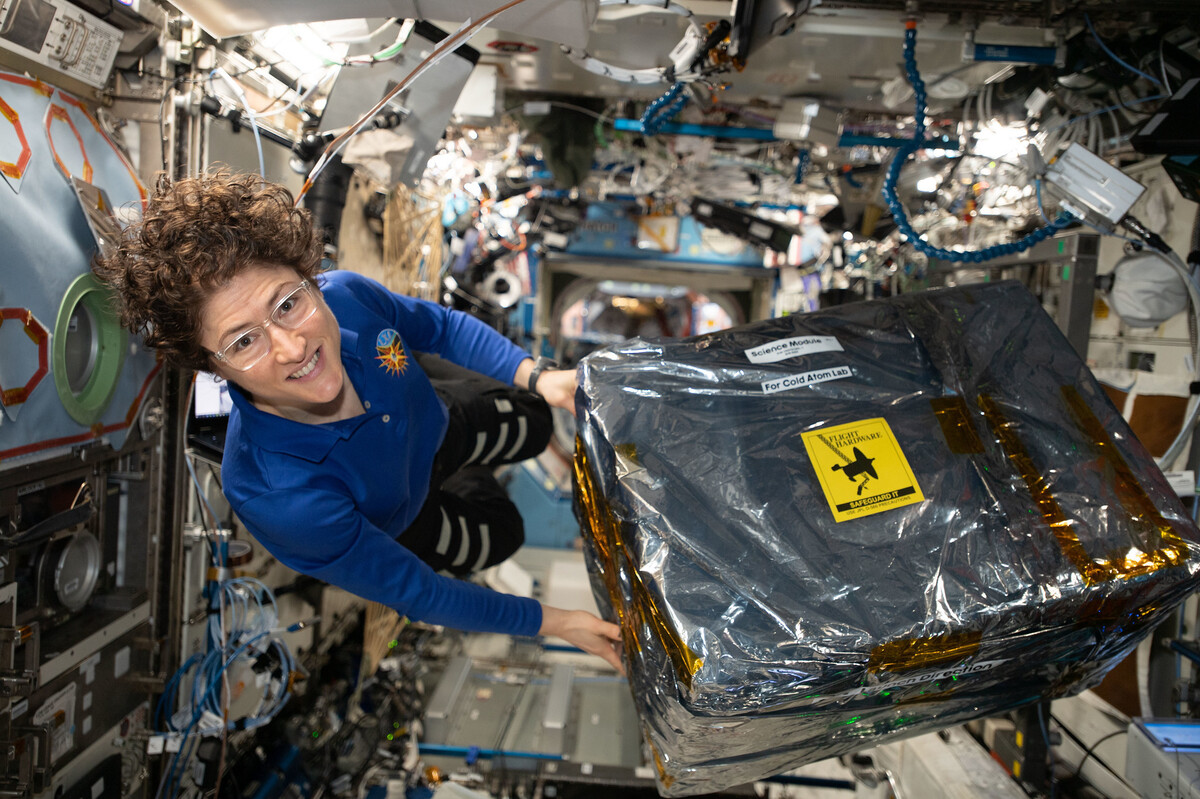 Christina Koch is a space pioneer: She holds the record for the longest time a woman's been in orbit — and she was part of the first three all-women spacewalks. So, we've invited her to play a game — on another kind of space — called "Suit up for a walk in Cyberspace!

And now the game where people who have flown very high are dragged back to Earth with the rest of us. We call it Not My Job. Christina Koch is a space pioneer. She holds the record for the longest time a woman has been in orbit, and she was part of the first three all-women spacewalks, which coincidentally were also the first spacewalks in which one of the astronauts did not explain to the others something that person already knew.

CHRISTINA KOCH: Hello. It's great to be with you.

SAGAL: It's great to be with you. Now, you did, in fact, set a bunch of records. You did the first - you were half, exactly, of the first all-women spacewalk. And you also set the record for a woman staying in space, right?

SAGAL: Three hundred and twenty-eight days - and you came back just in February.

KOCH: Yep - the beginning of February.

SAGAL: Right. So about your timing - did you...

SAGAL: It occurs to me, though, that as unlucky as your timing might be in coming back to the planet, you probably are the greatest living expert, along with one or two other astronauts, with how to survive for a long time being stuck in the same place. So do you have any tips for us - the rest of us who are new to this particular challenge?

KOCH: You know, I definitely got through with a lot of, you know, kind of mental strategies, focusing on what you have rather than what you don't have, and, you know, all the things, the unique things, that you're going to be missing one day. But I think in the end, I've sort of learned since I've been back that the actual way to get through it is just to inherently be a homebody and...

KOCH: ...To just - yeah. That turns out to be that the best way to get through it as an astronaut and during stay-at-home on Earth, too.

SAGAL: So where are you now - your home in Houston? Who are you quarantining with?

KOCH: My husband and our dog.

SAGAL: You were away from your husband for almost a year. And now you're stuck inside with him 24/7. That's an interesting transition.

KOCH: It was. Yeah. And then, of course, the year in training before my flight, where I was living in Russia almost constantly - so yeah, about two years apart to 24/7 together. It has been interesting. You know, it's good opportunity to, you know, reintegrate in your home life and with people you love.

KOCH: So it's a good thing.

ALISON LEIBY: I feel like I want relationship advice from you just because of that...

LEIBY: ...But also because, like, I don't know. You've been in space. You know what it's like to be with something, like, unwelcoming and cold and distant, you know, and I could use that.

KOCH: Well, we try to stay out of the unwelcoming...

KOCH: ...Cold and distant and vacuous part. We try to stay in...

SAGAL: Stay away from that. I was reading about the fact that when they did the first astronaut - the first space program, they actually put some women through the same kind of tests, and they found out that women were better able to handle the stress associated with spaceflight than men. Do you think that's true?

KOCH: Yeah, the Mercury 13. Yeah, I've read a lot about those women. They're some of my heroes. And, you know, I would say that I didn't notice any differences up there. I got to fly with men and women, and I think everyone handles it about the same. I will tell you, we get asked a lot where things are up there, too.

SAGAL: Oh, do you really?

SAGAL: I'm sorry. I didn't want to indulge in any terrible...

SAGAL: I mean, is it like at my house, where I don't know where anything is, and my wife knows where...

KOCH: It is absolutely like that. And I did get some calls from my husband...

KOCH: ...Asking where things were in our house in Houston. And...

SAGAL: ...For almost a year, and he's still calling you because he can't find his car keys?

KOCH: The printer paper was a big one.

KOCH: That one I knew right away. Yeah.

SAGAL: You did the - you participated in the first - yes, all-women, both-women spacewalk. It hadn't been done before. And famously, you tried it, but it didn't work because they didn't have a space suit that fit one of you correctly. Is that right?

KOCH: Yes. It fit, but it was kind of not the best size ever, and we decided it'd be better to do it with someone who had a space suit that was kind of just the right fit.

LEIBY: Also, shopping is even hard when you're an astronaut. This is not making me feel good as a woman.

KOCH: I had to actually get a spacesuit just to get some pockets in the pants of my outfits, so...

SAGAL: How - I've - one thing I've learned about NASA is they check and double-check everything. It's all about checklists and safety precautions. How could they send up the wrong-sized spacesuit for your spacewalk?

KOCH: (Laughter) Well, all the spacesuits are already up there, so it's just a matter of configuring it - kind of getting it ready. And time is always of the essence there, you know, and there's never enough time to do everything that you want to do. So unfortunately, yeah, it just didn't get configured in time.

BILL KURTIS: Peter, can I jump in with just one question? Christina, what was the most beautiful thing you saw? I know the blue ball of Earth...

KOCH: Definitely. The Earth is beautiful. Some of my favorite scenes were, one, looking down at my home. That's an incredible thing - just to see where you're from and where you've lived kind of on that backdrop of the universe. And then the other for me was seeing the northern lights and the southern lights on the Earth from above. I used to work in Antarctica, so I saw them a ton from below, and so just to see that kind of on a planetary scale is pretty amazing.

JOBRANI: Did you ever look out and go, what is that? I don't know what that...

KOCH: (Laughter) No, sadly. I'm going to have to come up with a better story for that. But no, nothing was out the window.

SAGAL: Christina Koch, I don't know if you're glad you came back, but we're glad you did, so we could talk to you. And we have invited you here to play a game that this time we're calling...

KURTIS: Suit Up For A Walk In Cyberspace.

SAGAL: You've been to space, so we thought we'd ask you about cyberspace, which is what we used to call the Internet. Get 2 out of 3 questions about the very earliest days of the Web correct, and you'll win a prize for one of our listeners - any voice they might like from our show. Bill, who is Christina Koch playing for?

SAGAL: So here's your first question. You ready for this?

SAGAL: OK. Though online shopping has pretty much become universal, it had to start somewhere. Which of these was the first known instance of a use of e-commerce? It happened back in 1972. Was it, A an Internet bulletin board user offering candid photos of President Nixon - or, as they called them, Dick pics; B, an advertisement for a, quote, "aura-cleaning service;" or C, Stanford students using it to buy weed from kids at MIT?

KOCH: (Laughter) All of those answers are tough. I'm going to go with B.

SAGAL: You're going to go with B, an advertisement for a, quote, "aura-cleaning service" - because it was 1972, and that's what we did back then.

KOCH: (Laughter) You know, now that you mention it, maybe I'll go with C.

SAGAL: ...Christina. They arranged this extraordinary futuristic computer network, and one of the first things the kids at Stanford did is they arranged a shipment of pot from Boston. You've got to love that kind of initiative.

All right. Second question - you've probably heard that eBay was started in 1995 to sell the founder's collection of PEZ dispensers. That is not true. It's an urban legend. What was really the very first thing the founder of eBay sold on his brand-new site? Was it, A, a collage made entirely of dryer lint; B, four pounds of lard; or C, a broken laser pointer?

KOCH: Wow. That's quite a way to launch a business. Let's go with A.

SAGAL: A, a collage made entirely of dryer lint.

KOCH: (Laughter) I meant B.

SAGAL: Four pounds of lard? No, it was actually C, the broken laser pointer.

OK, last question. If you get this right, you win it all. The Internet is ubiquitous today, but early in its history, people weren't entirely impressed. In fact, the Internet lost out on the U.K.'s prestigious Queen's Award for Technical Achievement (ph) to which of these? Was it, A, the keytar; B, those sunglasses that darken automatically when you go outside; or C, the little plastic ball in a can of Guinness?

SAGAL: I perhaps should have stressed that this was the U.K.'s prestigious Queen's...

KOCH: It was probably C, then.

SAGAL: It was the little plastic ball that keeps Guinness fizzy in the can - because that - really, when you think of it, what's made our lives better, canned Guinness or the Internet?

SAGAL: Bill, how did Christina Koch do on our quiz?

KURTIS: Christina, you've got the right stuff. Two out of 3 is a win.

SAGAL: Well, Christina Koch, what a pleasure to talk to you. Christina Koch is an engineer and astronaut who spent almost a year aboard the International Space Station.

Christina, you're a pioneer. We're honored to talk to you. Thanks for joining us on WAIT WAIT... DON'T TELL ME.

KOCH: Thank you so much. It was my pleasure.

SAGAL: In just a minute, we're all Slytherin in our Listener Limerick Challenge. Call 1-888-WAIT-WAIT to join us on the air. We'll be back in a minute with more of WAIT WAIT... DON'T TELL ME from NPR.