Accessibility links
After Months of Steep Declines, Air Traffic Is Picking Up The airlines have lost billions of dollars in revenue with virtually no demand during the coronavirus pandemic. Now they are seeing more bookings despite concern from passengers. 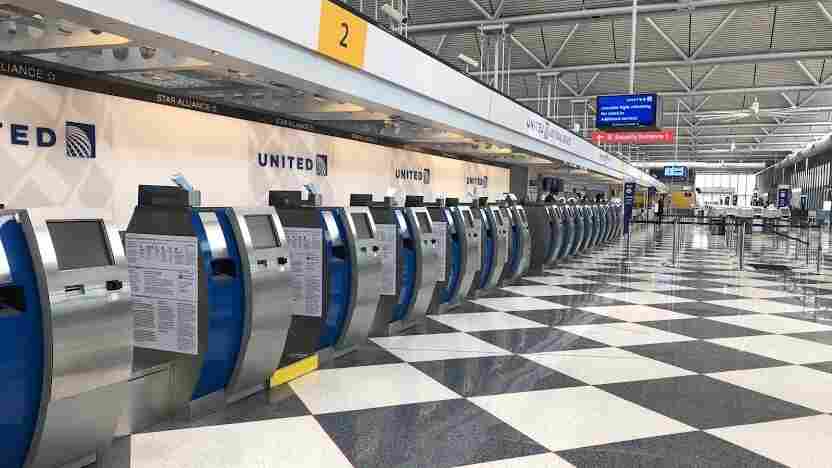 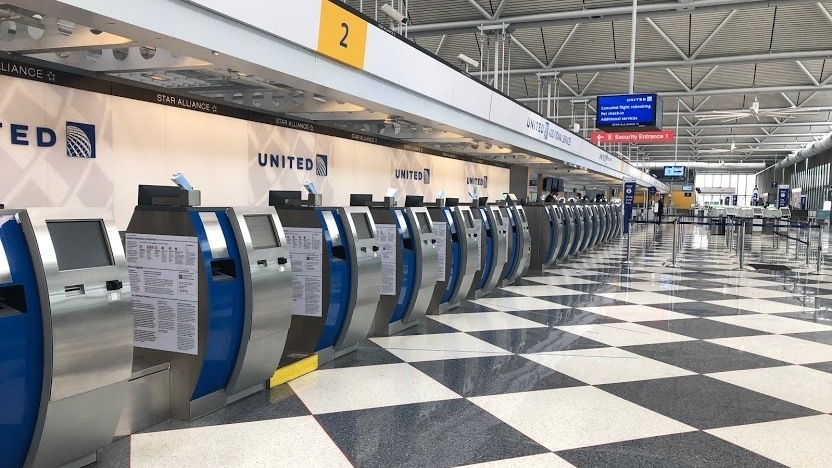 An empty terminal at Chicago's O'Hare International Airport. The normally bustling check-in at the United Airlines terminal was eerily quiet on April 24.

The summer travel season is kicking off this year with more uncertainty than any time in recent memory. The coronavirus pandemic has led millions of people to cancel vacation and travel plans. Airlines have lost billions of dollars in revenue, flying nearly empty planes and canceling tens of thousands of flights.

The U.S. Travel Association said more than half of the industry's 15.8 million workers have lost their jobs, and the group forecasts spending on travel this holiday weekend will be about a third of last year's levels — $4.2 billion versus $12.3 billion in 2019.

"Our national economy is in a recession, but the travel industry is already in a depression," U.S. Travel Association President and CEO Roger Dow said in a news release. "Travel-related businesses have been hit disproportionately hard by the pandemic's fallout, and unfortunately our workforce is on the front lines of that struggle."

The uncertainty is so great, that for the first time in 20 years, AAA is not providing a forecast of how many people will be traveling over the Memorial Day weekend, traditionally the start of the summer vacation season. The organization said that "the accuracy of the economic data used to create the forecast has been undermined by COVID-19."

Last year, 43 million Americans traveled for Memorial Day weekend, the second-highest travel volume on record in the two decades AAA has tracked the data. But this weekend, travel volume will likely be a fraction of that. "With social distancing guidelines still in practice, this holiday weekend's travel volume is likely to set a record low," said Paula Twidale, senior vice president of AAA Travel.

Despite the dismal spring, there are signs that travel demand is beginning to tick up. In analyzing data from multiple sources, NPR finds signs that more Americans are not just looking to book future trips, but they're also boarding planes and starting to fly again.

The Transportation Security Administration reports 318,449 people were screened at its airport security checkpoints across the country Thursday; that's the highest number in two months. The last time the number of people screened topped 300,000 was March 23.

It's still 88% fewer travelers screened at TSA checkpoints than the 2.67 million screened on the Thursday before Memorial Day last year, but it's more than triple the number going through airports a month ago, on April 22, when fewer than 99,000 people went through TSA checkpoints.

The industry group Airlines for America says through much of April, the number of passengers flying each day dropped to lows not seen since the dawn of the commercial jetliner era of the 1950s. Airlines have parked more than half of their fleets as the number of planes in the air has plummeted from more than 26,000 domestic flights a day in mid-March to almost one-fifth that number in late April, according to the site Flightradar24.

And though the airlines are still reeling, burning through cash at a rate of tens of millions of dollars a day, business is now picking up. On May 15, airlines flew nearly 7,000 flights, and the number continues to rise.

Southwest Airlines reported this week that after a torrent of customers canceling travel plans in March and April, new bookings have outpaced cancellations in May. Delta Air Lines, United Airlines and American Airlines also reported increases in customers booking flights and fewer cancellations as they're beginning to add some flights for the summer months after drastically scaling back their schedules.

Third-party travel booking sites are seeing more people searching for and booking flights, too. Search demand for domestic flights on the the travel app Hopper dropped more than 60% in March and remained low through April and the first part of May. But in recent weeks, the number of travelers adding watches for trips they'd take within the next 30 days quadrupled from the April low.

"Right now, demand levels are still significantly lower than they were at the beginning of the year and even over the past 10 years," Hopper chief economist Hayley Berg said. "But there are strong, positive signals."

She said search traffic and a survey of travelers indicate many Americans, "especially from younger demographics, including millennials, [say] that they are interested in traveling this summer."

Hopper's recent survey finds nearly 75% of respondents in the U.S. said they do plan to travel this year, but not until they feel comfortable. The survey also finds more than 40% of Americans said they plan to travel by air this summer, with 25% planning to book their travel in the next month. 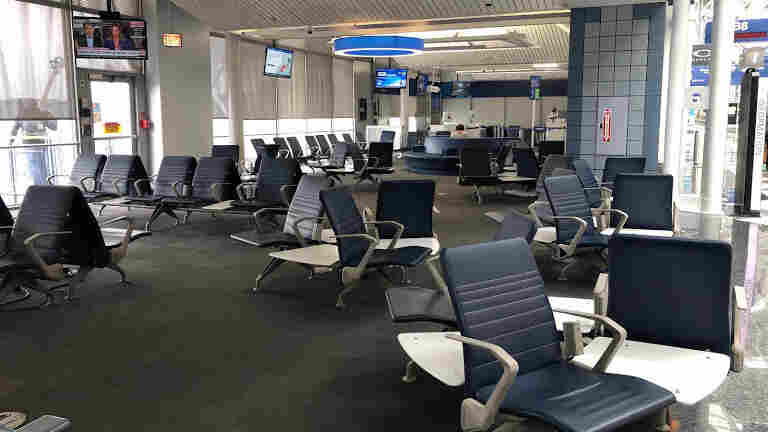 A rare sight at one of the world's busiest airports: empty gates at Chicago's O'Hare in late April. David Schaper/NPR hide caption 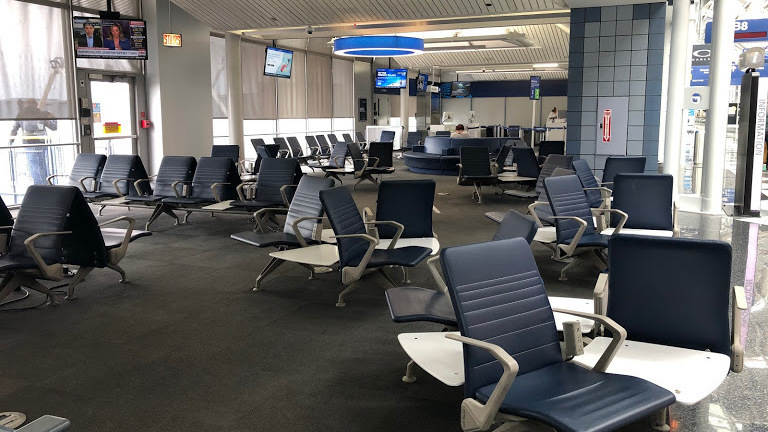 A rare sight at one of the world's busiest airports: empty gates at Chicago's O'Hare in late April.

"The demand is there, and I think that customers, especially those in the U.S., are looking for signals to decide when it is safe for them and when they do feel comfortable to start traveling again" Berg said, "and the hope is that will be this summer."

Nonetheless, the airline and travel industries are bracing for what is expected to be a long and slow recovery from the pandemic, and there are fears a resurgence of the virus in the fall could add more pain and misery to industries already suffering huge financial and job losses.