Accessibility links
What I Learned From Writing Letters To Strangers Across America Writing letters to strangers in almost all 50 states became an outlet to process anxieties about the pandemic. And a reminder of all the ways we are connected. 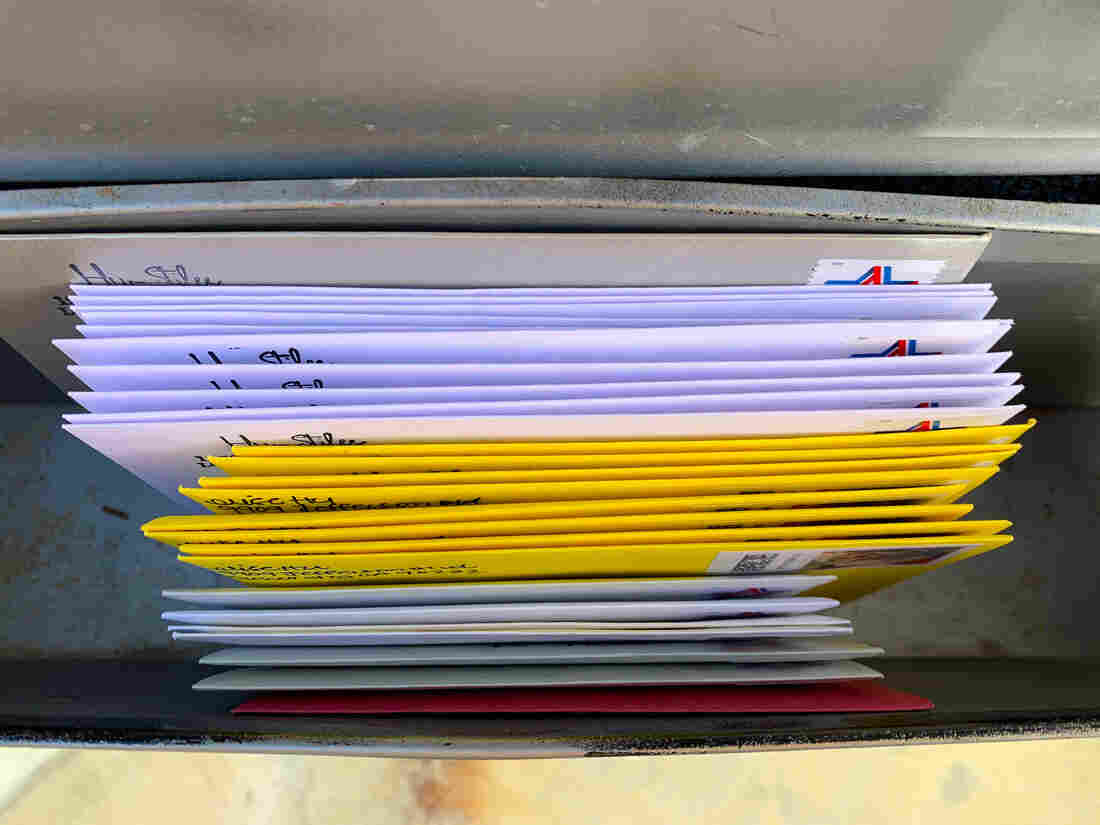 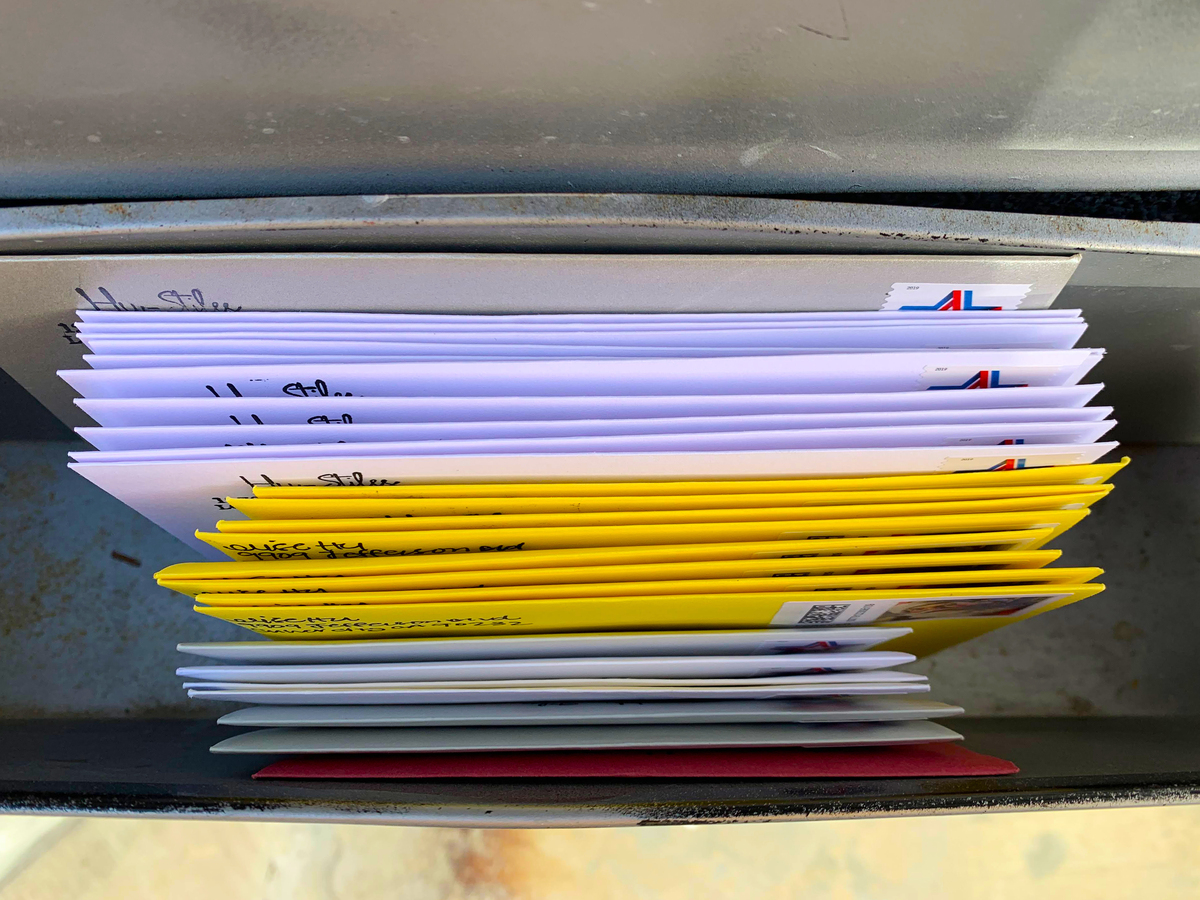 The first batch of handwritten cards and letters, awaiting USPS pickup in the mailbox.

A week into California's stay-at-home order, when our now-familiar mix of anxious, lonely and restless feelings were still brand new, I craved connection. But not the kind available from a screen. Inside my wallet I found 10 stamps leftover from the holidays, and I put out a tweet: "Today I am going to write letters to send through the post ... [Direct message] me your snail mail address if you want a random letter. But heads up I only have 10 stamps & they are of Santa."

On the first day, I wrote to strangers in Arizona, California, Missouri, New York, Texas and Washington. The next day, I wrote to an 11-year-old who was born in Plano, Texas, where I grew up. I wrote to a USPS letter carrier from Minnesota who requested a letter for himself. The 10 stamps ran out quickly, so I restocked. By the time I was finished sending an analog paper letter to anyone who requested one, I'd written 50 letters to addresses in every state except for Alaska and the Dakotas.

When they requested letters, people mentioned little bits about themselves: That they live in my old stomping grounds (Austin and St. Louis). They mentioned their kids or their pets. They mentioned listening to NPR when I broadcasted from Seoul. They mostly asked if it was too late to request a letter.

A handful of requests came from longtime friends. It tickled me that folks who can call me easily wanted this kind of expression of love, all the same. They — and the others — were clearly as eager to connect as I was, amid stay-at-home orders brought on by this disorienting global pandemic. 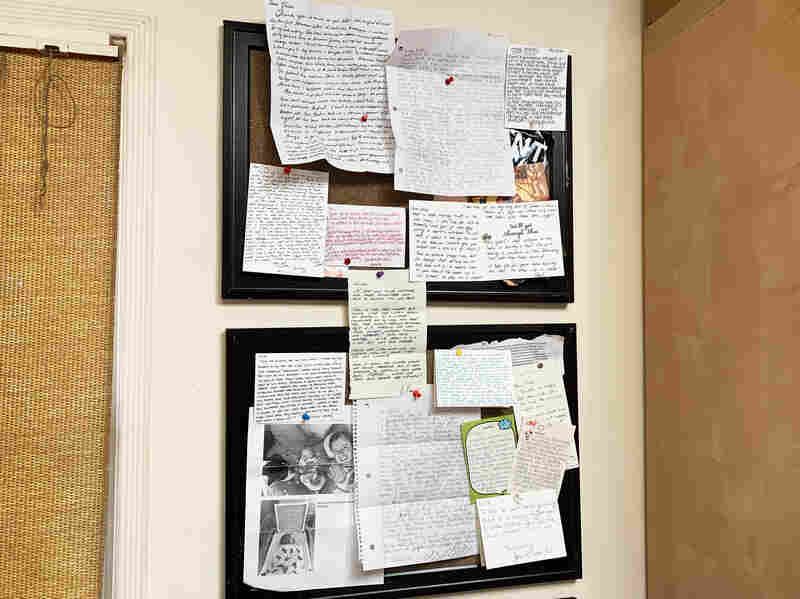 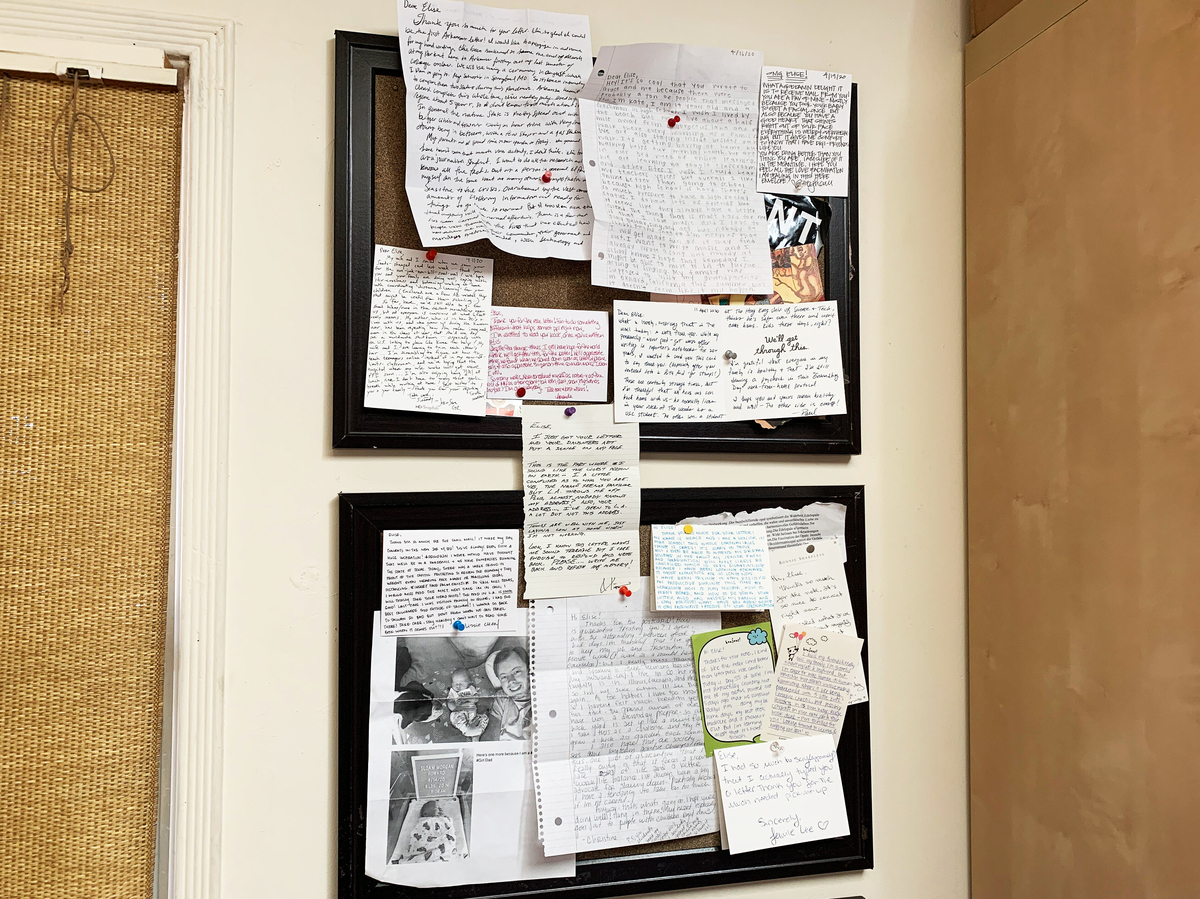 People wrote back, with kind and lengthy cards and letters.

These days, we're stripped to our most primal longings to survive. And survival for humans means connection and communion wherever we can find it. It might be especially crucial for my generation. A quarter of millennials said in a YouGov survey last year that they have no acquaintances; 27% reported having no close friends and 30% said they had no best friends. And that was before the crisis hit.

I am "very online," so it's obviously much easier reach far more than one person at a time with a tweet or an Instagram post. I could have simply sent personalized emails to everyone who asked. But the process of sitting down to compose a letter by hand, addressing an envelope and stamping it is infused with extra intention. It felt like a way to show an old-fashioned kind of caring, the kind that could pierce through the distance and approximate a hug.

I wanted to be explicit in signaling the letters came from a real human, and nothing automatic, so finding ways to personalize each one was key. When I ran out of my personal stationery, I found my four-year-old daughter Isa's doodles in a notebook and wrote my letters on those pages.

Our lives are upended, uncontrollable and contained by the walls of our homes. So when I wrote, I asked folks what their experience of this cocooning felt like. Were they scared and uncertain, like me? How did they fill their days? Find joy? I asked many people what they learned about themselves during this difficult period.

When stationery ran out, pages with my daughter's doodles sufficed.

I didn't share quotes or poems, as I sometimes do when I send cards or letters to friends. Instead, I wrote about the rhythms and happenings of my days. I wrote about Isa singing full-throated the entire time she was on the back of a tandem bike with her dad. I wrote about how happy my neighbors are to see each other, and how we delight in shouted conversations from across the street. I wrote about how lonely I feel, even though I'm quarantined in a house with my family, which includes the seemingly nonstop volume of my three small children. And I let them know how writing these letters filled up my emotional tank, even though we didn't know one another.

I never expected replies. The satisfaction for me was in writing to people and knowing they'd receive something weird and rare. But the replies ended up being the best part. When the recipients got them in the mail, some of them didn't wait to write back by hand. They sent me direct messages on social media with photos of themselves and the letters now in their possession.

Oscar in Santa Ana, Calif., said, "Handwritten anything is so special these days." Robert Howard in Austin quipped, "I got your note today in the mail and my wife was like, 'Someone named Elise wrote you from California ' and I was like, 'Oh [expletive], do I have a secret lover I don't know about?'"

He went on to tell me how he and his wife were three days out from the arrival of their baby, and that they were on their way to pick up Texas BBQ-Asian fusion takeout. 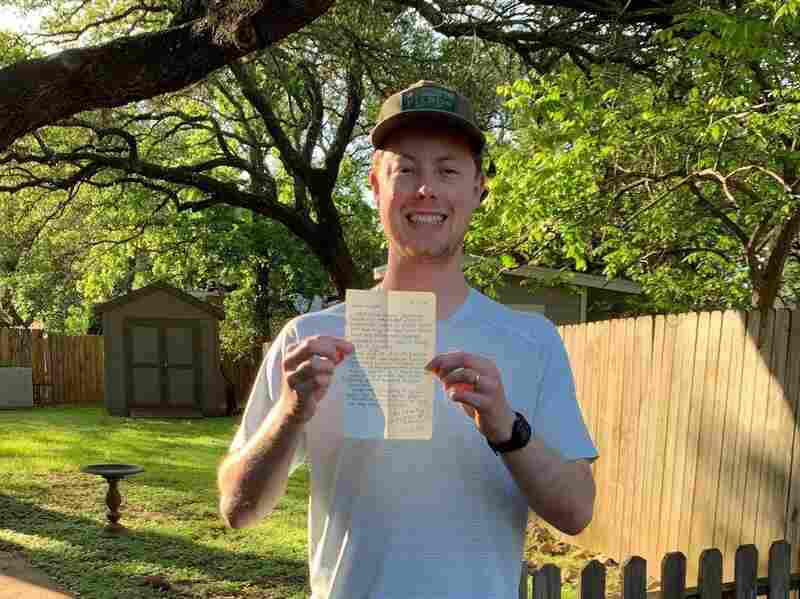 Robert Howard in Austin, with the letter I sent him. Molly Hammond hide caption 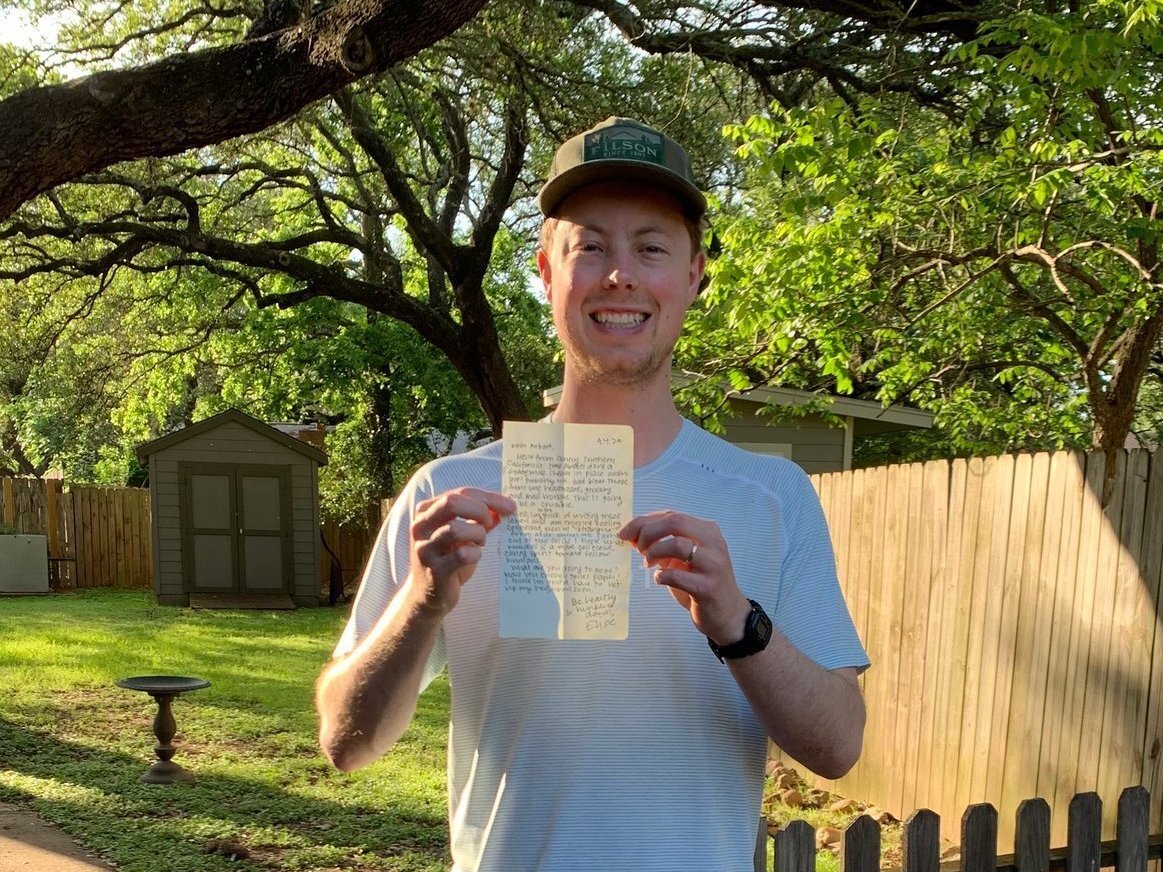 Robert Howard in Austin, with the letter I sent him.

In the following weeks, Howard sent a letter by mail with a photo of the new baby and a personalized koozie with his phone number on it. He said he read a book once in which the author asked, "What if we really loved our neighbor as ourselves?" The author put his phone number in the back of the book. Howard was inspired and emulated the move with his number on the koozie to "make myself available to people and the world feel smaller."

In addition to the tweeted and texted photos, I received dozens of handwritten replies. They came from Eldersburg, Md. And Kirkland, Wash. Tucson. Flushing, N.Y. Kearney, Mo. Fort Collins, Colo.

People wrote me about leaning into their hobbies and how they're spending their time — starting gardens, going on daily walks and sewing masks to donate to hospitals. Some of the replies were typed and printed out, with a Post-it note appended: "I ended up having so much to say, I typed it."

One couple from Arizona sent me, along with their letter, two national park brochures of the parks they live near, to help with my homeschooling of my children. A high school freshman wrote me back, sharing her love of playing guitar, singing and acting, but admitting no one at school even knows because "high school is hard. There's so much pressure to have a high social status."

A lot of letters included wishes for what comes out of this crisis. The one consistent hope was that the slower pace, deeper intention and attention we're paying to each other can continue in the next phase of our living history. 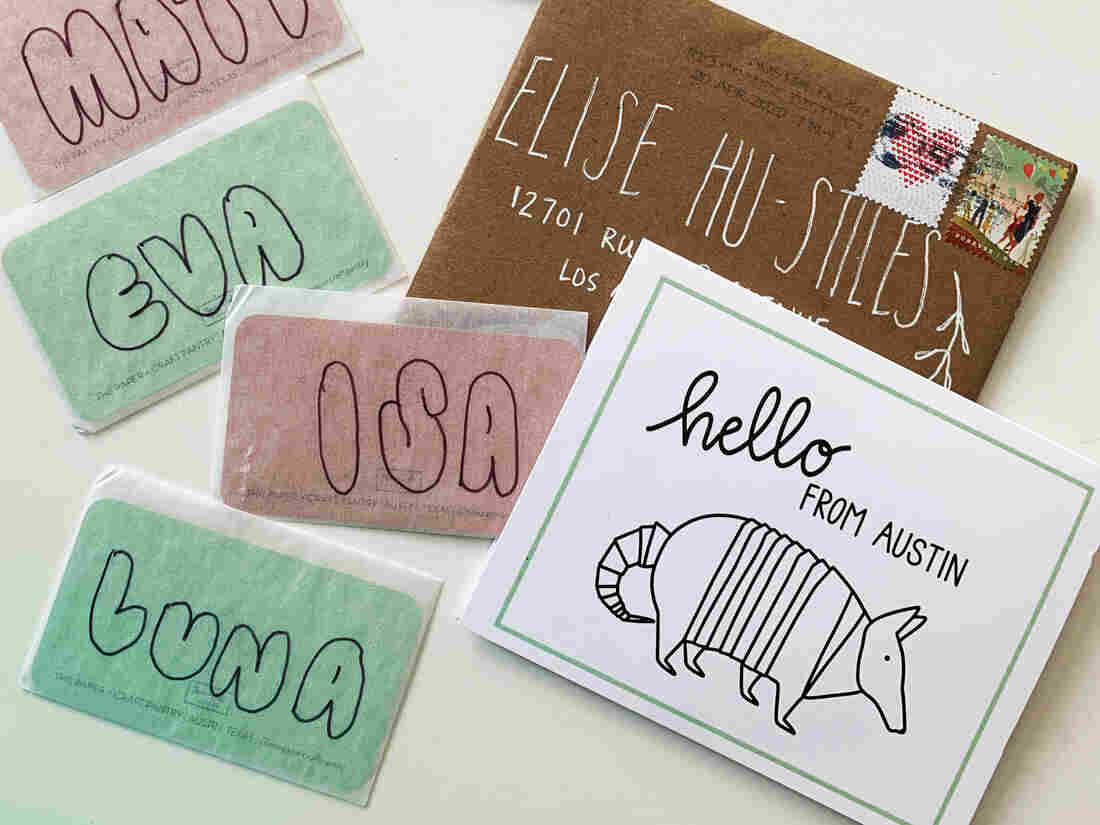 Lizzie Chen in Austin sent her response on the most adorable stationery and included cards for other members of my family. Elise Hu/NPR hide caption 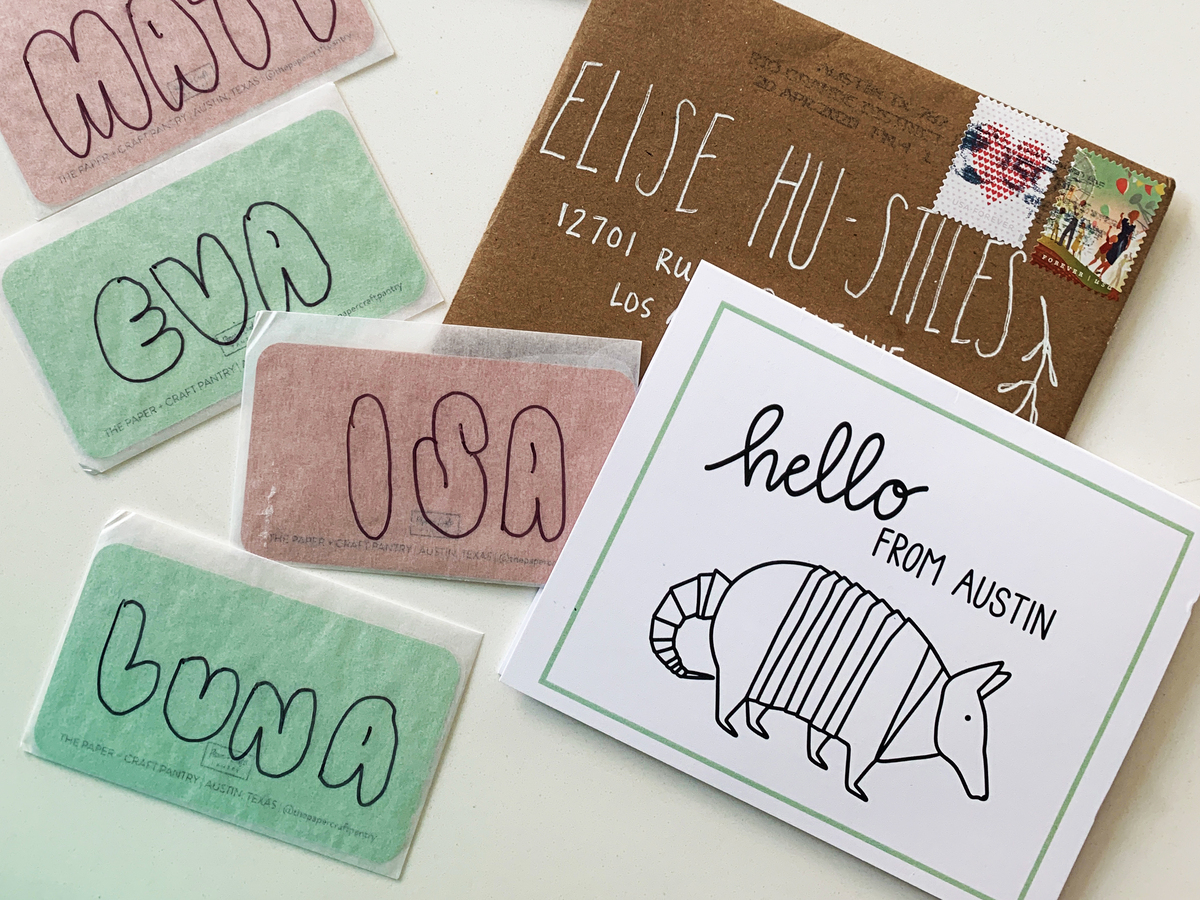 Lizzie Chen in Austin sent her response on the most adorable stationery and included cards for other members of my family.

So many of the feelings my pen pals shared with me mirrored my own. I wrote to them originally to process my fears and anxieties during this time. In the end, the respondents helped me remember the clarifying thing about this pandemic — that we're all part of one community of humans. For the duration of this crucible, and beyond, we should celebrate that which makes us most human: perspective, surprise and connection. Letters to strangers — and from strangers — can satisfy all three.