Accessibility links
Stockholm Won't Reach Herd Immunity In May, Sweden's Chief Epidemiologist Says Sweden's controversial strategy has become a rallying cry of anti-lockdown protesters in the U.S. But not even the official behind the country's coronavirus approach is sure it was the right call. 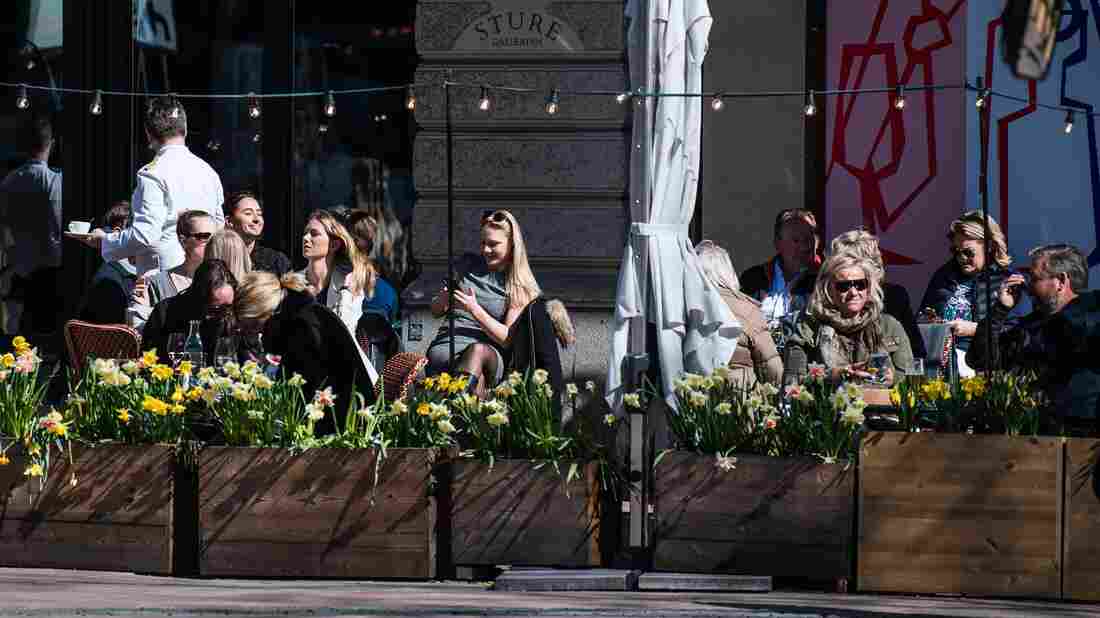 People enjoy the spring weather in mid-April at a restaurant in Stockholm during the coronavirus pandemic. Jonathan Nackstrand/AFP via Getty Images hide caption 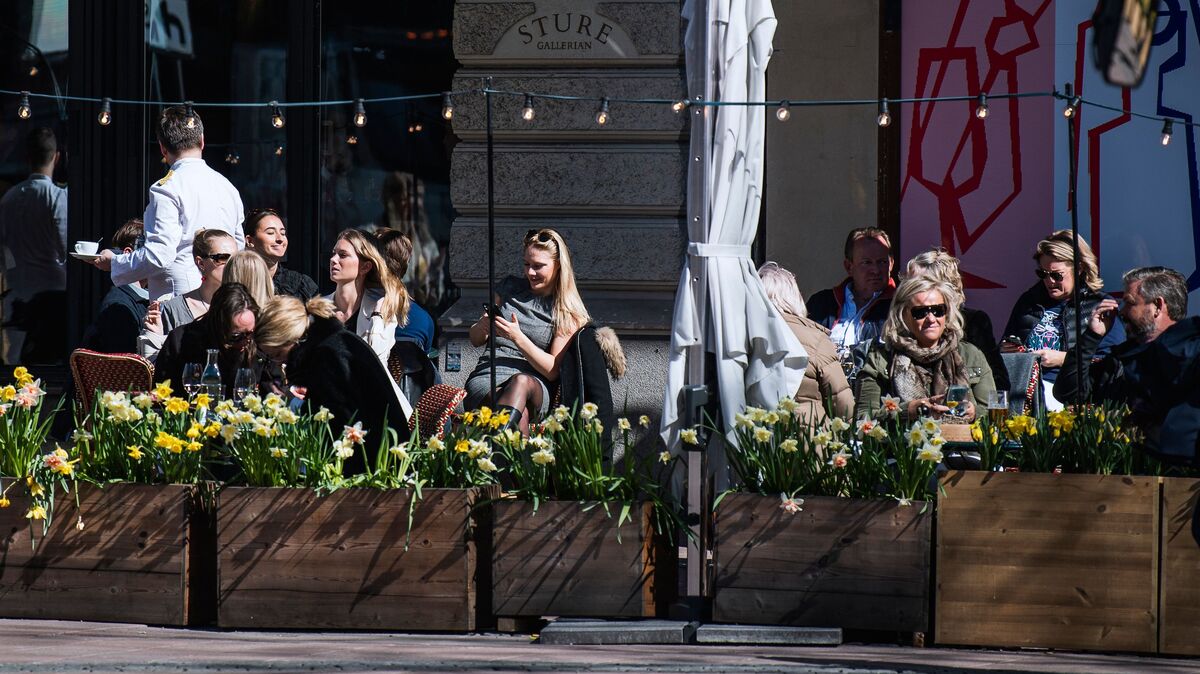 People enjoy the spring weather in mid-April at a restaurant in Stockholm during the coronavirus pandemic.

Sweden's controversial approach to fighting the coronavirus pandemic has so far failed to produce the expected results, and there are calls within the country for the government to change its strategy.

"We have a very vivid political debate," Karin Olofsdotter, Sweden's ambassador to the United States, told NPR. "I don't think people are protesting on the streets but ... there's a very big debate, if this [strategy] is the right thing to do or not, on Facebook and everywhere."

Unlike its Nordic neighbors, Sweden decided against instituting a strict lockdown. The government has enforced social distancing rules but decided to keep most bars, restaurants, schools and retail shops open. The country's approach relies on public cooperation to slow the spread and not overwhelm the hospital system.

Health officials also hoped that keeping the country open would mean its younger, not-at-risk population would develop immunity against the virus, potentially leading to herd immunity. Anders Tegnell, chief epidemiologist at Sweden's Public Health Agency, said in an interview with CNBC in late April that sampling and modeling data indicated that about 20% of Stockholm's population is already immune to the virus.

Olofsdotter told NPR last month that the country's capital could reach herd immunity by the end of this month. Herd immunity occurs when enough people of a population are immune to an infectious disease, either because they've been infected and recovered or they've been vaccinated against it. Some researchers have put the threshold for coronavirus herd immunity at 60%.

Unfortunately, Stockholm will not reach this milestone in May.

"No that will not happen," Tegnell said Monday in an email to NPR. "Current investigations show different numbers, but [Stockholm's immunity rate] is likely lower [than 30%]. As you might be aware, there is a problem with measuring immunity for this virus."

Sweden's Public Health Agency last week released the initial findings of an ongoing antibodies study that showed that 7.3% of people in Stockholm had developed antibodies against COVID-19 by late April. Tegnell later described the study's figure as a "bit lower than we'd thought," adding that the findings represented a snapshot of the situation some weeks ago and he believed that by now "a little more than 20%" of Stockholm's population should have contracted the virus.

It's the same figure he mentioned in the CNBC interview more than a month ago.

A protest Sunday against the government's anti-lockdown strategy at Stockholm's Sergels Torg attracted a few dozen people. One of the protest signs read, "In memory of everyone who Sweden couldn't save with its strategy."

The Swedish Embassy in Washington, D.C., said in a statement to NPR that the country's government as well as its public health agency believe it's still "far too early to draw any clear conclusions or comparisons connected to the coronavirus pandemic," but "we are open with that the strategy has failed to protect the elderly living in care homes."

Nearly half of the country's more than 4,000 COVID-19 deaths have occurred in such care facilities.

A majority of Swedes, 63%, according to one recent poll, support the measures Tegnell's agency has recommended.

For some anti-lockdown protesters in the U.S., "Be like Sweden" has become a rallying cry at protests. But given the political, social and cultural differences between the two countries, simply adopting the Swedish model might not work.

"Every country and region is different, and every country and region needs do what they think is best for their place," said Olofsdotter, the Swedish ambassador. "In Sweden, there's a fairly big trust between the population and the government and its agencies and vice versa. Of course, if we can be an inspiration to others, and they find measures that we have used useful in either a state or region, that's good, because we are all in this together."

Even without a nationwide lockdown, Sweden's economy has taken a hit as people continue to follow the government's guidelines and stay at home. Google records indicated that trips to retail and recreational destinations in Stockholm are down 23%, while passenger numbers on public transit declined 29% between March 28 and May 9.

"Despite the comprehensive measures both in Sweden and abroad, the economic consequences of the pandemic will be considerable," the Riksbank said in a statement in April. "The consequences for the economy will vary depending on how long the spread of infection continues and on how long the restrictions implemented to slow it down are in place."

Both scenarios predict a rise in the unemployment rate and a contraction of the country's gross domestic product. The central bank expects unemployment to rise from 6.8% to 10.1% and GDP to shrink by up to 9.7% this year as result of the pandemic.

Earlier this month, Tegnell admitted he is not sure Sweden's strategy was the right call. "I'm not convinced at all — we are constantly thinking about this," he told Swedish newspaper Aftonbladet.