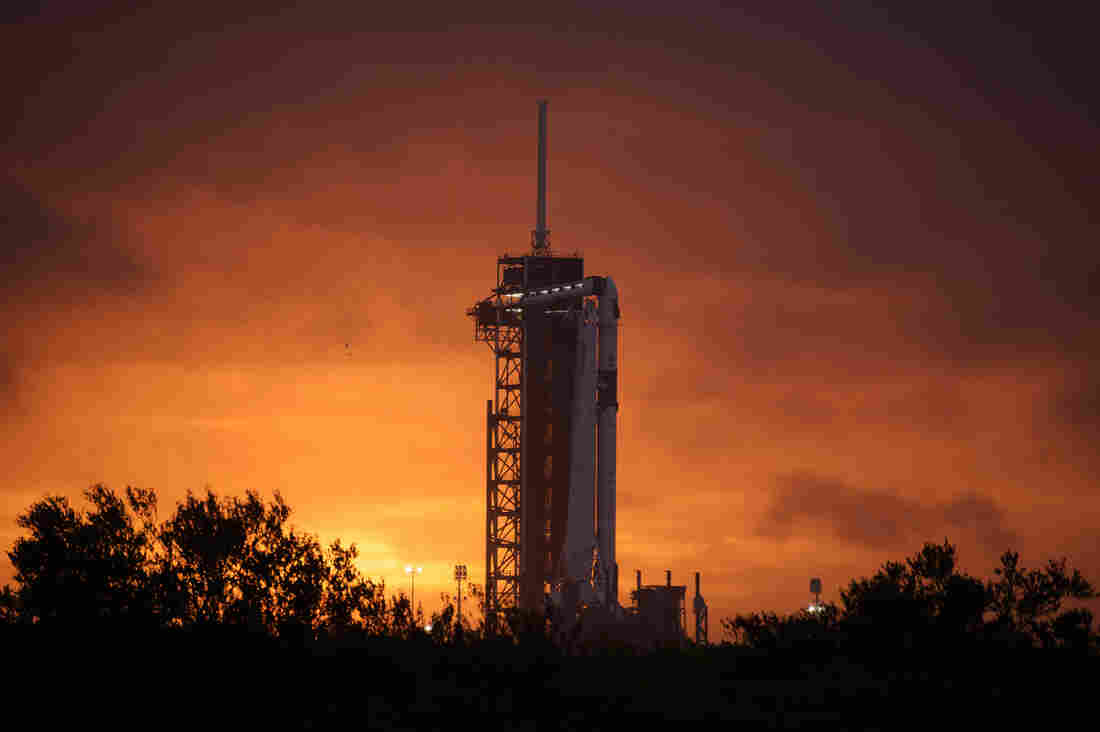 Ahead of tomorrow's flight the SpaceX Falcon 9 rocket with Crew Dragon spacecraft sits on the launch pad at Launch Complex 39A at NASA's Kennedy Space Center in Florida. Bill Ingalls/NASA hide caption 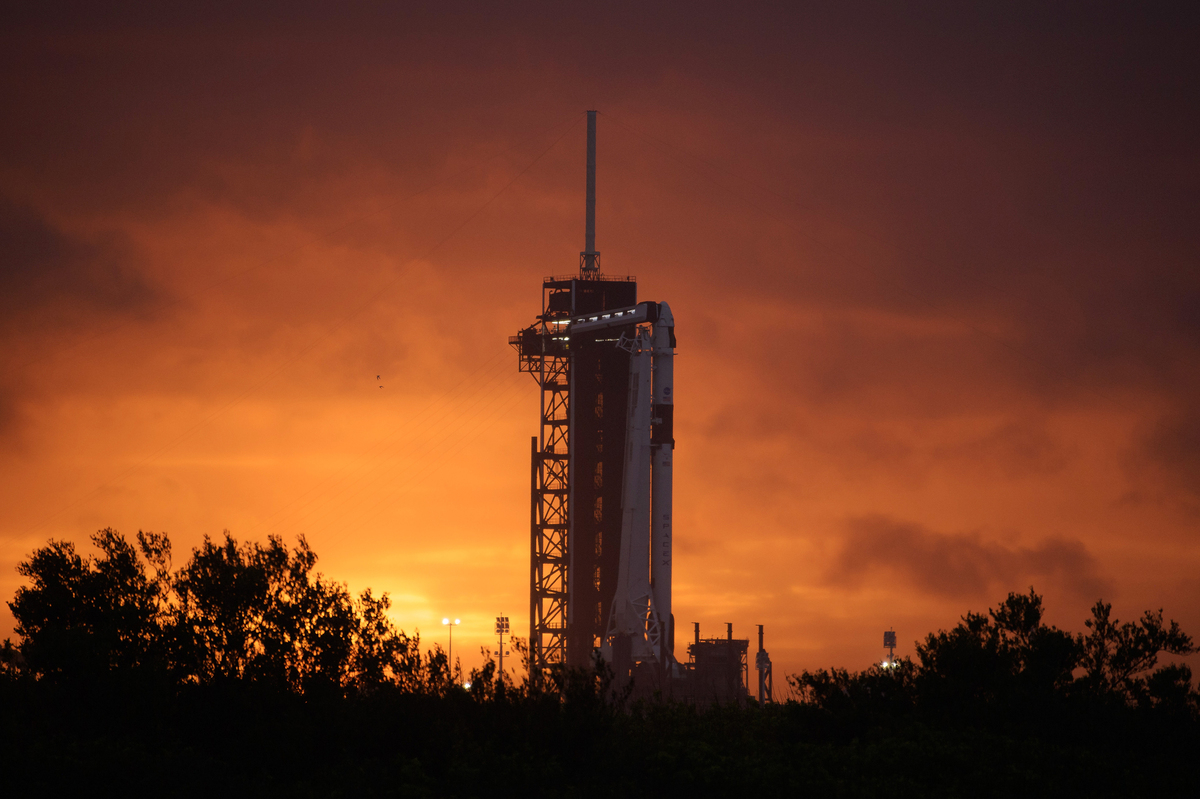 Ahead of tomorrow's flight the SpaceX Falcon 9 rocket with Crew Dragon spacecraft sits on the launch pad at Launch Complex 39A at NASA's Kennedy Space Center in Florida.

Almost 40 years have passed since the last time NASA astronauts blasted off into space on a brand new spaceship.

Now, as NASA looks forward to Wednesday's planned test flight of the SpaceX Crew Dragon with a pair of astronauts on board, some in the spaceflight community have a little bit of déjà vu.

The first space shuttle, Columbia, flew on April 12, 1981. Crowds gathered in Florida to watch this strange new spacecraft. It looked more like an airplane than the familiar bell-shaped capsules of the Apollo moon missions.

Wayne Hale's wife woke him up for the shuttle launch and he watched it on television in his bedroom, where he'd been trying to get a little sleep after working a prelaunch shift at Houston's Mission Control. He'd just come to NASA a few years before, and he says that a lot about that time was not so different from now.

"The substantially similar thing is that we've been waiting too long without being able to send Americans into orbit from America," says Hale, who went on to be a flight director for dozens of shuttle missions and head of the shuttle program.

Almost six years went by between the last flight of an Apollo spacecraft and the first space shuttle launch. "I remember a lot of talk about, 'Well, we should never be in the position as a nation again of not being able to send astronauts into space for this long,' " Hale says.

This time around, though, NASA has been waiting even longer — almost nine years.

NASA retired its space shuttles in 2011. Since then, it has been paying for seats on the Russian Soyuz spacecraft to get its astronauts to the International Space Station. That means American astronauts have been launching from Kazakhstan.

Meanwhile, the space agency has been partnering with companies such as SpaceX and Boeing to help them build their own space vehicles. The idea was that NASA would focus on more ambitious missions like a return to the lunar surface, while letting space companies basically operate a taxi service to the nearby station.

One of them — the SpaceX Crew Dragon — is finally ready to blast off with people on board. And some in the space industry think this historic launch marks the start of a revolution for space travel.

That's because folks outside of NASA will be able to fly on these space taxis, too, if they can afford the fare, opening up space as a more accessible travel destination. Already there's talk of Tom Cruise riding a SpaceX capsule to the station to shoot an action movie. 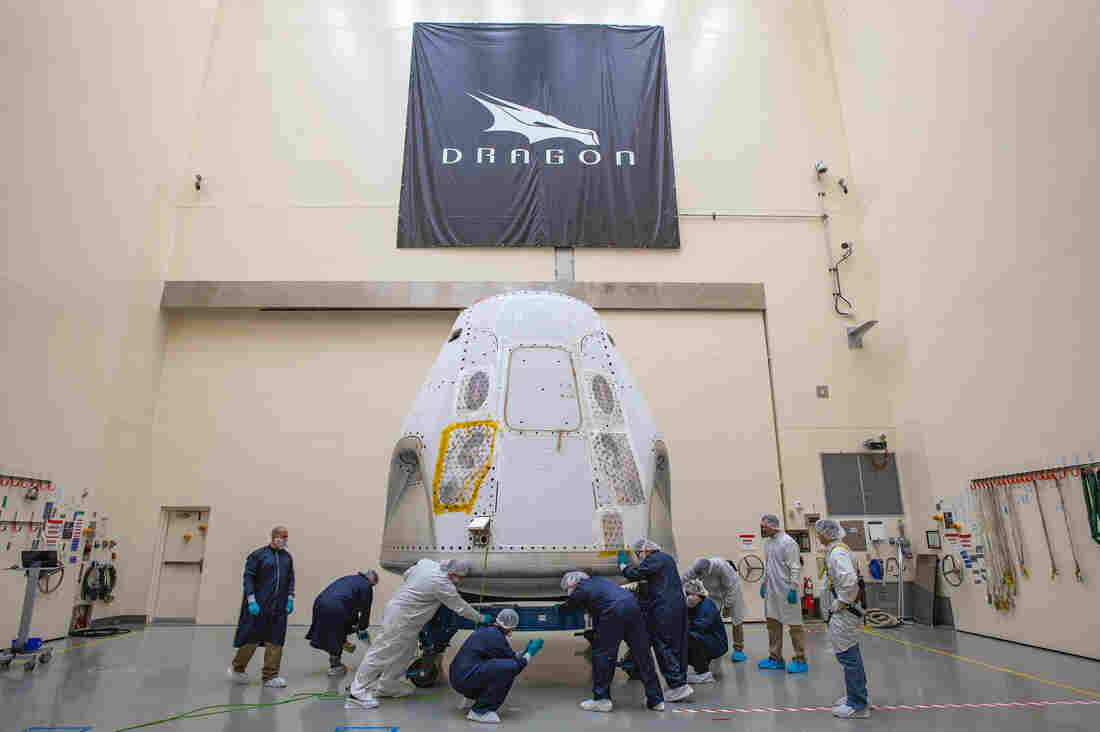 The SpaceX Crew Dragon spacecraft is prepared for its first crewed launch from American soil. It arrived at the launch site on Feb. 13. SpaceX hide caption 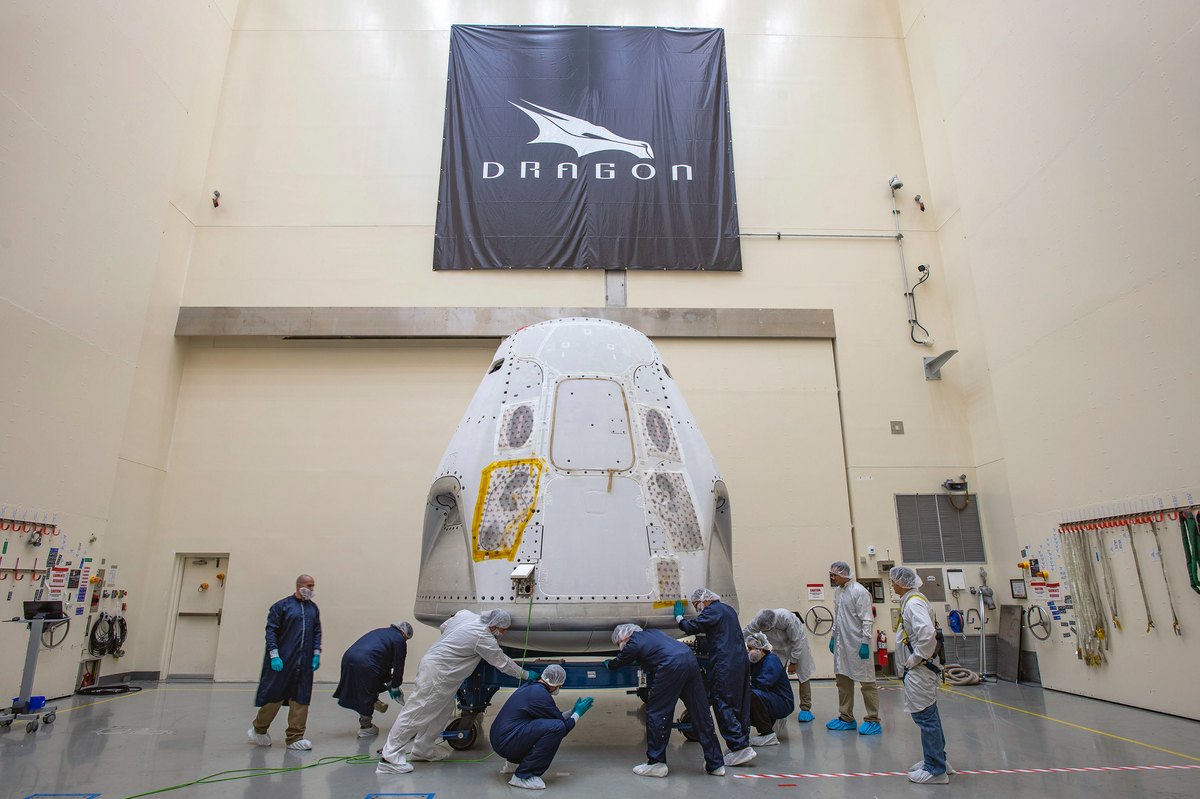 The SpaceX Crew Dragon spacecraft is prepared for its first crewed launch from American soil. It arrived at the launch site on Feb. 13.

Here again, history is repeating itself. Hale says the reusable space shuttle was supposed to transform space travel in a similar way.

All of that ended with the Challenger disaster and the deaths of all on board, including teacher Christa McAuliffe. The shuttle was more dangerous and more expensive than originally planned, and it flew far less often than NASA had hoped. The agency had to shelve its vision of bringing up lots of ordinary people.

"Let's hope that this new generation of spacecraft really work out to be safe enough where we really can do that," says Hale.

The safety of SpaceX's capsule and rocket is better understood than the shuttle was at its start. SpaceX had a successful test flight to the station and back with no people on board — except after it had docked to the station, when astronauts on board the outpost opened the hatch and went inside.

The company also checked out the safety system for astronauts by deliberately destroying one of its rockets and checking to ensure that the capsule escaped without harm. 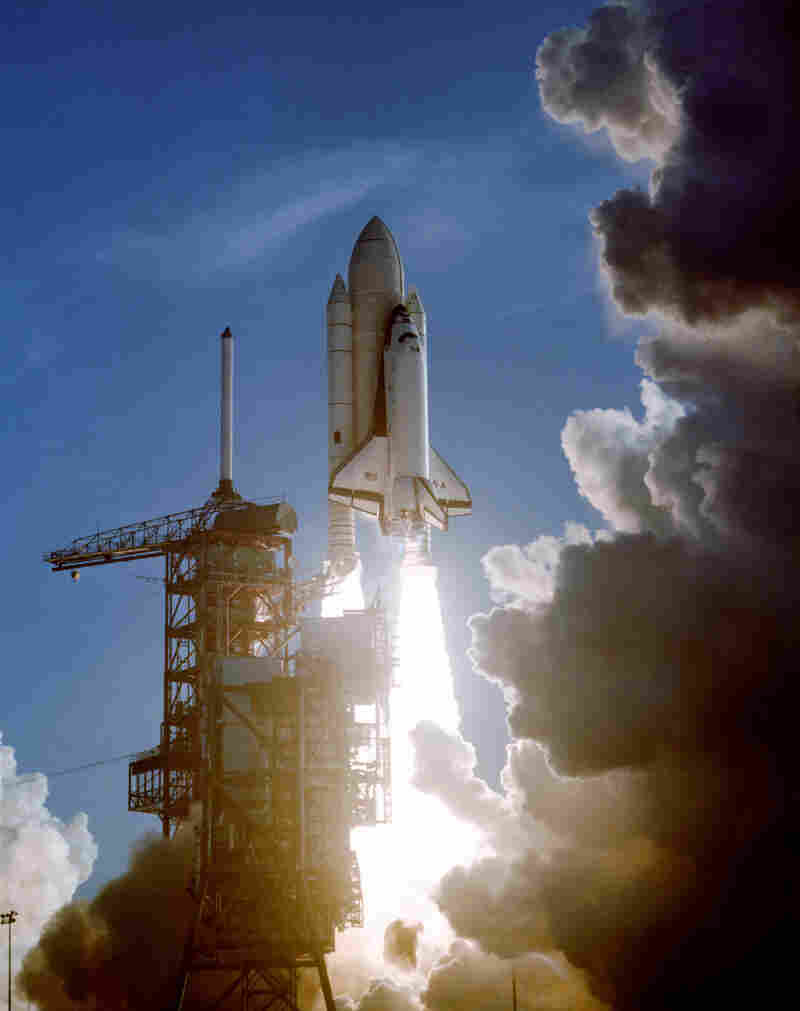 The first orbital mission of the space shuttle lifts off from the Kennedy Space Center on April 12, 1981. NASA hide caption

Nothing like that was true for the space shuttle. NASA had never launched anything like it before sending it up with two astronauts: veteran John Young and rookie Robert Crippen.

On Wednesday afternoon at 4:33 p.m. EDT, from the very same launch pad, the SpaceX vehicle is scheduled to carry up another pair of astronauts: Douglas Hurley and Robert Behnken.

"It's probably a dream of every test pilot school student to have the opportunity to fly on a brand-new spaceship and I'm lucky enough to get that opportunity," says Behnken.

Hurley says that during their time in the astronaut corps, they both had an opportunity to interact with the first space shuttle flyers. He recently saw Crippen at an event in Texas a few years ago, and they talked about that first shuttle launch.

"I think one thing that really registered with me with what Bob Crippen said was, you know, 'We were so focused on flying the mission, flying the vehicle, and executing and not making a mistake,' " says Hurley.

That's the kind of intense focus Hurley has to have, even in the midst of a pandemic that has NASA begging people not to gather in crowds to watch as they've done in the past for the shuttle. 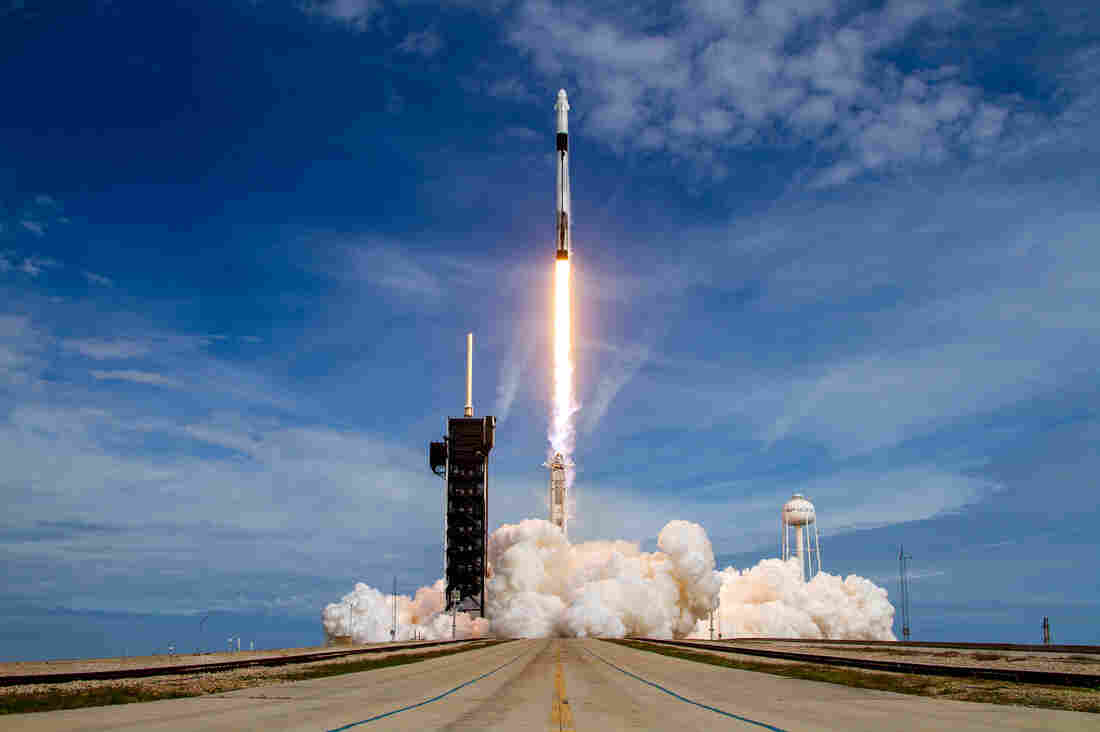 Both Behnken and Hurley have flown on the space shuttle — in fact, Hurley was on its last mission. The shuttle had a cockpit crammed full of switches and dials, but the more modern SpaceX capsule is controlled with a sleek touchscreen.

"Growing up as a pilot, my whole career, having a certain way to control a vehicle," says Hurley. "This is certainly different."

And when the duo returns to Earth, they'll splash down in the ocean rather than coasting to a stop on a landing strip.

They will, however, be carrying some familiar cargo: an American flag. It flew on the first shuttle mission and the last. It has been hanging at the space station for years, just waiting for a crew to launch from the U.S. and bring it back home.