Accessibility links
New Relief Program For Undocumented In California Overwhelmed By Demand Response far outstrips resources as the state partners with nonprofits and foundations in a one-time program that aids undocumented workers and their families during the pandemic. 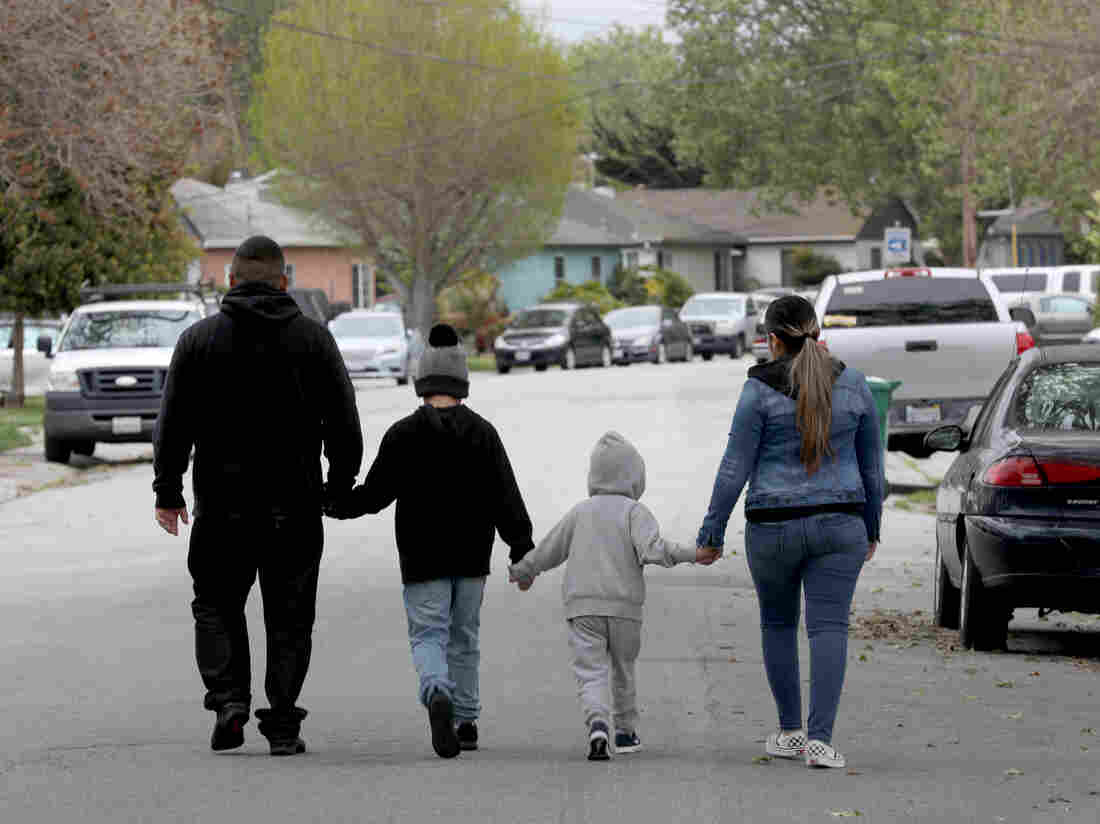 Christian (left) and his wife Monze (right) were laid off from restaurant jobs in mid-March and not qualified to receive unemployment because they are undocumented immigrants. Liz Hafalia/The San Francisco Chronicle via Getty Images hide caption 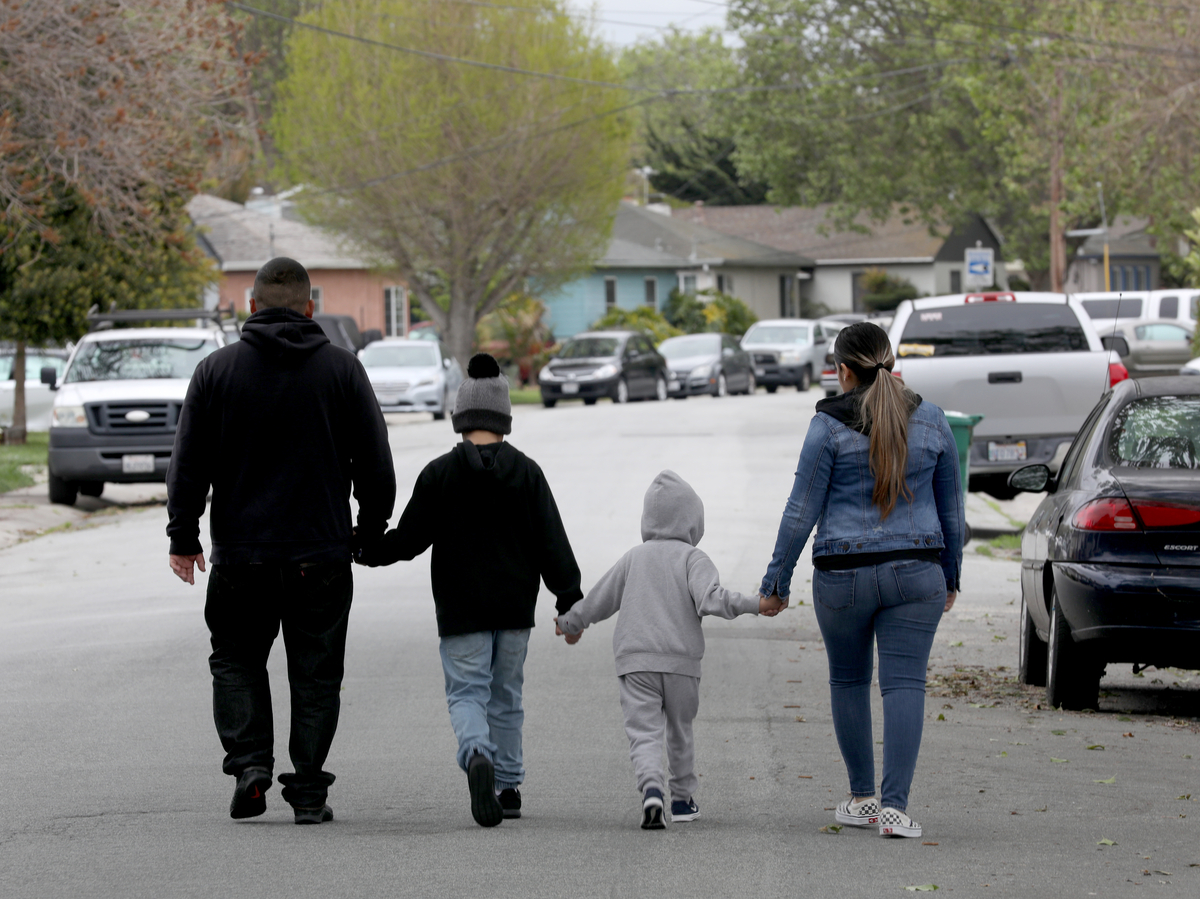 Christian (left) and his wife Monze (right) were laid off from restaurant jobs in mid-March and not qualified to receive unemployment because they are undocumented immigrants.

California's first-of-its-kind effort to get cash aid into the hands of undocumented workers affected by the coronavirus got off to a bumpy start over the past week.

Across the state, tens of thousands of immigrants calling to apply encountered busy signals, crashed phone lines and frustration.

"People are desperate right now," says Christopher Martinez, the chief program officer for Catholic Charities of the East Bay, "that's why they're reaching out. And they're very worried that these funds will run out quickly. But we're just asking people to keep trying."

Catholic Charities is one of a dozen nonprofit and immigrant rights groups the state of California has partnered with to try to reach workers who are living here illegally. Many are doing work that qualifies as an essential work, but their status makes them ineligible for federal pandemic relief as well as most state and local relief.

"They were providing valuable services to our community and, because of the pandemic, essentially they're at zero income right now," says Martinez. "They were day care providers, house cleaners, providing painting or general contract work."

Applicants must meet certain criteria. For those who are approved, the program offers a direct cash payment of $500 per adult, $1,000 max per family.

Because of virus-related health concerns, as well as deportation fears, there are no in-person or online applications for the aid money. It's almost all processed electronically and through phone lines. Callers often have no ability to leave phone messages, so the lines so far have been consistently overloaded.

"I dial and dial and dial and I get a busy signal," says Jaime, an immigrant from El Salvador, who did not want his last name used because of his status. "I feel like the opportunity goes away every day, the funds are running lower every day, and no one picks up my call."

The funds are being doled out on a first-come, first-served basis until the taxpayer-funded $75 million pot of money runs out. A group of foundations and private donors called Grantmakers Concerned with Immigrants and Refugees pledged an additional $50 million in direct financial aid to families of undocumented immigrants.

Jaime says his wife and two children, ages 8 and 5, are scared. He works construction in Southern California installing heating and air-conditioning units. He says he's paid per installation, but since March, work had been sporadic. Two weeks ago, it stopped.

His children are U.S. citizens and they qualify for food stamps and some other aid, but not for federal coronavirus relief funds because they are children of undocumented workers. Jaime says he has never before asked for government assistance.

"I've always provided with my own work," he says, proudly. But he worries about what will happen as the pandemic wears on. "I don't know what I'll do, but I know it will get much harder for me."

The state of California is working with groups already known and trusted in these communities by people whose immigration status can make them fearful of authorities.

A consortium of Bay Area Catholic Charities is responsible for implementing the program in the broader region. It has averaged nearly 200,000 calls a day, so far. On several days, the call volume crashed lines. The group has just 100 people answering phones.

"It really speaks to how enormous the need is," Martinez says. "Even if we had 500 agents ready to answer calls, we simply wouldn't be able to get to everybody."

Overloaded phone lines aren't the only obstacle. Some applicants don't have access to computers. Others weren't comfortable downloading apps on their phones.

"Part of the challenge of this process in distributing disaster relief funding is the fact that we do have to walk folks through a process to be able to utilize their phones to get us documents or data" and to use their mobile phones for e-signatures, says Diana Tellefson-Torres who is the executive director of the United Farm Workers Foundation, a grassroots organization that's processing and evaluating aid applications in the Central Valley. "That is adding more time to serve folks over the phone."

She and her staff often advise applicants with limited tech experience to enlist the help of their teenage children or someone else in the household who is more tech-savvy.

Despite the challenges, immigrants are getting help. For example, in the first week, Bay Area groups have processed more than 2,500 cash cards worth more than $1.2 million, says spokeswoman Mary Kuhn with Catholic Charities.

California Department of Social Services spokesman Jason Montiel declined to answer questions about the program and its rocky rollout. In an emailed statement, Montiel said only that, "The 12 nonprofits are receiving a high number of inquiries and are working as quickly as possible to respond to people applying for assistance on a first come, first served basis. Nonprofits are working to set up additional phone lines for expanded capacity."

The scramble is part of a basic math problem: There's only enough aid money for 250,000 people. But there are an estimated 2 million workers in the state illegally, potentially leaving some 1.75 million people in need without aid.

"We have been hearing the needs and the trauma and the stress from our undocumented community since the pandemic rolled out, asking what would happen to them if they would get sick," says Luz Gallegos, the community program director at TODEC Legal Center based in Perris, Calif., one of the nonprofits processing applications.

Gallegos concedes that $500 may not cover all expenses, but applicants tell her they'll use the money to buy food or medications, pay a phone bill or use it for transportation.

"It's been very emotional just to hear folks who have gone through the process and just be so thankful," Gallegos says.

California Gov. Gavin Newsom announced the program in April, saying he felt a deep sense of gratitude to undocumented immigrants who "are still in fear of deportation, but are still addressing the essential needs of tens of millions of Californians."

The overwhelming demand this week has prompted some charities to call for a second round of state funding. That's unlikely given the state's enormous budget woes in the pandemic's wake.

The program has also accelerated efforts by nonprofits to boost their own fundraising for immigrants in need.

A conservative group had sued the state to try to stop taxpayer funds going to undocumented immigrants. The state Supreme Court dismissed the lawsuit.