Accessibility links
Unlikely Allies Band Together In Laredo To Oppose The Border Wall Landowners, bankers, city officials and a congressman are all trying to keep the wall from coming and destroying the 265-year-old city's historic downtown. 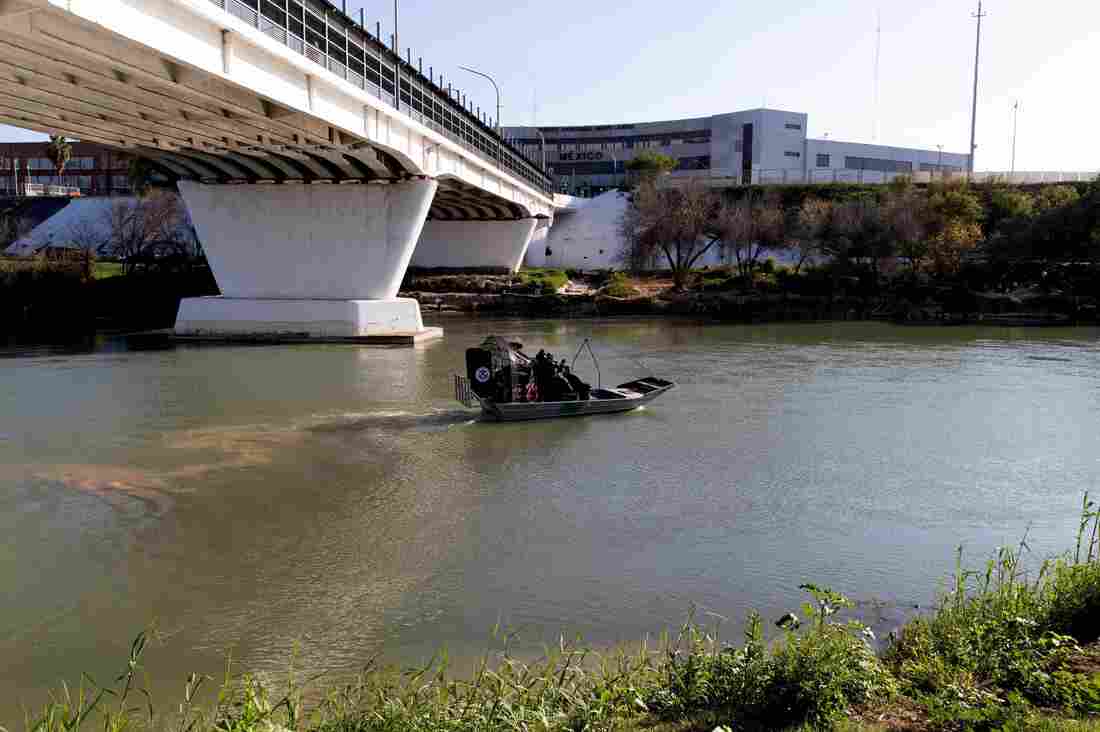 An airboat from the South Border Patrol Station in Laredo, Texas, leaves to patrol the Rio Grande River near the Laredo checkpoint. Suzanne Cordeiro / AFP via Getty Images hide caption 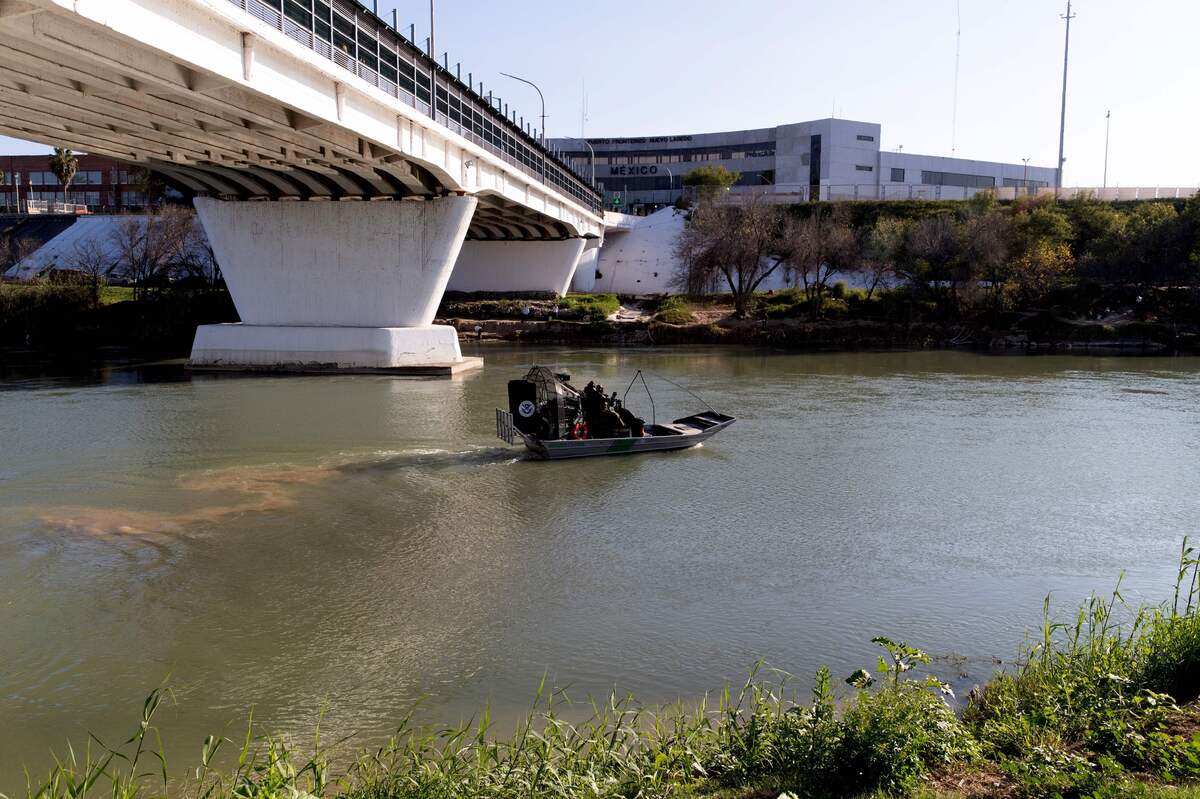 An airboat from the South Border Patrol Station in Laredo, Texas, leaves to patrol the Rio Grande River near the Laredo checkpoint.

The federal government is planning to put 69 miles of its massive border wall along the river in Texas' Webb and Zapata counties. When it became clear that the imposing barrier would plow through the center of the proud city of Laredo, a remarkably diverse coalition of wall-haters assembled to fight it.

Folks in black "No Border Wall" T-shirts marched in the streets earlier this year. They share their movement with sedate bankers in starched, white shirts and gray suits who are just as passionate.

"Here we have a beautiful river, a historic river that is an amenity for our city," said Dennis Nixon, chairman of the International Bank of Commerce, headquartered in Laredo. "It's disheartening. Would you want a wall on the Potomac or a wall on the East River in New York City?"

Other members of the growing anti-wall coalition are outraged property owners.

Tony Medina is a 72-year-old retired land surveyor with a small tract upriver from Laredo that the feds want. He goes out there to enjoy nature, amid the ticks and rattlesnakes, and he lets fishermen launch their flatboats to haul in the big Rio Grande catfish. With only three acres, he thinks his property would be effectively covered up by the wall and its 150-foot-wide enforcement zone — as wide as a four-lane highway.

"I don't think we have a national emergency here on the Mexican border. People aren't flooding across the border, I haven't seen it in my lifetime," Medina said, his voice rising with anger. "I think Donald Trump is just trying to appease and energize his racist base with this promise of a border wall." 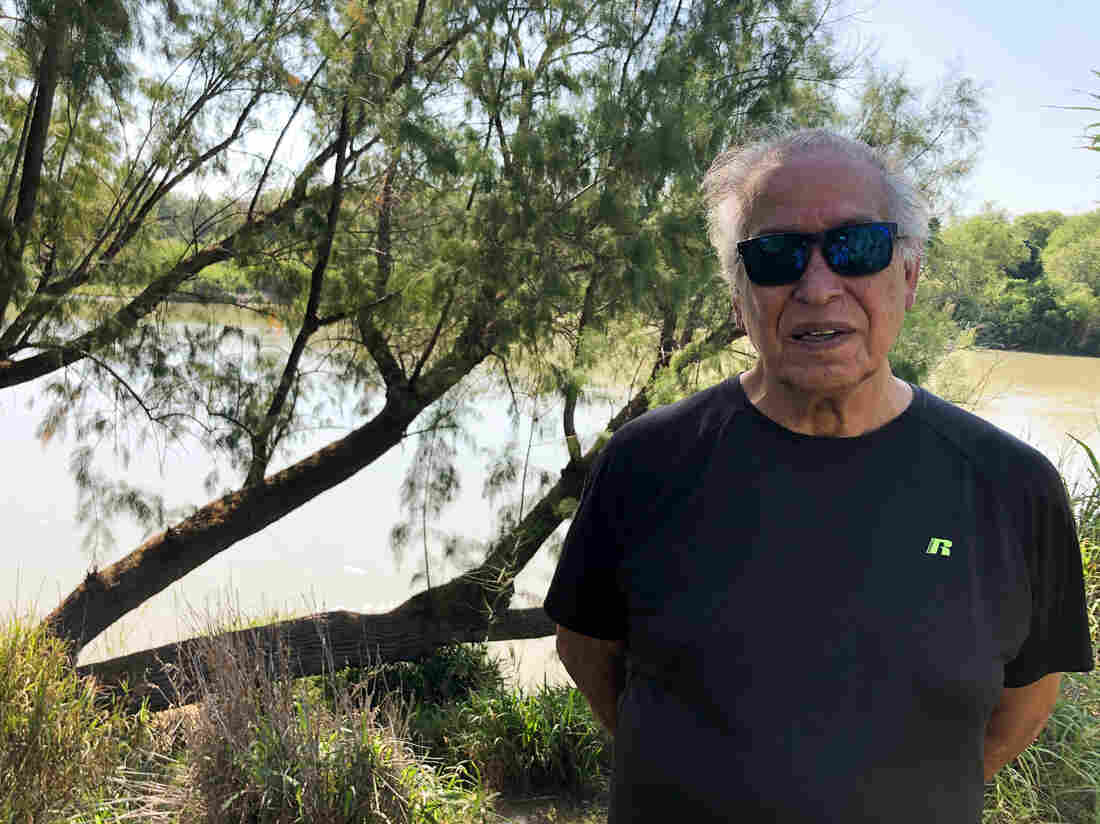 Landowner Tony Medina says a 30-foot-tall wall and its 150-foot enforcement zone would wipe out his property, which is popular with catfish anglers. John Burnett/NPR hide caption 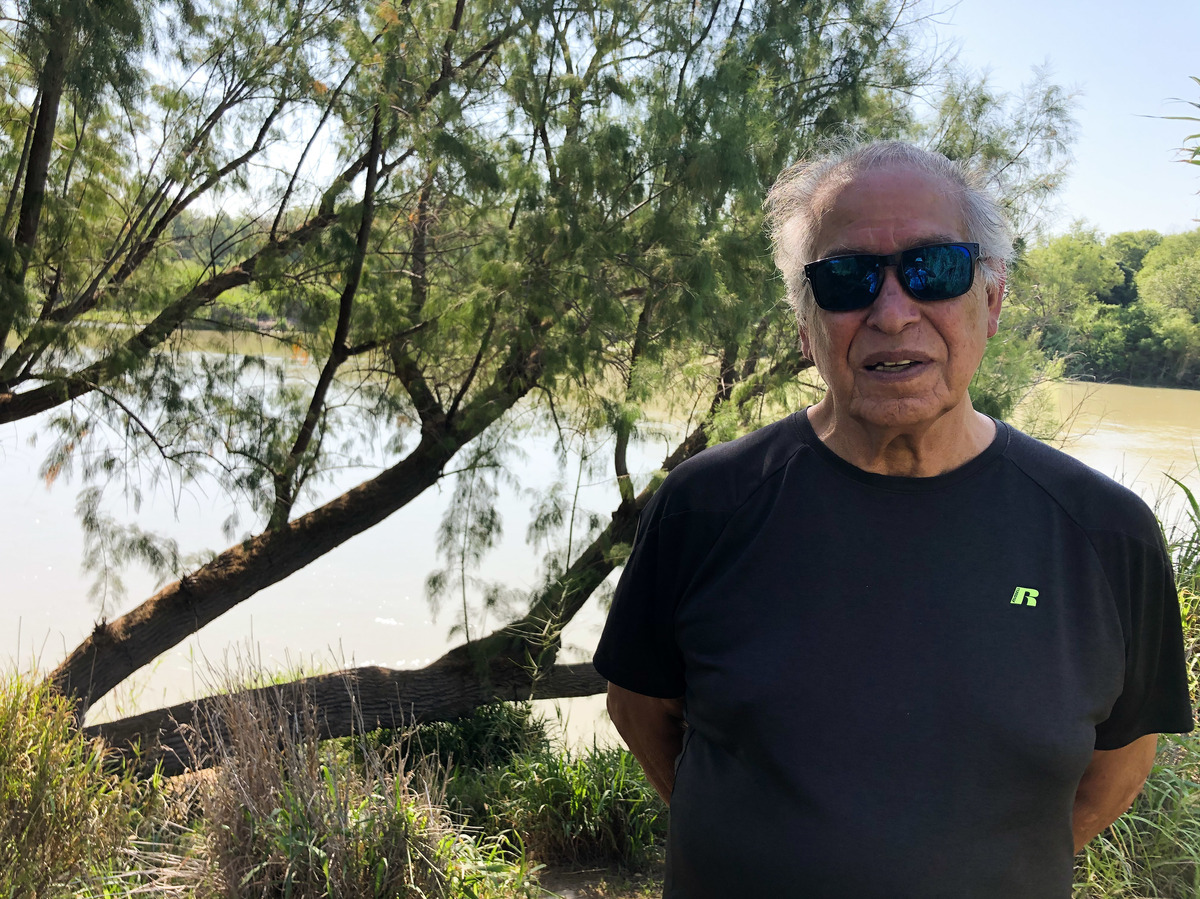 Landowner Tony Medina says a 30-foot-tall wall and its 150-foot enforcement zone would wipe out his property, which is popular with catfish anglers.

Downriver, outside the historic town of San Ygnacio, Elsa Hull, a state water quality monitor, lives on a remote plot with her two daughters. The government wants her three acres, too, for the wall, which will have stadium lights installed every 150 feet.

"One of the things we like to do out here, I have a telescope and we like to observe the night sky, meteor showers," she said. "And the bright lights will wash out our night sky, no more Milky Way. There's so many reasons that this wall is just a horrible idea."

Medina and Hull are among some 250 private landowners along the river in Webb and Zapata counties whose land the government is condemning through its powers of eminent domain. They will ultimately be offered a monetary sum, which they can appeal. Customs and Border Protection says more than half of the property owners who've been contacted have voluntarily signed Rights of Entry papers to allow surveyors onto their land, and a quarter of them have refused. 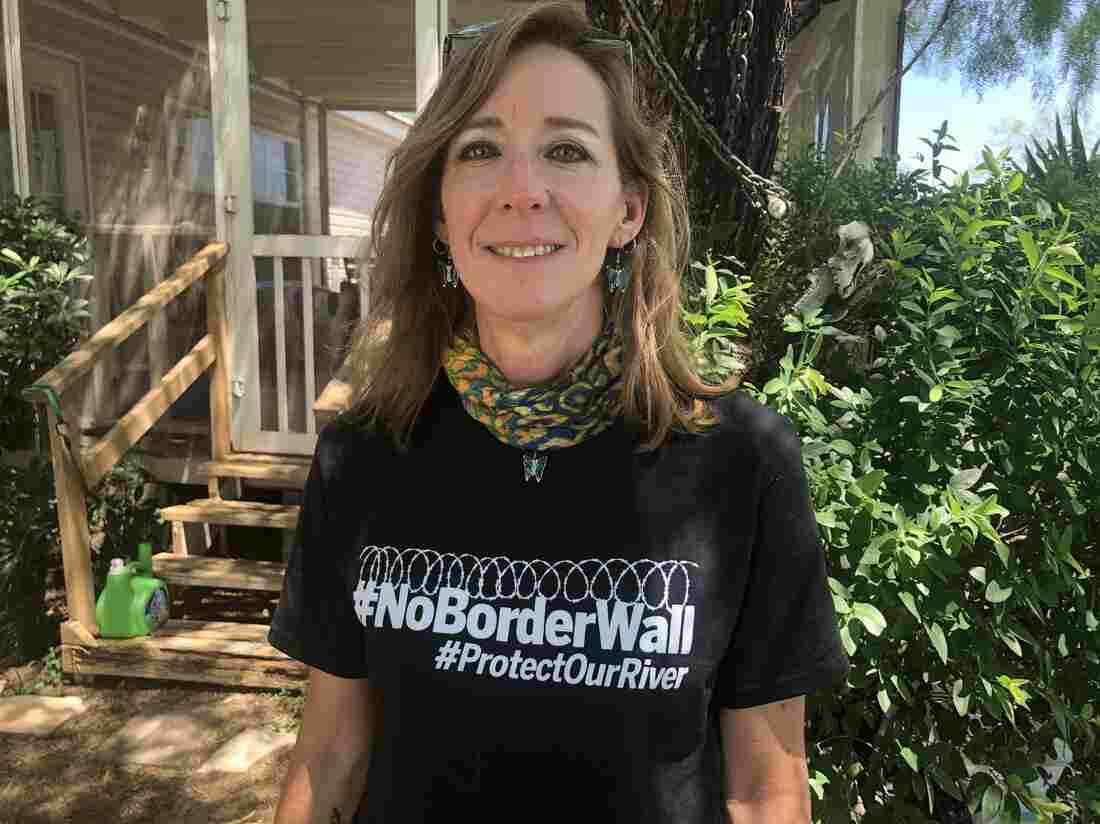 Elsa Hull lives on three remote acres downriver from Laredo and she fears a wall and its bright security lights will ruin her dark skies. John Burnett/NPR hide caption 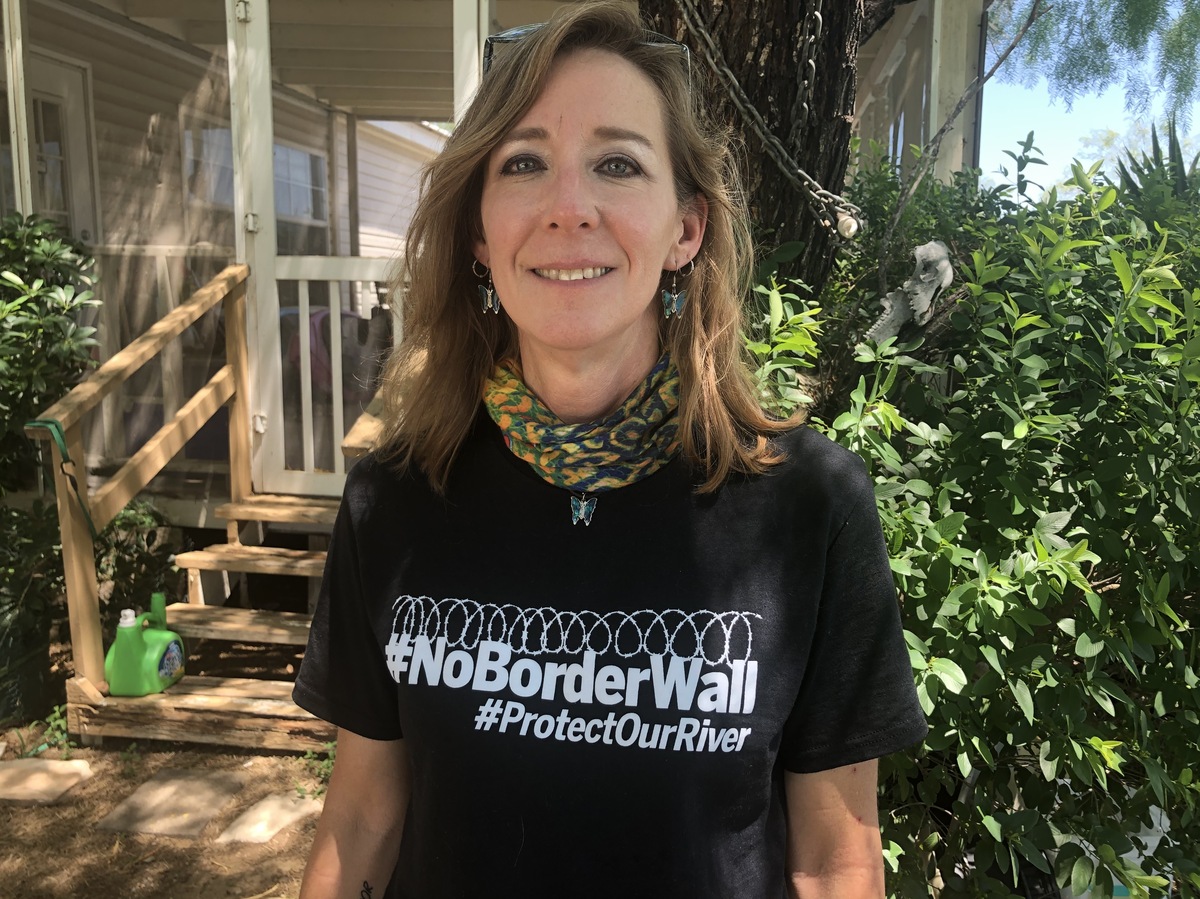 Elsa Hull lives on three remote acres downriver from Laredo and she fears a wall and its bright security lights will ruin her dark skies.

The largest landowner to refuse the government is the City of Laredo.

The Justice Department has sued the city to get access to 983 acres of city-owned riverfront. In its response, the city maintains the wall is illegal because when Congress appropriated the funding it did not specify that the structure would be built in Webb County. That issue is pending before a local federal judge.

Many Laredoans are offended that the steel and concrete barrier would cut across a golf course, a riverside park and an orphanage. And it would symbolically sever Laredo from its sister city, Nuevo Laredo, Mexico, with whom it maintains deep cultural and familial ties.

"It's an insult to us and to our neighbors to the south," said City Councilman Mercurio Martinez III, who traces his lineage back to ranchers who settled on a Spanish land grant.

"Laredo has always been unique. We were once the capital of the Republic of the Rio Grande. We split off when Texas became its own country and they couldn't defend us," he said, noting that this month was Laredo's 265th birthday. 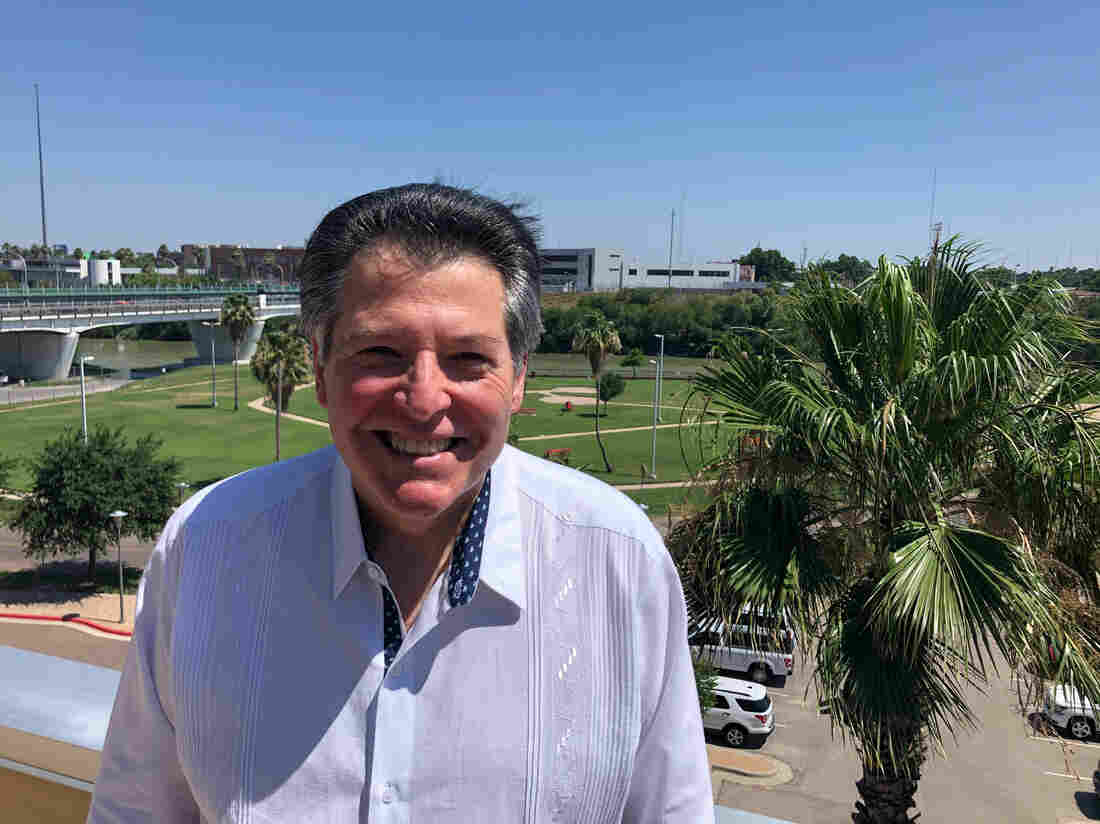 Laredo Mayor Pete Saenz is against a border wall in the riverside park pictured behind him, but if the feds move ahead he hopes they'll build a more eye-pleasing concrete bulkhead. John Burnett/NPR hide caption 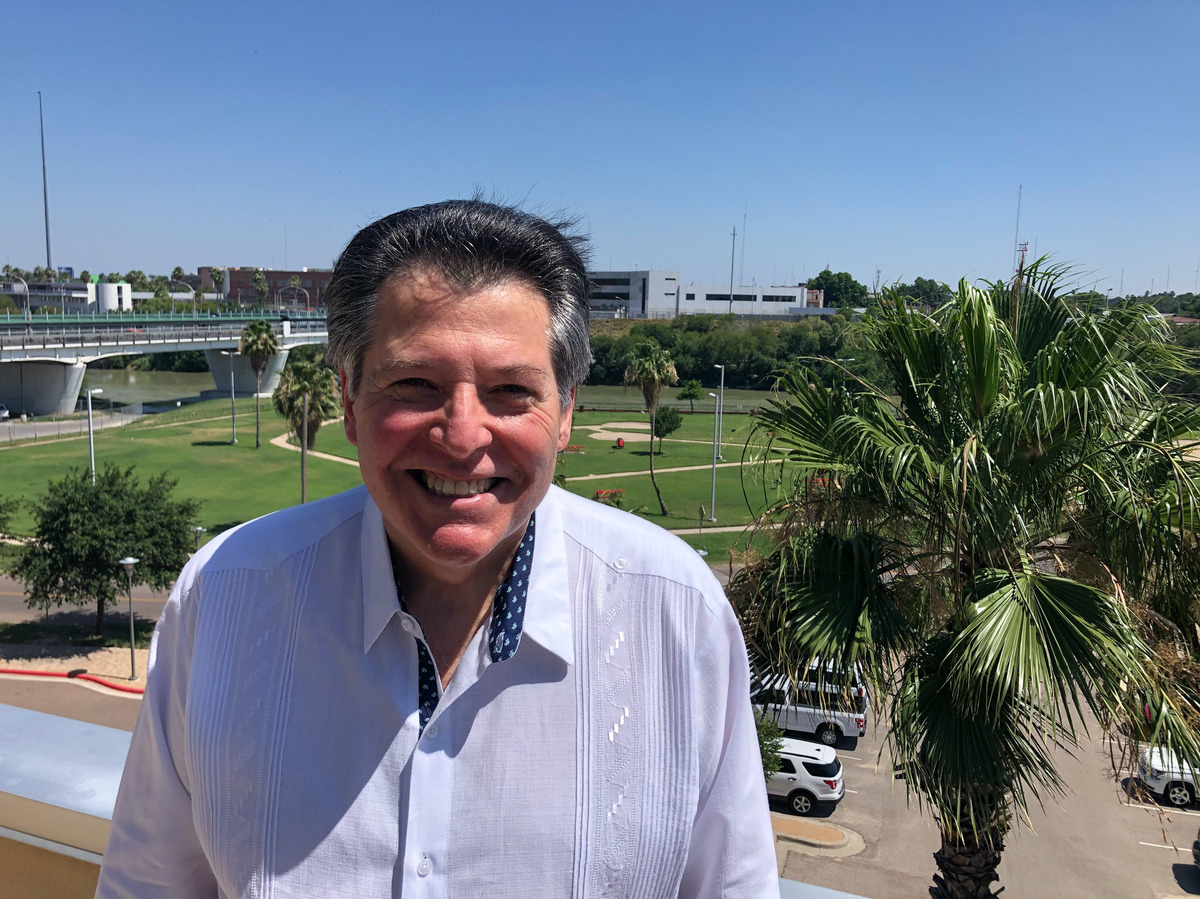 Laredo Mayor Pete Saenz is against a border wall in the riverside park pictured behind him, but if the feds move ahead he hopes they'll build a more eye-pleasing concrete bulkhead.

The city's first choice is to block construction of a 30-foot wall.

"But as a last resort there's always a Plan A and a Plan B," said Laredo Mayor Pete Saenz. Plan B is that if the wall is coming anyway "make lemonade out of lemons," he said.

There are discussions ongoing with CBP to build a concrete riverwalk, or bulkhead, instead of an ugly levee wall topped with steel bollards. The structure would stop illegal crossers, supposedly hold back seasonal floods, and function as a promenade.

"It would be more easy on the eyes. It would be aesthetically pleasing. In this world, you gotta make choices sometimes, especially when you're pinned down and they got you beat," the mayor said with a chuckle. "We're doing the best we can with the situation we confront ourselves with."

The agency confirmed to NPR that it is open to constructing a mile-long bulkhead, but the other 68 miles of steel fencing would continue as planned.

An Alabama construction company has been selected to build the first 14 miles at a cost of $20 million a mile.

"The Laredo Sector is an area of high illegal activity, with over 21,000 illegal alien apprehensions and over 19,000 pounds of drugs seized this fiscal year to date," according to CBP. The agency asserts the wall system "will improve Laredo Sector's ability to impede and deny" illegal border crossings and drug and human smuggling. 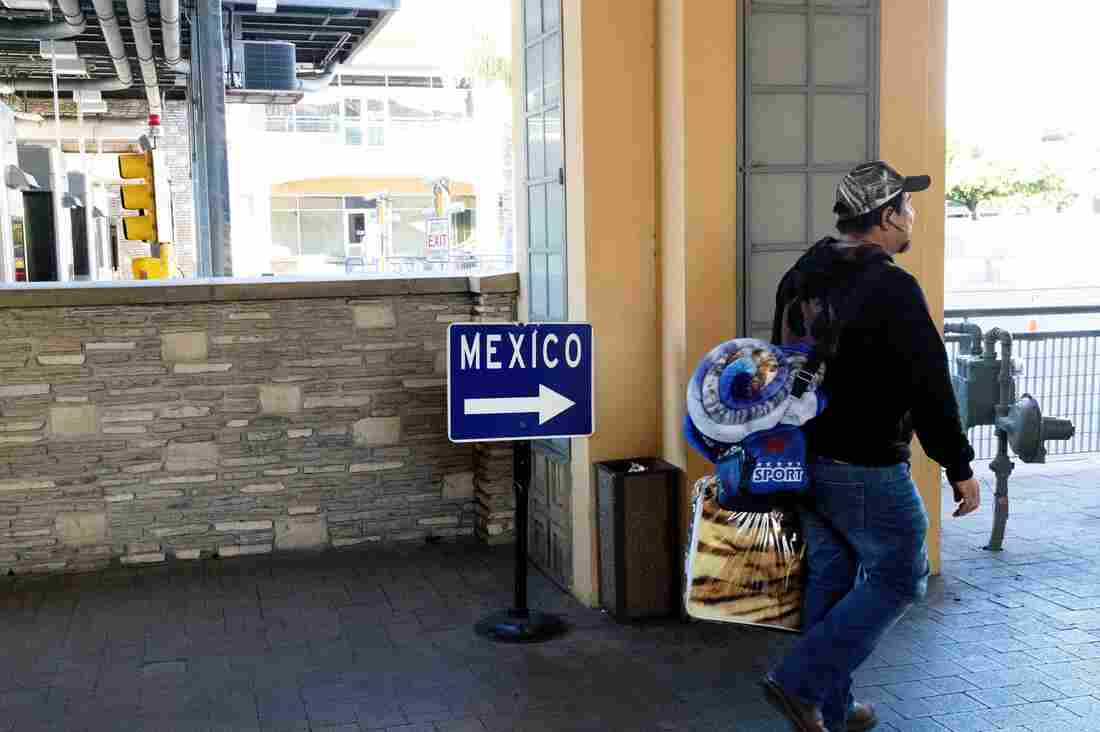 A man prepares to cross the International Bridge towards Mexico on the border in Laredo, Texas, on Jan. 13, 2019. Suzanne Cordeiro / AFP via Getty Images hide caption 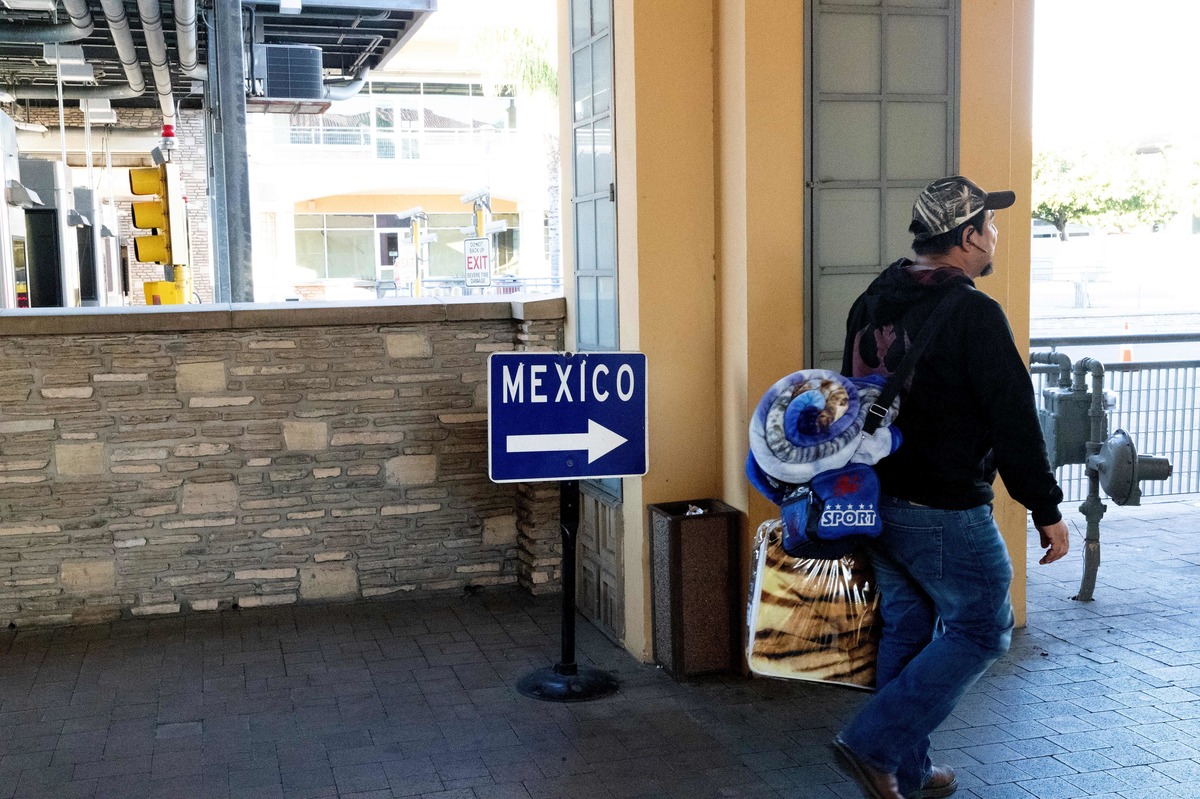 A man prepares to cross the International Bridge towards Mexico on the border in Laredo, Texas, on Jan. 13, 2019.

This is what baffles locals.

CBP's own figures show that apprehensions in the Laredo Sector have been among the lowest on the southwest border, consistently, for more than two decades.

Moreover, the Drug Enforcement Administration says the vast majority of illegal narcotics are smuggled in vehicles crossing international bridges, not by backpackers trekking through the bush.

"We live across from Nuevo Laredo which is one of the most dangerous cities in northern Mexico," said Carlos Flores, a local lawyer who's part of the anti-wall movement. "And Laredo is one of the safest cities in America and we don't have a border wall. So where is the problem?"

CBP says construction won't begin until early 2021. With that in mind, opponents are still working on Plan A — hold off the bulldozers until after the presidential election.

The area's democratic representative, Henry Cuellar, is urging his constituents to stonewall the feds.

"Do not give 'em entry. Delay the process," he said from his Washington DC office. "And hopefully by November we'll have a new person at the White House." The new president and his new CBP commissioner would, presumably, halt wall construction, Cuellar said.

Among the handful of Laredoans who support Trump but oppose his wall, there is a Plan C.

In this scenario, if Trump wins perhaps he could be convinced that he no longer has to pander to his base and he would abandon his "big, beautiful" border wall.

"I want him to change his mind," said Dennis Nixon, the bank chairman. He contributed $7,700 to the president's 2016 campaign and a pro-Trump PAC, and he's hoping for a second Trump term.

"When you spend some time really looking at the issue and maybe take it out of the political arena when he's not running for reelection again, time changes things. People do learn. People do evolve," he said.

The anti-wall coalition is looking for anything to keep Laredo connected to its storied river.