Accessibility links
Pandemic Has Taken 100,000 Lives Across The United States The lethal march of COVID-19 passes 100,000 deaths in the U.S. despite some predictions it would not. The grim milestone presents a moment to consider who has died and how many others might follow. 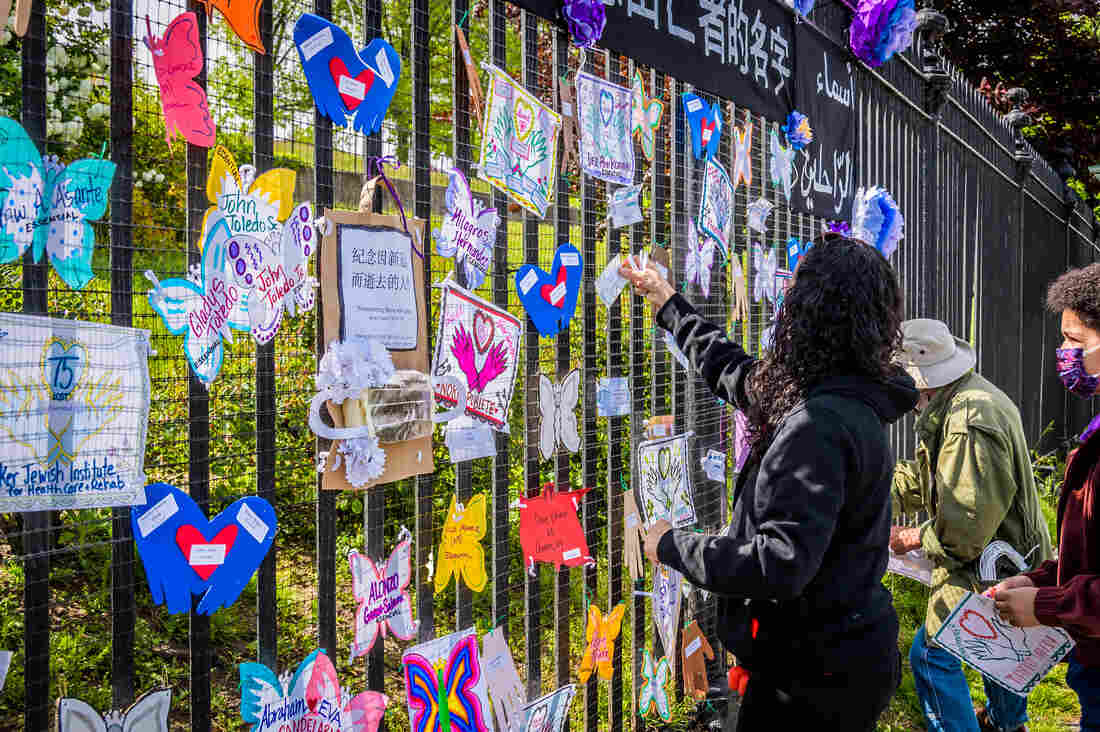 A volunteer artist sets up a memorial May 20 in Brooklyn. Artists and volunteer organizers across New York City put up memorials throughout the five boroughs to honor those who died of COVID-19. Erik McGregor/LightRocket via Getty Images hide caption 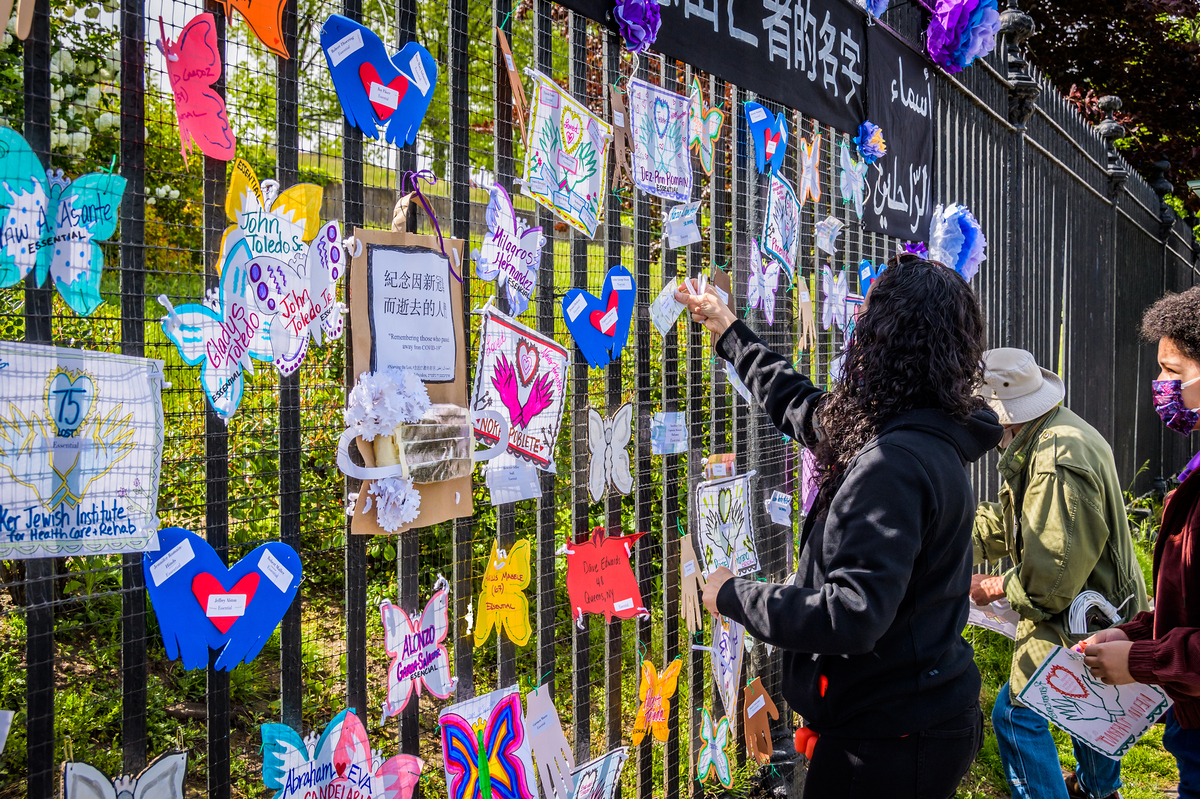 A volunteer artist sets up a memorial May 20 in Brooklyn. Artists and volunteer organizers across New York City put up memorials throughout the five boroughs to honor those who died of COVID-19.

The U.S. death toll from COVID-19 has reached a somber milestone: As of Wednesday afternoon, the highly infectious viral disease has taken more than 100,000 lives nationwide.

Soaring from two known coronavirus fatalities in February to more than 58,000 in April, the tally of U.S. deaths — in a country with fewer than 5% of the world's inhabitants — now accounts for nearly one-third of all the known lives lost worldwide to the pandemic.

According to a mortality analysis by Johns Hopkins University's Coronavirus Resource Center, about 6% of the nearly 1.7 million people who have tested positive for the coronavirus in the U.S. have succumbed to the disease.

Public health experts said the coronavirus has exposed the vulnerability of a wide range of Americans and the shortcomings of a U.S. health care system faced with a deadly pandemic.

"What is different about this is, it is affecting all of us in a variety of ways, even if some of us are able to social distance in more effective ways than others," said sociology professor Kathleen Cagney, who directs the University of Chicago's Population Research Center. "But we all feel at risk."

Even some who are well-acquainted with earlier health scourges in the U.S. were caught off guard by this one.

"I think anybody who understands anything about infectious disease recognizes that we were going to sooner or later face something like this," said John Barry, a professor at Tulane University School of Public Health and Tropical Medicine and author of The Great Influenza: The Story of the Deadliest Pandemic in History, on NPR's Fresh Air earlier this month. "But, you know, intellectually understanding it is one thing, and having it hit you is something quite different."

People have died from the disease in all 50 states and most U.S. territories. But the impact has been felt unevenly. Demographic statistics that the Centers for Disease Control and Prevention has posted of the first nearly 69,000 fatalities show some striking disparities:

— The disease has been far deadlier for males than females. For age groups up to 75 years old, about twice as many men and boys have been killed by COVID-19 as have women and girls.

— Older people have died in much greater numbers than those who are younger. Eighty percent of the known fatalities were at least 65.

— Racial and ethnic disparities in who is dying have also become apparent, even while tracking data that Johns Hopkins has compiled remain incomplete.

In Alabama, for example, 44% of those killed by COVID-19 were black in a state where fewer than 27% of its residents are African American. Similarly, while African Americans make up 14% of Michigan's population, they account for 40% of that state's COVID-19 fatalities. 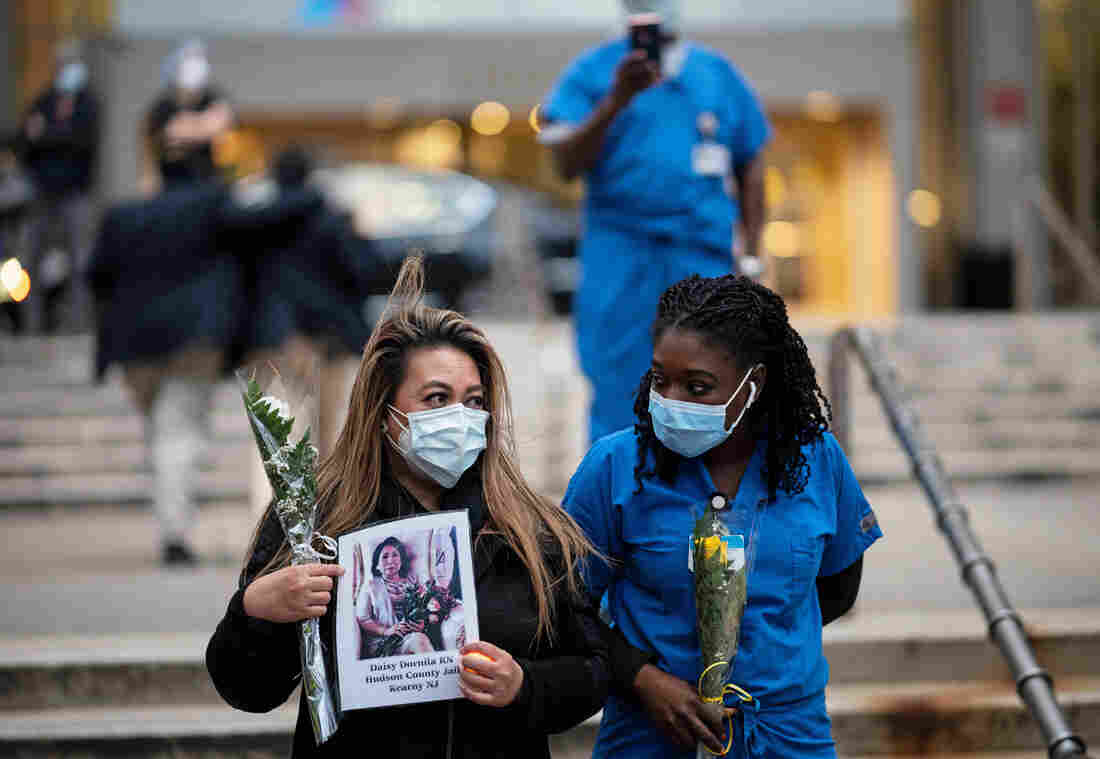 Nurses and health care workers mourn colleagues who died during the pandemic at a demonstration in April outside Mount Sinai Hospital in Manhattan. Johannes Eisele/AFP via Getty Images hide caption 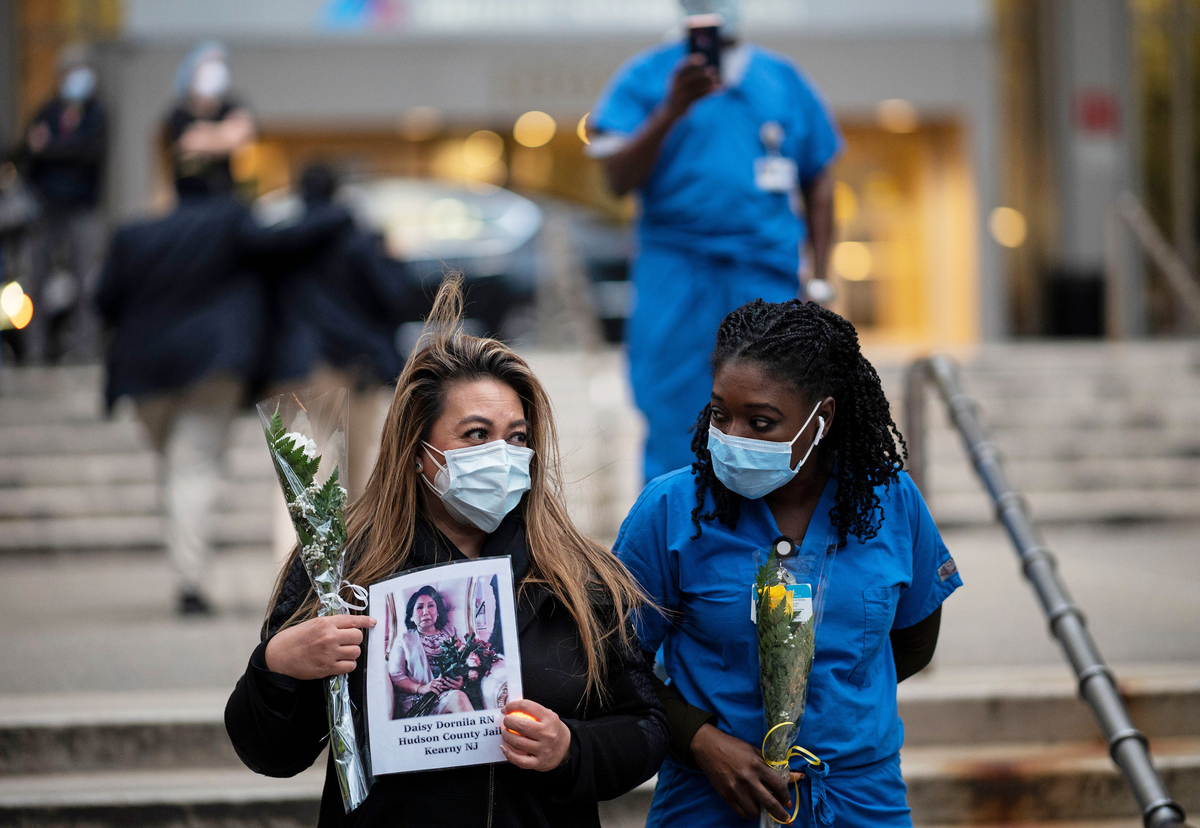 Nurses and health care workers mourn colleagues who died during the pandemic at a demonstration in April outside Mount Sinai Hospital in Manhattan.

Native American communities have also been hit especially hard by the pandemic. In Arizona, Native Americans account for about 5% of the population but make up nearly 17% of that state's COVID-19 fatalities.

The University of Chicago's Cagney said that differences in socioeconomic status — and thus the ability to practice social distancing — are contributing to COVID-19's uneven lethal impact.

The degree of devastation wrought by the pathogen has taken even some public health experts by surprise.

"Back in March, I did not think this would be possible — I was not expecting 100,000 deaths," said Christopher Murray, director of the Institute for Health Metrics and Evaluation at the University of Washington.

"I really believed we as a nation would have taken the decision to put in place social distancing and accepted the economic hardship that it's creating, and that we would have stuck to it to get transmission down to a very low level."

A study done this month by a Columbia University research team suggests the number of coronavirus deaths in the U.S. could have been considerably lower had Americans been told sooner to stay home and maintain social distancing.

A "pre-print" version of the report — meaning it has yet to be peer-reviewed — finds that "55% of reported deaths as of May 3, 2020, could have been avoided if the same control measures had been implemented just one week earlier."

"The lesson isn't what this means for the next time we have a pandemic with a new virus," said Jeffrey Shaman, one of the study's co-authors. "The lesson is really what are we doing with this virus as we move forward that it isn't going anywhere and that we still have to contend with it."

A roller-coaster ride of presidential predictions

The number of Americans killed by the pandemic appears to be a sensitive subject for a president seeking reelection in November. His predictions have gone up and down several times. 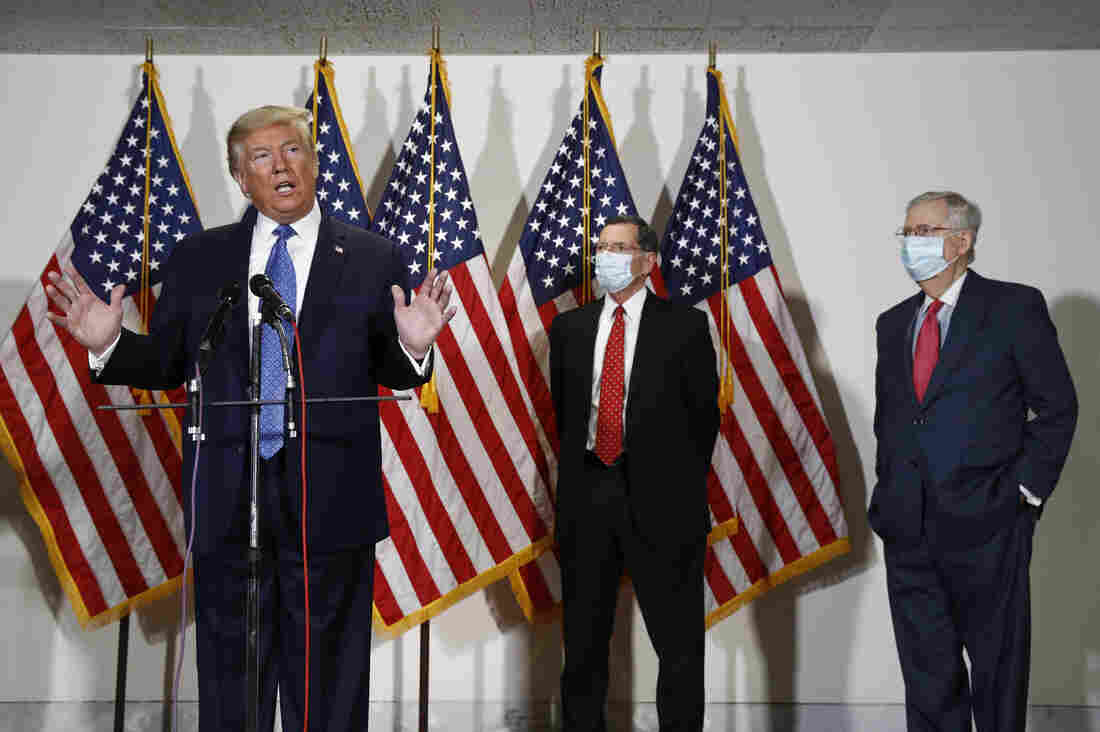 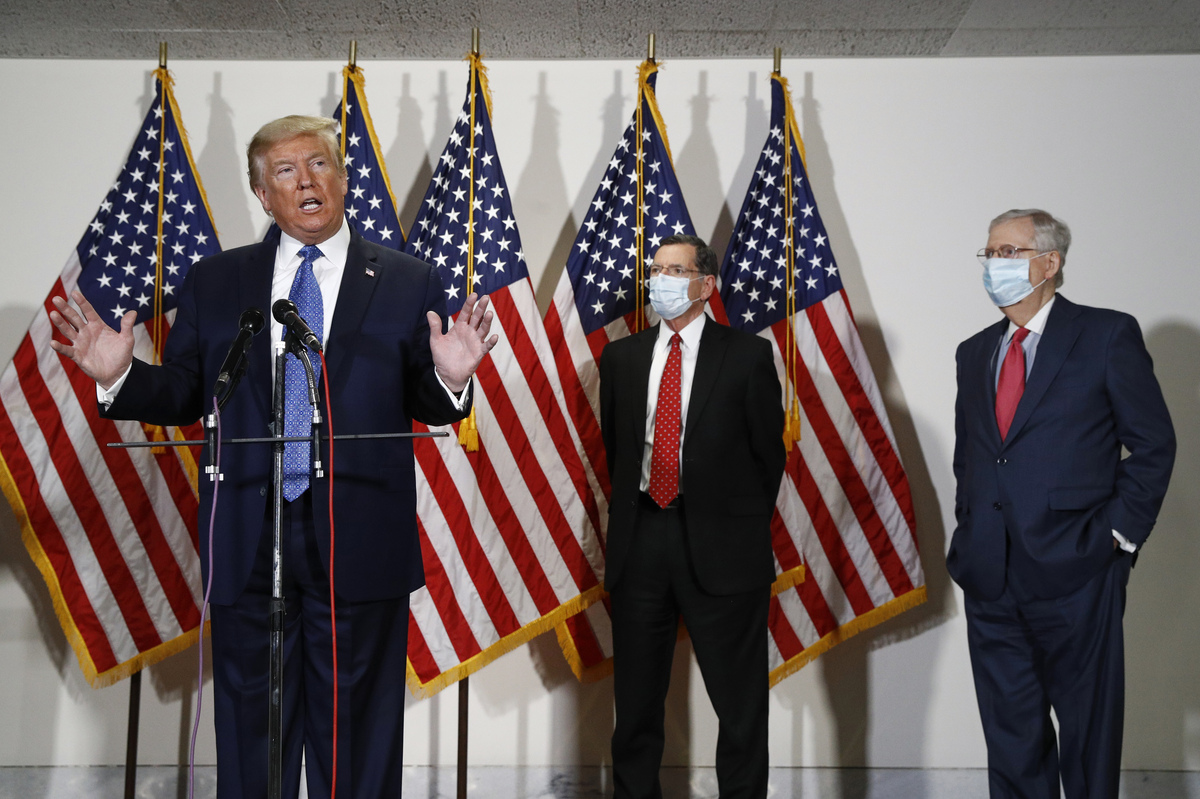 President Trump speaks to reporters May 19 after meeting with Senate Republicans at their weekly luncheon on Capitol Hill. Sen. John Barrasso, R-Wyo., and Senate Majority Leader Mitch McConnell stand at Trump's side.

Five weeks later, on Feb. 27 — almost a month after the World Health Organization declared the COVID-19 outbreak a "public health emergency of international concern" — Trump continued to downplay the threat posed by the coronavirus.

"You have 15 people, and the 15 within a couple of days is going to be down to close to zero," Trump declared at a White House coronavirus task force briefing. "That's a pretty good job we've done."

But the numbers kept rising. By the end of March, with the WHO having already declared a global pandemic, Johns Hopkins was reporting more than 188,000 confirmed coronavirus infections in the U.S. and some 5,500 deaths.

That was when Trump executed an abrupt U-turn in his effort to manage public expectations: For the first time, he broached the possibility that the pandemic — far from nearing zero — could indeed end up claiming 100,000 U.S. lives.

Speaking from the White House Rose Garden on March 29, Trump cited new mortality projections by Dr. Deborah Birx, response coordinator for the White House coronavirus task force, and Dr. Anthony Fauci, director of the National Institute of Allergy and Infectious Diseases. The two had predicted that if no preventive measures were taken, the pandemic could cause 2.2 million deaths in the U.S.; if such measures were taken, the toll could be between 100,000 and 200,000 deaths over an unspecified period of time.

Three weeks later, amid mounting pressure from supporters to reopen the economy, Trump was back to lowering public expectations about how many lives the pandemic might claim.

Trump appeared to be relying on one of the lowest of a dozen fatality estimates at the time, a range of 60,000 to 115,000 deaths modeled by the University of Washington's Institute for Health Metrics and Evaluation. 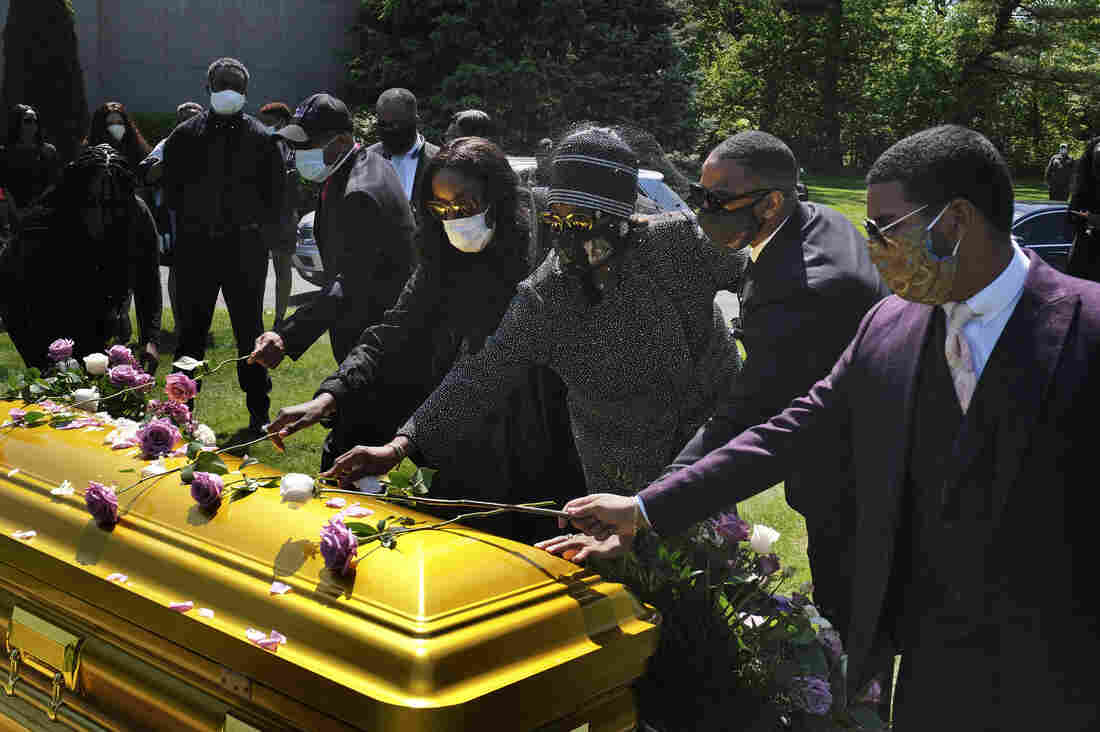 Family and friends lay flowers on the casket of Bishop Carl Williams Jr. last week at Hollywood Memorial Park and Cemetery in Union, N.J. Only a few family members were permitted to attend the service in person due to the pandemic. Seth Wenig/AP hide caption 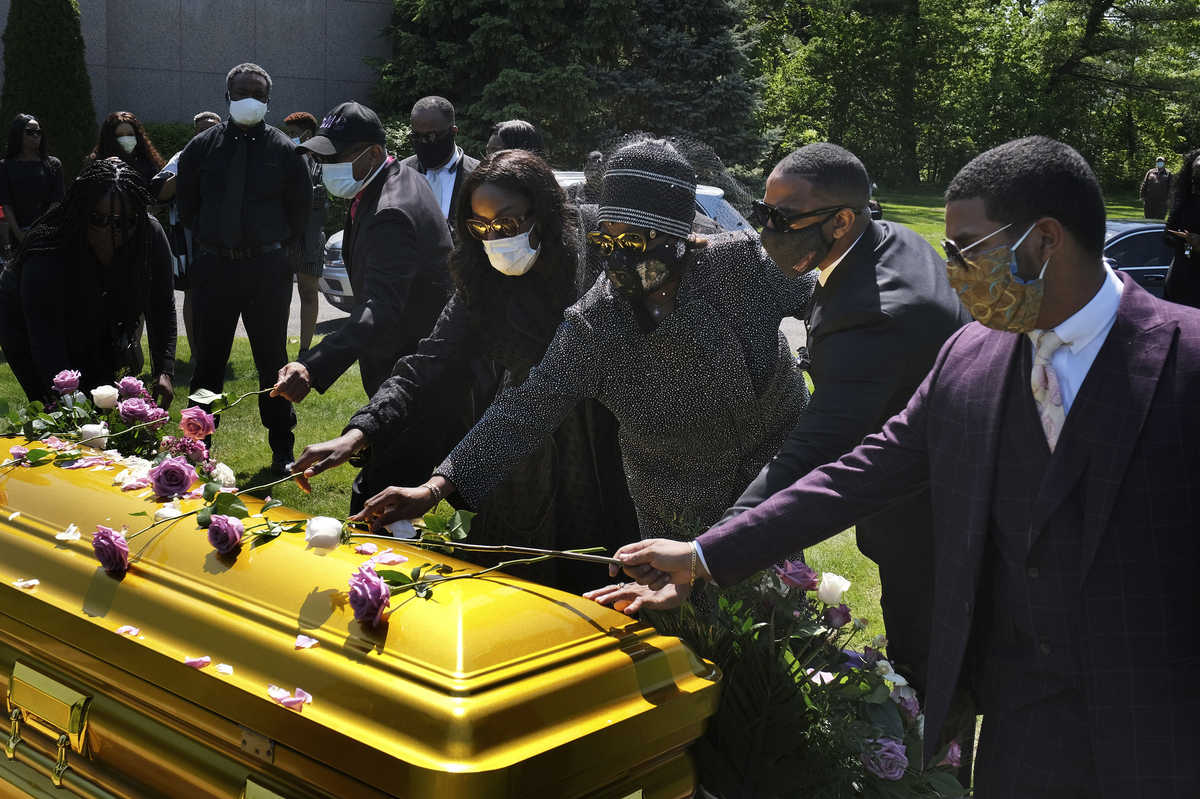 Family and friends lay flowers on the casket of Bishop Carl Williams Jr. last week at Hollywood Memorial Park and Cemetery in Union, N.J. Only a few family members were permitted to attend the service in person due to the pandemic.

But a week later, with social distancing measures being eased, the institute practically doubled those projected numbers, forecasting that nearly 135,000 — and possibly as many as 242,890 — people would die by August in the U.S. from COVID-19.

The institute's Murray said the earlier calculations had been made assuming every state would hold off on loosening social distancing measures until new infections had dropped to a very low level.

"But even before people started relaxing the mandates, people start changing their behavior as the national discussion about reopening the economy became pretty dominant," said Murray, adding that his team realized keeping those mandates in place until early June "was just not going to happen. And so that's what led to our major change in the modeling's strategy and assumptions."

Trump, for his part, once again raised his predictions about how many lives in the U.S. the pandemic would claim.

By mid-May, all of the dozen forecasting models for COVID-19 deaths in the U.S. tracked by the CDC surpassed Trump's latest predictions.

"All forecast an increase in deaths in the coming weeks," CDC Director Robert Redfield, in his first public comment on expected deaths, tweeted on May 15. Every one of those models, he added, predicted "a cumulative total exceeding 100,000 by June 1."

Many more deaths expected — and funerals

With all 50 states now separately dropping some or all of their social distancing restrictions, health experts warn that the U.S. coronavirus death toll could climb much higher than the approximately 140,000 by August that many of them have been predicting. A man sets a candle outside the Otay Mesa Detention Center during a "Vigil for Carlos" on May 9 in San Diego. The vigil was held to commemorate Carlos Ernesto Escobar Mejia, who died of COVID-19-related symptoms at the detention center. Sandy Huffaker/AFP via Getty Images hide caption 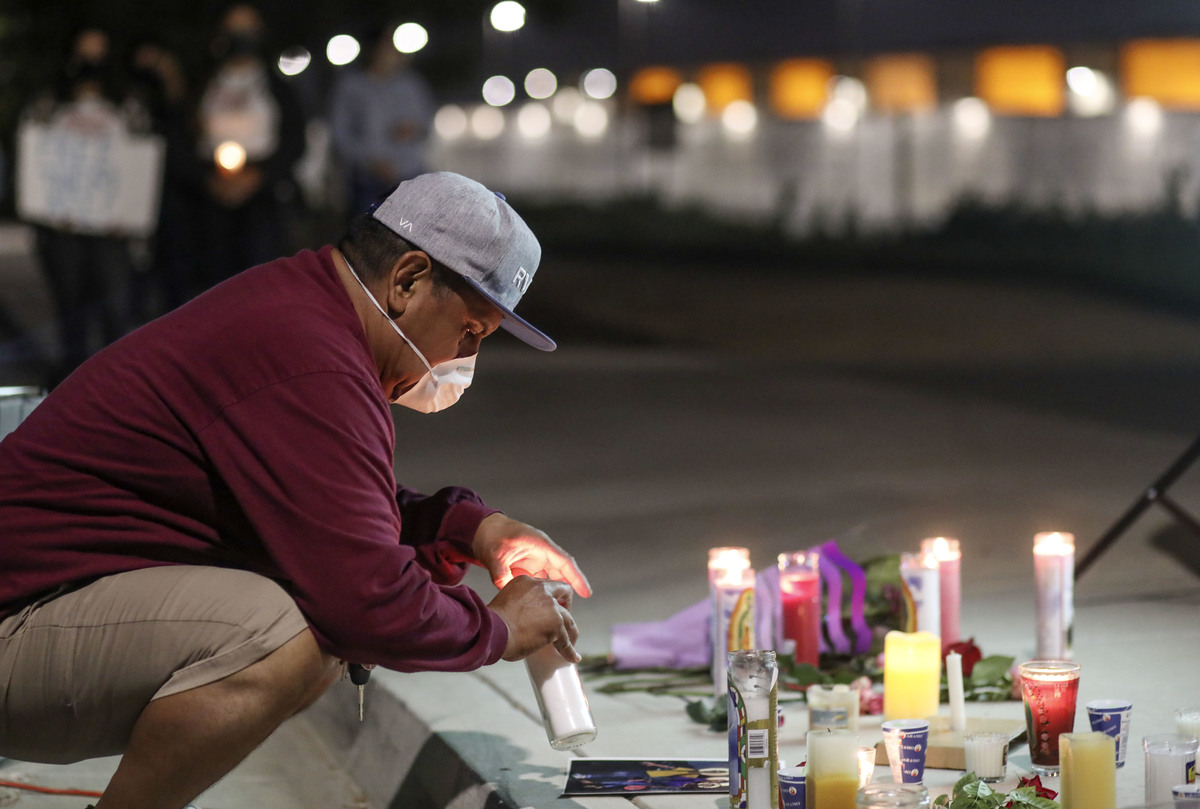 A man sets a candle outside the Otay Mesa Detention Center during a "Vigil for Carlos" on May 9 in San Diego. The vigil was held to commemorate Carlos Ernesto Escobar Mejia, who died of COVID-19-related symptoms at the detention center.

"Now we're almost getting the worst of both worlds — we're getting the economic hardship and we're relaxing," Murray said. "And it seems either now or in the fall, we're going to have a big second wave, and we'll be right back to dealing with pressure on the hospital system and dealing with, when is the peak surge coming?"

Columbia University's Shaman said the U.S. has to keep suppressing the spread of COVID-19 while having an acceptable level of a functioning economy.

"That's the hard problem we're trying to address as we try to figure that out and we loosen restrictions," Shaman said. "If we have these flare-ups, we have to be willing to immediately recognize them and tamp back down and not wait and not dither. And that goes both for communities that have experienced the virus already and those that have not experienced it as much."

And there's another challenge: Many of the 100,000 who have died have not yet had proper send-offs.

Jha said he expects that as the U.S. opens up from its social isolation, those who have grieved privately will be holding postponed funerals, burials and other commemorations.

"I think the sort of the weight of this calamity is going to become much more apparent to people in the upcoming days and weeks," Jha added. "So people are going to, I think, really come to grips with how awful these last couple of months have been."