Accessibility links
During Colombia's Coronavirus Lockdown, Needy Residents Signal SOS With Red Rags "It's not just city hall that has to act. You have to promote solidarity among neighbors," says a mayor who encourages residents sheltering in place to hang red rags so others will know to help them. 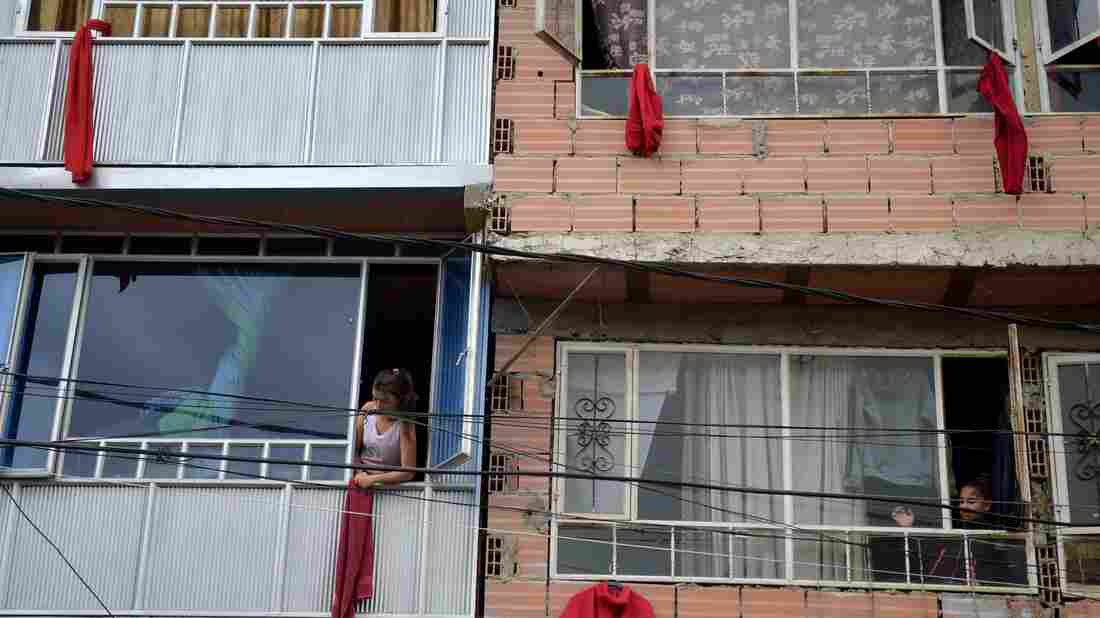 Residents of the Colombian capital Bogotá hang red rags from their windows and balconies to signal their need for help with food during the coronavirus pandemic. Raul Arboleda/AFP via Getty Images hide caption 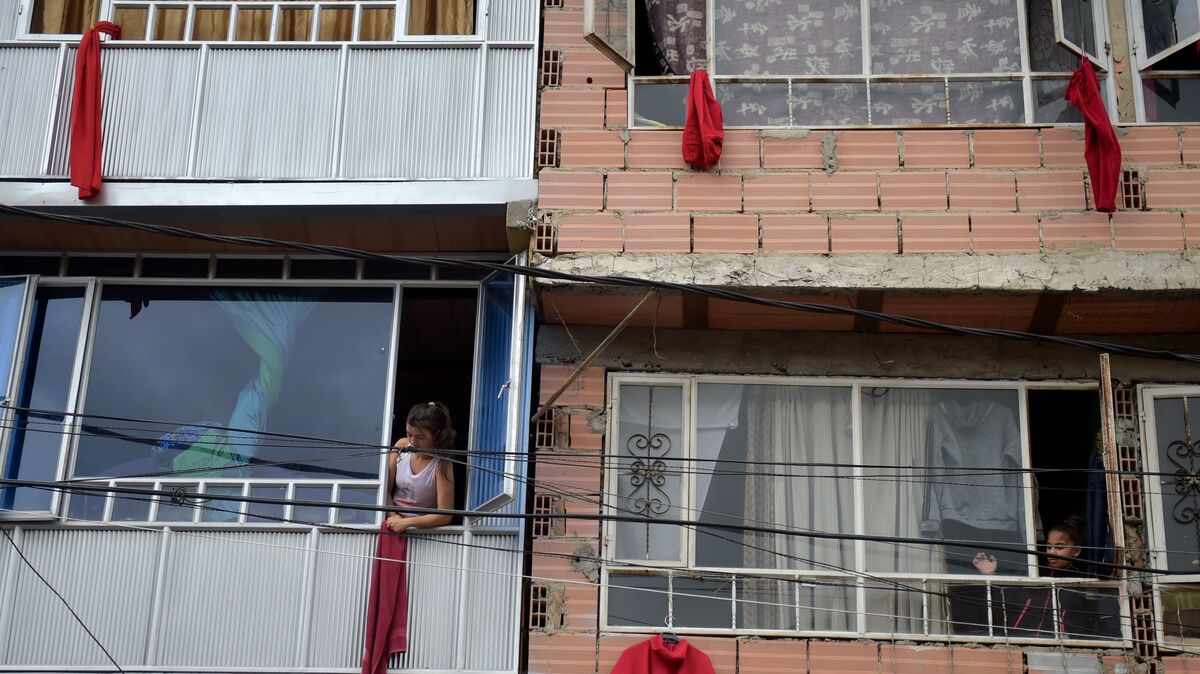 Residents of the Colombian capital Bogotá hang red rags from their windows and balconies to signal their need for help with food during the coronavirus pandemic.

With COVID-19 deaths spiking in many Latin American countries, Colombia — which has confirmed more than 23,000 cases and 776 deaths — is extending its nationwide lockdown until the end of this month. That has meant more hardship for people living hand to mouth.

So some desperate Colombians have been sending out an eye-catching SOS — with encouragement from local politicians.

In a sprawling mountainside slum in Soacha, just south of the capital Bogotá, needy families tie or hang something red from their doors, windows and balconies — a red T-shirt, a red dishtowel, even red pajamas — as a distress signal to neighbors who may be willing and able to provide them with food.

"They will ask: 'Do you need tomatoes? Take some! Do you need onions? Take the onions!' " says one grateful recipient, María Mendoza, who sold magazines and used clothes before the lockdown but now depends on handouts to feed her family of four. "And when I have some extra food, I do the same."

Soacha's "red-rag movement," which started in March, was the brainchild of Mayor Juan Carlos Saldarriaga. He manages a city of more than 1 million mostly poor and working-class people. Some were displaced from their farms and villages by Colombia's long guerrilla war. Thousands are refugees from Venezuela's economic meltdown.

Working from home is not an option, since many earn a living as maids, security guards, bus drivers and factory workers. Others sell candy or wash windshields for spare change at intersections.

Few residents have much in the way of savings. To convince them to shelter in place, the mayor said, food donations are key.

"I have always said that more people here could end up dying of hunger than from the coronavirus," Saldarriaga says.

He knows his city well. Saldarriaga, 47, grew up in a poor household but graduated from law school and then jumped into politics. He took office in January, before the coronavirus began spreading through Colombia.

Saldarriaga began organizing massive food handouts in March. Soacha's city hall has so far handed food to 350,000 families, but city workers can distribute rice, beans, pasta and other provisions to only about 6,000 families per day. So the mayor called on the neediest to fly makeshift red banners from their doors and windows as a signal for immediate help.

"It's not just city hall that has to act," he says. "You have to promote solidarity among neighbors."

Since then, the red-rag movement has spread to Bogotá, Medellín, Barranquilla, Florencia and other cities. Under a similar initiative in Guatemala, families that are going hungry fly white flags. 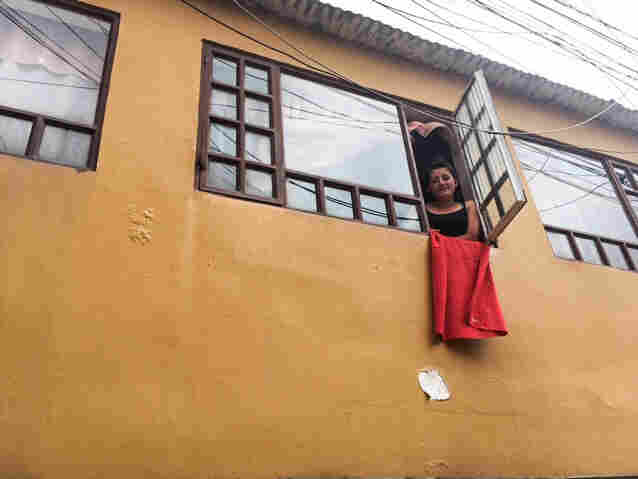 A Soacha resident hangs a red cloth out the window. "I have always said that more people here could end up dying of hunger than from the coronavirus," Soacha Mayor Juan Carlos Saldarriaga says. John Otis/NPR hide caption 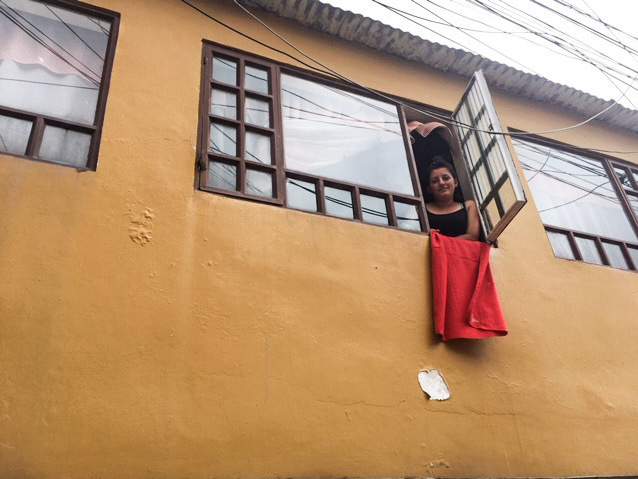 A Soacha resident hangs a red cloth out the window. "I have always said that more people here could end up dying of hunger than from the coronavirus," Soacha Mayor Juan Carlos Saldarriaga says.

In some Soacha neighborhoods, homemade red flags fly from nearly every building, including the cramped apartment of Ana Ibáñez. She explains that after the lockdown, her husband lost his job as a car mechanic and she's been unable to sell snacks and soda on the streets.

But, she says, "My good neighbors have given me sugar and rice."

Soacha's Friday night to Monday morning curfew is one of Colombia's tightest local restrictions. So far, Saldarriaga says, Soacha has registered just four deaths from COVID-19. And the food donations have kept residents from going hungry.

But some see the red flags as symbols of a tattered social safety net and government inefficiency.

"The red rags in the poor barrios are like red cards for the way policies have been put into place during the pandemic," former Bogotá Mayor Clara López wrote in Semana magazine, referring to the card used to expel players from soccer matches.

What's more, patience is growing thin among Soacha residents. Saldarriaga is constantly trying to calm the nerves of those who complain they haven't received any food. They're also angry about the weekend curfew and the national government's lockdown.

"I have debts. I have a special-needs daughter. I have bills to pays," says Diana Muñoz, who's itching to get back on the streets to sell roses.

But there are just 50 intensive care beds and few hospitals in Soacha. That's why Saldarriaga is refusing to budge — and is sticking with the red-rag program.

"People tell me: 'I don't want charity. I want to go back to work,' " he says. "But that would be like sending them to their deaths."