Accessibility links
As Lockdown Orders Lift, Can Cities Prevent A Traffic Catastrophe? As businesses reopen, many city dwellers worry about the risks of public transit. Cities are trying to figure out how to safeguard public health, keep people moving and avoid a gridlock nightmare. 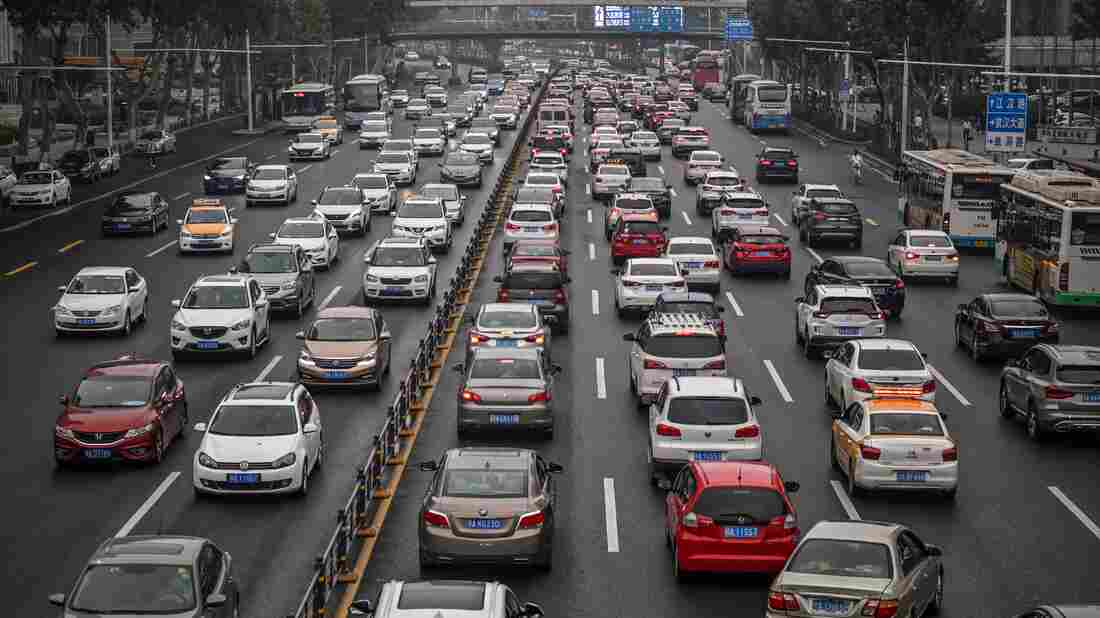 The city of Wuhan, where the coronavirus first began to spread, is pictured on May 14. Many Chinese cities have seen rush hour traffic return to pre-pandemic levels — or worse — after reopening, according to traffic data company TomTom. Cities around the world are trying to figure out how to avoid disastrous gridlock as residents resume travel while avoiding public transit. Hector Retamal/AFP via Getty Images hide caption 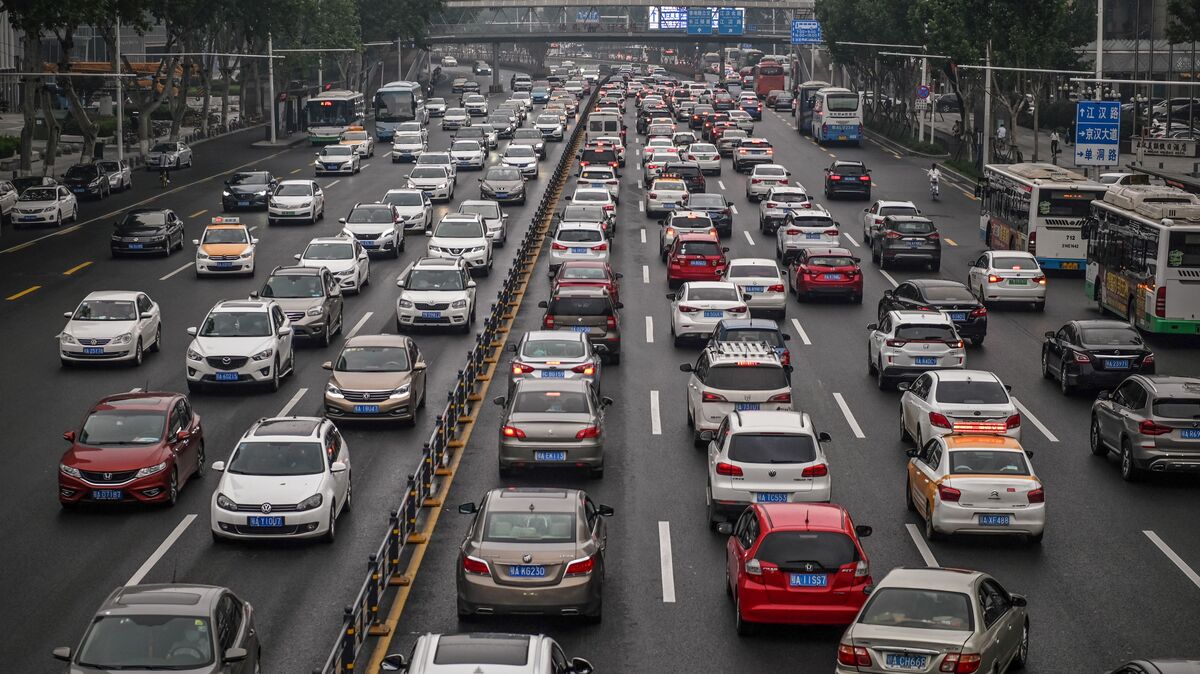 The city of Wuhan, where the coronavirus first began to spread, is pictured on May 14. Many Chinese cities have seen rush hour traffic return to pre-pandemic levels — or worse — after reopening, according to traffic data company TomTom. Cities around the world are trying to figure out how to avoid disastrous gridlock as residents resume travel while avoiding public transit.

Over the past few months, cities have had to deal with tremendous challenges — fighting a pandemic, preserving essential services, protecting their own workers, coping with devastating budget cuts.

One thing local officials didn't have to worry about was traffic, as the pandemic emptied city streets.

But that's about to change.

Many city dwellers, trying to maintain social distance, are continuing to avoid public transit. If they replace bus or subway trips with car rides, congestion could grow dire.

Eve Strother, a lawyer in Boston, says she won't be getting on the T anytime soon. She's worried about being close to people who refuse to wear masks or follow social distancing guidelines. "It's kind of scary to not know how your commute will go," she says.

Strother feels much safer in her car.

Some cities in China have already seen rush hour traffic significantly worse than before the pandemic.

"We could really see an outcome from this where we have crushing gridlock," says Corinne Kisner, the executive director of the National Association of City Transportation Officials. The organization recently released a guide for cities on how to adapt to the ongoing coronavirus crisis and the recovery ahead.

Normally, cities would respond to growing traffic by trying to boost rides on buses or subways.

"Being able to move more people in the least amount of space has been the mantra of transit agencies around the world," says Tiffany Chu, the CEO of transportation planning software company Remix. "And now all of a sudden with COVID, because you have to socially or physically distance, that mantra just no longer holds up. And it's mind-boggling for people who've been working in transportation for decades."

There's no silver bullet to solve this problem, but one key strategy is to push more people to travel by bike, foot or scooter instead of by car.

Cities like London and Paris, which have already committed to supporting bicycle travel, have accelerated their plans to build bike lanes to help reduce future pandemic-worsened traffic jams.

In the U.S., in contrast, many cities have so far focused on urgent needs during the pandemic shutdowns, instead of the crowding that may come after. Cities from Oakland to Boston have taken street space previously reserved for cars and used it to reduce crowding and promote social distancing — from expanding sidewalks to using parking lots as dining spaces.

New York City Is Latest To Close Some Streets To Cars, Making More Space For People

But some of these measures, particularly "slow streets" or "open streets" reserved for non-car traffic, could also help replace car trips and reduce traffic in the long term.

Seattle, which blocked through traffic on some roads and dubbed them Stay Healthy Streets, was the first major U.S. city to announce it would make the pandemic-induced changes permanent.

"The support and the positivity we got in just the first few weeks of putting these out meant that it ... was pretty easy to say, 'Let's make this permanent,' " says Sam Zimbabwe, the director of Seattle's Department of Transportation.

The streets were meant to support both recreation and travel needs, he says, but as more people resume daily travel, "the transportation aspects will probably grow in importance," he says.

Seattle was building on an established network of greenways and bike paths, and many cities have similarly used existing plans and policies as a launching pad.

"I think cities have been really proactive and sort of standing up projects and initiatives essentially overnight — or within a week or so," says Zabe Bent, the director of design at the National Association of City Transportation Officials. "Open streets, shared streets, bike lanes ... projects that can can just be moved forward a lot faster because there are fewer people traveling on our streets by car."

Meanwhile, public transit remains crucial — particularly for communities hardest hit by the coronavirus. Many essential workers live far from their workplaces and don't have access to a car.

"I think some of the rhetoric I've been hearing in the transportation world — and I don't think this is intentional — is almost painting transit as sacrificial ... [that] it's not going to be safe for a long time; we've all got to get on bikes," says Lynda Lopez, an advocacy manager at the Active Transportation Alliance in Chicago. "I think we need to realize that public transit is a core part of how people move, especially in communities that don't have other options."

Safety measures, from masks to extra cleaning, can help keep transit as safe as possible for essential riders — and vulnerable transit workers. Kisner, of the National Association of City Transportation Officials, says cities can also increase the frequency of buses or trains, add bus lanes and redesign their bus routes to better serve essential workers who rely on transit services — not just 9-to-5 office workers.

"A lot of transit systems haven't really changed their network design in, frankly, decades," she says. "It's been a very slow and gradual process."

Now, moving slowly isn't an option for cities that want to keep up with a world transformed by the coronavirus.

Tamika Butler is the head of California planning and equity and inclusion at Toole Design, a consulting firm that helps cities with transportation planning, especially for biking and walking. She says community input is essential as cities are moving with unprecedented speed.

"There has to be a balance between answering the call and doing what folks need while still not re-creating processes that continue to exclude people," she says.

Done properly, she says, this is an opportunity to address the underlying inequities that have long shaped American cities, and not just keep streets moving, but make them more accessible — and safer — for everyone.