Accessibility links
Why Parts Of Rural America Are Pushing Back On Coronavirus Restrictions Conservative challenges to statewide stay-at-home orders are mounting in counties that have few coronavirus cases. "This has become a rural versus urban issue," political scientist Kathy Cramer says.

Listen · 5:07 5:07
Why Parts Of Rural America Are Pushing Back On Coronavirus Restrictions 5:07 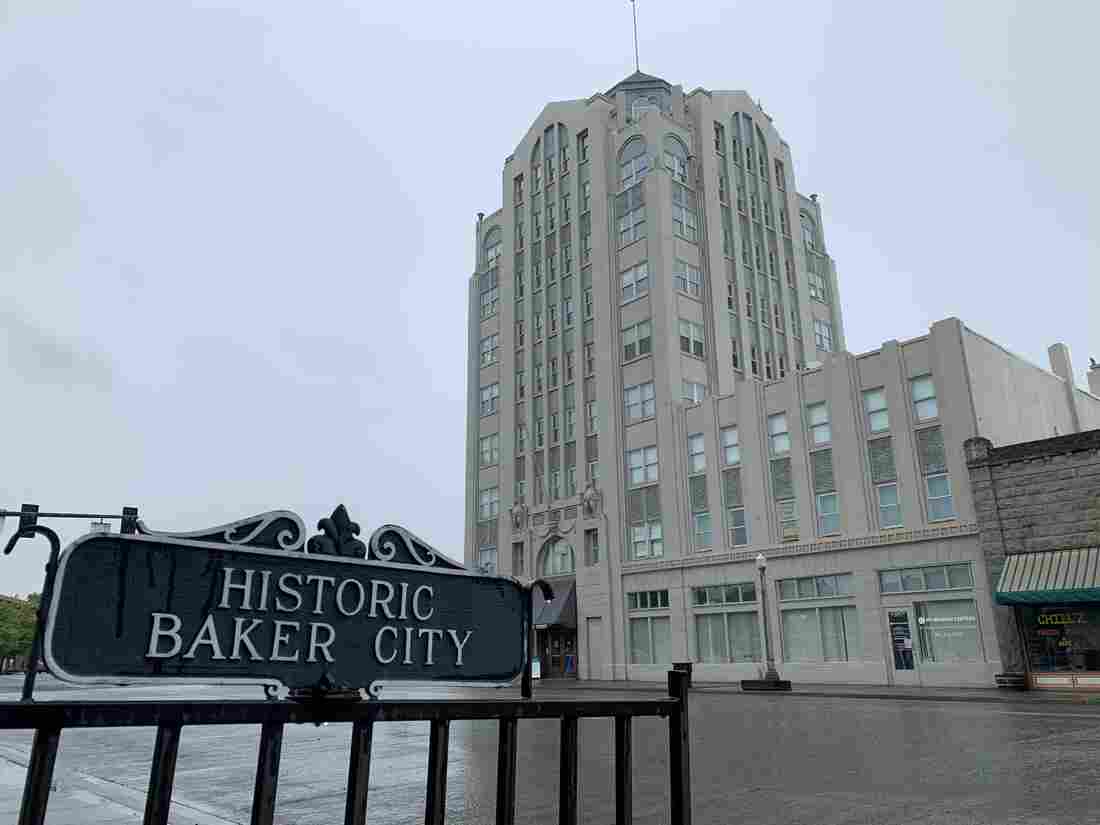 A judge in Baker City, Ore., ruled that Gov. Kate Brown had acted beyond her authority by extending the state's stay-at-home restrictions. Kirk Siegler/NPR hide caption 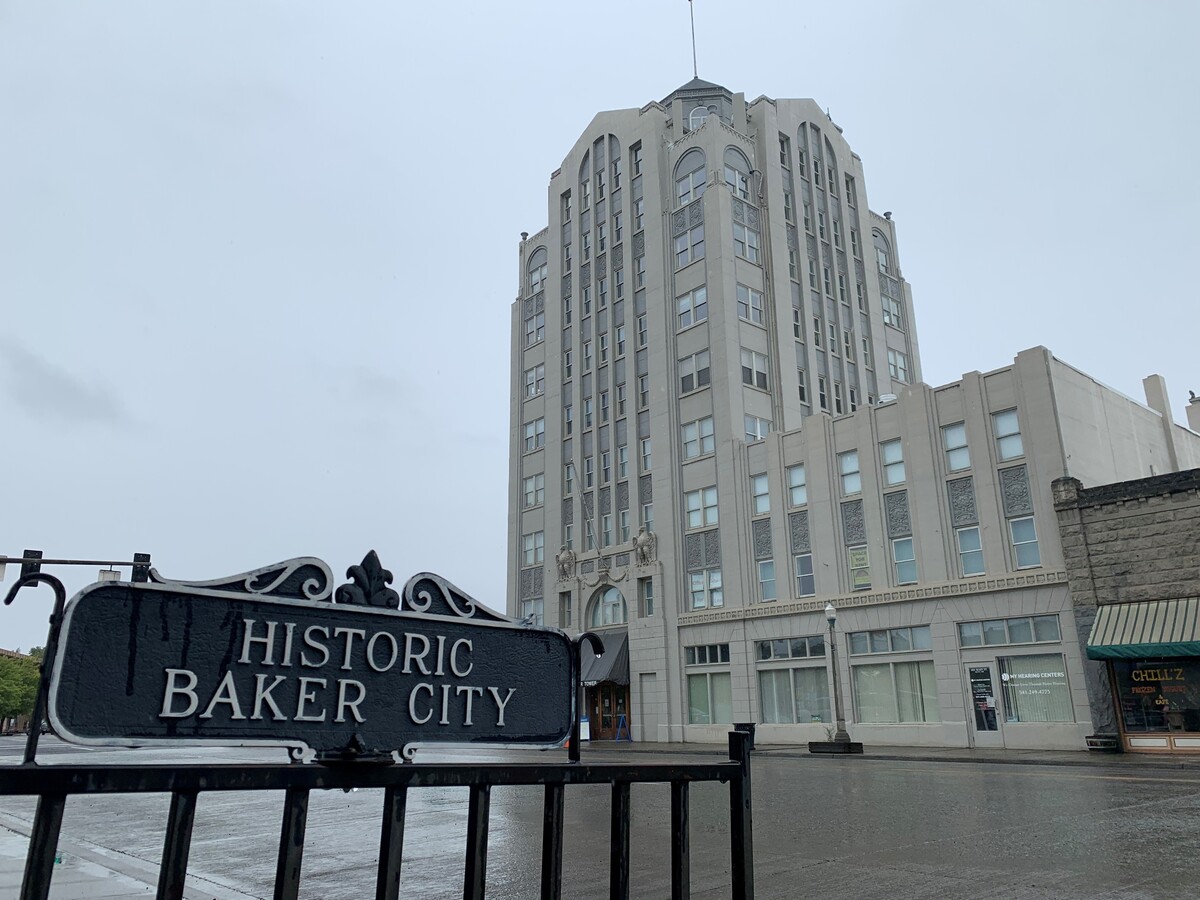 A judge in Baker City, Ore., ruled that Gov. Kate Brown had acted beyond her authority by extending the state's stay-at-home restrictions.

A county judge in Oregon has refused to vacate his ruling rejecting that state's stay-at-home order, though Gov. Kate Brown's restrictions will remain in place pending a review by the Oregon Supreme Court.

The case is one of several challenges launched recently by conservatives in mostly rural areas from Illinois to Wisconsin to Oregon. They've upended or threatened to upend statewide public health restrictions in place to curb coronavirus infections. They also appear to be bringing the divide between urban and rural areas into sharper focus.

For instance, Baker County, from where Oregon's most recent challenge stemmed, has one confirmed COVID-19 case.

"We have no vile threat that it's going to be expanding around here, so why in God's name are you still holding us to restrictions?" asked Bill Harvey, chair of the Baker County Commission.

Harvey, a Republican, signed onto his state's most recent lawsuit that was originally brought by Oregon churches, including Elkhorn Baptist in Baker City. The judge ruled last week that under state law, the governor must consult the Legislature before extending her emergency restrictions beyond 28 days.

The statewide order is back in place for now pending an appeal.

"You don't have the threats you would have in a major city," Harvey said. "You can't judge or control our atmosphere based on what you think the Portland area should be." 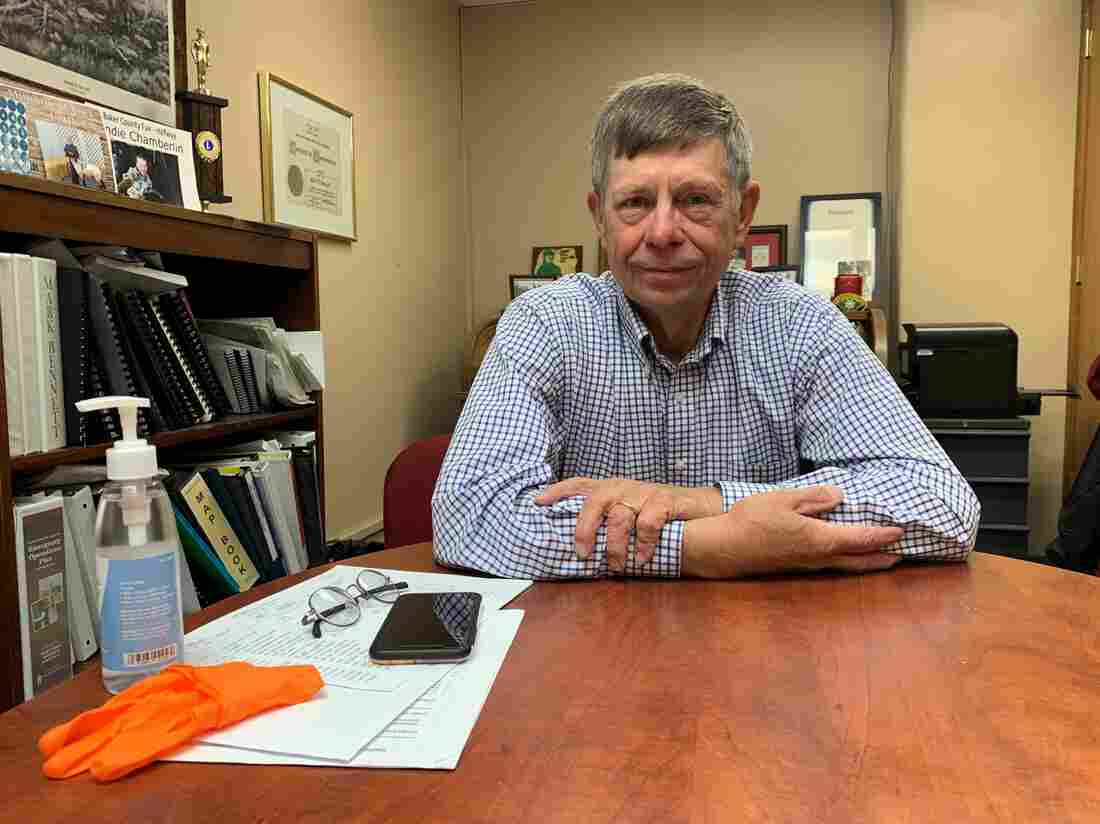 Baker County, Ore., Commissioner Mark Bennett had a cousin from the East Coast who died from the coronavirus. Kirk Siegler/NPR hide caption 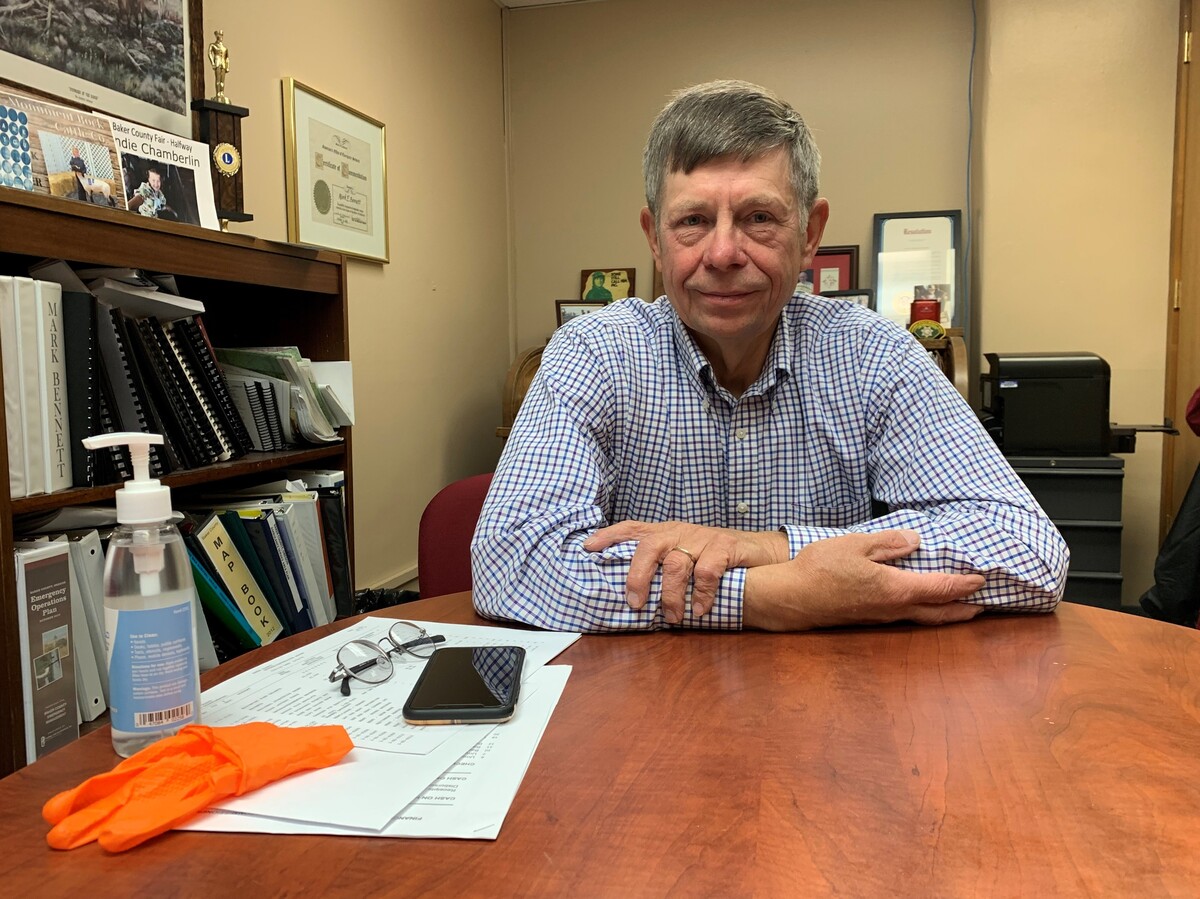 Baker County, Ore., Commissioner Mark Bennett had a cousin from the East Coast who died from the coronavirus.

"A rural versus urban issue"

Baker County, with a population of about 17,000, is some 300 miles east of the liberal-leaning Portland metro area. Along the old Oregon Trail, tourism is big here. So is cattle ranching. Both have been hammered economically by the shutdown. Summer rodeos, fishing tournaments and fairs are canceled, among other things.

"This has become a rural versus urban issue," said Kathy Cramer, a University of Wisconsin-Madison political scientist.

Cramer recently wrote a book called The Politics of Resentment, focusing on her state's urban-rural divide. Cramer said there's general mistrust toward government regulations in rural America. And now coronavirus restrictions are being written that look to some like they were crafted only with city folks in mind.

"The idea that the government is not attentive enough to the actual challenges of rural communities is not new," Cramer said. "The pandemic seems to have deepened some of the resentment that's been there for a long time."

Oregon's urban-rural divide has long been tense. In eastern Oregon these days, it's not uncommon to see a big Trump 2020 banner on the back of a pickup or even Confederate flags flying in yards. Conservative state lawmakers recently made headlines for retreating to Idaho to avoid voting on climate change legislation. In Baker City, you still hear anger over a timber mill that shuttered more than a decade ago, in part as a result of a steep decline in logging on federal land.

Yellowstone National Park Set To Reopen — But With Caveats

Kayla Keith, who works at a cafe, wasn't too surprised one recent day when she was pumping gas at a Maverick station and got grief from a neighbor for wearing a mask.

Keith lives with her elderly parents — her mom is diabetic and dad has lung issues.

"If they caught this, I don't like their odds," Keith said. "I wear a mask for the obvious reasons; you want to protect everybody else."

In a divided country, in a divided town even, something as small as wearing a mask can mark you on one side or the other: red versus blue, pro-science versus anti-science; you're taking the virus seriously or you think it's overblown.

"We only have one person who's been affected by the virus in Baker County, and you can't tell us we have to live under the same restrictions as a city. That's ridiculous," said Harvey, the commission chair.

Still, in Baker City, you see plenty of folks wearing masks in grocery stores and other places.

At the old stone courthouse, Republican County Commissioner Mark Bennett, the county's incident commander for the pandemic, said it's a misnomer that people in rural places aren't taking the virus seriously because they don't know many who have been affected.

It turns out a cousin of Bennett's from back East died from it.

"Part of it is, I have to admit, she didn't take medical services," he said. "She just thought she could tough it out, and by then it was too late." 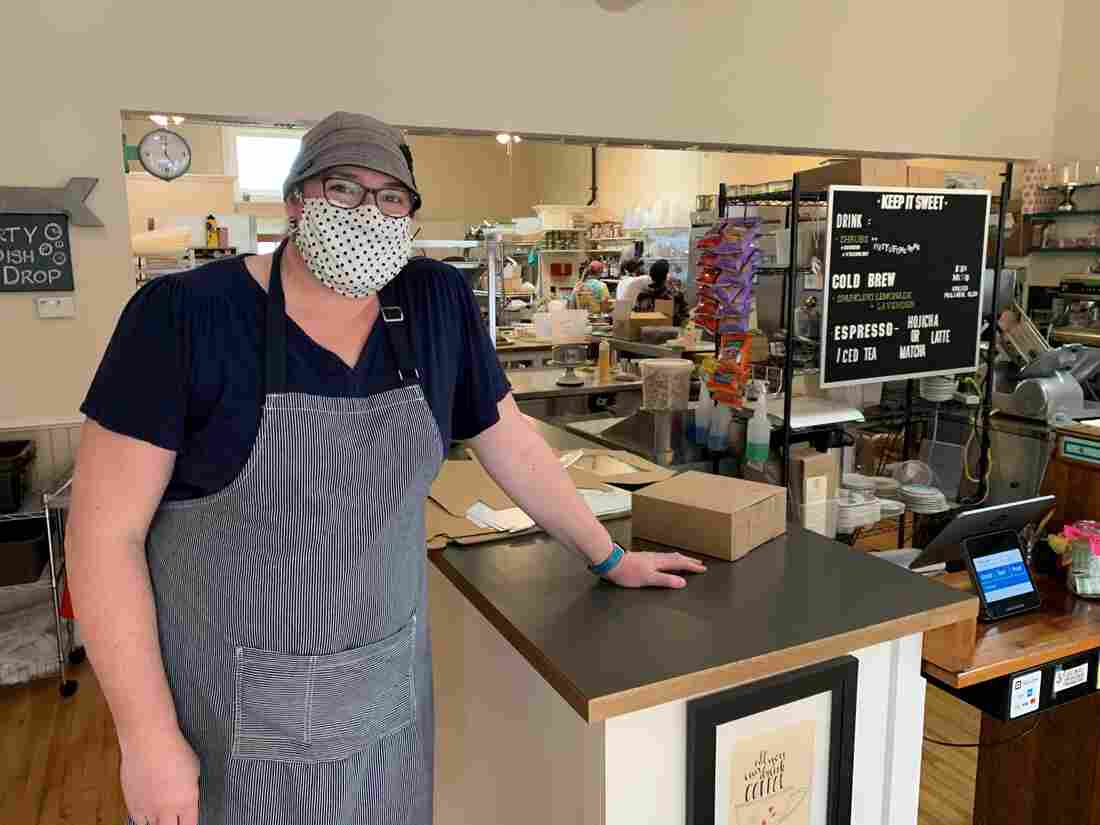 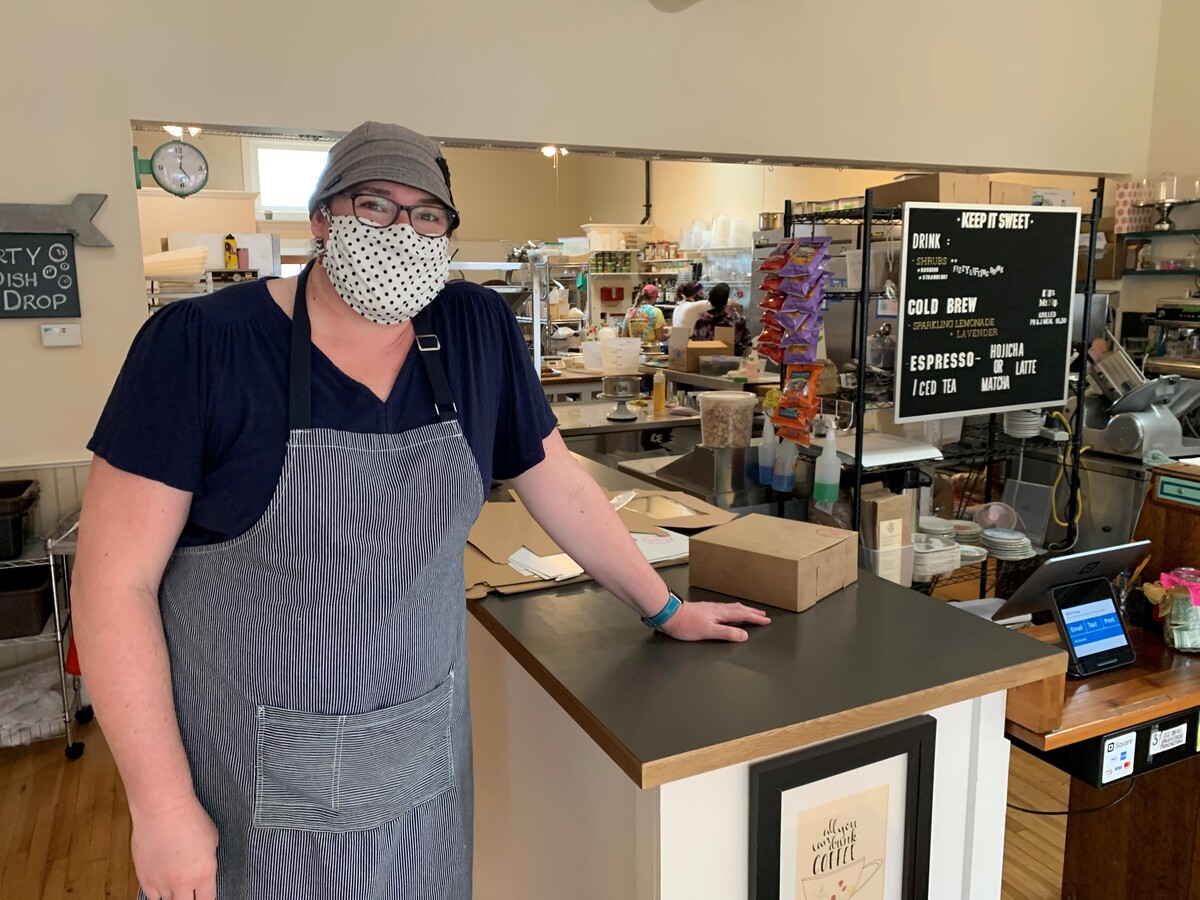 Jenny Mowe, owner of Sweet Wife Baking in Baker City, decided to stay open and offer takeout and other services during the pandemic.

"We should be acting as a collective"

Bennett led a proposal to begin reopening the county that the governor recently approved despite the lawsuit against the statewide restrictions. They added almost 50 hospital beds and hired more than the required number of contact tracers. Bennett said social distancing is mostly a way of life here anyway.

"I have a 52-mile commute every day. I think I passed one car," he chuckles.

Officials such as Bennett downplayed the rural-urban fights in the news media.

A few businesses in town have been able to stay open since March, and many more are now beginning to reopen. But just like everywhere else in the country, these are tough times.

Jenny Mowe, owner of Sweet Wife Baking, cleared out her cafe to create a contact-free ordering area. Many of her employees were furloughed, and most of her contracts with area restaurants were canceled.

Talking through her mask, Mowe said she is turned off by all the political fights. It's stressful enough trying to survive and adapt her business right now.

"I think when you get such a divisive message from leadership, that really hurts something like this," said Mowe, a former professional women's basketball player and University of Oregon star. "We should be acting as a collective and [saying] this is what we're doing as a country to get through this."

For now, Mowe is just trying to get through the week and keep her doors open, let alone the next few months.