Accessibility links
Possible Conflicts Of Interest In Pandemic Work For Pence Staffer Marc Short Marc Short has between $506,043 and $1.64 million in stocks that could present conflicts of interest. Watchdogs say he needs to divest or recuse himself from issues that may impact his holdings.

Listen · 3:56 3:56
Pence Chief Of Staff Owns Stocks That Could Conflict With Coronavirus Response 3:56 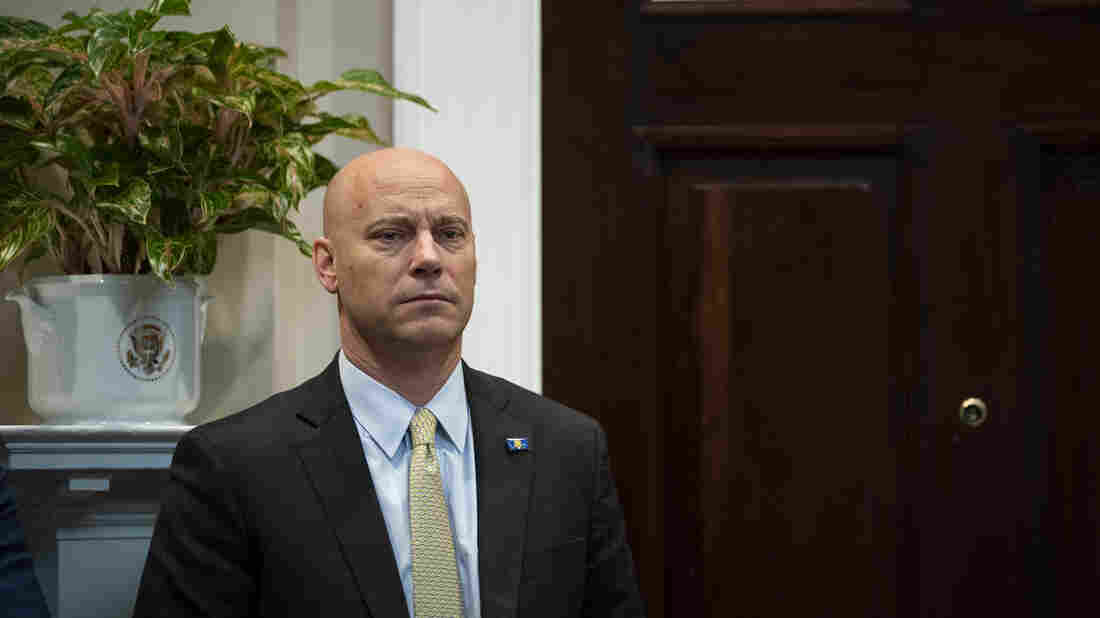 Marc Short, chief of staff to Vice President Pence, listens during a coronavirus briefing with health insurers at the White House on March 10. Al Drago/Bloomberg via Getty Images hide caption 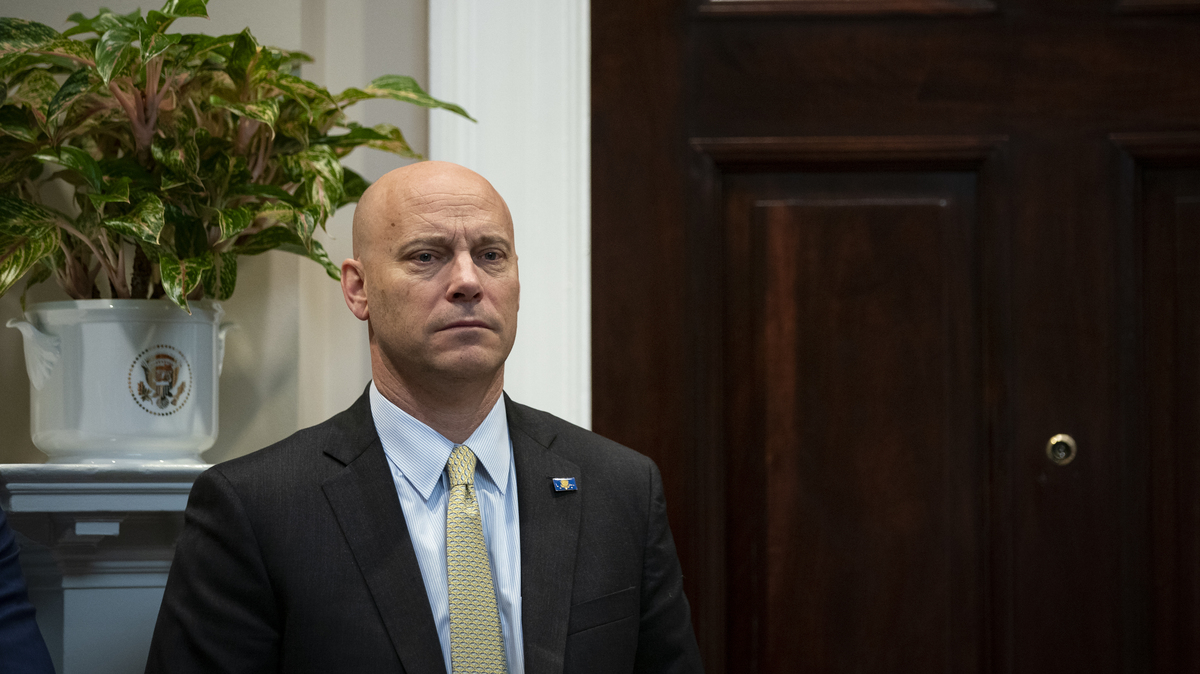 Marc Short, chief of staff to Vice President Pence, listens during a coronavirus briefing with health insurers at the White House on March 10.

Marc Short, the chief of staff to Vice President Pence, owns between $506,043 and $1.64 million worth of individual stocks in companies doing work related to the Trump administration's pandemic response — holdings that could run afoul of conflict of interest laws.

Many of the medical, pharmaceutical and manufacturing companies – including 3M, Abbott Laboratories, Gilead Sciences, Procter & Gamble, Medtronic, Bristol Myers Squibb and Johnson & Johnson – in which Short and his wife hold stock have been directly affected by or involved in the work of the coronavirus task force chaired by Pence.

Other companies among his holdings, such as CVS, Thermo Fisher Scientific, Walmart and Roche, have been publicly touted by the White House for their work with the federal government on the coronavirus response.

Short declared at least some of his stock holdings — more than 100 listings of individual stocks across a range of economic sectors — to be potential conflicts of interest after he joined the vice president's office last year. But he did not divest those holdings after being denied a tax break often granted to government officials who must sell stock to comply with ethics laws.

Short still holds the stocks — some in trusts for family members — which he disclosed in public records reviewed by NPR. The White House contends he has followed administration guidelines to avoid conflicts of interest.

"Marc Short has followed all applicable ethics laws, and even sought to divest from potential financial conflicts," said Pence spokesman Devin O'Malley. "Additionally, on several occasions, including since the formation of the coronavirus task force, Mr. Short has worked with legal counsel to implement appropriate recusals."

Watchdogs — including the former top lawyer for the Office of Government Ethics, which handles conflicts of interest issues — say that in order to comply with the law, Short needs to divest or recuse himself from issues that may impact his personal financial holdings.

There is a law that requires executive branch employees to resolve conflicts of interest before participating in any decision — or even deliberations — affecting particular companies or specific industries in which they are invested. Violations carry potential civil and criminal penalties. The law extends to the holdings of spouses and minor children.

It is unclear at this point whether Short has participated in any governmental policy decisions that could affect the companies or sectors in which he holds personal financial interests.

But recusal may be difficult because of Short's expansive list of responsibilities as the vice president's chief of staff — and in any case, there is public evidence that he is actively engaged in the Trump administration's coronavirus response efforts.

Short is a longtime political operative who has served as Pence's chief of staff since March 2019. He has also taken on a public role in the coronavirus task force operations. And on at least two recent occasions, his work has led him to mention companies in which he holds stock.

On March 18, he mentioned the vice president's trip to a 3M manufacturing plant to illustrate a point about liability protections. Records show that he holds between $65,002 and $150,000 worth of 3M stock. On March 20, he publicly hailed the work of Honeywell in producing respirator masks. According to public disclosure records, he holds between $50,001 and $100,000 worth of Honeywell stock.

The former director of the Office of Government Ethics, Walter Shaub, said he thinks an independent investigation should be launched. Since leaving the OGE in July 2017, Shaub has become a frequent critic of the Trump administration on ethics issues.

"This is now a red alarm. We have enough information to know that there is a serious possibility of a conflict of interest and a very realistic chance that he may have participated in matters affecting his financial interests," said Shaub, now with the government watchdog Citizens for Responsibility and Ethics in Washington, or CREW. "We won't know unless the FBI or the Public Integrity Section for the Justice Department do a proper investigation."

According to public disclosure forms first obtained by CREW and subsequently verified and reviewed by NPR, Short owns between $506,043 and $1.64 million worth of stock in companies that have been specifically identified or otherwise involved in the federal government's coronavirus response. Public disclosure forms do not show precise values of stock holdings, only ranges.

O'Malley, the spokesperson for the vice president's office, said that Short sought what is called a certificate of divestiture from the Office of Government Ethics. The certificate is not necessary to divest from stocks, but it does approve a tax break that allows the deferment of capital gains tax and is designed to reduce the burden of complying with federal ethics laws.

The application for a certificate of divestiture is in itself an acknowledgement that the likelihood of potential conflicts of interest exist. In order to apply for the certificate, federal employees need to attest that they have possible conflicts of interest that make it necessary to divest, according to Don Fox, a former general counsel and acting director for the Office of Government Ethics.

"There has to be an underlying conflict of interest, and OGE has to determine that there is, in order to even be eligible for a certificate," Fox said. This is done so that executive branch officials cannot take advantage of the tax deferment unless necessary for ethics purposes.

Not receiving a certificate of divestiture is not a permissible reason under the law to avoid divesting from stock. In fact, regulations require an employee requesting a certificate to commit in advance to divesting, whether or not OGE grants the request.

Short's application for a certificate of divestiture was not rejected because he was deemed to not have a conflict.

The ethics office rejected his application because some of his stocks are held in trusts that would be difficult to divest from. Some of Short's holdings were in trusts created to benefit family members, and OGE would not grant tax breaks for Short unless all potentially conflicting holdings were divested.

"OGE would not grant a certificate of divestiture covering individual equities because, after such a divestment, the stocks held in irrevocable generation-skipping trusts — established for the benefit of his children over which Mr. Short has no independent control — would remain," O'Malley said.

The Office of the Vice President did not provide a statement on why Short has not divested potentially conflicting stocks outside the trusts. Without a certificate of divestiture, Short would not qualify to defer capital gains taxes on sales of his stocks, and would be forced to pay these taxes.

Former ethics officials say that difficulty divesting does not excuse an employee from complying with the conflict of interest law.

"Ultimately, the responsibility is on the public official to take all necessary steps to make sure they're either free from potential conflicts of interest or to stay away from any issues that could conflict with those personal financial interests," said Fox.

The Office of Government Ethics declined to comment on Short's situation.

"OGE is committed to transparency and citizen oversight of government. However, OGE does not respond to questions about specific individuals," said spokesperson Patrick Shepherd.

Both of Short's predecessors as chief of staff to Pence — Nick Ayers and Joshua Pitcock — requested and obtained certificates of divestiture. Unlike Short, neither Ayers nor Pitcock appear to have held significant numbers of individual stocks during their time in that office, according to their public disclosure records. Short holds dozens of different stocks across a wide variety of sectors.

Other high-ranking officials have divested their stock holdings despite very complex financial situations. Former Secretary of State Rex Tillerson pledged before entering office to divest from 156 companies he held a financial interest in. In an ethics agreement hammered out before the start of the Trump administration, Tillerson, a former CEO of Exxon Mobil, gave up more than $4.1 million in cash bonuses as well as retiree medical and dental benefits.

Fox said that selling individual stocks is often the only way for government officials like Short to resolve potential conflicts. Recusal from possible conflicts of interest is often difficult in a position like Short's because his responsibilities as a member of the White House's senior staff would be diverse and touch on a wide range of topics and sectors.

"It's not uncommon for somebody in those positions to essentially divest themselves of all common stock... because you really can't anticipate what kinds of information or what kinds of decisions their principals — their bosses — are going to have to make," Fox said. "If you're going to be in this kind of job, you have to be able to act on anything without having to worry about conflicts of interests or recusals or workarounds."

The vice president's office would not point to any specific cases of recusal.

Short is the most senior staffer to the vice president, who has headed the coronavirus task force since late February. Short has repeatedly been involved in the White House response to the coronavirus crisis.

He answered questions from reporters about the coronavirus on Feb. 4 and March 20. In the latter instance, he cited the work of Honeywell, in which he holds between $50,001 and $100,000 of stock.

"We are actually encouraged that the partnership with private sector can meet many of these needs," he said, referring to the logistics of obtaining health care supplies. "As some of you know, Honeywell is wholly retrofitting one of their factories to produce more respirator masks."

On Fox Business on March 18, he cited 3M, a company in which he owns between $65,002 and $150,000 worth of stock. "A few weeks ago, the vice president took a trip to 3M manufacturing in Minnesota," Short said, referring to The 3M Company as one of the "primary producers" of respirator masks.

He also addressed the federal government's coronavirus response on CNBC March 20 and March 24, on Fox News March 19 and March 21, and on CNN March 25.

"There's a potential here that the vice president's chief of staff has a conflict of interest in the fact that he is working on the issues, and participating in meetings, and making presentations to the public based on things he's learned through the pandemic [response] and what's coming into the White House," Amey said.

A source familiar with Short's stock holdings said that earlier this month, the Office of Government Ethics reviewed Short's ethics program as it relates to the coronavirus task force with the vice president's legal counsel.

On May 1, the Office of Government Ethics took the unusual step of sending a memo out reminding executive branch ethics officials that stocks can pose a conflict of interest.

OGE had no comment on whether the memo was sent out in connection with any case in particular.