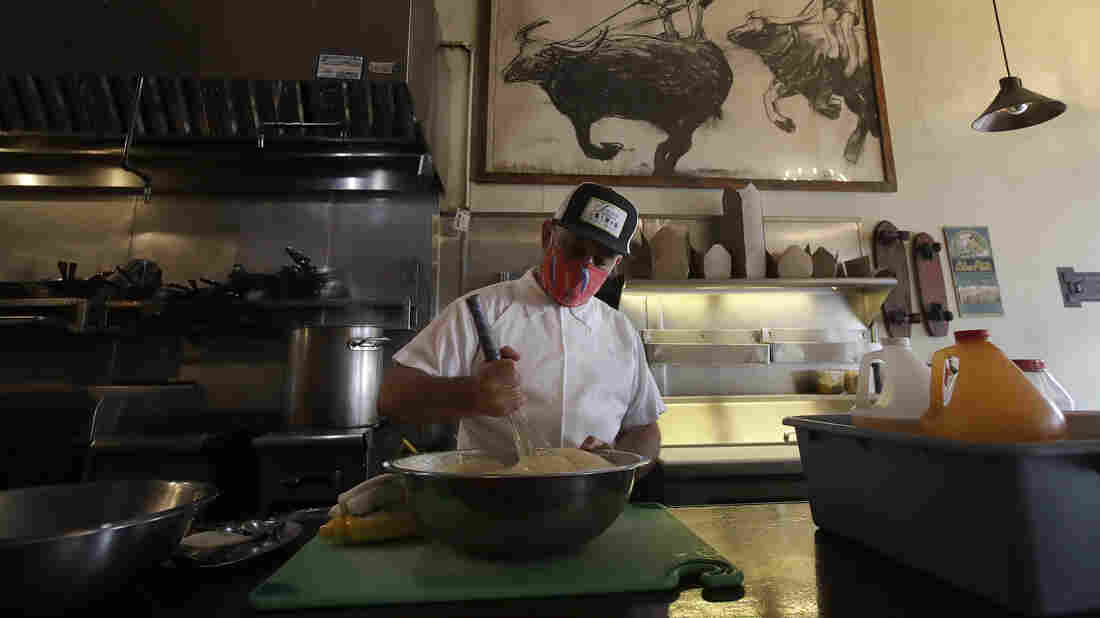 Cory Obenour, chef and co-owner of the Blue Plate restaurant in San Francisco, prepares takeout and delivery orders. The restaurant received funds from the Paycheck Protection Program, according to The Associated Press. Jeff Chiu/AP hide caption 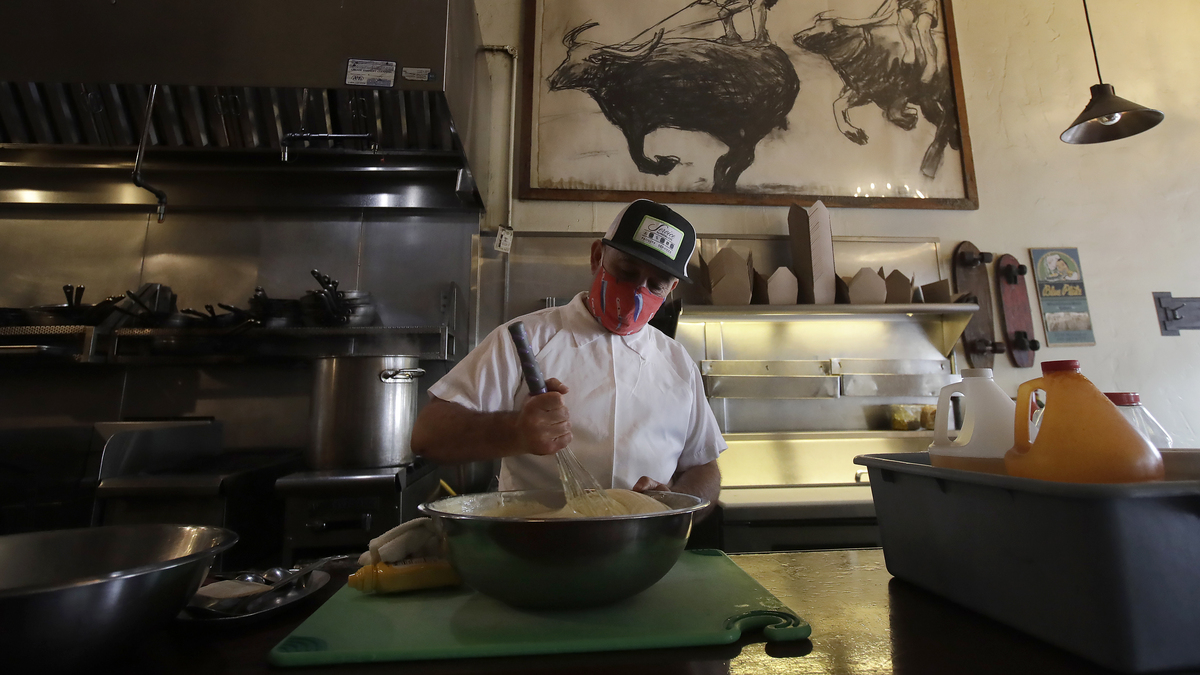 Cory Obenour, chef and co-owner of the Blue Plate restaurant in San Francisco, prepares takeout and delivery orders. The restaurant received funds from the Paycheck Protection Program, according to The Associated Press.

When the federal small business rescue program was announced, Krista Kern-Desjarlais scrambled to research it, talking to her banker and digging online.

Kern-Desjarlais runs two restaurants in Maine — the Purple House in North Yarmouth and Bresca & the Honeybee, a summer-only food stand on Sabbathday Lake. She decided to hold off on that coronavirus rescue effort, called the Paycheck Protection Program or PPP.

"Right at the last moment, I was like, 'I don't understand enough about this, so I'm not going to do it. I'm going to wait for the next round,' because I felt at that time there has to be a next round," she said. "It's going too fast. "

Over time, the Small Business Administration further clarified how the loans will work. As she learned more, Kern-Desjarlais became convinced that the PPP wasn't for her — in part because she wasn't sure when she'd be able to even bring her workers back.

"I would have pulled my people off of unemployment, paid them through the PPP as unemployment, and then put them back on unemployment. So it just seemed like an exercise in futility for my situation," she said.

In addition, she decided that taking on more debt, along with the two-year payback period, simply didn't work for her businesses.

"I think the program is great for a ton of businesses out there that are not restaurants," she said. "We don't have a lot of income, and we have almost nonexistent profit margins. The idea of holding money after [the loan], rather than having it amortized over four or five years, and then having that quick payback period, even though it wasn't a lot of money, it just felt like I'm just leaving my hole deeper."

There was a mad dash for the first round of PPP money, which was $349 billion and was gone in 13 days. This second round, $310 billion, is going much more slowly and still has more than $140 billion left one month later.

Business owners who wanted the money have, in large part, received it. Others, like Kern-Desjarlais, have decided it's just not for them.

Most businesses who wanted the money have gotten it

Data from the Census Bureau show that PPP funding is finally catching up to demand.

The bureau's Small Business Pulse survey has three weeks of data, starting on April 26 — the week the second round of PPP money opened. Over all three weeks, demand for PPP money didn't rise. Each week, about 75% of businesses said they had requested PPP money since the program opened.

But the share of businesses who had received the money rose steadily, from 38% in the first week to nearly 67% in the third week. So while there are still some businesses waiting on funds, it appears that the overwhelming majority that wanted PPP money have gotten it. 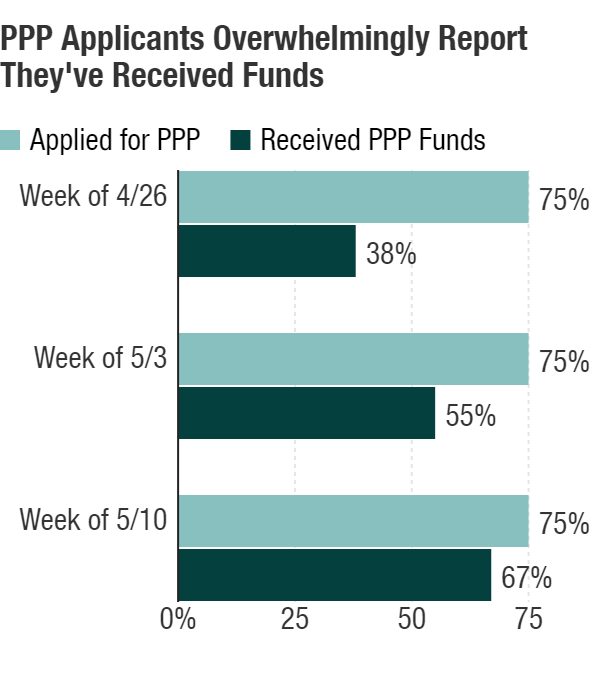 Beyond that, demand does not appear to be growing.

"I think the story that this kind of leads to is that small businesses were really on the ball and applying for this program early on, recognizing that it was first come, first served," said Curtis Long, chief economist at the National Association of Federally-Insured Credit Unions.

There was a crush of applications when the program opened on April 3. But many factors — including continually shifting guidance, changing forms, technical difficulties, and many banks only opening up the process to their existing customers — slowed down the lending process and prevented some businesses from receiving the money.

To Long, the data show that those issues have improved.

"I think the delays that we've seen in funding have just been sort of those bottlenecks, you know, working through those," he said. "It seems like most of those issues have been resolved now."

For one thing, some of the very smallest businesses were not allowed to get into the program until later. While the PPP's first round opened on April 3, independent contractors and freelancers weren't allowed to apply until April 10.

Minority-Owned Small Businesses Were Supposed To Get Priority. They May Not Have

"By then, there was a huge queue for the portal [where lenders submit PPP applications]," Long said. "So, you know, for that class of borrower, they may have just gotten pushed to Round 2."

Funding for the first round ran out on April 16, just six days after those one-person businesses were first allowed to apply.

But beyond that, banks may have prioritized their biggest customers. Lawsuits in New York and California have alleged that big banks pushed larger businesses to the front of the PPP line. In addition, The New York Times has reported that JPMorgan Chase gave some of its bigger business clients special treatment in applying for the PPP.

Some others have been scared off by uncertainty in the program's rules.

The PPP application form asks applicants to certify that "current economic uncertainty makes this loan request necessary" for the business to keep operating. Accountant Scott Levine, of Atlanta's Intown Financial Services, says that while many of his applicants are hurting financially, they are nervous about whether they meet that requirement. In addition, he says, some clients' banks warned them strenuously about the dangers of misrepresenting their financial situations.

"That scared a lot of my clients, even the ones that were ideally suited to get the loan. They're now scared," he said. "And then there are a couple of articles about people going to jail for fraud, which shouldn't scare them. But it does."

This fear is despite the fact that the SBA has clarified that borrowers receiving loans of under $2 million will automatically be deemed to have received the money "in good faith."

In addition, uncertainty around exactly how forgiveness will work has led some of Levine's clients to be less enthusiastic about the program.

"I tell them, 'You're a poster child for this program. Spend the money,' " he said. "But then I have to tell them, 'I can't guarantee it's gonna be forgiven either.' "