Accessibility links
Rifts Over Hong Kong And The Pandemic Heat Up U.S.-China Tensions Relations between the economic giants have gone downhill fast since they signed a preliminary trade pact four months ago. The latest tussles over the coronavirus and Hong Kong add to the friction. 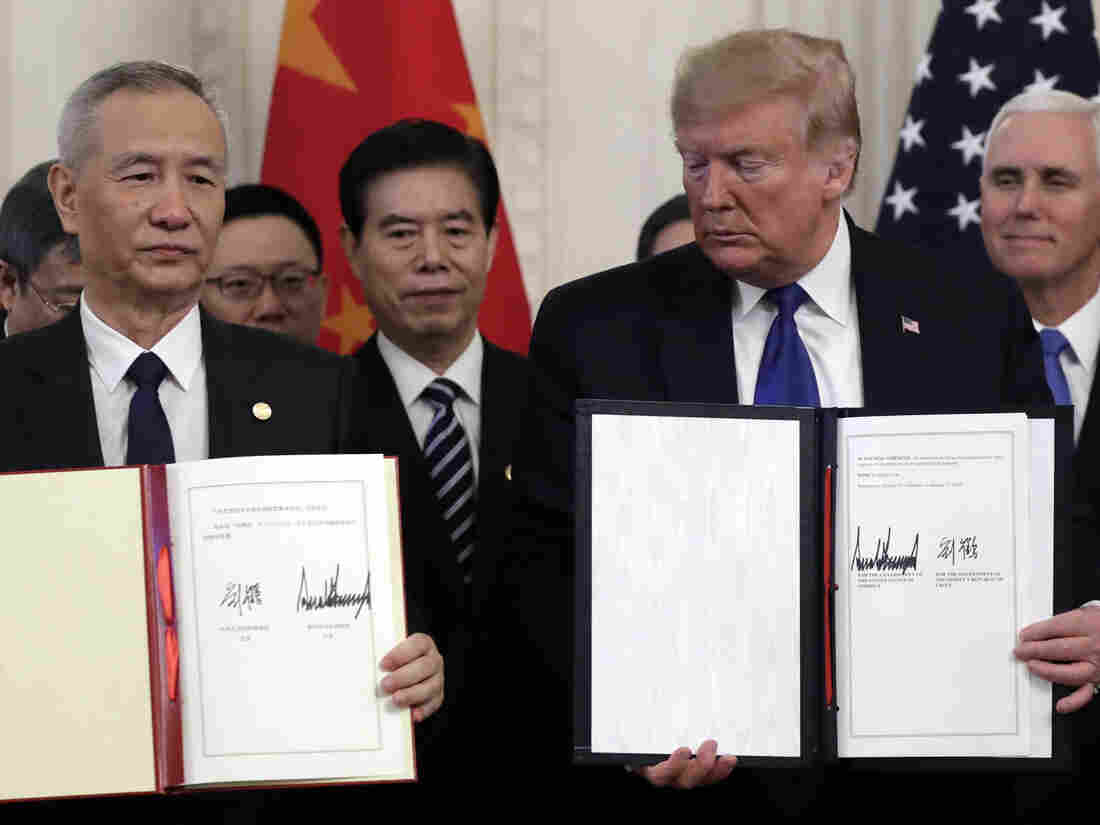 President Trump and Chinese Vice Premier Liu He signed a preliminary trade agreement at the White House on Jan. 15. Since then, tensions between the two countries have grown. Evan Vucci/AP hide caption 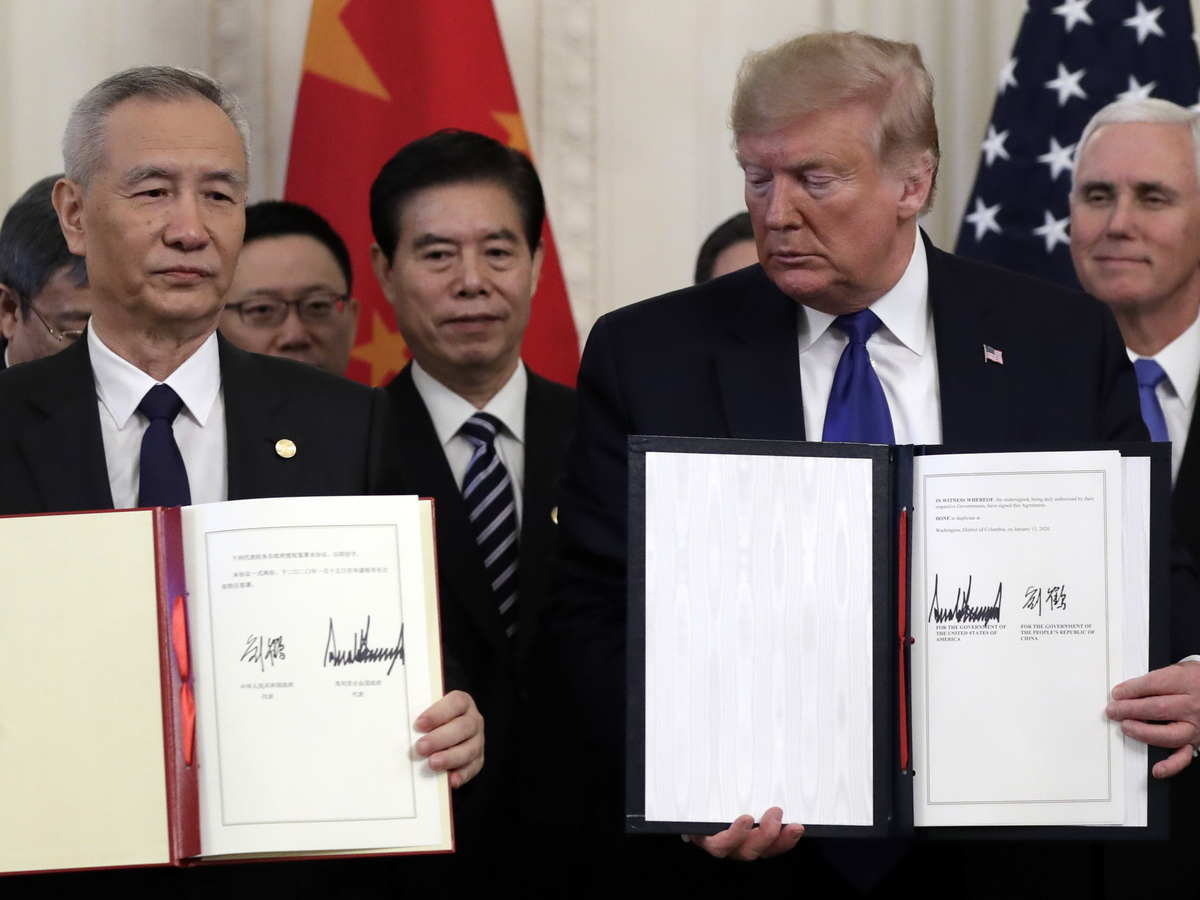 President Trump and Chinese Vice Premier Liu He signed a preliminary trade agreement at the White House on Jan. 15. Since then, tensions between the two countries have grown.

President Trump is warning of possible sanctions this week against China over its treatment of Hong Kong. It's the latest source of friction in what's become an increasingly tense relationship between the world's two biggest economies.

Things have gone downhill fast in the four months since the two countries signed a preliminary trade deal in which China promised to buy hundreds of billions of dollars' worth of additional American goods.

"We're delighted that the Chinese consumers will now enjoy the greater access to the best products on Earth — those made, grown and raised right here in the USA," Trump said in January.

'No Reasonable Person Can Assert' Hong Kong Has Autonomy From China, Pompeo Says

Hog farmers were among those who saw a big market. China has lost much of its own pork production to an outbreak of African swine fever.

"What that's done is created a tremendous opportunity for the pork industry around the world," said Maria Zieba, director of international affairs for the National Pork Producers Council. "Unfortunately, when the Chinese have the chance to buy pork, they're going to go where the price is lowest."

Despite the trade deal, American pork still faces an extra 25% tariff in China compared to its global competitors. While pork exports have increased this year, Zieba says they still fall well short of their potential.

Exports of farm goods, factory products and crude oil are all running far behind what was promised in the trade deal, according to a tally from the Peterson Institute for International Economics.

How The Coronavirus Has Strained U.K.-China Ties

Economist Mary Lovely of Syracuse University says those targets were always going to be a stretch. And the coronavirus pandemic has made things worse.

"The world has changed," Lovely says. "And clearly, China's purchases are going to be affected. One, because their demand collapsed; secondly, because American supply collapsed. So you had sort of a double whammy on their reaching these purchase targets."

Last week, Foreign Policy magazine ran a story headlined, "Trump's China Trade Deal Is as Dead as Can Be." White House economic adviser Larry Kudlow insists the deal is still alive, but not as important to the president as it once was.

Trump has been harshly critical of China over its handling of the pandemic. China was slow to acknowledge that the coronavirus can spread from person to person. Still, China appears to have been much more successful than the United States at controlling the outbreak.

Yun Sun, who directs the China program at the Stimson Center, says Beijing reads Trump's criticism as an effort to deflect from his own government's missteps.

"I think the Chinese reaction is, 'Wait a minute. Maybe we are responsible for part of it. But for you to blame everything on us, that's not fair,' " Sun says.

Historically, China has been cautious about flexing its muscle in Hong Kong or making other aggressive moves because it wanted to maintain a working relationship with the U.S. But with both countries now throwing sharp elbows, the brakes are coming off.

"In my view, the pandemic is really just an accelerant of the downward spiral in the relationship, which now appears to me to be almost in free-fall," said Bonnie Glaser, who directs the China Power Project at the Center for Strategic and International Studies. "I don't know where the bottom is but I feel like we haven't reached it yet."

The Trump administration has been ratcheting up its restrictions on exports of sensitive technology to China. And its calls for reduced dependence on China for critical goods such as medical supplies are growing louder.

Glaser warns that there's so much anti-China sentiment in the U.S., the relationship may suffer even if there's a new president in the White House next year.

"Both [presumptive Democratic presidential nominee Joe] Biden and Trump are trying to position themselves as being the toughest on China. And nobody is talking about what in this U.S.-China relationship needs to be preserved," Glaser says.

That's ominous for the kind of cooperation between the two countries the world needs to tackle challenges like climate change and the pandemic.