Accessibility links
Telemedicine Abortion Is Heavily Regulated Nationwide And Banned In 18 States. As more healthcare moves to online and telemedicine, some patients seeking abortions using pills are running into obstacles. 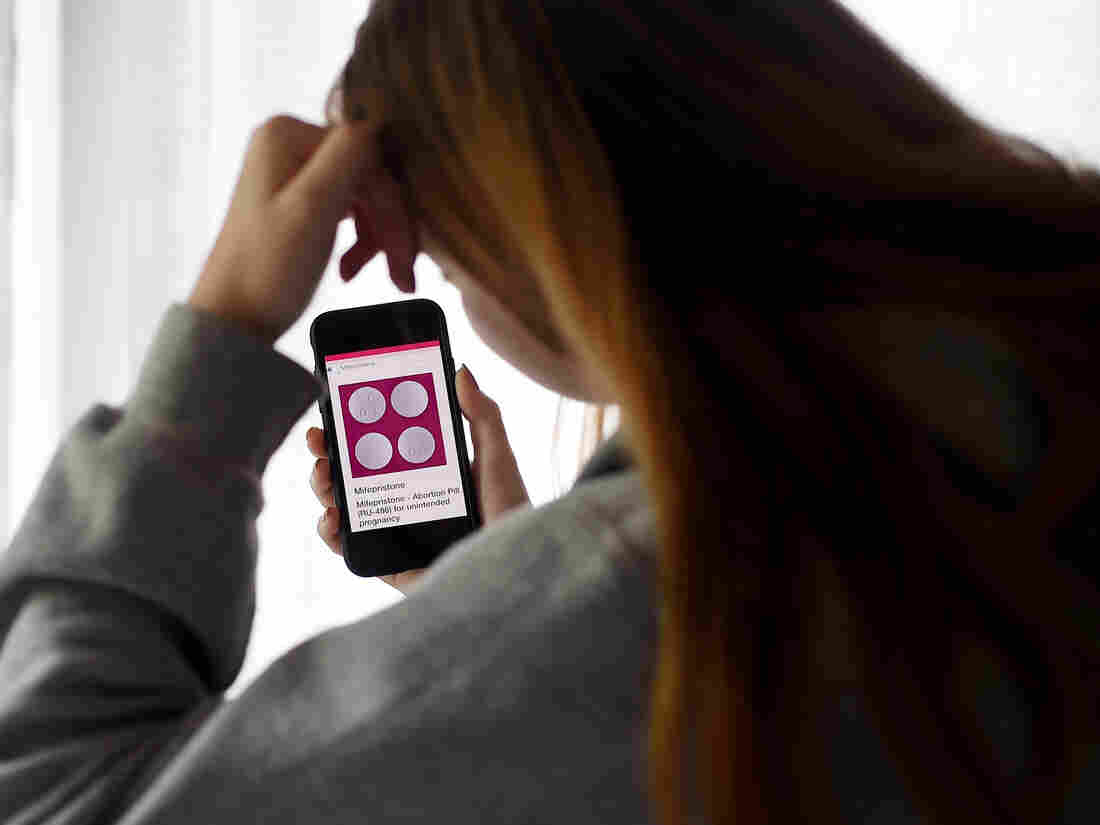 In this photo illustration, a person looks at an abortion pill (RU-486) for unintended pregnancy from Mifepristone displayed on a smartphone on May 8, 2020, in Arlington, Va. Under federal law, even in states where telemedicine abortion is legal, there are strict rules surrounding how the pill is dispensed. Olivier Douliery/AFP via Getty Images hide caption 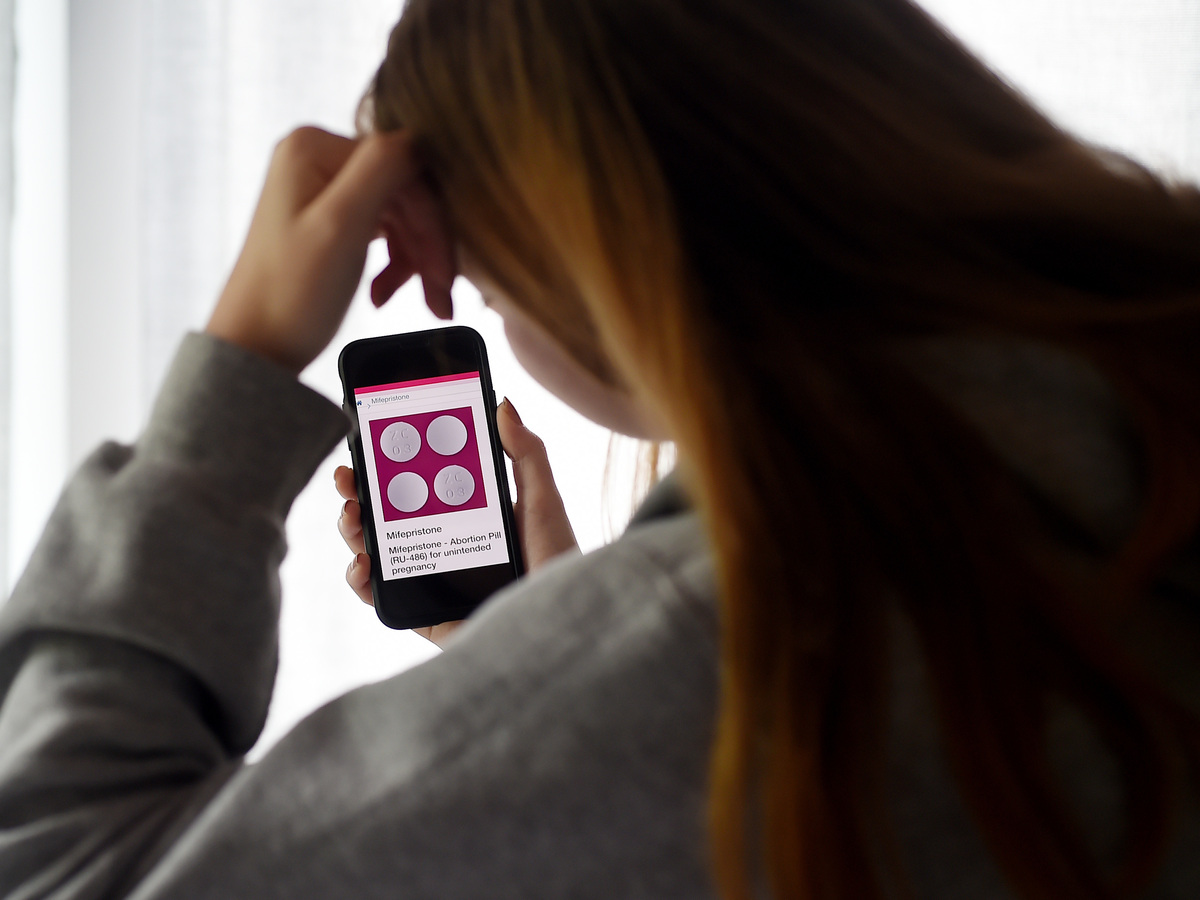 In this photo illustration, a person looks at an abortion pill (RU-486) for unintended pregnancy from Mifepristone displayed on a smartphone on May 8, 2020, in Arlington, Va. Under federal law, even in states where telemedicine abortion is legal, there are strict rules surrounding how the pill is dispensed.

Even before the coronavirus crisis, there were lots of abortion restrictions in South Dakota. But now the procedure has become unavailable, officials say.

"I called to make the appointment and they said the Sioux Falls location was closed [for abortions] because of the coronavirus," said 34-year-old Heather. NPR agreed not to use her last name because she doesn't want people in her largely conservative community to know about her abortion.

During the coronavirus pandemic, more healthcare is moving online — including abortion. In many states, abortion pills can be prescribed remotely, and abortion providers are reporting a growing number of women seeking medication abortions through telemedicine. But others are finding obstacles in their way.

Heather lives in Sioux Falls, S.D., and has two small children. One of her kids is being treated for a rare form of cancer and Heather said she and her partner felt they couldn't handle another pregnancy now.

"Somebody can only take so much, I guess," she said.

Between layers of restrictions on abortion, and a lot of social stigma, Planned Parenthood officials say they've been unable to find a South Dakota-based doctor to perform abortions. So for 25 years, the organization has been flying physicians in and out, several times a month, to provide the procedure at the state's only abortion clinic in Sioux Falls.

"It's been very difficult for women to access abortion since COVID-19 because of course we can't fly doctors to South Dakota anymore," she said.

Stoesz oversees clinics in several Midwestern states. Her region has seen a 250% increase in the use of telehealth for all types of care since social distancing restrictions took effect. In Iowa, where telemedicine abortion is legal, the organization reports a 33% increase over about a month.

But abortion through telemedicine is not legal in South Dakota.

"That means that there is no abortion access in South Dakota right now," Stoesz said.

According to the Guttmacher Institute, which supports abortion rights, 18 states prohibit doctors from prescribing abortion pills remotely. In places where the practice is legal, doctors say they're hearing from more patients seeking abortions this way.

"I think what they're seeing is that most of their health care has moved to an online or a tele-platform," said Dr. Colleen McNicholas, an abortion provider in Illinois, Kansas, Missouri and Oklahoma. "So we are constantly getting folks asking questions about that. And unfortunately, in most of the places that I work in the Midwest, that's just not an option."

In New York, a state with more liberal abortion laws, Dr. Meera Shah is chief medical officer at Planned Parenthood Hudson Peconic, outside New York City. Shah said she has stepped up the use of telehealth for all types of reproductive health care, including abortion for patients in the early stages of pregnancy.

"I had a patient the other day who is an emergency responder who was sitting in her ambulance and accessed abortion care via telemedicine and then drove her ambulance to our health center to pick up the meds," Shah said. "And she was so grateful that she was able to do that and only take, you know, max 15 minutes away from her work."

Under federal law, even in states where telemedicine abortion is legal, there are strict regulations surrounding how mifepristone is dispensed.

Reproductive rights advocates want policy makers to ease restrictions on the drug – especially during the pandemic. They point to the United Kingdom, where regulators have eased rules for medication abortions in response to the coronavirus crisis. The American College of Obstetricians and Gynecologists has sued the federal government, asking that rules requiring patients to pick up the abortion pill mifepristone at a medical facility be suspended.

But Dr. Christina Francis, with the anti-abortion rights group the American Association of Pro-Life Obstetricians and Gynecologists, supports strict controls on abortion pills. She opposes abortion, but said if a woman is going to have a medication abortion, she should see a doctor first to confirm how far along the pregnancy is and check for other complications.

"I will tell you as a woman, and as a physician who sees women: I love women; I think we are intelligent. But we are notoriously bad about knowing our last period and being able to date pregnancies that way," Francis said.

Abortion rights advocates point to research suggesting patients receiving abortion pills through telemedicine have similar outcomes to other types of abortion, and the fact that groups including ACOG say the safety of medication abortion is well-established.

For Heather, South Dakota's restrictions on telemedicine abortion meant taking a different type of risk: driving to a clinic in Omaha, Neb., about three hours each way, where she was prescribed abortion pills to take home. Several weeks ago, she and her partner packed cleaning supplies and loaded up the kids — even though she knew it could be dangerous during a pandemic.

"I just didn't want them touching anything," she said.

Heather isn't alone; officials at Planned Parenthood say more than 60 patients from South Dakota have traveled to clinics outside the state for abortions since the pandemic began.

"It was something that I needed to do," Heather said. "And I was gonna have it done, whatever lengths I had to go to, whatever obstacles they put in front of me."