Accessibility links
Coronavirus Testing Machines Are Latest Bottleneck In Troubled Supply Chain Civilian labs and the Army say they've had trouble getting big machines that run hundreds of coronavirus tests at once. Public health experts say that's holding the U.S. back from ramping up testing. 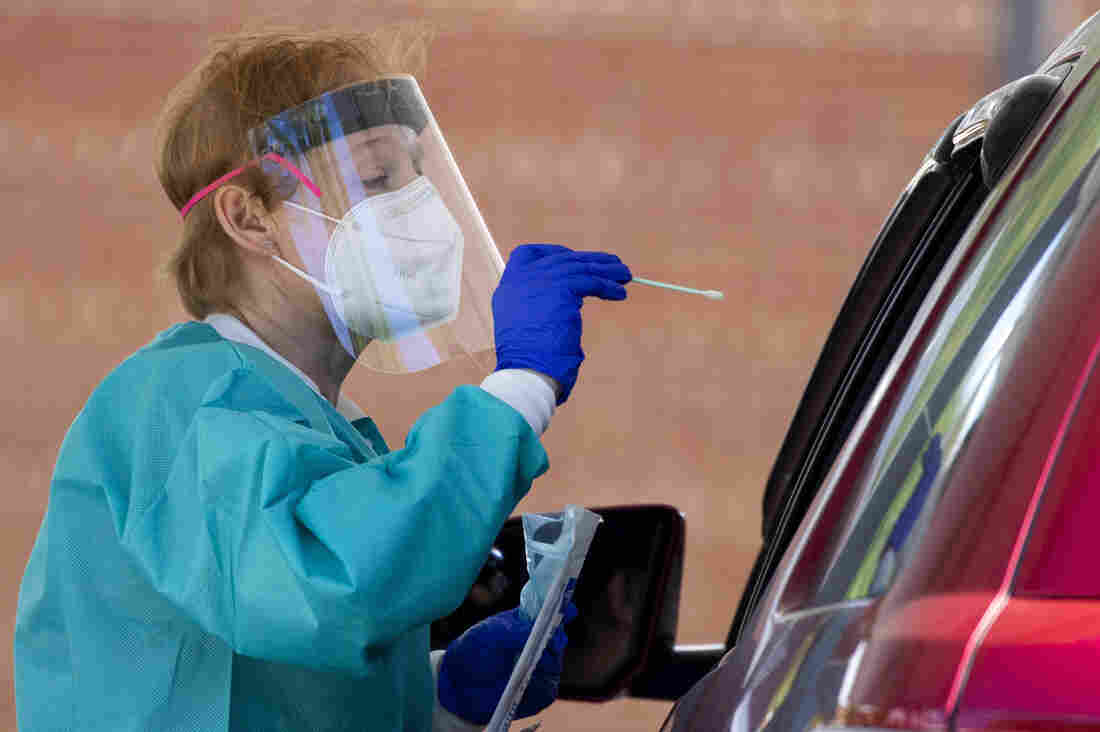 Medical personnel test people in vehicles for COVID-19, at Annandale High School, in Annandale, Va., on May 23. There's a new bottleneck emerging in coronavirus testing: A shortage of the machines that process the tests and give results. Jacquelyn Martin/AP hide caption 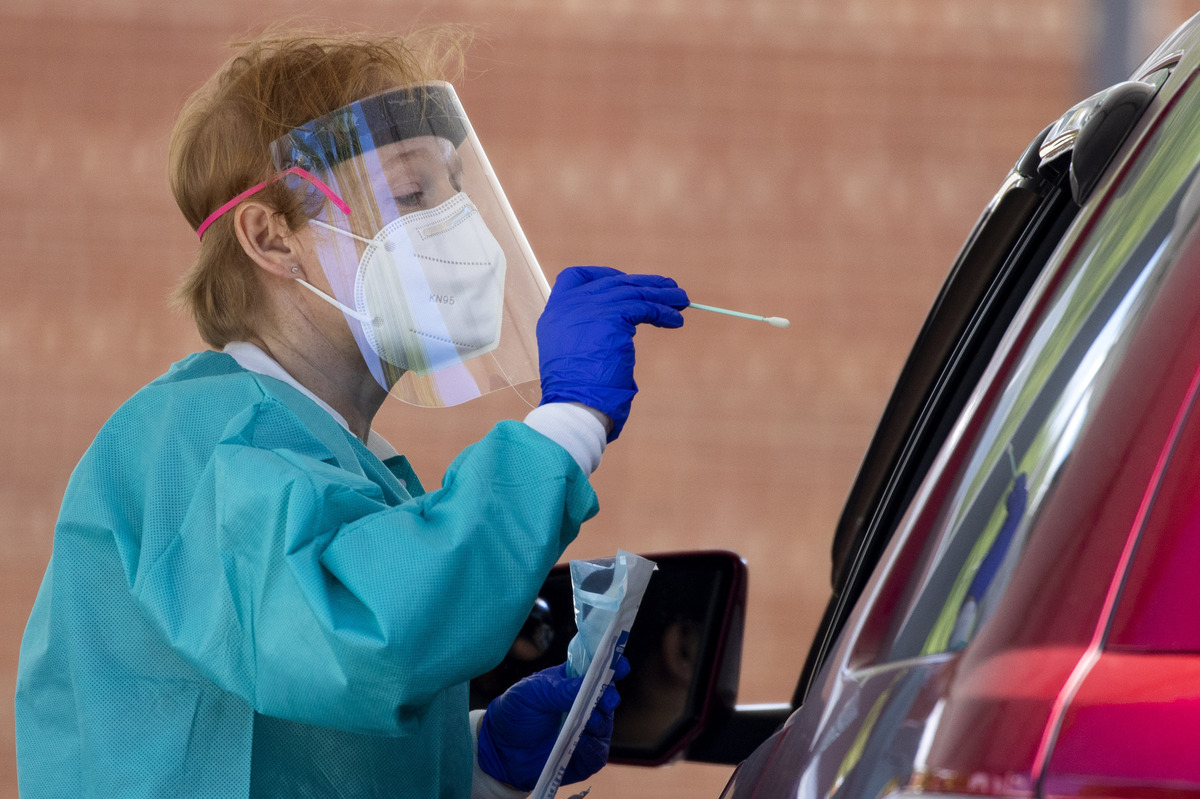 Medical personnel test people in vehicles for COVID-19, at Annandale High School, in Annandale, Va., on May 23. There's a new bottleneck emerging in coronavirus testing: A shortage of the machines that process the tests and give results.

Coronavirus testing in the U.S. has run into a number of snags, from a lack of nasal swabs to not enough chemicals needed to run the tests.

Now there's a new bottleneck emerging: A shortage of the machines that process the tests and give results.

Civilian labs and the Pentagon say they've had trouble getting the sophisticated, automated machines that can run hundreds of diagnostic tests at once. Three machine manufacturers — Hologic Inc., Roche and Abbott Laboratories — have confirmed to NPR that demand is outstripping supply.

Public health experts say the machine shortages are upending a complicated supply chain just as the shortages of swabs, chemicals and other testing materials have begun to ease.

In Large Texas Cities, Access To Coronavirus Testing May Depend On Where You Live

Experts warn the lack of machines will hold the U.S. back from ramping up diagnostic testing to better understand where the coronavirus is spreading and how to stop outbreaks.

"We're gonna get stuck again," said Ashish Jha, director of the Harvard Global Health Institute. "We keep sort of fixing one bottleneck, and testing gets a bit better, and then we get stuck with the next bottleneck."

The Trump administration has released a plan to ramp up testing, saying it would provide strategic direction and technical assistance, but mostly leaving responsibility for executing the plan to the states. Coronavirus testing in the U.S. is carried out by a patchwork of commercial labs, hospitals, local health departments and other institutions.

"Right now in America anybody who needs a test can get a test in America with the numbers we have. ... That's over three million tests per week," Giroir said at a White House briefing earlier this month. 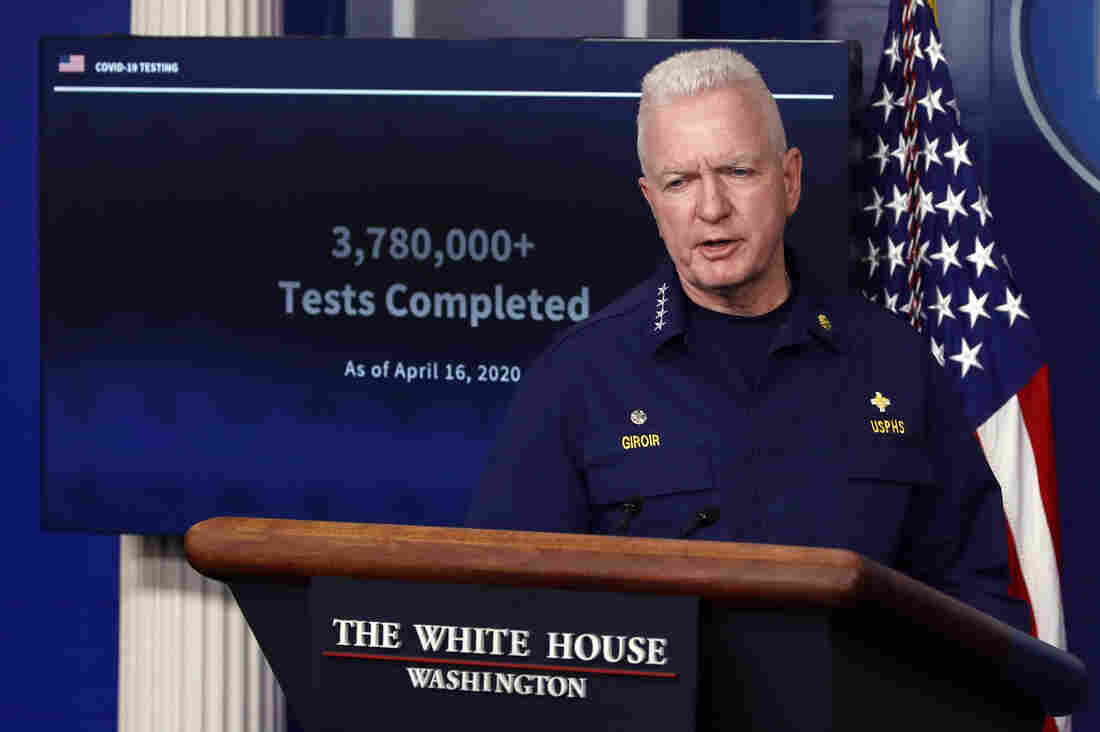 Adm. Brett Giroir, assistant secretary of Health and Human Services, speaks about the coronavirus in the James Brady Press Briefing Room of the White House on April 17. The Trump administration has released a plan to ramp up testing and Giroir says that plan is working. Alex Brandon/AP hide caption 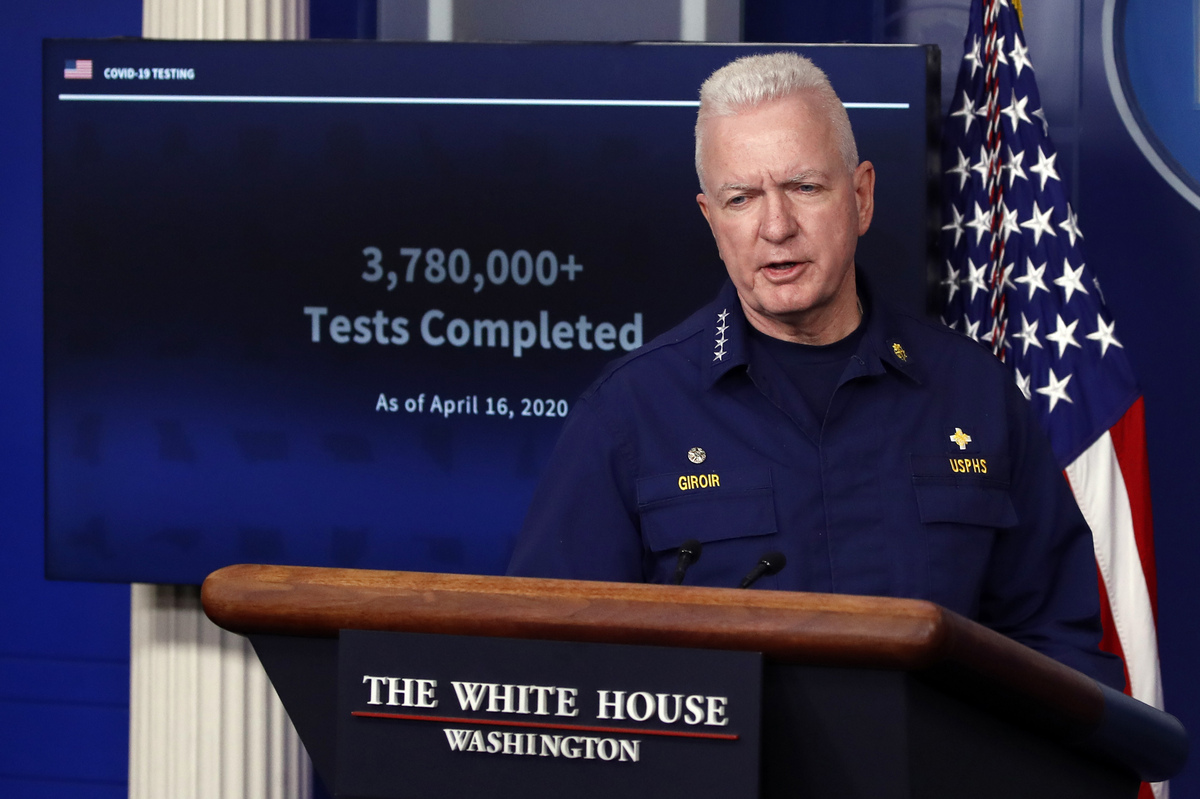 Adm. Brett Giroir, assistant secretary of Health and Human Services, speaks about the coronavirus in the James Brady Press Briefing Room of the White House on April 17. The Trump administration has released a plan to ramp up testing and Giroir says that plan is working.

Jha and other public health experts say that may be enough tests in some places — but only because not enough people are getting tested.

"It is not nearly enough, certainly not enough to open up safely and remain open," Jha said.

At a minimum, Jha says the U.S. needs to be testing twice as many people — 7 million per week. That means the country is going to need more swabs, more testing kits, and more testing machines to run them. Four months into the pandemic, Jha says, the nation still isn't ready.

Heather Pierce, senior director for science policy for the Association of American Medical Colleges, says labs at teaching hospitals have reported difficulties in getting testing machines. She says that has exacerbated supply chain problems.

"Those machines have been part of the bottleneck," she said. "In fact, even institutions that had ordered those machines prior to the pandemic found their orders were cancelled or delayed, and some still haven't been shipped."

Even the U.S. Army is finding it can't get some coveted testing instruments.

The Chief of Staff of the Army, Gen. James McConville, told NPR the Army has been unable to secure more of the machines that can handle a greater volume of tests.

More testing is needed to get back to training large numbers of troops. McConville toured the Fort Irwin National Training Center in California earlier this month, where he questioned the base staff about their capacity to test for the coronavirus.

The soldiers told him they want a machine known as the Panther, a top-of-the-line, automated testing instrument made by the pharmaceutical company Hologic. It can run more than 1,100 tests a day.

General McConville called it the "granddaddy" of testing machines.

But McConville said there aren't enough of them on the market. He told the soldiers: "Realistically, you won't get Panther."

Three manufacturers confirmed they have not been able to meet the demand for new testing machines. One of them was Hologic, the company that makes the Panther.

"Given the unprecedented demand, we cannot provide new instruments to every lab that wants one, at least not right away," Mike Watts, Hologic's vice president of investor relations and corporate communications said in an email.

Watts stressed that there are already more than 1,000 Panther machines, which are used for other medical tests as well, installed in labs in all 50 states.

"So overall, we believe availability of Panthers is accelerating, not constraining, national testing," Watts said.

Roche and Abbott Laboratories say they've also had trouble filling orders for some big instruments. All three companies say they're doing everything they can to scale up production.

Roche spokesman Mike Weist said the company is even shipping out demonstration and training models. "Every available instrument, including instruments repurposed from internal use (such as training, demonstration, clinical trials), has been shipped or allocated for shipment in order to increase testing capacity worldwide," Weist said in an email.

"This is a classic market failure," Jha said. "This is not something that the market is going to sort out onto itself."

It's not just about ramping up production of these machines, Jha says. To get testing to more than double where it is today, he says labs need to invest even more in a lot more equipment.

But the testing machines are expensive. And the pandemic has caused an economic meltdown. Now some labs are saying they're not sure they can justify the expense of adding more instruments.

What if infection rates decline? What if people don't come forward to get tested, or think they don't need to unless they're really sick? That is, after all, what many public health officials were saying for months when tests were scarce.

"This is a place where I think the government just needs to step in and pay companies — buy the machines for companies, or pay large amounts for these tests," Jha said. "This is what many of us have been asking for from the federal government. ... And it's very frustrating."

He's not the only one who is looking to the federal government to play a bigger role.

"There has been something of a disconnect, however, between the need for testing and providing the necessary support and resources for laboratories to grow and expand that testing," Khani said.

Khani's organization wrote to the Trump administration in April, asking for $10 billion in emergency relief funds to buy more testing machines for their labs. The group is still waiting for a response.