Accessibility links
National Guard To Help Quell Unrest Over George Floyd's Death Prosecutors say a probe of the black man's death while in police custody is underway and federal charges are possible. Violent protests erupted for a third night. 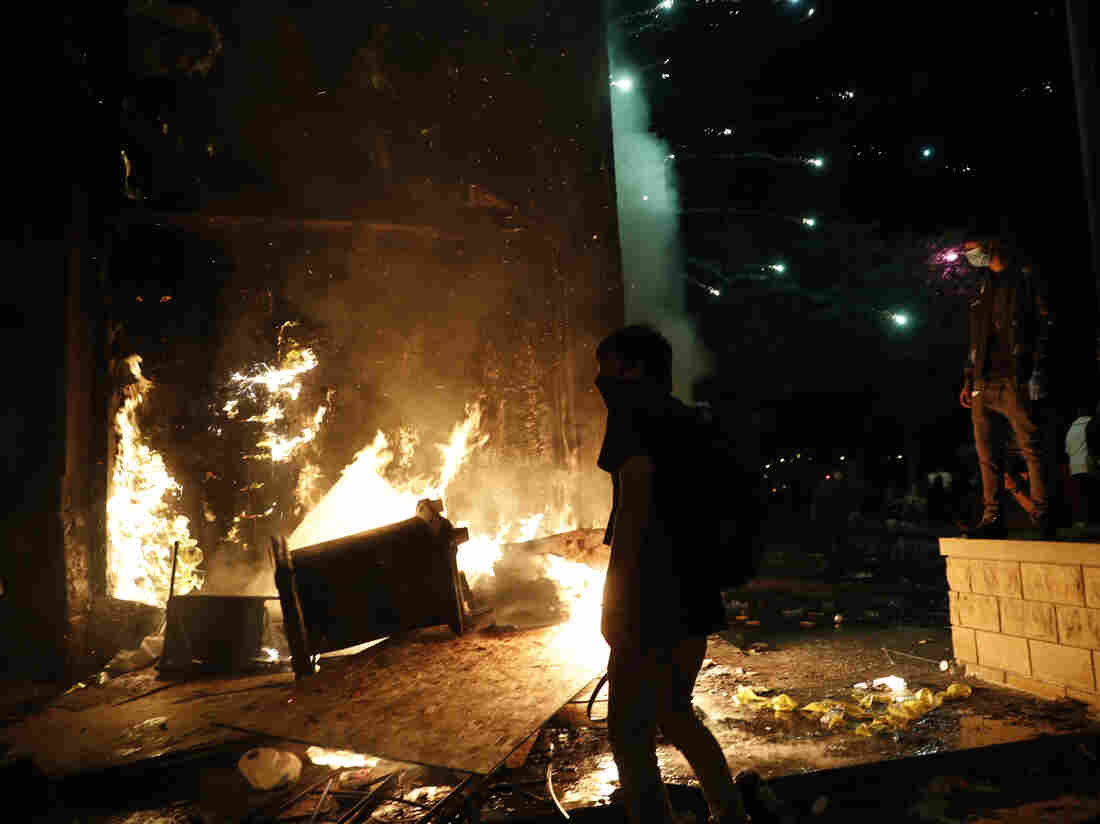 Protesters set fires at the 3rd Precinct of the Minneapolis Police Department on Thursday. Protests over the death of George Floyd, the black man who died in police custody, continued in Minneapolis for a third straight night. John Minchillo/AP hide caption 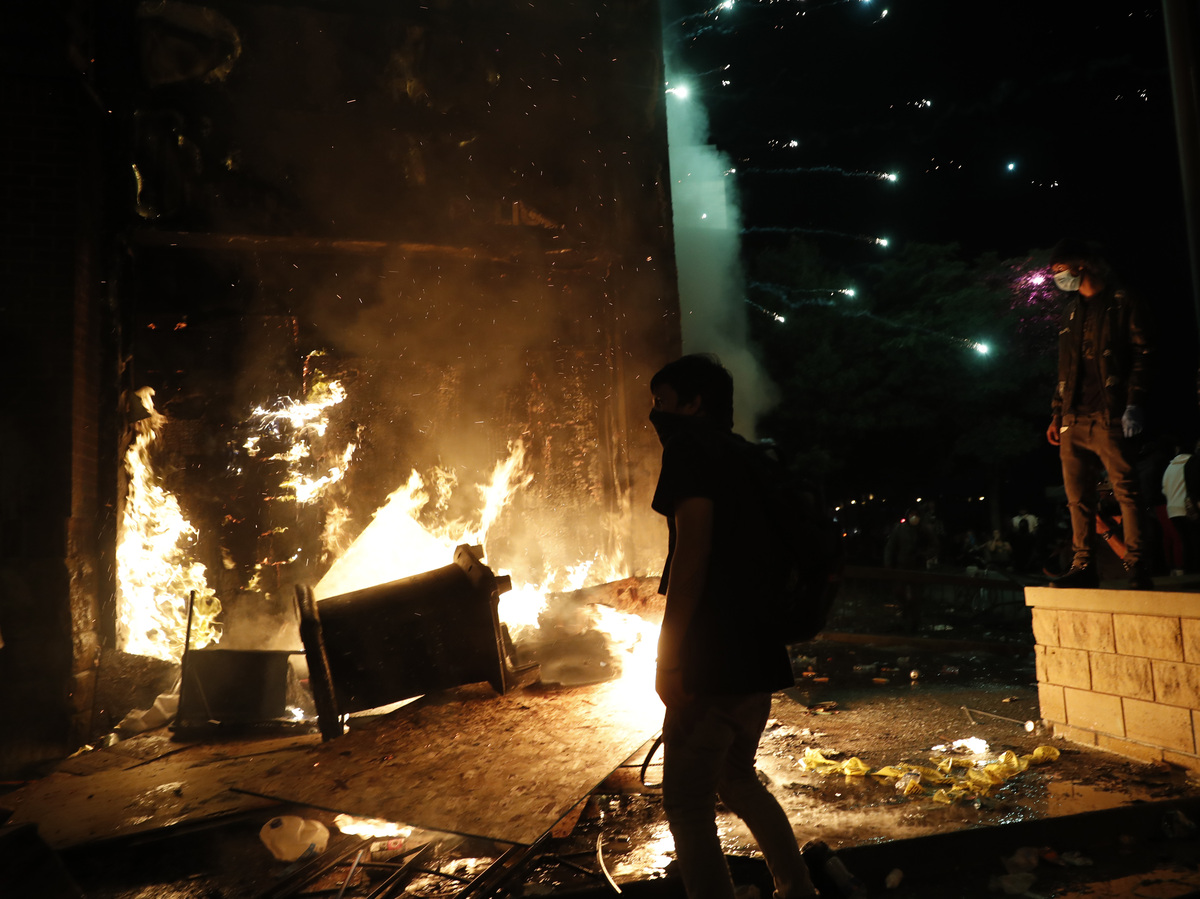 Protesters set fires at the 3rd Precinct of the Minneapolis Police Department on Thursday. Protests over the death of George Floyd, the black man who died in police custody, continued in Minneapolis for a third straight night.

Fire ravaged the 3rd Precinct police building in Minneapolis on Thursday night as thousands of people jammed downtown streets on the third night of furious protests over the death of a black man after an encounter with police. A police spokesman said personnel at the precinct were safe.

Gov. Tim Walz on Thursday signed an executive order activating the Minnesota National Guard to help restore peace following days of furor over a video showing a white police officer holding his knee on the neck of George Floyd, who later died.

"We're hearing unconfirmed reports that gas lines to the Third Precinct have been cut and other explosive materials are in the building," the city tweeted. "If you are near the building, for your safety, PLEASE RETREAT in the event the building explodes."

President Trump responded early Friday, calling the demonstrators "THUGS" in a tweet. Trump said he had spoken to Walz, saying the military would support him "all the way" and suggesting more violence would take place if protests continued.

In the same thread, Trump criticized "a total lack of leadership" from Minneapolis Mayor Jacob Frey. Frey said in an early morning press conference that it was his decision to order police to leave the 3rd Precinct building before protesters arrived and set fires.

"Donald Trump knows nothing about the strength of Minneapolis," Frey said, responding to the president's tweets. "We are strong as hell."

"Is this a difficult time period? Yes, but you better be damn sure we're going to get through this," Frey added.

Twitter later flagged Trump's tweet for violating its terms of service for "glorifying violence." The action from Twitter comes after the president signed an executive order Thursday aimed at limiting the broad legal protections enjoyed by social media companies, two days after Twitter fact-checked two of his tweets.

The National Guard confirmed it is deploying more than 500 soldiers to the Twin Cities and surrounding areas, and "a key objective is to ensure fire departments are able to respond to calls."

Local leaders had urged Walz to deploy the National Guard after some peaceful protests in which demonstrators called for charges against four officers involved in the George Floyd case. They evolved into attacks on first responders, law enforcement and private businesses especially during Tuesday, Wednesday and Thursday nights.

Demonstrations in Louisville, Ky., also escalated Thursday night as protesters turned out to demand justice for Breonna Taylor, a black woman fatally shot by police in her home in March. Seven people were shot, leaving at least one in critical condition, according to the Louisville Metro Police Department.

LMPD spokesperson Alicia Smiley said police made some arrests, but she couldn't say how many as "the situation is ongoing." LMPD spokesperson Jessie Halladay said in an email that no officers fired their weapons.

George Floyd "would not want people to get hurt"

"It is time to rebuild. Rebuild the city, rebuild our justice system, and rebuild the relationship between law enforcement and those they're charged to protect," Walz said in a statement on Thursday.

"George Floyd's death should lead to justice and systemic change, not more death and destruction."

He also invoked, the dead man's wish that he "would not want people to get hurt."

Minutes after the governor's announcement, local and federal officials said the investigation is ongoing and neither the FBI nor the Department of Justice is ready to press charges against any of the officers involved.

Hennepin County Attorney Michael Freeman described the video as "graphic and horrific and terrible" during a news conference but said that it is not enough to prove criminal wrongdoing.

"There is other evidence that does not support a criminal charge," he said, without elaborating on what that was.

Freeman repeatedly stated that the investigation would not be rushed.

"A top priority" for the Justice Department

Earlier in the day, the Justice Department announced it has made the investigation into George Floyd's death "a top priority."

Demonstrators gathered in Minneapolis, where Floyd died, and as far afield as Los Angeles and Denver.

"The federal investigation will determine whether the actions by the involved former Minneapolis Police Department officers violated federal law," U.S. Attorney for the District of Minnesota Erica MacDonald and Rainer Drolshagen, the FBI special agent in charge of the Minneapolis field office, said in a joint statement Thursday. "It is a violation of federal law for an individual acting under color of law to willfully deprive another person of any right protected by the Constitution or laws of the United States."

They said the "robust criminal investigation" is being spearheaded by the department's Civil Rights Division and the local FBI field office.

"Upon conclusion of the FBI's investigation," they added, "the U.S. Attorney's Office will determine whether federal criminal charges are supported by the evidence. If it is determined that there has been a violation of federal law, criminal charges will be sought."

Officers fired but no charges filed

The Minneapolis Police Department swiftly fired the four police officers shown in the disturbing video, in which the arresting officer appears to shove Floyd's face into the pavement with his knee for at least seven minutes on Monday evening. Several minutes into the video, Floyd's pleas for help go quiet. Medical workers lift his unresponsive body into an ambulance. Floyd was reported dead later that night.

The decision to fire the officers — who have not been officially identified — has satisfied neither Frey, who called Wednesday for prosecutors to press charges, nor Floyd's family members, who specifically want the officers charged with murder.

Autozone on Lake Street has caught fire. It was looted earlier in evening @MPRnews pic.twitter.com/L77DlBMmAd

It also hasn't satisfied protesters in Minneapolis, where throngs of people turned out for demonstrations outside the 3rd Precinct beginning on Tuesday. Protests in the daytime were peaceful, thronged with masked chanting activists — though Minnesota Public Radio reported that tensions eventually escalated, with police using tear gas and some people tossing rocks, setting fires and looting nearby businesses.

"There's an industrial building across the street from me that's smoking," MPR News' Jon Collins reported from the scene early Thursday. "There's affordable housing that was being built that is still on fire ... there is a Wendy's that is completely demolished in the parking lot. Target has been looted. Cub has been looted ... and blockades everywhere."

Fires reportedly could be spotted for miles outside the city. Local police also confirmed that they are investigating a shooting death during the melee. 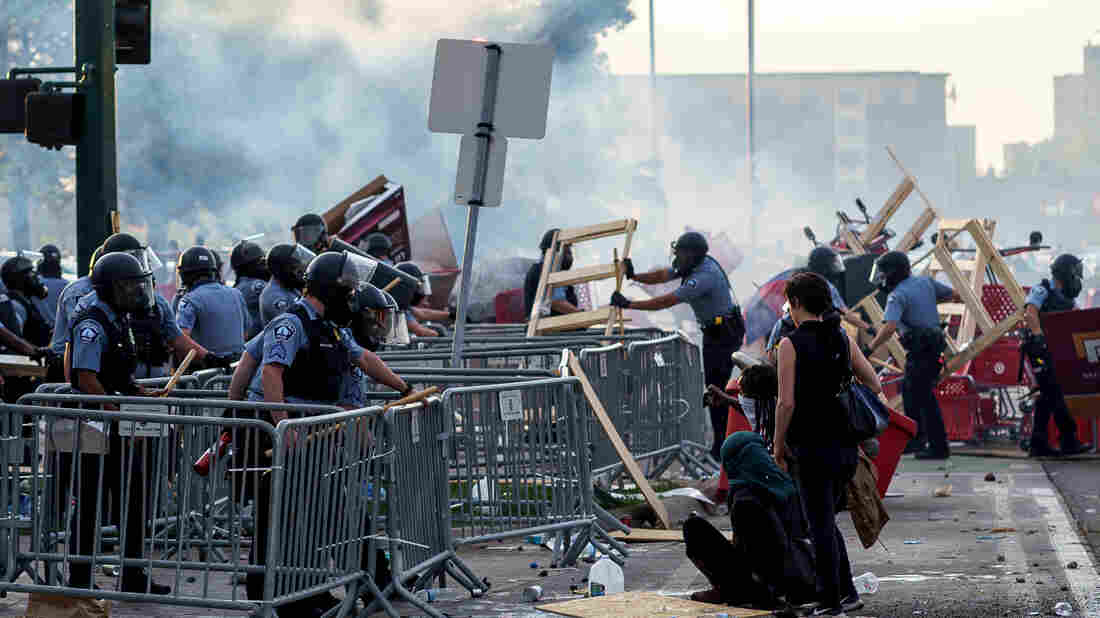 Protesters approach riot police during a demonstration Wednesday evening in Minneapolis. The protests turned violent as unrest erupted once more over the death of Floyd. Kerem Yucel/AFP via Getty Images hide caption 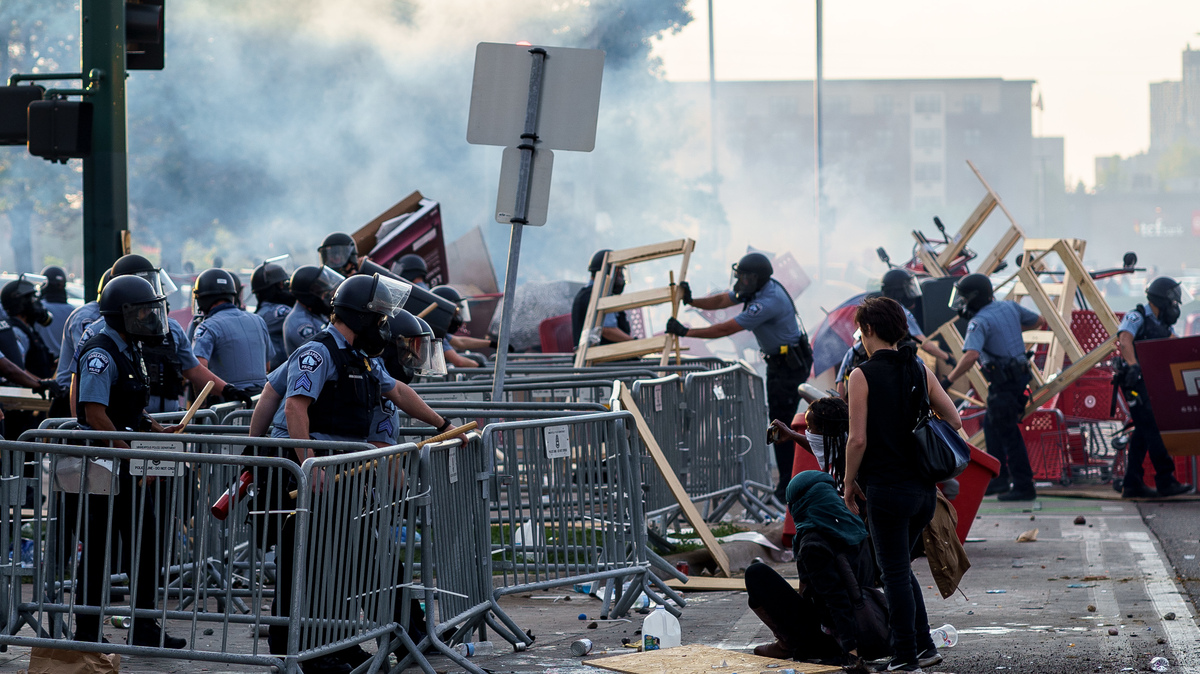 Protesters approach riot police during a demonstration Wednesday evening in Minneapolis. The protests turned violent as unrest erupted once more over the death of Floyd.

In a quieter response, the University of Minnesota announced that it was immediately limiting its links with the Minneapolis Police Department, saying its Minneapolis campus would no longer contract with the department for extra security support.

"As a community, we are outraged and grief-stricken," university President Joan Gabel said in a letter to faculty, students and staff that the school shared with NPR. "I do not have the words to fully express my pain and anger and I know that many in our community share those feelings, but also fear for their own safety. This will not stand."

Furor spreads across the country

The outrage elicited by the video also has been evident well beyond the bounds of Minneapolis — particularly in downtown Los Angeles, where hundreds of protesters took to the streets Wednesday. The demonstrations were such that the Los Angeles police chief, Michel Moore, released a statement concerning Floyd's death. 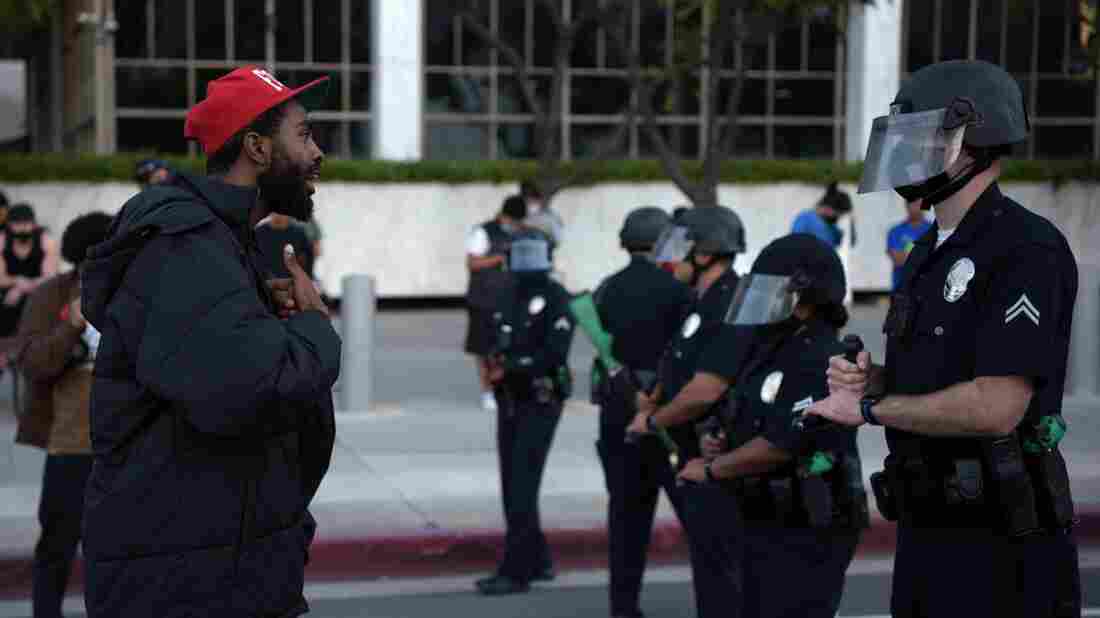 A demonstrator explains himself to an officer in riot gear during a protest Wednesday in downtown Los Angeles. The impact of Floyd's death has been felt well beyond Minneapolis' city limits. Agustin Paullier/AFP via Getty Images hide caption 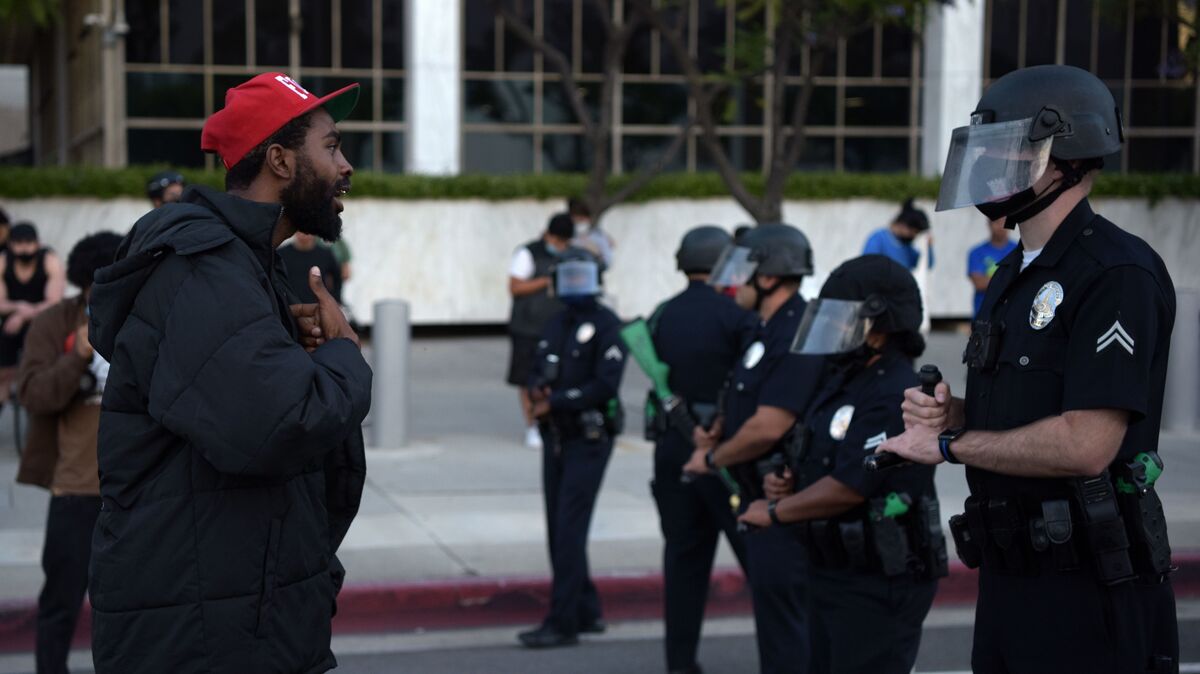 A demonstrator explains himself to an officer in riot gear during a protest Wednesday in downtown Los Angeles. The impact of Floyd's death has been felt well beyond Minneapolis' city limits.

"The actions I watched in the video were incredibly disturbing and go against the basic law enforcement principle of preservation of life," he said, also acknowledging that the Los Angeles Police Department "has had our own high-profile incidents."

"The lack of compassion, use of excessive force, or going beyond the scope of the law, doesn't just tarnish our badge — it tears at the very fabric of race relations in this country."

President Trump also took notice. He tweeted that he had requested a federal investigation into Floyd's "very sad and tragic death," and during a briefing, White House press secretary Kayleigh McEnany said he had watched the video aboard Air Force One.