Accessibility links
What To Know About Hong Kong's Special Status And What Happens If The U.S. Removes It Here are some key points about what the latest moves by Beijing and Washington may mean for Hong Kong. 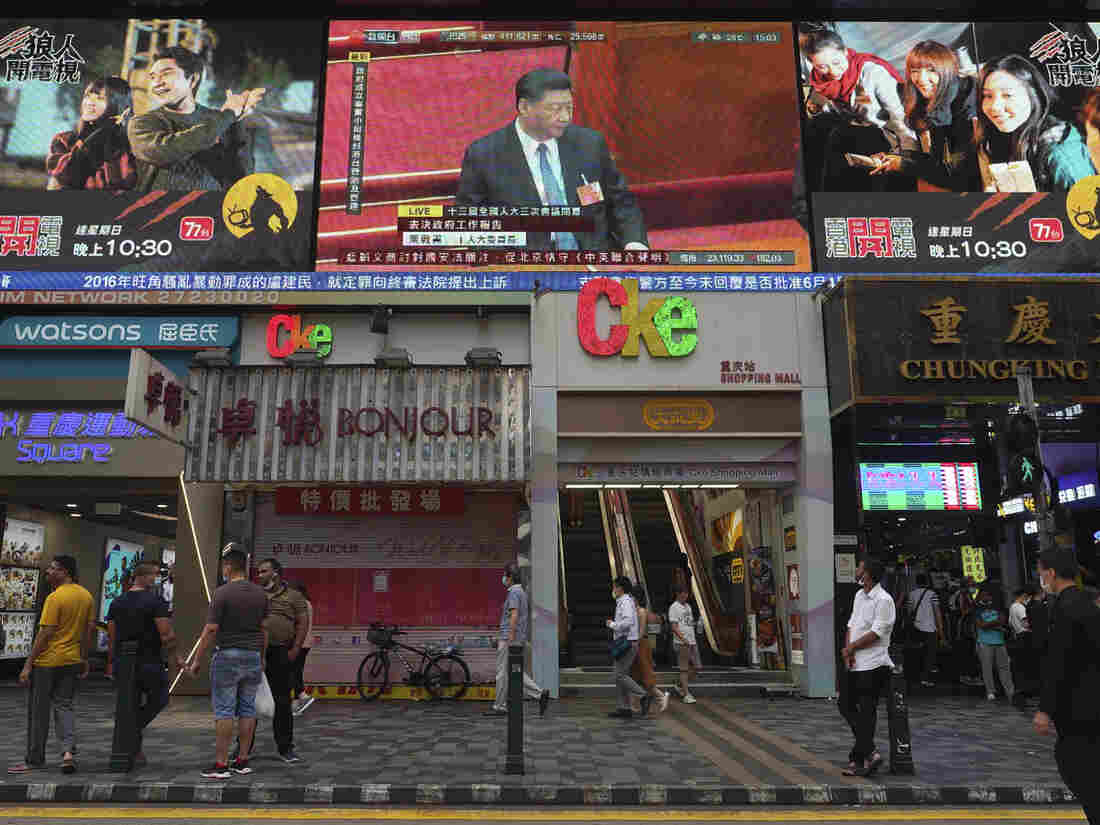 Pedestrians in Hong Kong walk under a giant screen showing a live telecast of Chinese President Xi Jinping, at the closing session of the National People's Congress on Thursday. Vincent Yu/AP hide caption 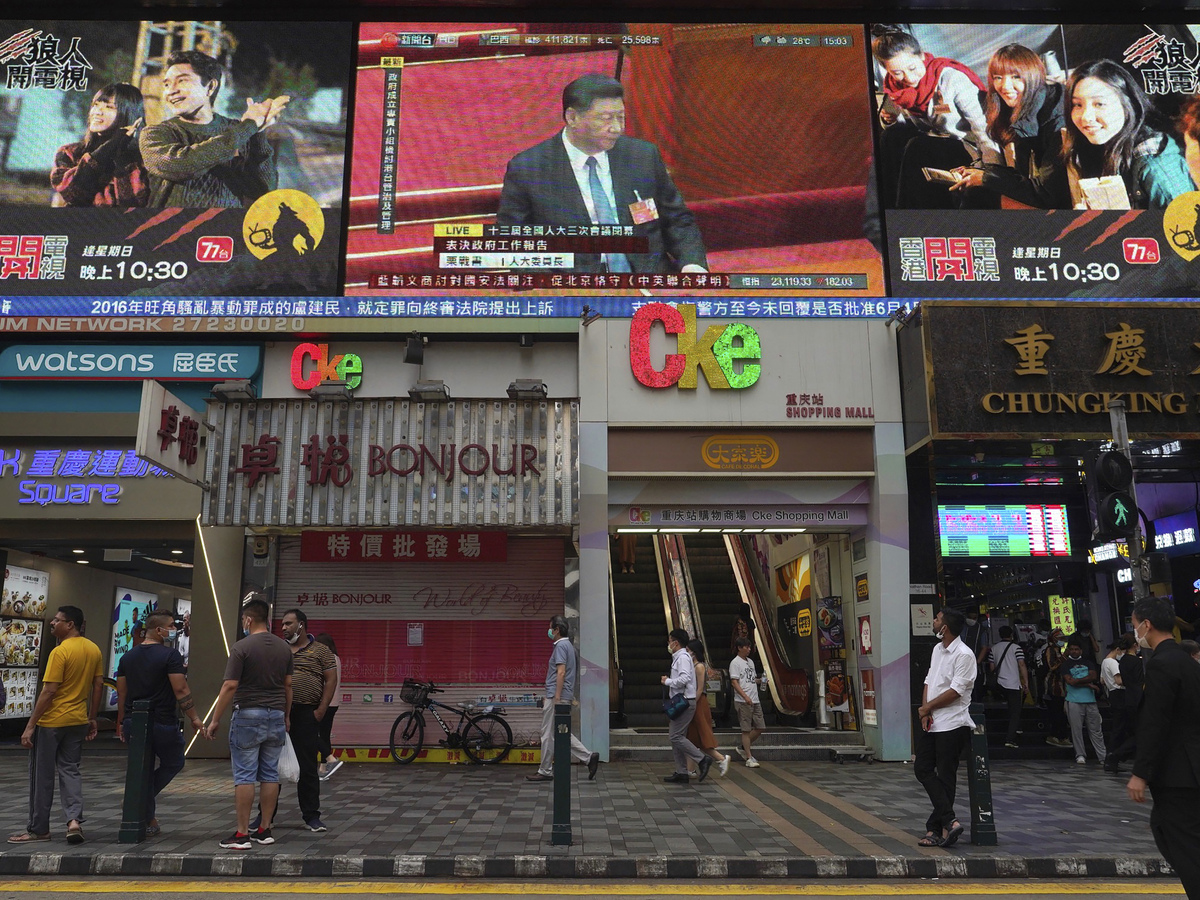 Pedestrians in Hong Kong walk under a giant screen showing a live telecast of Chinese President Xi Jinping, at the closing session of the National People's Congress on Thursday.

Secretary of State Mike Pompeo declared this week that Hong Kong is no longer sufficiently autonomous from China "to warrant treatment under United States laws in the same manner as U.S. laws were applied to Hong Kong before July 1997." The decision followed Beijing's announcement that it would draft sweeping national security legislation for the former British colony, sidestepping the city's own legislature to outlaw secession, subversion and terrorism.

Here are some key points about what the latest moves by Beijing and Washington may mean for the city.

What is Hong Kong's special status?

Five years before Britain handed control of Hong Kong to China on July 1, 1997, U.S. policymakers agreed to continue to effectively treat the territory as a separate entity from China beyond that date.

Under the United States-Hong Kong Policy Act of 1992, the U.S. affords Hong Kong special status as a part of China and agreements governing a range of interactions including commerce between the U.S. and Hong Kong that predated the handover would remain in effect.

From the U.S. perspective, perhaps the biggest way in which Hong Kong is treated as separate from China has been in trade and economics. The U.S. recognizes Hong Kong as a unique customs territory, which means it has been largely spared the upheaval of the U.S.-China trade war. Hong Kong is one of the United States' biggest export markets and it has a zero tariff rate on U.S. imports.

Hong Kong is also a key global financial center, a status it earned through decades of an open economy and rule of law. It's been a critical conduit for investment flows into and out of China.

The United States government has not revoked Hong Kong's special status — yet.

'No Reasonable Person Can Assert' Hong Kong Has Autonomy From China, Pompeo Says

Under a 2019 amendment to the U.S.-Hong Kong Policy Act, the secretary of state is required to report to Congress at least once a year on the status of Hong Kong. Pompeo's decertification of Hong Kong as sufficiently autonomous from Beijing opens the door to concrete action by the administration, including possible sanctions.

According to U.S. law, Hong Kong's special treatment since July 1997 has always been contingent on China abiding by its promise to let the territory remain largely autonomous. That promise was codified in Hong Kong's mini-constitution, the Basic Law, which allows Hong Kong to manage its affairs in all areas except national defense and foreign policy under an arrangement called "one country, two systems."

The Basic Law requires the Hong Kong government to enact laws "on its own" to prohibit treason, secession, sedition, subversion, theft of state secrets, and to ban foreign political organizations from conducting political activities in Hong Kong.

The Hong Kong government tried to do so in 2003, but failed due to widespread public opposition. Critics fear such laws could be used to silence dissent or curtail civil liberties. So China's ruling Communist Party has taken matters into its own hands, and with its drafting of national security legislation will unilaterally impose such laws on Hong Kong, circumventing Hong Kong's own legislature.

Pompeo saw that move as part of an "escalating assault on the territory," marked by the erosion of liberties at the hands of Beijing. In 2019, he certified that Hong Kong maintained "a sufficient — although diminished — degree of autonomy." China's actions since then, including this week's, pushed it over the line, he said.

What are the implications?

Assistant Secretary of State for East Asian and Pacific Affairs David Stillwell said on Wednesday the U.S would try to "thread the needle" when it comes to action.

"We're going to do this in a smart way, in a way that takes care of the things and the people we care about, while at the same time letting Beijing know that what they're doing ... contravenes what they agreed to do back in '97," he told reporters.

That may be a challenge.

Hong Kong has long been a regional hub for American businesses drawn by Hong Kong's free-market traditions, the rule of law and civil liberties. Close to 1,400 U.S. firms have operations there, according to the U.S. Consulate. Bilateral trade was nearly $67 billion in 2018, according to the United States Trade Representative, and the stock of U.S. foreign direct investment totaled more than $82 billion in 2017.

"Nearly every major U.S. financial firm maintained a presence in Hong Kong, with hundreds of billions of dollars in assets under management," according to the State Department's 2019 Hong Kong policy report.

The U.S. is not alone. Australia, Canada and Britain joined the United States in a public statement on Hong Kong on Thursday, expressing deep concern over China's decision to impose the national security law and saying Beijing's action jeopardized Hong Kong's stability and prosperity.

Beijing's increasingly heavy hand in Hong Kong affairs has made many businesses nervous, particularly when it comes to questions around the potential erosion of liberties and judicial independence. But equally, huge and sometimes violent street protests in recent years — in reaction to Beijing's encroachments on Hong Kong affairs — have also dented the territory's image as a stable place to conduct business.

A decision by the U.S. to revoke all or parts of Hong Kong's trade status could add to strains on businesses operating there — and those actions would undoubtedly be met by retaliation from an angry Beijing.

For Hong Kong's 7 million people, it's a more complicated story. Some activists have welcomed Pompeo's remarks, and see foreign help as the only way now to push back against Beijing.

Others — in line with the thinking of the Chinese government — feel the U.S. has no say in what they consider an internal affair. Either way, their hometown appears to be in for some monumental changes.