Accessibility links
Questlove Is Hosting A Virtual Potluck The Roots drummer, DJ and cookbook author isn't letting a pandemic slow him down — he's still performing on The Tonight Show, and now he's hosting a virtual potluck dinner party on the Food Network. 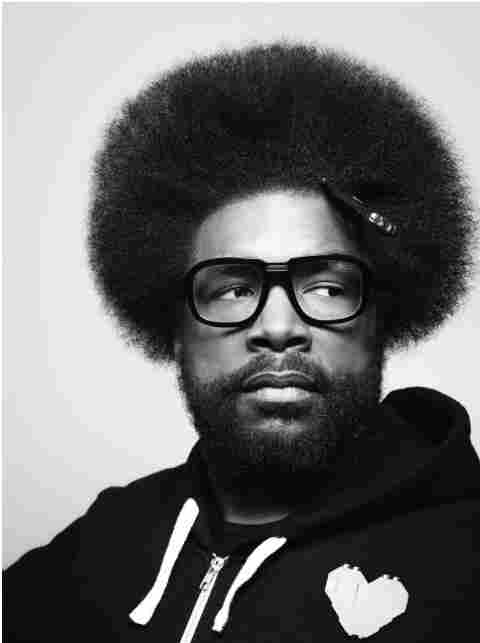 Ahmir "Questlove" Thompson is not letting the pandemic slow him down. The Roots drummer, DJ, author and entrepreneur is still performing on The Tonight Show Starring Jimmy Fallon, DJ'ing live on Instagram, and he and his Roots' bandmate Tariq "Black Thought" Trotter recently signed a production deal with NBC. As if that weren't enough, tonight he's hosting Questlove's Potluck, a virtual dinner party on the Food Network.

Even though Questlove is a cookbook author who, pre-pandemic, frequently hosted in-person potluck dinners and "Food Salons" with chefs, he says he wasn't sure hosting a TV special was a good idea.

"I first thought 'Questlove's Potluck?' Like, who wants to talk about a hoity-toity dinner party in these times, especially when you can't do those things," he says. But then he noticed that with everyone at home all the time, people have "ramped up" their "creativity" around food.

"There's a bunch of my friends from work who have these creative challenges with food." But he says, these days, they'll tell him "'Today I'm going to tackle this recipe,' and that sort of thing." Plus, Questlove wanted to raise money for a good cause, America's Food Fund. "So it was almost kind of like a no-brainer."

Questlove On Prince, Doo-Wop And The Food Equivalent Of The 'Mona Lisa'

Questlove Invites You To A 'Mixtape Potluck'

A no-brainer because Questlove's friends include acclaimed artists and comedians like Tiffany Haddish, who made oil-less fried chicken which she calls "She Ready Chicken," singer Patti LaBelle, who made branzino, actress Eva Longoria, who made arroz con pollo, and actress and comedian Maya Rudolph, who made a cocktail in which she shamelessly substituted Gatorade for grapefruit juice. Questlove says he told them to keep the budget for whatever they cooked to $25 or under.

That didn't seem too difficult for comedian Roy Wood, Jr., who showed Questlove his pantry with a warning that there were "a lot of things in this pantry that don't match, like almond milk and Oreos but they're both vegan, so I need you to relax."

Questlove believes "Food is social adhesive." He says for years, as a touring musician, he rarely had family-style meals. Now, under quarantine with several other people, they have group meals together all the time, and it's not just about the food.

"You have to bring an interesting topic to the table. You have to debate topics. And it's not just like you eat your meal and you leave," he says. "The rule that we have is that when we get up from this table, we have to learn something better about ourselves that we never learned before. So I love that."

This is divine intervention, Mother Nature's way, or whoever, whatever divine force is watching us right now as a wake-up call for all of us to really look inside of us and be about that change.

Questlove believes the pandemic is forcing people to think about who they are and what they stand for. During his most recent Tuesday night live DJ session on Instagram, he talked about how this week's high profile cases of racism and brutality against African-Americans left him feeling "raw." He says he's still processing how, as an artist and an activist, he should respond.

"We've seen tragedy after tragedy after tragedy, a tragedy and often times, we just see the same. The same formula of ...'Oh this will soon be forgotten, like all those times we heard of school shootings. Three days later, we're just back to normal," he says. "I feel like [the pandemic] ... This is divine intervention, Mother Nature's way, or whoever, whatever divine force is watching us right now as a wake-up call for all of us to really look inside of us and be about that change. ... And so that's what I'm doing right now."