Accessibility links
Bernie Sanders' Campaign Could Provide Lessons For Biden Latino Outreach Democrats who are worried the Biden campaign isn't doing enough to engage Latino voters are pointing to the success his primary rival had among the largest minority voting group in the 2020 election. 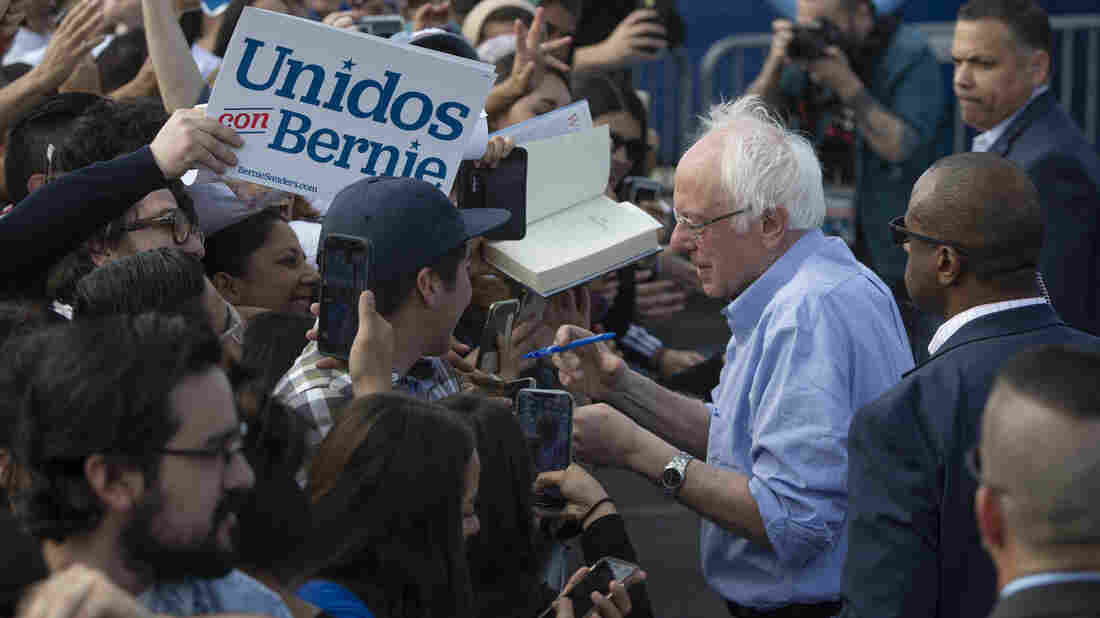 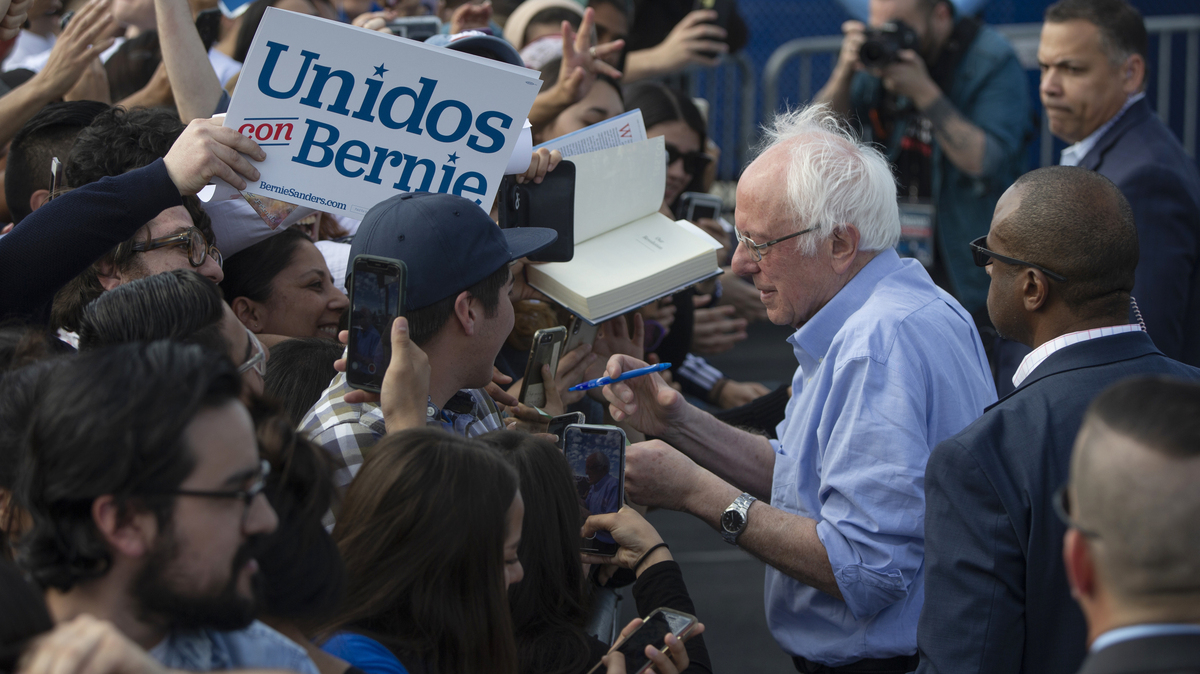 Former Vice President Joe Biden's campaign has been facing pressure from Democratic operatives and activists, worried that his Latino outreach efforts are not enough and potentially a serious liability in the fall election.

Some say that his campaign, which is staffing up to improve those efforts, could learn lessons from the success of one of his former rivals.

"I think there's a lot that the Biden campaign can learn from Bernie Sanders," said Stephanie Valencia, a co-founder of EquisLabs. "A lot of what he did was not rocket science."

Biden's campaign lagged behind the senator from Vermont in organizing Latino voters during this year's primaries, while Sanders focused heavily on Latinos in Iowa and Nevada and won the most votes from Latinos in the California and Texas primaries.

Latinos are set to be the largest minority voting group in November, with 32 million eligible voters. Their share of the electorate is particularly large in states such as Arizona and Florida, both general election battlegrounds.

Clarissa Martinez, a deputy vice president of UnidosUS, said there is a "consistent lack of outreach to the Latino electorate, and that election eve polls of Latino voters have found that the majority of registered Latino voters say they received no contact from campaigns."

"When you look at the Sanders campaign and their strategy, in many ways we are not talking about a playbook that is unknown for candidates," she said. "The reality is for this electorate, as well as for other segments of the electorate, candidates matter, their positions matter and meaningful outreach is essential. With Latinos, much of that outreach is not happening."

Chuck Rocha, who built Sanders' Latino outreach program and is now launching a political action committee to target Latinos, said that one of the reasons the Sanders campaign was so successful was that it was willing to invest resources early.

"Just the raw expenditure of the money, making sure that this is not some kind of, what I call brown-washing. Just going up with one Latino commercial for a week and saying, 'We've done Latino outreach,' " he said. "Spending real money. If you'd spend the same percentage of money on a white voter that you would a Latino voter, then I will be very satisfied. You know, we spent a million and a half dollars on Latino outreach alone in Iowa, of all places, and it was just 6% of the population."

By the end of the Sanders campaign, Rocha estimated, there were more than 200 Latino staffers on the payroll, and the campaign employed Latino consultants and vendors to create advertising content.

"Another part of the success was there was a Latino or a Latinx person in charge of creating every piece of material that was communicated to another Latino," Rocha said. "So unlike all the other campaigns, who just have regular white establishment consultants who would horribly Google Translate something to Spanish that was made for a white person in the suburbs, we would actually use cultural competency to make sure that that piece was done through the lens of a Latino, by a Latino, for a Latino."

The Biden campaign has in recent days announced a number of high-profile staff hires that will add increased racial diversity to his campaign. 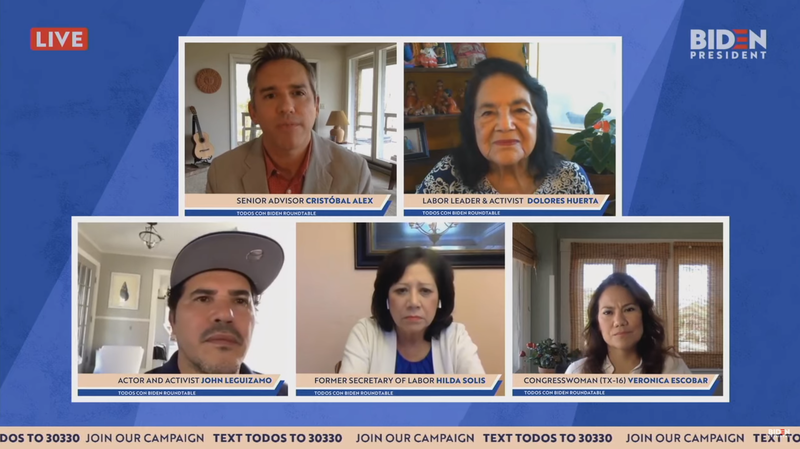 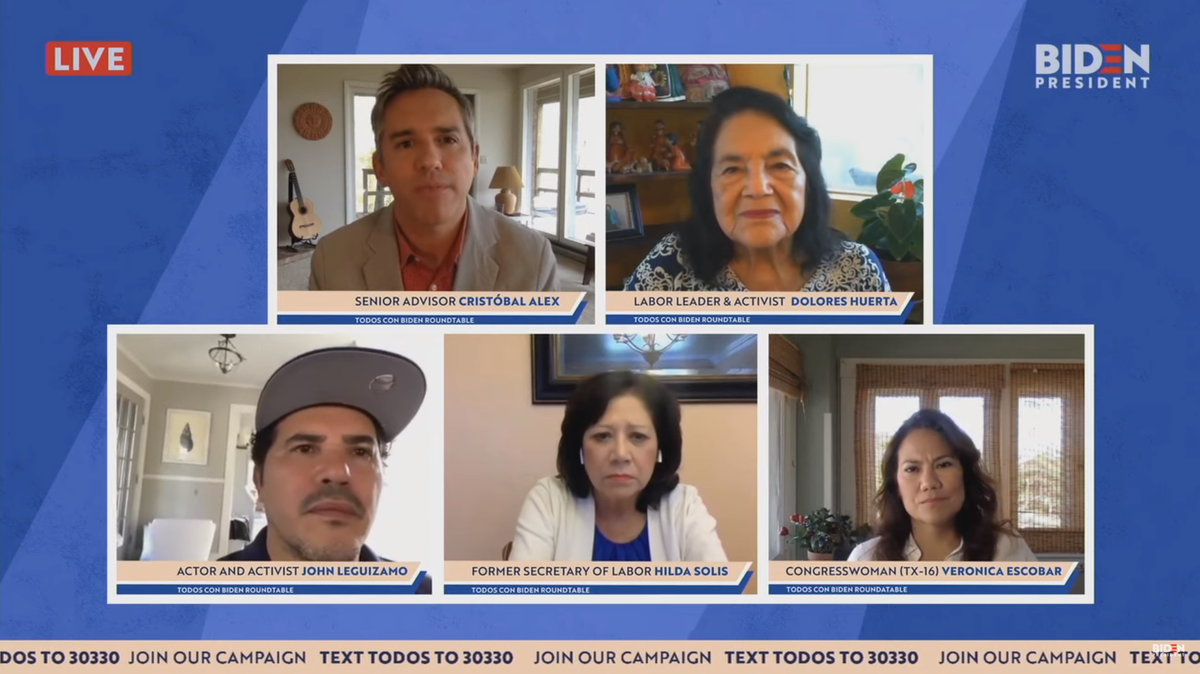 The Biden campaign has not released staff diversity numbers and declined comment on its Latino outreach strategy. While in-person campaigning has come to a stop amid the coronavirus pandemic, the campaign has been doing targeted outreach, including regular "Todos con Biden" virtual events with supporters, and booking appearances for Biden on outlets that will reach Latino audiences.

Biden entered the race for the presidency with a strained relationship with many Latino groups, largely tied to the Obama administration's immigration policies, particularly its aggressive deportation policy. Biden acknowledged earlier this year that the policies were a mistake and caused many families pain, and he released his own immigration plan late last year. But many activists said Biden has a great deal of work to do to earn trust and increase enthusiasm.

"Immigration is not the only important issue for the Latinx community, but it is the issue that gets at the heart of our community," said Cristina Jiménez, executive director of United We Dream Action, a youth activist group that endorsed Sanders, along with Sen. Elizabeth Warren of Massachusetts, over Biden. "Sen. Sanders adopted one of the most progressive positions, along with Sen. Warren, of stopping deportations in the first 100 days if they were to be in the White House in 2021."

It is pressing for Biden to include in his platform an end to the collaboration between U.S. Immigration and Customs Enforcement and local law enforcement, and to commit that undocumented immigrants receive benefits in future COVID-19 recovery efforts.

But immigration politics in the general election differ sharply from the primaries, especially as Biden runs against President Trump, whose administration has pursued highly restrictive immigration policies following his 2016 campaign in which he frequently disparaged immigrants as bad for the country.

Republicans seized on an early moment in the 2020 Democratic primary race when Biden joined nine other candidates in raising their hands when asked at a debate if their health care plans sponsored by the government would provide coverage to undocumented immigrants. Biden later suggested he would provide emergency coverage.

Once again, turnout is key

In 2016, Trump did marginally better among Latinos than Republican nominee Mitt Romney in 2012, according to exit polls. But for Democrats in 2020, a lack of engagement may be the biggest risk.

Valencia, the EquisLabs co-founder, warned that if Democrats don't act, her group predicts that 60% of eligible Latino voters in battleground states will stay home. In 2016, 12.7 million Latinos voted, compared with the 27 million who were eligible.

"It's a huge and scary number for us to contend with, but also is a huge opportunity because that 60% number is what we're basically calling an ambivalent voter. And basically what that ambivalent voter is is not somebody who's hyperpartisan. They're not definitely voting for Biden, or they're not definitely voting for Trump," Valencia said. "There's a lot of room for Biden to reintroduce himself to the community and get these folks off of the couch, and to get them out of the house and voting or voting by mail."

Valencia said that Latinos who were ambivalent broke for Clinton over Trump, but nearly 30% ended up not voting all. So, if Democrats want to expand their Latino electorate in 2020, they need to convince more Latinos to vote in the first place.