Accessibility links
George Floyd: Trump Makes Somber Remarks The president made more somber remarks after he faced criticism for saying he would send in the National Guard and that "when the looting starts, the shooting starts." 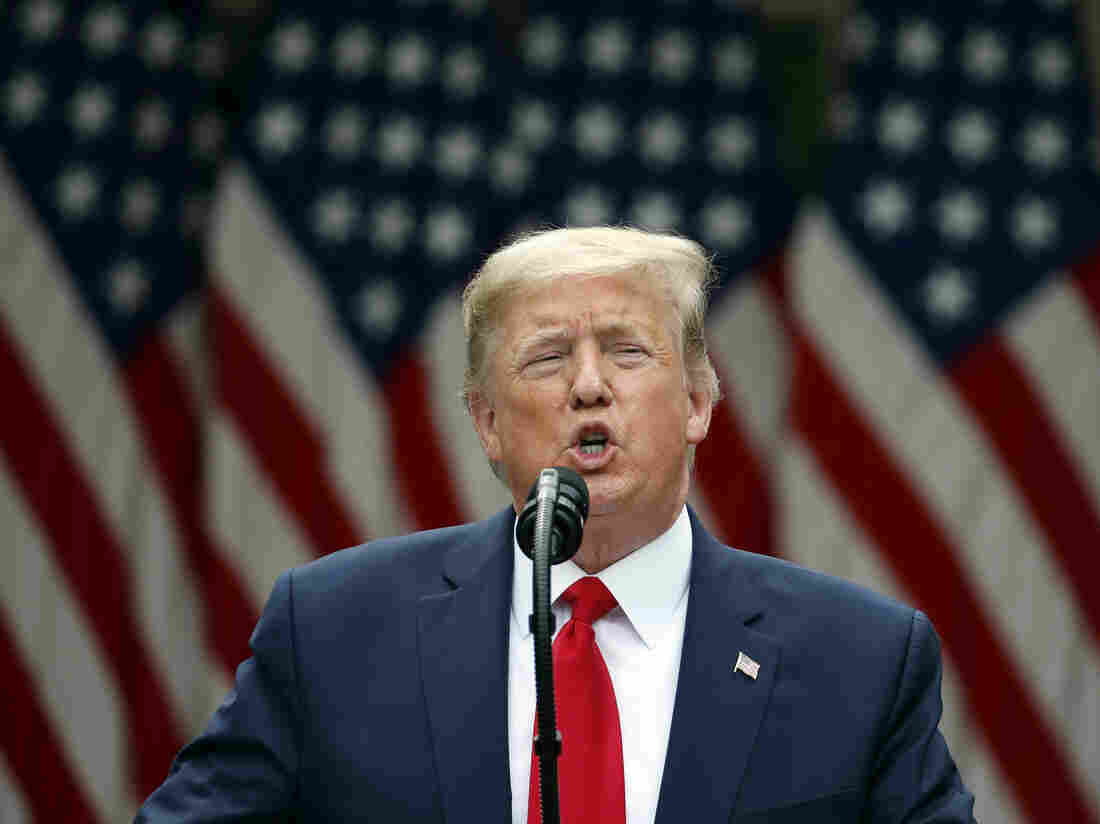 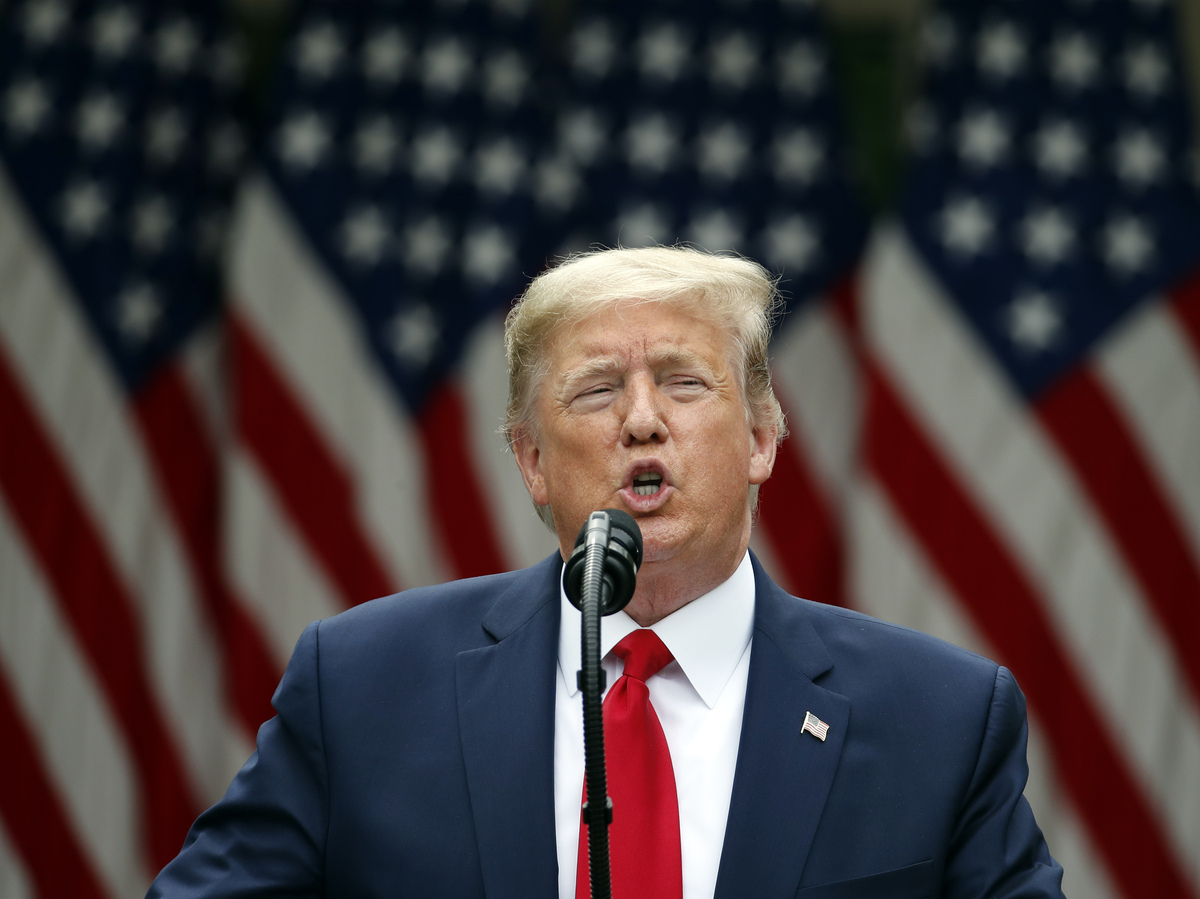 President Trump speaks Friday in the Rose Garden of the White House.

President Trump on Friday evening struck a more somber tone talking about the death of George Floyd and recent protests in Minneapolis. The comments at the White House came after a day of criticism over a tweet that referred to protesters there as thugs and prompted a warning from Twitter, which said the president glorified violence.

Floyd, a black man, died after Officer Derek Chauvin, as seen on video, held his knee firmly on Floyd's neck for at least seven minutes. Chauvin was arrested Friday and charged with killing Floyd. Before his arrest, protesters burned and looted buildings in Minneapolis, including a police precinct.

"We have peaceful protesters and support the rights for peaceful protesters — we can't allow a situation like happened in Minneapolis to descend further into lawlessness, anarchy and chaos," Trump said. The president said he had spoken with Floyd's family before the news event.

Trump also said he understood the hurt and pain of people who have "been through a lot."

"The family of George is entitled to justice and the people of Minnesota are entitled to live in safety," he said. "Law and order will prevail."

The president's more recent message is a significant departure from his early Friday tweets on the event, in which he referred to protesters as "THUGS" and said "when the looting starts, the shooting starts."

Trump's message on Twitter came during a night of protests and looting in Minneapolis.

Trump said Friday morning he would "send in the National Guard" to restore order.

"I can't stand back & watch this happen to a great American City, Minneapolis," Trump tweeted. "A total lack of leadership. Either the very weak Radical Left Mayor, Jacob Frey, get his act together and bring the City under control, or I will send in the National Guard & get the job done right."

He added: "These THUGS are dishonoring the memory of George Floyd, and I won't let that happen. Just spoke to Governor Tim Walz and told him that the Military is with him all the way. Any difficulty and we will assume control but, when the looting starts, the shooting starts. Thank you!"

The phrase "when the looting starts, the shooting starts" was used in December 1967 remarks from then-Miami police Chief Walter Headley. Headley was discussing his efforts to cut crime in the Florida city, with the message "aimed at young Negro males, from 15 to 21," according to the Miami Herald.

Trump said later Friday he wasn't aware of the history behind the phrase, but that he'd "heard that phrase for a long time."

Twitter hid the second of Trump's messages with a warning but added it "has determined that it may be in the public's interest for the Tweet to remain accessible."

Trump also responded Friday on Twitter, saying Twitter was doing "nothing about all of the lies & propaganda being put out by China or the Radical Left Democrat Party."

Trump followed up his earlier statements with a new series of tweets, writing: "Looting leads to shooting, and that's why a man was shot and killed in Minneapolis on Wednesday night - or look at what just happened in Louisville with 7 people shot. I don't want this to happen, and that's what the expression put out last night means."

Trump was referring to the shootings of seven demonstrators Thursday night in Louisville, Ky. They had been protesting the killing of 26-year-old Breonna Taylor. Taylor was killed by Louisville police in March when officers forced their way into her apartment and fired shots, striking her eight times.

"It was spoken as a fact, not as a statement," Trump wrote of his early tweets. "It's very simple, nobody should have any problem with this other than the haters, and those looking to cause trouble on social media. Honor the memory of George Floyd."

"Twitter is targeting the president of the United States 24/7, while turning their heads to protest organizers who are planning, plotting, and communicating their next moves daily on this very platform," Scavino tweeted. "Twitter is full of [s***] — more and more people are beginning to get it."

The president's tweets about the situation in Minneapolis and Twitter's response to it bring to a head two major stories that have dominated the news this week.

In the first, a white officer appears to shove Floyd's face into the pavement with his knee for at least seven minutes on Monday evening. Several minutes into the video, Floyd's pleas for help go quiet. Floyd was reported dead later that night.

The Minneapolis Police Department swiftly fired the four officers shown in the disturbing video. The U.S. Justice Department said it has made the investigation into Floyd's death "a top priority." But some protesters weren't placated. The 3rd Precinct police building in Minneapolis was set on fire Thursday night. Gov. Tim Walz signed an executive order activating the Minnesota National Guard.

In the second story, Twitter fact-checked a Trump tweet that said mail-in voting leads to fraud, prompting the president to sign an executive order Thursday aimed at limiting the broad legal protections social media companies enjoy. But legal experts said they doubt the move would have any practical effect on the tech giants.

Before this week, Twitter had not fact-checked the president or hidden any of his messages on the platform.

Trump's tweet on violence against protesters in Minnesota also highlights the discrepancy between what form of demonstrations the president and his allies deem appropriate versus others.

Earlier this month, when armed protesters stormed the Michigan statehouse demanding that Gov. Gretchen Whitmer lift coronavirus mitigation measures, Trump criticized the governor and endorsed the protesters' actions as a response to the frustrations from the emotional and financial tolls of the pandemic.

"The Governor of Michigan should give a little, and put out the fire. These are very good people, but they are angry. They want their lives back again, safely! See them, talk to them, make a deal," Trump wrote in a May 1 tweet.

Former President Barack Obama, who has largely stayed silent on political matters since leaving the White House, issued a statement Friday on the events in Minnesota and addressed Floyd's death and other recent racial incidents.

"It's natural to wish for life 'to just get back to normal' as a pandemic and economic crisis upend everything around us," Obama said. "But we have to remember that for millions of Americans, being treated differently on account of race is tragically, painfully, maddeningly 'normal' — whether it's while dealing with the health care system, or interacting with the criminal justice system, or jogging down the street, or just watching birds in a park."

He added: "It will fall mainly on the officials of Minnesota to ensure that the circumstances surrounding George Floyd's death are investigated thoroughly and that justice is ultimately done. But it falls on all of us, regardless of our race or station — including the majority of men and women in law enforcement who take pride in doing their tough job the right way, every day — to work together to create a 'new normal' in which the legacy of bigotry and unequal treatment no longer infects our institutions or our hearts."