Accessibility links
Ex-Minneapolis Officer Derek Chauvin Charged With Murder In George Floyd's Death Derek Chauvin, the former Minneapolis officer who planted a knee on the black man's neck, has been detained by state officials. For days, a video of the arrest has elicited fury across the country. 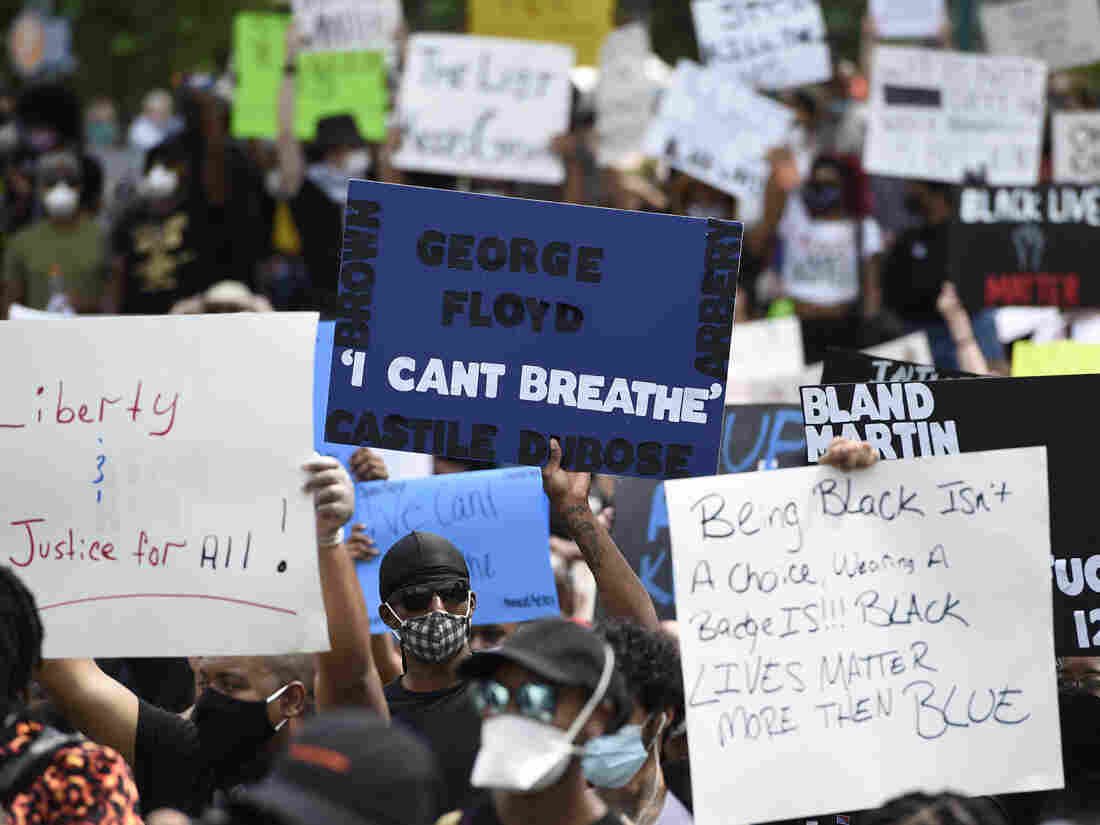 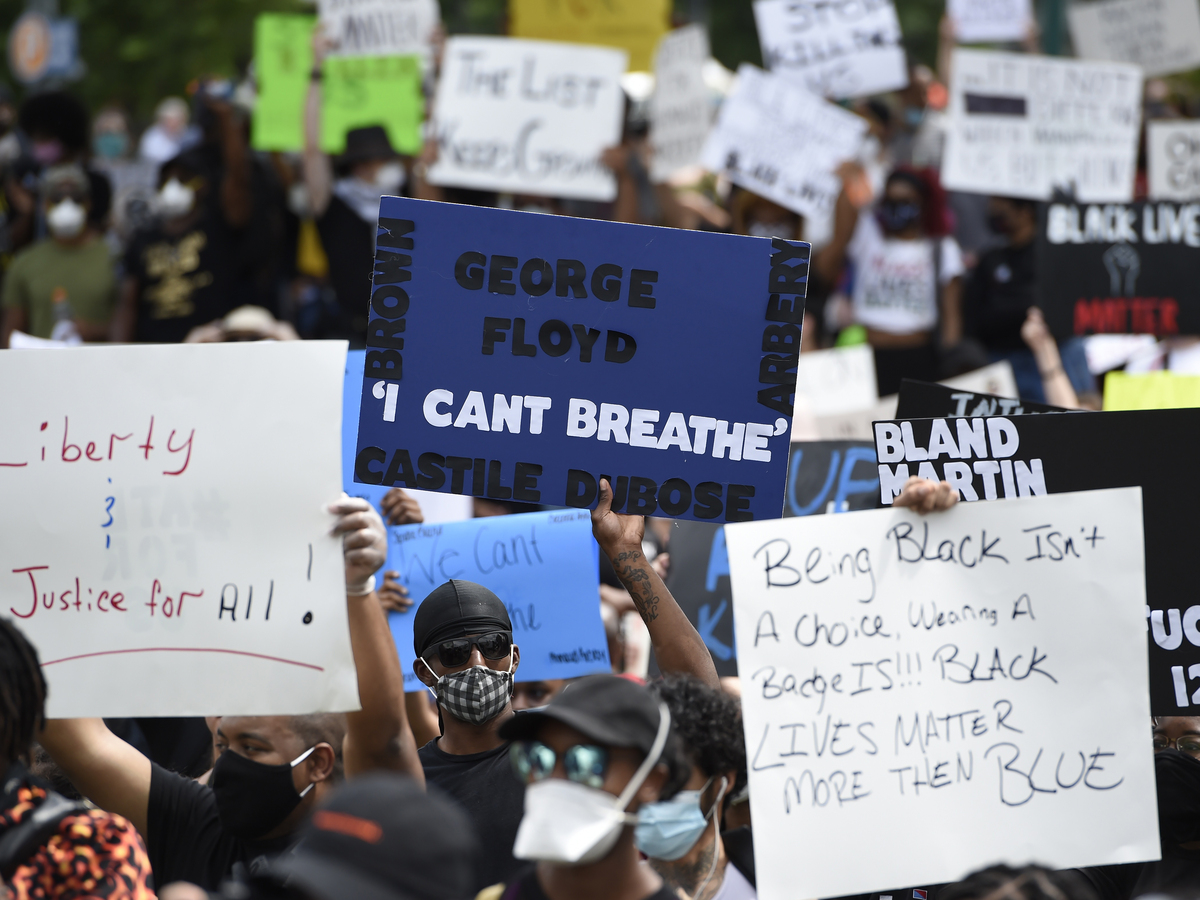 Demonstrators gather Friday in Atlanta's Centennial Olympic Park, one of several protests organized in cities across the United States.

Derek Chauvin, a former Minneapolis police officer involved in George Floyd's death on Monday, has been charged with third-degree murder and manslaughter.

Hennepin County Attorney Mike Freeman announced the charges Friday, shortly after Chauvin was taken into custody by the Minnesota Bureau of Criminal Apprehension.

The announcement comes days after the release of a video that shows Chauvin's knee pressed firmly on the black man's neck for at least seven minutes.

That video has inspired outrage nationwide and unrest in Minneapolis and had led to Chauvin's firing as well as that of three other officers seen in the video. 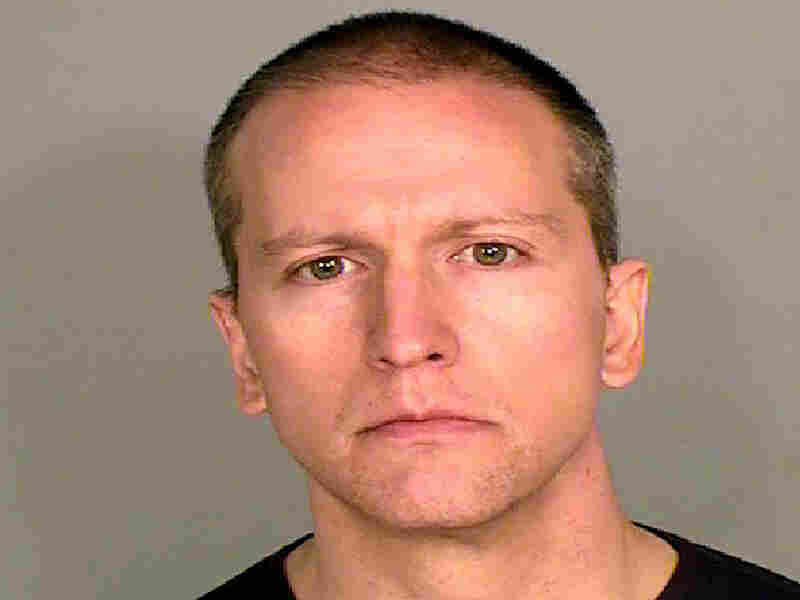 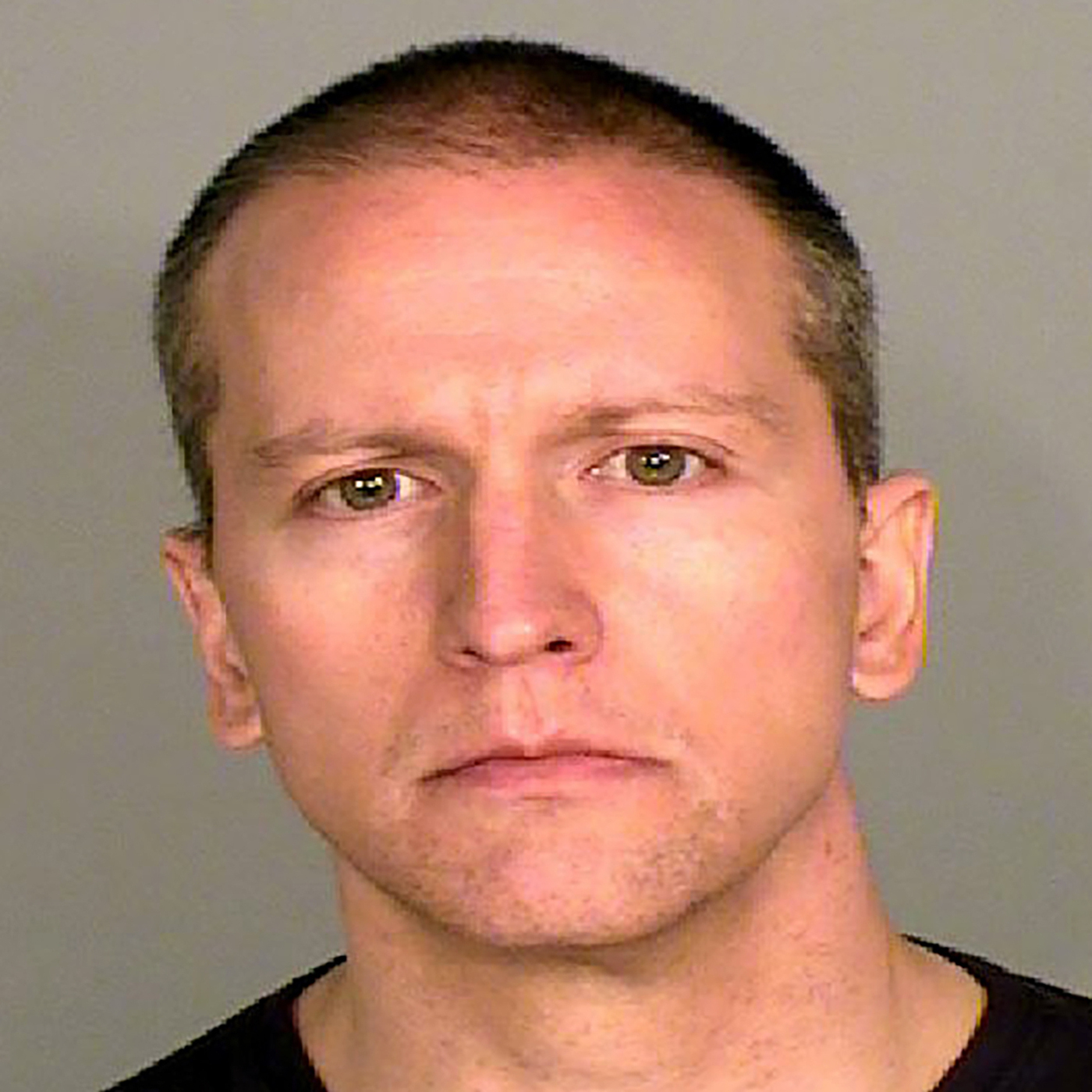 Former Minneapolis police Officer Derek Chauvin, who was arrested Friday and charged with third-degree murder in the death of George Floyd on Monday.

Asked why Chauvin wasn't arrested earlier — something demanded by protesters and Minneapolis Mayor Jacob Frey — Freeman said his office moved as quickly as possible in its investigation. He added that the three other former officers remain under investigation and that he anticipates charges for them, too.

The Department of Justice is also conducting an investigation on "a separate and parallel track," U.S. Attorney General William Barr said Friday in a statement.

"Both state and federal officers are working diligently and collaboratively to ensure that any available evidence relevant to these decisions is obtained as quickly as possible," Barr said. 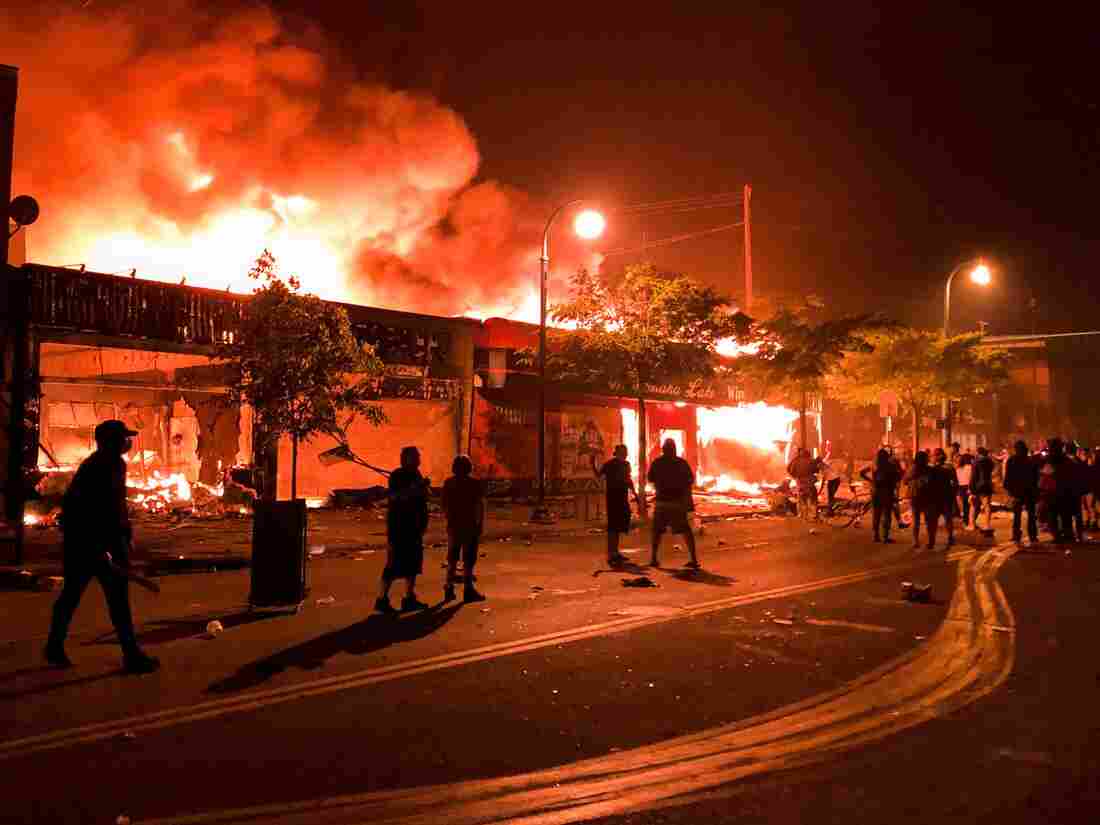 Flames rise from a liquor store and shops near the 3rd Police Precinct in Minneapolis on Thursday, during a protest over the death of George Floyd. Kerem Yucel/AFP via Getty Images hide caption 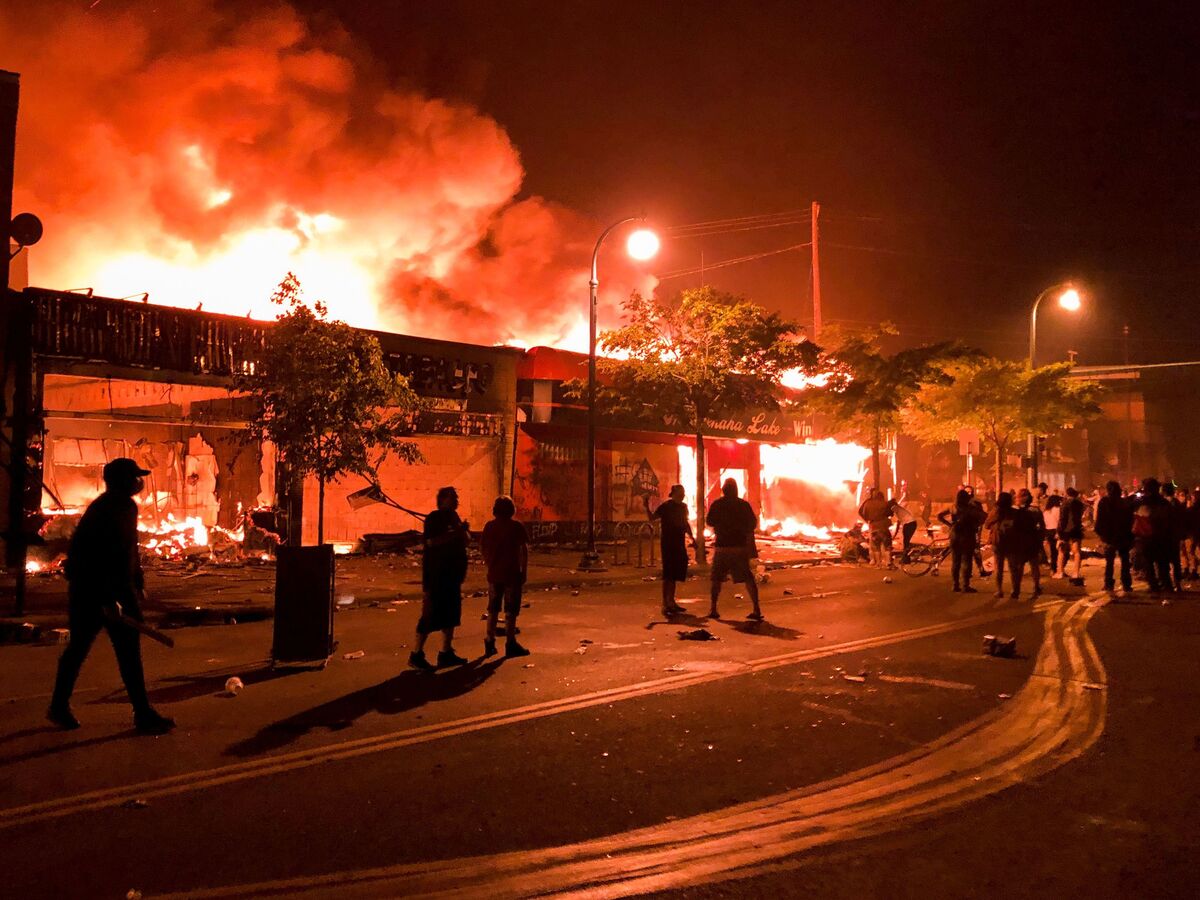 Flames rise from a liquor store and shops near the 3rd Police Precinct in Minneapolis on Thursday, during a protest over the death of George Floyd.

Those investigations, coupled with the officers' firings, has so far failed to satisfy the protesters who had gathered for a third night Thursday in Minneapolis.

Some of them stormed the 3rd Police Precinct, the closest precinct to the site of Floyd's arrest, setting fire to that building after police withdrew in an attempt to mitigate tensions. Rioters burned and looted other buildings in the Twin Cities of Minneapolis and St. Paul.

The region has seethed since the release of the video depicting Floyd's arrest, which shows Floyd crying for help before falling silent, while bystanders shout that he's dying.

The officer did not remove his knee until paramedics showed up to move Floyd's unresponsive body into an ambulance. He was reported dead later Monday night.

In an attempt to avoid another night of chaos, officials ordered a nighttime curfew in Minneapolis and St. Paul beginning at 8 p.m. local time Friday and Saturday nights and continuing until 6 a.m., although the curfew was widely ignored.

Here is the latest on the situation:

Floyd's family said that prosecutors have made "a welcome but overdue step on the road to justice," in a statement issued shortly after the announcement that Chauvin has been charged with third-degree murder and manslaughter.

But they feel that authorities haven't gone far enough.

In Minnesota, a third-degree murder conviction can result in up to 25 years in prison, while murder in the first degree brings a possible life sentence.

"The pain that the black community feels over this murder and what it reflects about the treatment of black people in America is raw," the family added, "and is spilling out onto streets across America." 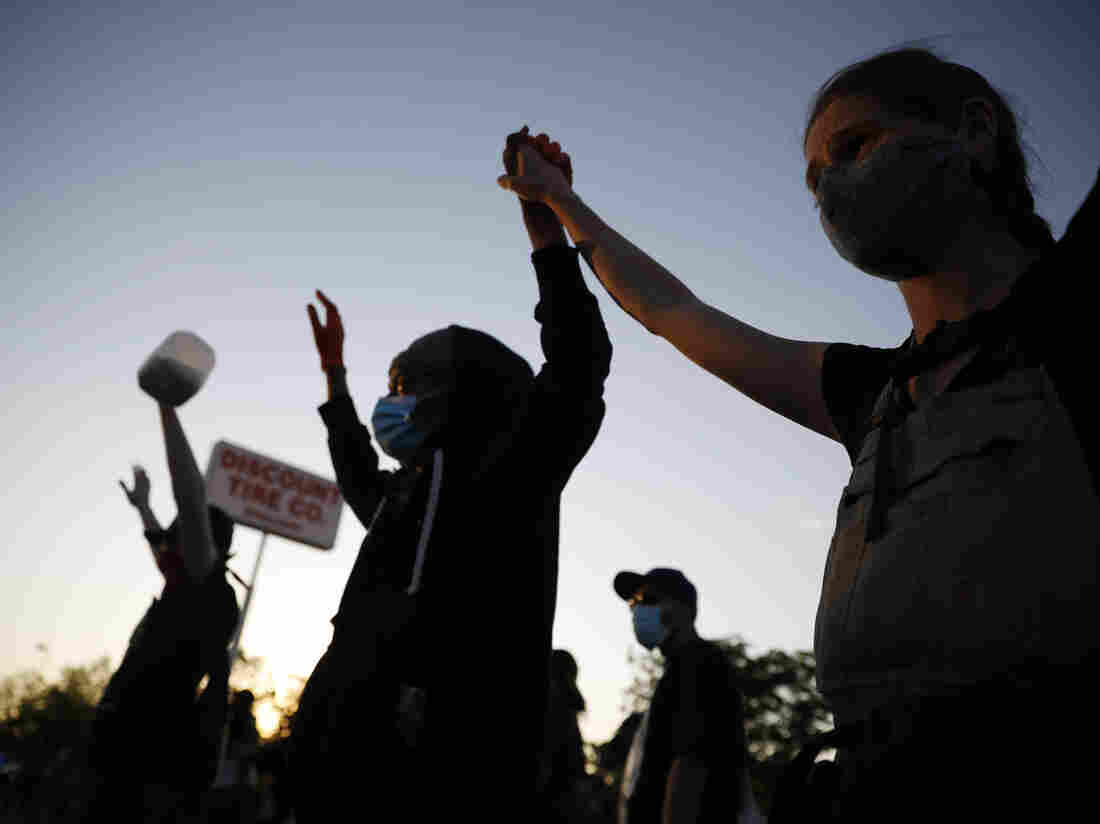 Demonstrators join hands on Thursday in St. Paul, Minn. Protests over the death of George Floyd broke out in Minneapolis for a third straight night. John Minchillo/AP hide caption Demonstrators join hands on Thursday in St. Paul, Minn. Protests over the death of George Floyd broke out in Minneapolis for a third straight night.

Gov. Tim Walz: "I understand clearly there is no trust"

During a news conference Friday morning, the Minnesota governor acknowledged the pain of those outraged by Floyd's death in police custody — whose name he added to a list of "unheard" black men killed by police, including Philando Castile, who was shot in 2016 by police in a suburb of St. Paul.

"The very tools that we need to use to get control to make sure that buildings aren't burned and the rule of law doesn't collapse are those very institutional tools that have led to that grief and pain. I understand clearly there is no trust in many of our communities," Walz told reporters.

"But I'm asking you to help us use humane ways to get the streets to a place where we can restore the justice, so that those that are expressing rage and anger and demanding justice are heard."

The president, who called Floyd's death "very sad and tragic" earlier this week, said early Friday that he had told Minnesota's governor that "the Military is with him all the way."

He also described the source of the unrest as "THUGS" — a word widely criticized for bearing racial overtones.

"Any difficulty and we will assume control but, when the looting starts, the shooting starts," he continued in a tweet partially hidden and flagged by Twitter for violating its policy against "glorifying violence."

Trump did not miss the social network's decision. Not long after the move, the president — who signed an executive order Thursday aimed at limiting the legal protections afforded to social media companies such as Twitter — took aim at the company with a tweet saying it "will be regulated."

Trump later sought to clarify his initial tweet, saying that shooting simply can occur when looting gets out of hand.

"It was spoken as a fact, not as a statement," Trump explained in a pair of tweets. "It's very simple, nobody should have any problem with this other than the haters, and those looking to cause trouble on social media."

In a tweet of his own, former Vice President Joe Biden, the presumptive Democratic nominee, said he is "furious" that Trump "is calling for violence against American citizens during a moment of pain for so many." 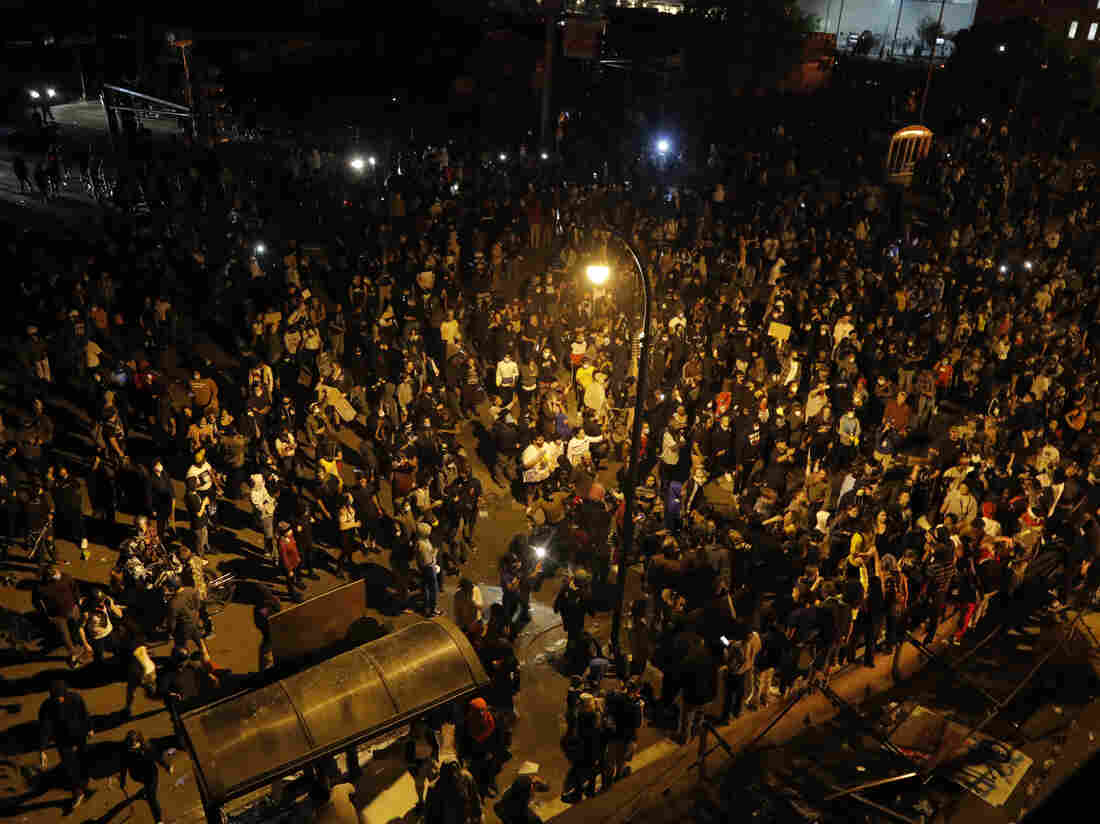 Earlier Thursday night, a crowd of protesters is seen from the roof of the 3rd Precinct in Minneapolis. The building, which was abandoned by officers, was later stormed and set on fire. Julio Cortez/AP hide caption 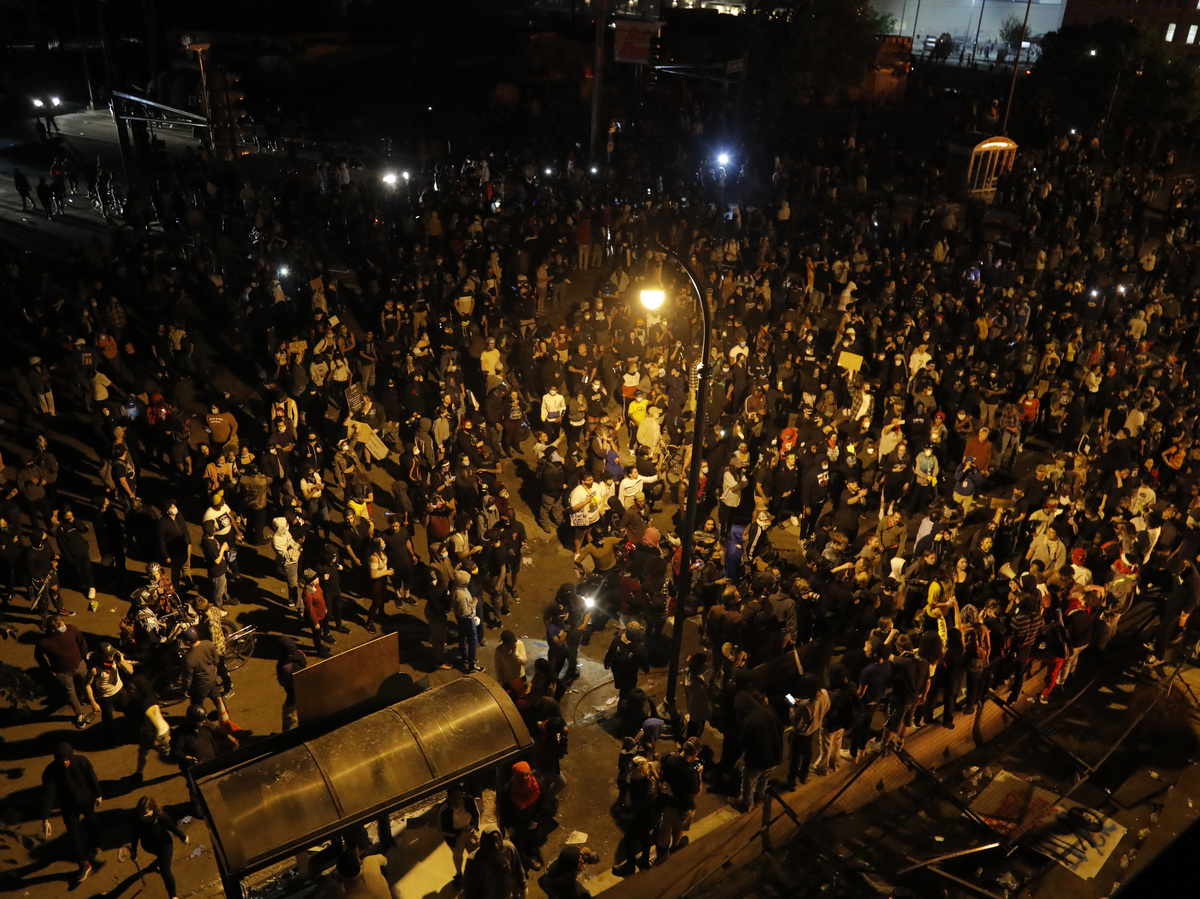 Earlier Thursday night, a crowd of protesters is seen from the roof of the 3rd Precinct in Minneapolis. The building, which was abandoned by officers, was later stormed and set on fire.

On Friday morning, state police arrested a CNN crew while it was reporting about the unrest on live television: "A black reporter from CNN was arrested while legally covering the protests in Minneapolis," the network pointedly noted. "A white reporter also on the ground was not."

The crew of correspondent Omar Jimenez, producer Bill Kirkos and photojournalist Leonel Mendez was released about an hour later, and Walz repeatedly apologized during his news conference Friday.

"A few minutes after hearing [about the arrest] I was on a call with CNN President Jeff Zucker, who demanded to know what happened. I take full responsibility," Walz said Friday.

"There is absolutely no reason something like this should happen. Calls were made immediately. This is a very public apology to that team. It should not happen."

The swift backtrack did little to soften the shock of the spectacle, though.

"With all the perversions of American democracy that we have witnessed, few rival the dystopian spectacle of a U.S. journalist calmly reporting the news and repeatedly offering to reposition his crew at the police's request, only to be arrested, cuffed and hauled away alongside his crew," said Suzanne Nossel, CEO of PEN America, advocacy group that fights for press freedom.

She added: "For us at PEN America, where we routinely document the arrest and imprisonment of writers and journalists worldwide, the action was eerily familiar, but something we expect to see in authoritarian states: Turkey, Hong Kong, Egypt. To see it in the United States of America is appalling." 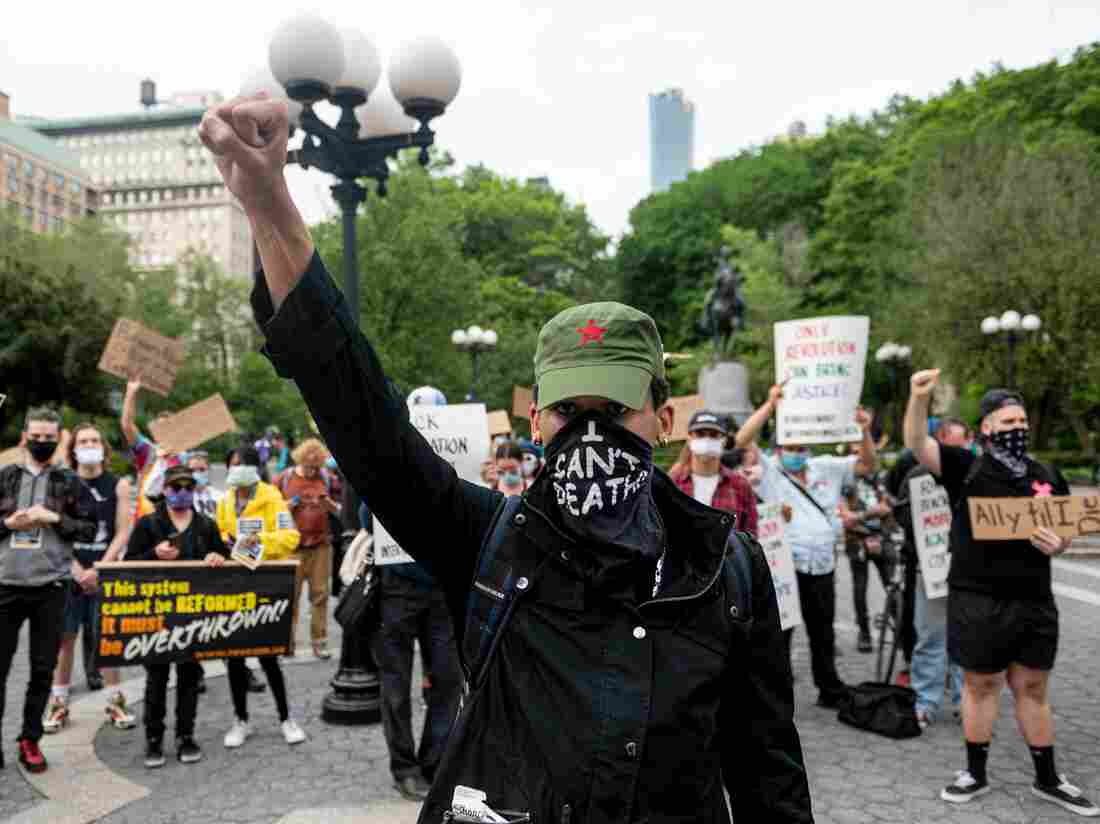 A protester raises a fist during a "Black Lives Matter" demonstration Thursday in New York City — just one of a number of protests nationwide inspired by Floyd's death in Minneapolis. Johannes Eisele/AFP via Getty Images hide caption 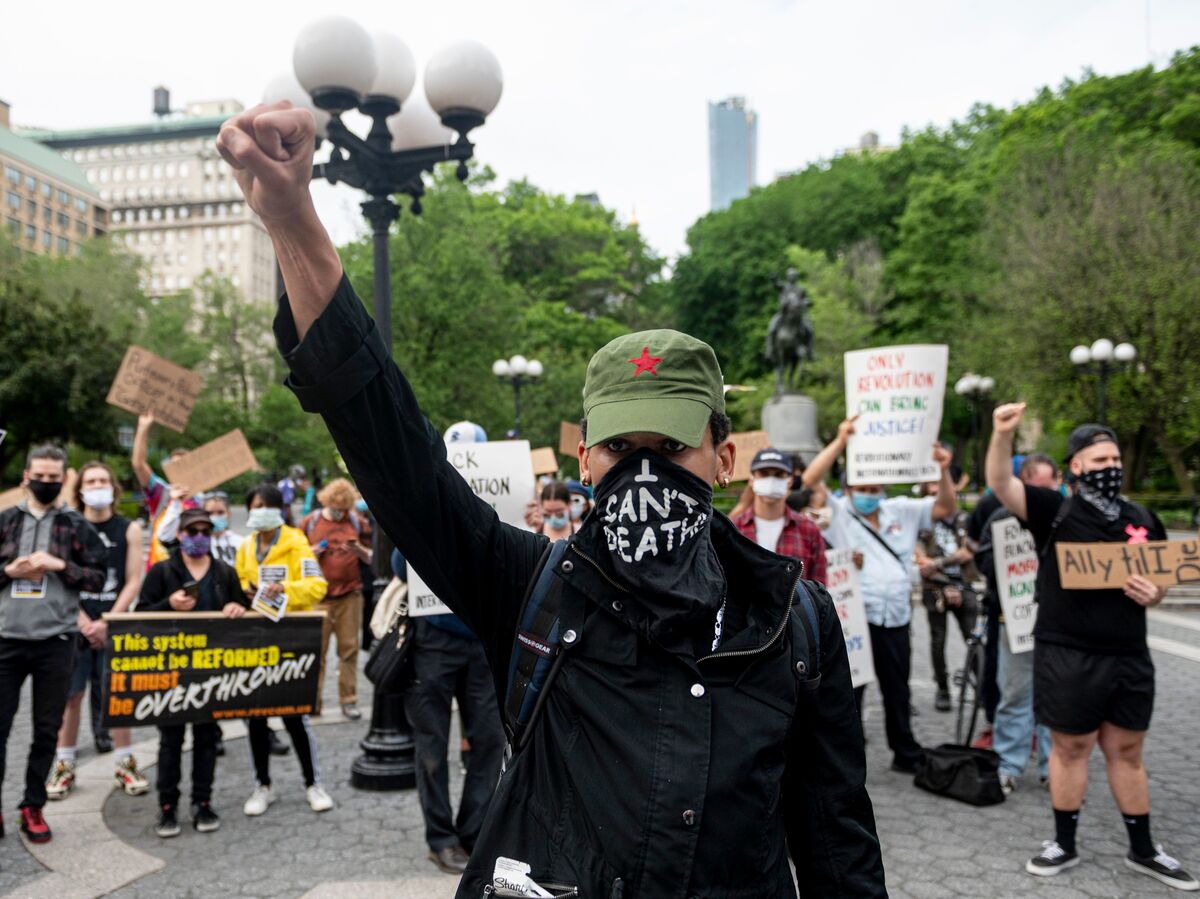 A protester raises a fist during a "Black Lives Matter" demonstration Thursday in New York City — just one of a number of protests nationwide inspired by Floyd's death in Minneapolis.

Obama and others nationwide respond to Floyd's death

Demonstrators in Minneapolis are not alone in their outrage over Floyd's death.

Activists spilled onto city streets across the country, holding protests seeking justice for the Minneapolis man as well as other unarmed black men and women who have died at the hands of law enforcement officers or in police custody.

Large protests were held outside the White House and outside the CNN headquarters in Atlanta, as well as in cities including New York, Houston and San Jose, Calif.

Among those who took to social media to express their pain and frustration Friday was former President Barack Obama.

"It's natural to wish for life 'to just get back to normal' as a pandemic and economic crisis upend everything around us. But we have to remember that for millions of Americans, being treated differently on account of race is tragically, painfully, maddeningly 'normal' – whether it's while dealing with the health care system, or interacting with the criminal justice system, or jogging down the street, or just watching birds in a park," Obama said in a statement posted to social media.

In speaking of jogging and bird-watching, the former president referred to two other videos that have inspired outrage this month — one in which a black man was followed and killed by two white men while out for a run in Georgia, and another in which a white woman called police on a black bird-watcher in New York City after he asked her to leash her dog.

"This shouldn't be 'normal' in 2020 America. It can't be 'normal,' " Obama said. "If we want our children to grow up in a nation that lives up to its highest ideals, we can and must be better."

My statement on the death of George Floyd: pic.twitter.com/Hg1k9JHT6R

Protesters have turned out to express their outrage as far as Los Angeles and New York City. Meanwhile in Louisville, Ky., demonstrators gathered Thursday to protest death of Breonna Taylor, a black woman shot by police during a no-knock raid on her home in March. Those protests turned violent, as well, with several people reported shot amid the melee.

As one protester in Minneapolis told NPR, the anger over Floyd's death is about more than just one man — it's about how police treat black people across the U.S.

"This is how our people react, you know? When we've been done wrong for so long," he said. "So, me, I'm just praying and hoping everybody makes it home safe."