Accessibility links
2 Dead As More U.S. Cities See Protests After George Floyd's Death Americans continued to express their grief and outrage in demonstrations across the country, with violence emerging in some cities. 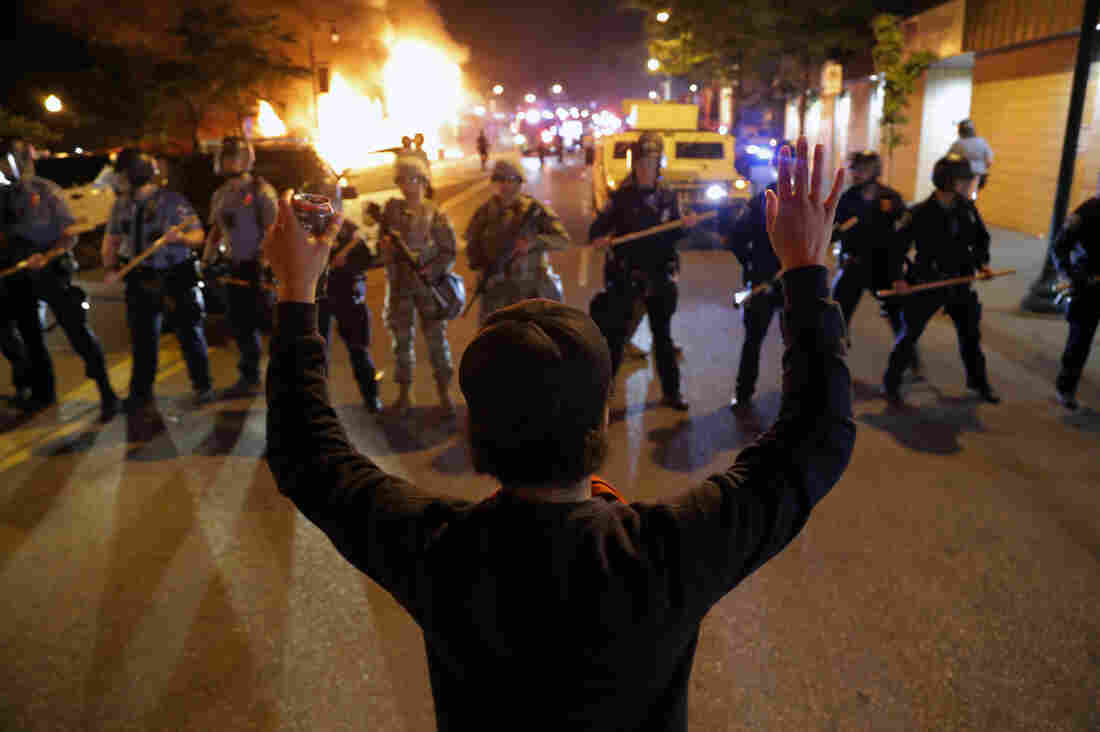 A man raises his hands as police line up across the street during protests Friday in Minneapolis. Demonstrators expressed outrage and grief across the nation over the death of George Floyd, a black man who was killed by police. Julio Cortez/AP hide caption 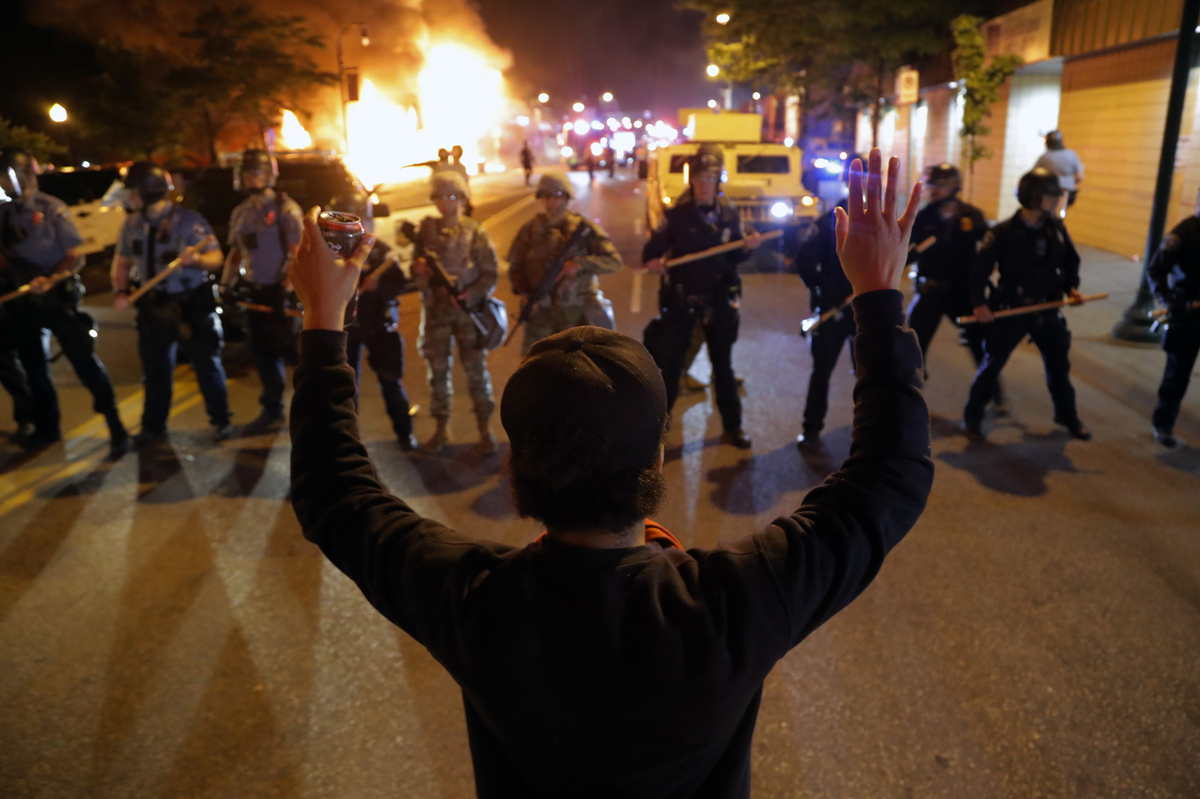 A man raises his hands as police line up across the street during protests Friday in Minneapolis. Demonstrators expressed outrage and grief across the nation over the death of George Floyd, a black man who was killed by police.

Angry protests nationwide on Friday followed the death of George Floyd in police custody in Minneapolis. Clashes erupted between activists and law enforcement in many locations, and at least two people were dead by Saturday morning.

Demonstrators nationwide have taken to the streets after Floyd died while being arrested in Minneapolis. A video shows a police officer kneeling on his neck for at least seven minutes; Floyd is heard begging for the police to stop and saying he cannot breathe. That police officer has been arrested and charged with third-degree murder and manslaughter. Three other officers were present but have not been charged. All four were fired earlier in the week.

One person was killed in Detroit as hundreds of people gathered in the city's downtown area as part of the nationwide protests.

As WXYZ TV, an ABC News affiliate, reported, a Detroit Police Department spokesperson said, "A grey Dodge Durango pulled up and fired into the crowd, striking a 19-year-old man." The shooting did not involve police.

Protesters were allowed to march in the streets until shortly before midnight when officers, outfitted in riot gear, began firing tear gas into the crowds, according to the news station.

Officials said at least nine people were arrested after the demonstrations were pronounced to be unlawful gatherings.

In Oakland, Calif., a contract security officer for the Federal Protective Service was killed and another injured in a shooting at the Ronald V. Dellums Federal Building on Friday night, according to a statement from the FBI. The service is part of the Department of Homeland Security.

The officers were shot after a vehicle approached the building, and "an individual inside the vehicle began firing." Authorities have not linked the shooting with the protests, though the incident is under a joint investigation by the Oakland Police Department and local FBI office.

In Minneapolis, after a night of rioting, looting and setting a number of businesses ablaze on Thursday, the situation seemed calmer early Friday.

Officials there appeared to take a nonconfrontational approach to people marching through the city for much of the day, despite some instances of civil disorder. But as the hours passed and protesters ignored a citywide 8 p.m. curfew, law enforcement reversed course.

The new strategy included deploying a column of National Guard troops, including armored vehicles, to respond to protests near the 5th Precinct. People had set fire to the 3rd Precinct on Thursday night, forcing police to abandon the building.

On Friday night, protesters also reportedly were seen breaking into a Wells Fargo Bank, which was also torched.

Walz said he understood the rage felt across the nation but condemned what he called "wanton destruction."

"This is not grieving," he said. "This is not making a statement. This is life-threatening and dangerous to the most well-qualified forces out there."

Frey said he was "reeling" along with the rest of his city over Floyd's death but emphasized that "there is no honor in burning down your city." He pointed out that local businesses and institutions that many citizens depend on amid the coronavirus pandemic that had been destroyed.

Major Gen. Jon Jensen announced the state's National Guard was preparing to deploy 1,700 soldiers. The action would be the largest deployment within Minnesota in the state's history.

"They are telling our stories, and you are disgracing their building"

In other cities, most of the demonstrations began peacefully, but as the day unfolded and night fell, they became increasingly violent.

That was true in Atlanta, where a crowd of protesters outside of an entrance to CNN's headquarters on Friday evening repeatedly threw rocks at officers attempting to keep them from rushing into the building. 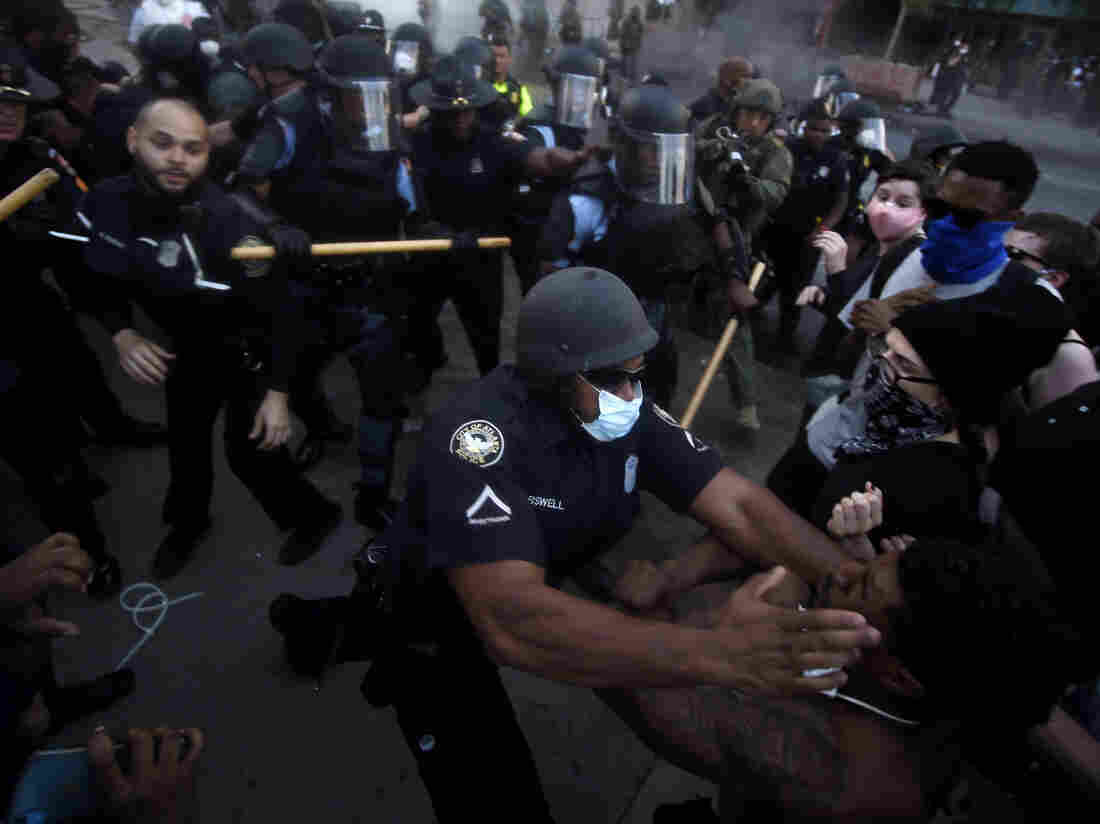 Police officers and protesters clash on Friday near CNN Center in Atlanta, in response to George Floyd's death in police custody in Minneapolis on Memorial Day. Mike Stewart/AP hide caption 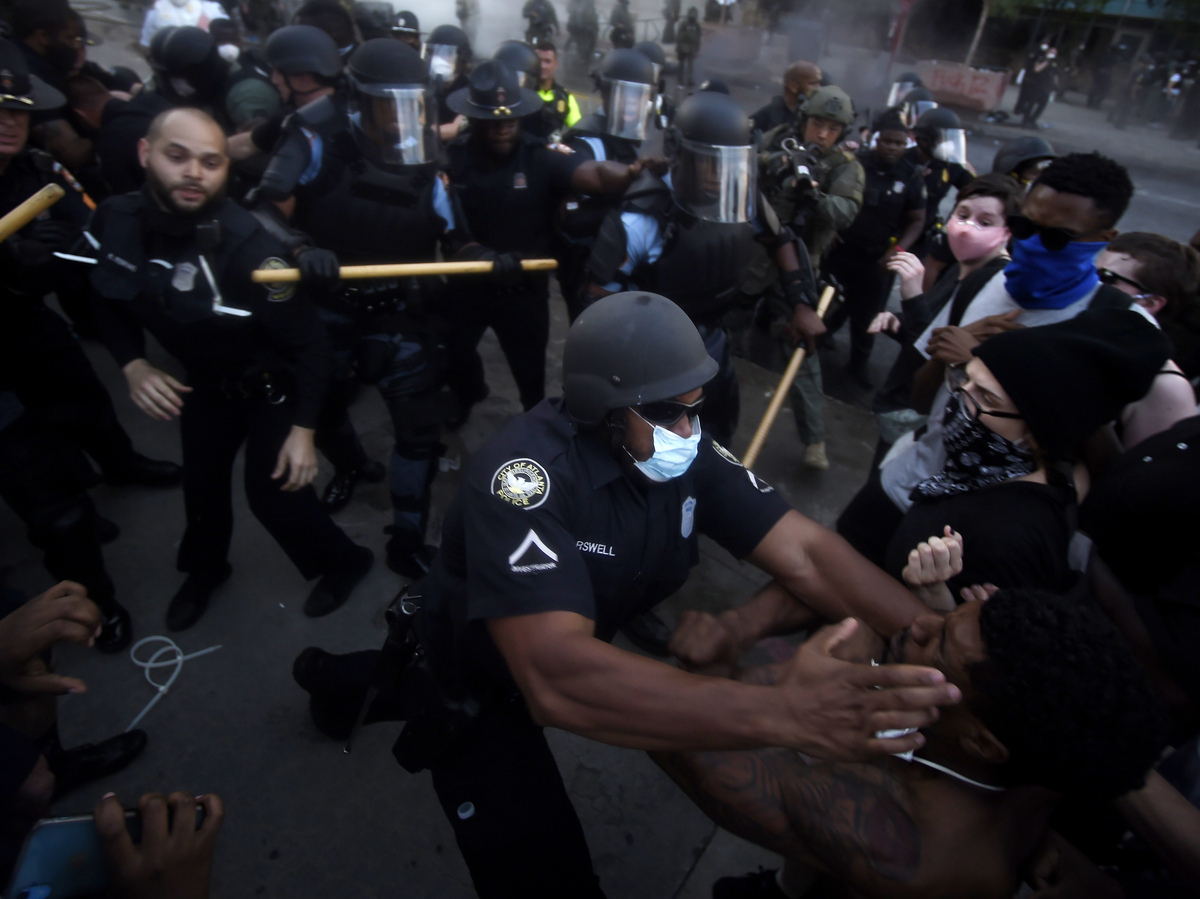 Police officers and protesters clash on Friday near CNN Center in Atlanta, in response to George Floyd's death in police custody in Minneapolis on Memorial Day.

Armed with riot gear, more than a dozen officers braced as they endured attacks from protesters with rocks, smoke grenades, and apparently BB rounds. At one point, protesters threw a flashbang that detonated in a small lobby.

In response, Georgia Gov. Brian Kemp issued a state of emergency around midnight.

"At the request of Mayor [Keisha Lance Bottoms] & in consultation with public safety & emergency preparedness officials, I have issued a State of Emergency for Fulton County to activate as many as 500 [Georgia National Guard] troops to protect people & property in Atlanta," Kemp announced in a tweet.

.@CNNValencia and crew take cover after an explosion takes place in the space between protesters and police at the CNN Center in Atlanta. https://t.co/mHZFrcOZj7 pic.twitter.com/HLPzyoKgn9

Earlier in the day, a police vehicle was set on fire — an act of vandalism reporters have cited as a turning point in the day's activities.

Bottoms pleaded with those marching in the streets to stop rioting.

"You are burning cars, you have defaced the CNN building. Ted Turner started CNN in Atlanta 40 years ago because he believed in who we are as a city. ... They are telling our stories, and you are disgracing their building," Bottoms said in a televised interview.

Others who had surrounded CNN's headquarters, smashed the building's windows and sprayed graffiti on the network's logo.

The messages scrawled on the building included insults to President Trump, along with #Love and "no cops."

Members of the crowd marched to the Multnomah County Justice Center, which houses the county jail and police headquarters. Video showed several protesters breaking windows. The police department said a small fire was lit in the building.

The Portland Police Bureau later declared a riot in the city and ordered protesters to go home. In a tweet, it said people who did not comply would be "subject to gas, projectiles, and other means necessary for dispersal."

PPB has declared a riot. The following is closed to all traffic, pedestrians and vehicles: SW Naito Pkwy west to SW 13th Ave is closed from SW Lincoln north to NW Everett St. Disperse now or you will be subject to gas, projectiles, and other means necessary for dispersal.

"Portland, this is NOT us," he wrote. "When you destroy our city, you are destroying our community. When you act in violence against each other, you are hurting all of us. How does this honor the legacy of George Floyd? Protest, speak truth, but don't tear your city apart in the process."

As the demonstrations grew more violent, Wheeler took to Twitter again, announcing that he would be returning to the city to speak to police. Wheeler wrote that he had to leave the city to be at the side of his dying mother.

I had to leave Portland today because my mother is dying. I am with family to prepare for her final moments. This is hard, this is personal, but so is watching my city get destroyed.

I’m coming back NOW. You will be hearing from me, @PortlandPolice, community leaders.

In Los Angeles, an angry crowd rushed into the streets amid oncoming traffic.

At one point, an officer grabbed a male activist in an attempt to restrain him. After a brief tussle, a throng of protesters pulled the officer to the ground. They descended on the uniformed officer, kicking and hitting him with protest signs. Eventually, a man in civilian clothing pulled the officer out of the melee.

Dozens of people later marched onto the 110 Freeway blocking all of the northbound lanes.

But as the sun set, some protesters became more destructive.

One group busted the windows of a downtown Starbucks and other local restaurants. Others set trash cans on fire and pushed dumpsters toward lines of police officers.

At about 10:30 p.m. local time, the police department declared an unlawful assembly throughout the core downtown area.

"This is being made following repeated acts of violence & property damage," officials said on Twitter.

We have declared an unlawful assembly throughout Downtown LA.
From the 10 Fwy to the 101 & the 110 Fwy to Alameda—This is being made following repeated acts of violence & property damage. Residents should stay inside—Business should close—Those on the street are to leave the area

On Friday afternoon, the U.S. Secret Service temporarily locked down the White House after demonstrators gathered in protest outside the gates. Many took a knee while others chanted, "Don't Shoot."

Shortly afterward, Secret Service officials said "personnel are currently assisting other law enforcement agencies during a demonstration" in the park across from the White House. Law enforcement struggled with protesters over metal barricades that form one of the layers of protection around the White House.

Protesters remained at the White House early Saturday morning, shoving police as they stood outside with shields. At one point, police appeared to attempt to disperse the crowd by using tear gas or pepper spray.

More protests broke out in New York, also peacefully at first, in lower Manhattan area and then with spurts of violence at the Barclays Center in Brooklyn. Protesters threw water bottles and chanted insults at police.

In a video captured by a local reporter, police can be seen wielding batons and beating several protesters to the ground, and at one point spraying a crowd with a repellent, and making arrests.

"Our police officers have been given a very clear instruction: As always, respect peaceful protest. We in this city have a long history of respecting every kind of viewpoint, that is the essence of New York City," Mayor Bill de Blasio said in a press conference Friday.

The Associated Press reports in Brooklyn, at least one New York Police Department van was set on fire by demonstrators twice.

At least 200 demonstrators were arrested Friday and a dozen NYPD officers injured, according to local reports. Seventy protesters were taken into custody on Thursday.

In Denver, windows were smashed, fires burned late into the night

Demonstrators in Denver gathered peacefully at noon Friday, for the second day in a row, at the state Capitol and downtown, according to local reports. Protesters chanted, "Say his name — George Floyd," and other slogans but eventually struggles broke out with police.

Protesters defaced a statue on the Capitol steps, and spray-painted "I can't breathe" and other graffiti on pillars. On the video, Floyd can be heard pleading for his life and saying he couldn't breathe.

Tay Anderson, a Denver school board member and community organizer, said in a tweet that those who took part in violence Friday were asked to stop by protest organizers.

We asked white allies to go home and some of them still insisted throwing rocks, bottles, etc. at police.

The police responded with gas and rubber bullets. I am disgusted in how allies ignored our asks to go home and stay peaceful.

This is a developing story. Some things reported by the media will turn out to be wrong. We will focus on reports from officials and other authorities, credible news outlets and reporters who are at the scene. We will update as the situation develops.