Accessibility links
Democratic And Republican Presidents Supported The NASA-SpaceX Partnership The successful SpaceX launch has its roots in two previous administrations, but President Trump credited his own leadership. 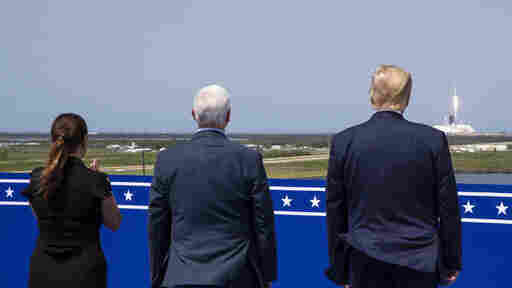 Shortly after NASA astronauts blasted off from U.S. soil for the first time since 2011, President Trump painted a dire picture of what the space agency had looked like when he first came to office.

"There was grass growing through the cracks of your concrete runways — not a pretty sight, not a pretty sight at all," he said at NASA's enormous Vehicle Assembly Building at Kennedy Space Center in Florida, where he had come to watch two astronauts launch to orbit in a vehicle owned and operated by SpaceX.

"With this launch, the decades of lost years and little action are officially over," he said. "Past leaders put the United States at the mercy of foreign nations to send our astronauts into orbit — not anymore. Today we once again proudly launch American astronauts on American rockets — the best in the world — from right here on American soil."

NASA And SpaceX Launch First Astronauts To Orbit From U.S. Since 2011

Actually, it was two past presidents who put NASA on the path to this SpaceX launch, though it would be hard to know that from listening to the post-launch speeches.

"Today is the culmination of three and a half years of renewed leadership in space," said Vice President Pence, who called the launch "a tribute to the vision and leadership of a president who, from the very first days of this administration, was determined to revive NASA and American leadership in human space exploration."

The groundwork for sending NASA astronauts up on a commercial space vehicle, however, goes back more than a decade. It proceeded steadily under both Republican and Democratic administrations.

"This is a program that demonstrates the success when you have continuity of purpose going from one administration to the next," said NASA Administrator Jim Bridenstine in a recent preflight briefing.

In 2006, under President George W. Bush, the space agency started a program to get commercial companies to begin delivering cargo to the International Space Station.

The idea was to save money for taxpayers by having NASA buy delivery services rather than own and operate its own cargo ships. This would also provide a financial incentive for the private sector to develop new spacecraft that could be used both by NASA and by other paying customers.

The plan worked. In 2012, an unoccupied robotic SpaceX capsule successfully docked with the International Space Station — a first for a commercially owned and operated spaceship.

Having companies take astronauts to the outpost was a natural extension of this cargo program. NASA announced its commercial crew program in 2010, under President Barack Obama.

In 2014, NASA selected SpaceX and Boeing to transport its astronauts, awarding them contracts worth $6.8 billion. A year later, the agency named the four astronauts who would eventually fly in these spaceships — including Robert Behnken and Douglas Hurley, the two crew members assigned to the SpaceX test flight that launched on Saturday.

The shift to commercial crew-transportation services in 2010, coming just as the agency's 30-year-old space shuttle program was winding down, marked a real change for NASA. Many were skeptical, especially in Congress. Bridenstine credits former NASA Administrator Charles Bolden, who served under Obama, for his efforts to make it happen.

"Charlie Bolden did just yeoman's work in order to get this program off the ground, to get it going, and here we are all these years later, having this success," said Bridenstine in that preflight briefing.

The space program has historically united people across political divides, he noted, adding that the same will be true for this unprecedented SpaceX launch.

"It's not just going to unite Republicans and Democrats — it's going to unite the world. The whole world is going to be watching this particular launch, and all of our international partners are very interested," said Bridenstine.

He also, however, gave credit to his boss. "President Trump has been a massive space advocate. He promised to launch American astronauts on American rockets. He promised to create a moon program," said Bridenstine. "He's done both of those, and he's backed it up with his budget requests, not just with the words."

But when Bridenstine recently tweeted that "Under President Trump's leadership, we are once again launching American astronauts on American rockets from American soil," one astronaut took issue with that statement, pointing out that the commercial crew program had started in 2010, years before Trump was elected.

"I am thankful for the continued support from you and the Administration but if there is a President to thank for this milestone, it's @BarackObama," tweeted Garrett Reisman, a former NASA astronaut who spent years working for SpaceX and has served as a consultant for the company.

The moon effort was being spearheaded by Douglas Loverro, the head of human spaceflight at NASA. But last week, he was forced to resign because of what he said was a mistake he had made this year in an effort to fulfill the mission.