Accessibility links
'I Find Myself Very Seriously Feeling Hollow': Documenting A Pandemic Experience As the coronavirus sweeps the nation, 85-year-old Margaret Sullivan watches and records the changes from inside her retirement home in Virginia. 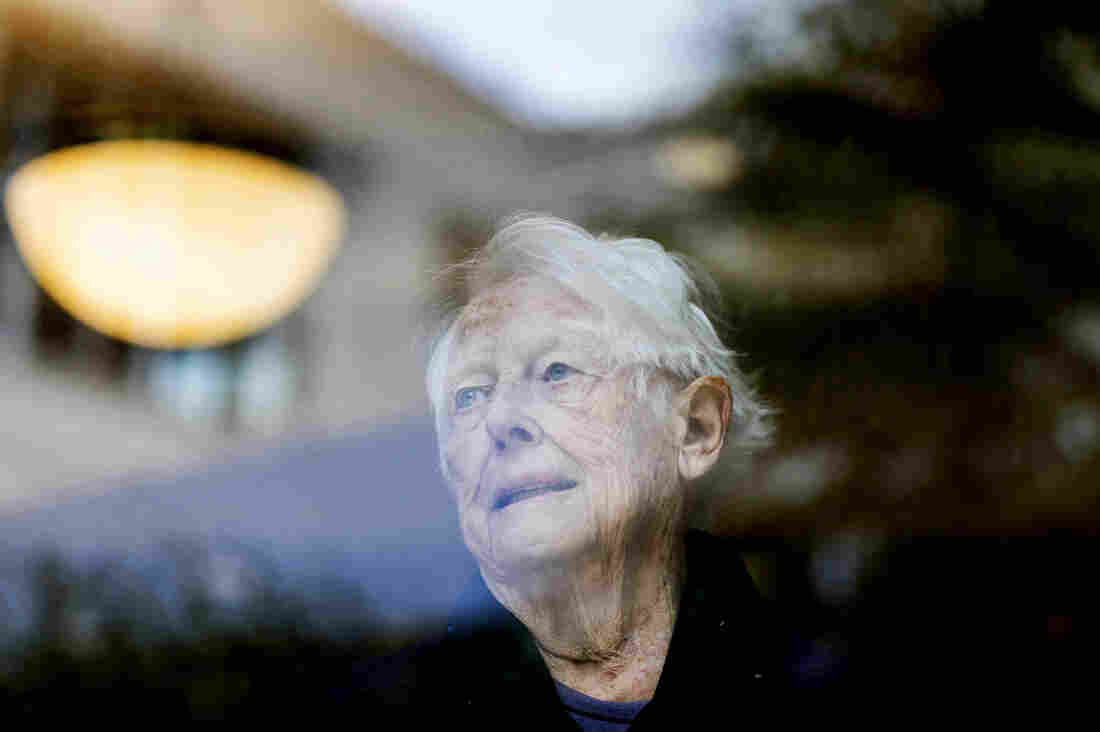 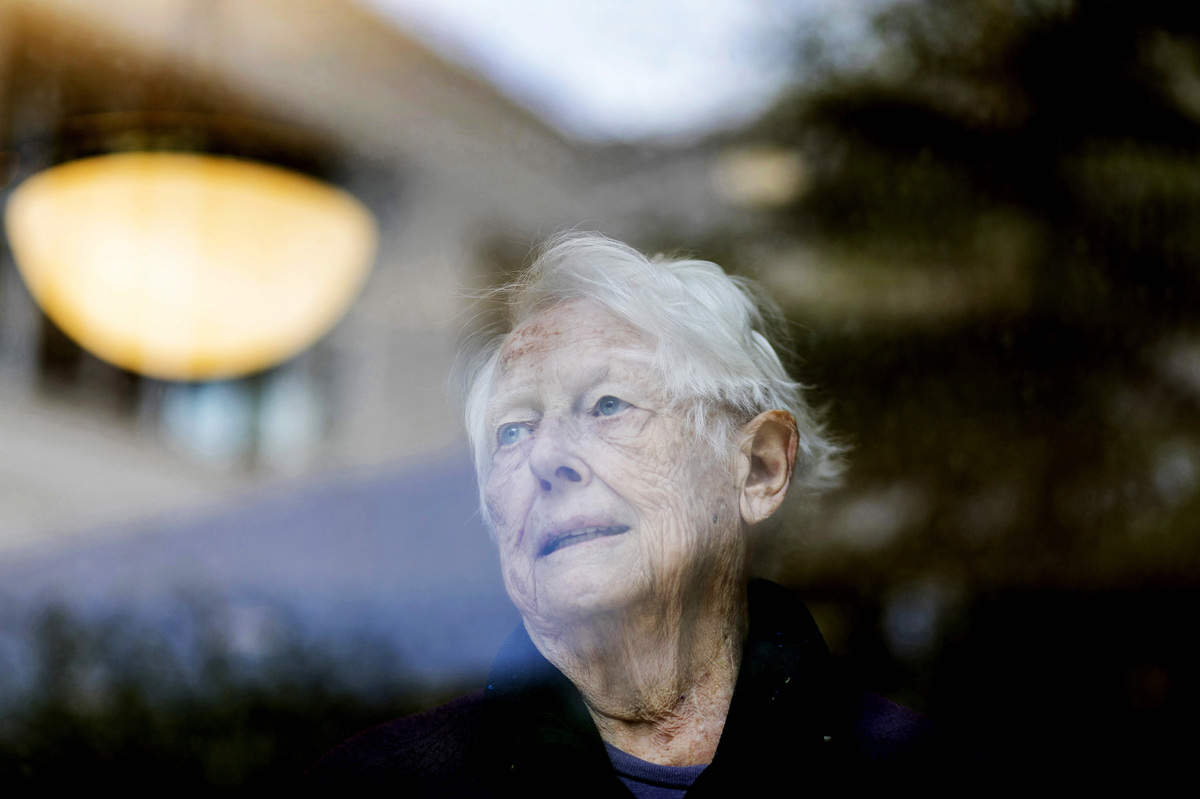 Margaret Sullivan looks out the windows of Goodwin House in Falls Church, Va.

At 85, Margaret Sullivan felt that she had a comfortable life and was being well taken care of in a retirement home in Northern Virginia.

"Living in a bubble," she said.

But then she shared a piece of sad news: "My brother died about two weeks ago of the virus."

He lived a few states away.

"I'm the oldest and he's the youngest," she explained. "And that's outside the order of things."

For many, the pandemic has been long days of juggling kids and work. Worrying about money. Trying to schedule grocery deliveries.

But for Sullivan, the virus brings with it thoughts of mortality.

The octogenerian lives at Goodwin House in Bailey's Crossroads, Va., and has been documenting all the ways the coronavirus pandemic has shut down life around her.

The first glimpse of things to come was on Feb. 28.

Left: A staff member has her temperature taken upon arrival at the Goodwin House in Bailey's Crossroads, Va. on March 16. Right: Reminders about safety protocols on April 1. Margaret Sullivan hide caption

A few days later, salt and pepper shakers disappeared from dining rooms, "in an abundance of caution."

Residents were not to leave, and no outsiders could come in — which meant, no more visits from her daughter, who lives five miles away.

"We are being extraordinarily well taken care of, but we are also being carefully harbored," Sullivan said during a phone call on April 2.

As many as 1 in 4 people age 85 and older who are infected with the virus die, according to early research.

She and her husband had recently updated their will, fixing married names of their children.

"You need to be sure that the documents that the kids would need to have are in order," she said, a few minutes before ending the call. "And so we're going downstairs to find the notary."

"This is something I've seen"

Sullivan describes herself as a rolling stone. She was born in China, and her father was a doctor of public health in parasitology. When the rumblings of World War II began, 6-year-old Sullivan moved back to the U.S. with her family. Later, when she was in high school, the family moved to Burma (now Myanmar), then India, where she graduated from high school. She ended up in Washington, D.C., for college. And then she got married.

Sullivan says this life, hopping from country-to-country in Asia and Africa with four kids in tow, put her in the path of a number of epidemics. In the 1970s, the family was living in Sierra Leone while the Lassa Fever was raging there. The Centers for Disease Control and Prevention sent a team to collect blood samples of sick people — and those infected samples were stored in Sullivan's refrigerator.

"Until the next plane came through and they went back to Atlanta," she said.

Then there was the time they were living in Nigeria: "All three of the kids got mumps the day I was supposed to host a big party. I mean, everybody has these stories."

A long life, much of it lived abroad, gives Sullivan perspective on the current pandemic, of both perspective of time, and geography.

"Life turned on its head"

Sullivan is a writer, and has written books about her globetrotting life. Now, she's writing about — and recording — her life under lockdown.

Left: Margaret's husband, Dan, with a takeaway meal on April 6. Right: The masked couple inspecting menus on April 21; meals must be ordered two days in advance, and are now delivered to each resident, to limit contact. Margaret Sullivan hide caption

Left: Margaret's husband, Dan, with a takeaway meal on April 6. Right: The masked couple inspecting menus on April 21; meals must be ordered two days in advance, and are now delivered to each resident, to limit contact.

Weeks earlier, the dining rooms at Goodwin House had converted to takeaway service only, with residents waiting 6 feet apart to pick up food. Now, the letter said, meals would be delivered and left outside each resident's door.

In the recording, there's a knock.

"And there comes my lunch. Just a minute," Sullivan said, putting down the recorder with a clunk. She catches up with the staff member who delivered the meal. "Well, it's more fun when we can go downstairs and pick it up and chat with you."

In another recording, she's interrupted by her husband, Dan.

"You came back to get your mask? OK. Here it is," she said, as he puttered in the background. "Dan, it needs to go over your nose."

The Sullivans have been married for 65 years. He's 91, and has mid-stage Alzheimer's. As the patterns of daily life change during the pandemic, Dan's confusion increases. There are many more conversations about where everyday objects are than there were just a few weeks ago.

"He's good about picking up and taking things to the sink," Sullivan said. "I may have to remind him that the sink is where the sink is."

Sullivan jokes about the situation, and she keeps busy — scheduling Zoom calls with her kids and grandkids. But lately, there's a sense of gravity settling in.

"I find myself very seriously feeling hollow. It just sort of — there's a bog and I'm caught in it," she says in a recording from April 18.

There's also the day — April 8 — when Sullivan ends her recording this way: "Today's my brother's birthday, and he isn't here for me to call. And so my heart breaks a bit on that, too." 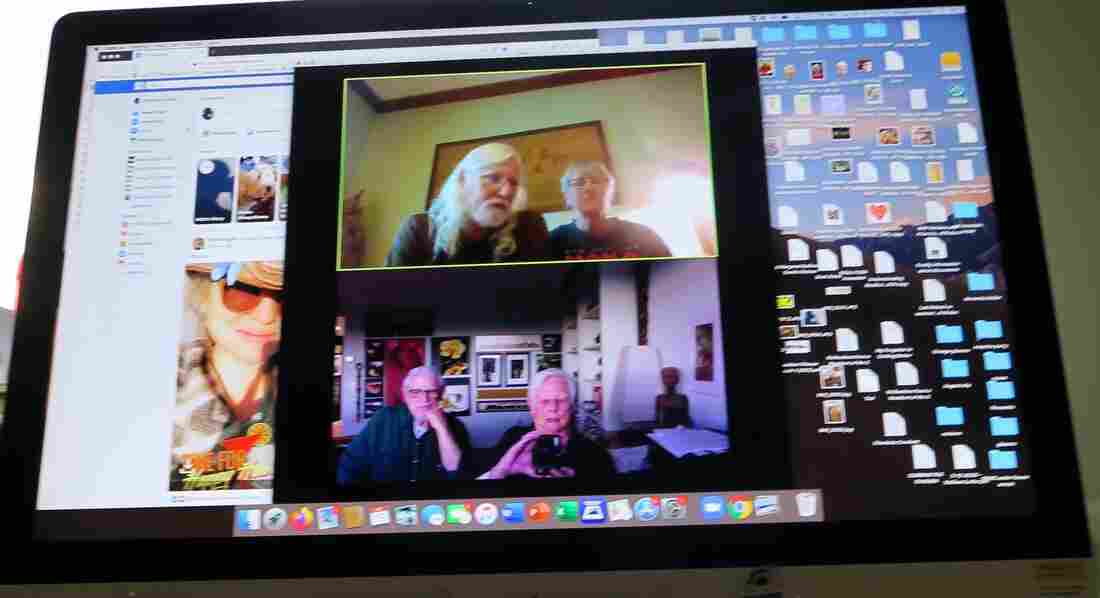 "Zooming on Sunday night with number one son, Jerry (who is a professor of anthropology at Collin Collage in Texas) and his wife Phillipa who live in McKenney, Texas," writes Margaret. "We are talking with each of our four kids (adult children) this way. And having drinks with friends sometimes." Margaret Sullivan hide caption 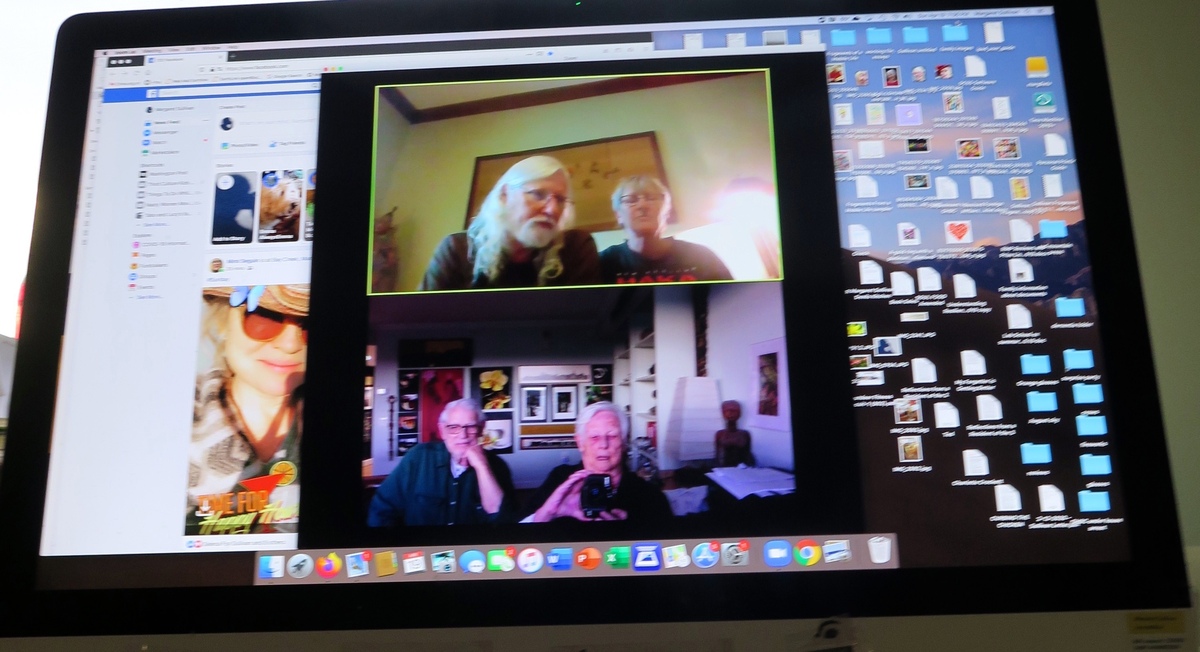 "Zooming on Sunday night with number one son, Jerry (who is a professor of anthropology at Collin Collage in Texas) and his wife Phillipa who live in McKenney, Texas," writes Margaret. "We are talking with each of our four kids (adult children) this way. And having drinks with friends sometimes."

She reads the news each morning — the papers are being delivered by a cadre of volunteers in the building — and struggles to find the right word, as nursing homes around the country are overtaken by deaths from COVID-19.

"I won't say that life is terrifying," she said. "I haven't quite found the right word for what it is. But it certainly is concerning."

Now that she and Dan have updated their will, they're working on a living will.

"I had never thought that I would want to write down 'Do not ventilate,'" Sullivan said. "There are other people who need them more, and I have had a good life. And so I think that's what we'll do."

In late April, the retirement home where Sullivan lives had its first confirmed case of the coronavirus. All the residents had to get tested.

"The swab goes up your nose. It doesn't hurt very much," Sullivan said. "Everybody sort of held their breath a bit 'til you get the results."

Sullivan says nine people tested positive, and two of them died. It made her very aware, she said, of the world of risk she lives in.

Then, last weekend, the Sunday New York Times came — the edition marking 100,000 deaths in the United States. The front page is nothing but names of the dead — six columns in small print.

"We brought it in and as we always do, there was coffee and the paper," she said. "I knew he had to be there."

She found her brother's name halfway down the first column. Like each name, it was followed by a tiny obituary — a whole life condensed into four words.

"For Ted, they said that he 'could make anything grow.' And he could," Sullivan said.

She wasn't able to be with her brother when he died and has no idea if or when the family will be able to get together to cry, and tell stories about him. Instead it's all online. Sullivan folded the newspaper, circled Ted's name in red ink, took a photo, and posted it on Facebook.