Accessibility links
'Child Of The Universe' Helps Kids Find Their Place In The Cosmos Before he became an astrophysicist, Ray Jayawardhana was just a kid, looking up at the night sky with his father. "I remember being awed," he says. He's written a book called Child of the Universe.

Astrophysicist Ray Jayawardhana remembers looking up at the night sky with his own father. His new book Child of the Universe is a bedtime story about a child understanding her place in the cosmos. Raul Colón/Random House Children's Books hide caption

Imagining your place in the universe can make you feel pretty small and insignificant, and in the midst of a global pandemic? Well, even more so.

"I think this moment that we are living through reminds us how fragile our species is, living on this small rock in the vastness of the cosmos," says astrophysicist Ray Jayawardhana. But he doesn't think that the universe should necessarily make you feel alone. It's inspiring, he says, to remember the "intimate and enduring connections that we have with the rest of the cosmos."

Jayawardhana, a professor at Cornell University, has written a bedtime story called Child of the Universe which helps parents talk with their children about some of those connections. 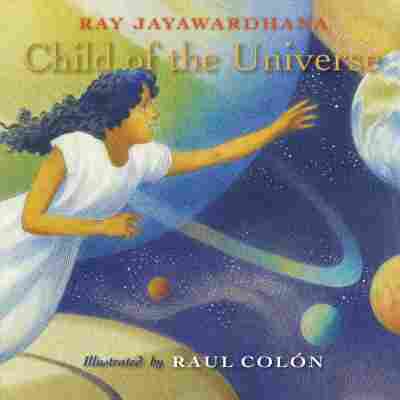 Child of the Universe

by Ray Jayawardhana and Raul Colón

"The universe conspired to make you ..." a dad tells his daughter as they look up at a full moon. "The iron in your blood, the calcium in your bones, are made up of stars that lived long ago."

Jayawardhana drew from memories of looking up at the night sky with his father, when he was a child growing up in Sri Lanka. "I remember being awed by constellations of twinkling stars and bright planets like Venus and Jupiter in particular" Jayawardhana says. "One night, my father told me that people had been to the moon. I was just amazed. Suddenly, that bright light up above became a place that one could visit. At that moment, my sense of what's possible expanded dramatically."

Child of the Universe is illustrated by Raúl Colón, who draws the little girl swimming through the swirling colors of space.

"I didn't just want illustrations that showed planets, or stars ... I wanted to make it a dynamic thing," he explains. "So you'll see the little girl floating in space. You'll see her almost traveling amongst the planets."

Colón says the images came to him quickly – and growing up in the '60s didn't hurt either.

"I was a big fan of Stanley Kubrick," he says. "I saw 2001 A Space Odyssey, which influenced me a lot, and the way I visualized things. That's the kind of look I wanted for the book."

"The iron in your blood, the calcium in your bones, are made up of stars that lived long ago." Raul Colón/Random House Children's Books hide caption

Jayawardhana was pleased with the way Colón captured the experience of the child in the story — feeling at home in the universe, and at the same time, embodying it. "It's really capturing both strands of what I was trying to convey," Jayawardhana says. "That we are intimately connected to the universe — and the other aspect of feeling a sense of grand possibility for oneself as a kid."

This is a particularly powerful message to hear in the midst of stay-at-home orders and quarantine.

"We're locked in here, but there's still beauty out there," Colón says. "People forget how poetic and beautiful the universe is just on its own. I think in this time when we're sitting around, we should be able to do that: Think about the universe and the beauty of it. ... Right now is a time to reflect."

"Of starbursts brighter than fireworks, you are a child of the universe." Raul Colón/Random House Children's Books hide caption

"Of starbursts brighter than fireworks, you are a child of the universe."

Melissa Gray edited this interview for broadcast. Beth Novey adapted it for the Web.