Accessibility links
Review: 'Something To Talk About,' By Meryl Wilsner In Meryl Wilsner's debut novel, a Hollywood showrunner and her assistant are thrust into the spotlight after an innocuous red-carpet moment prompts gossip about a relationship between the two women. 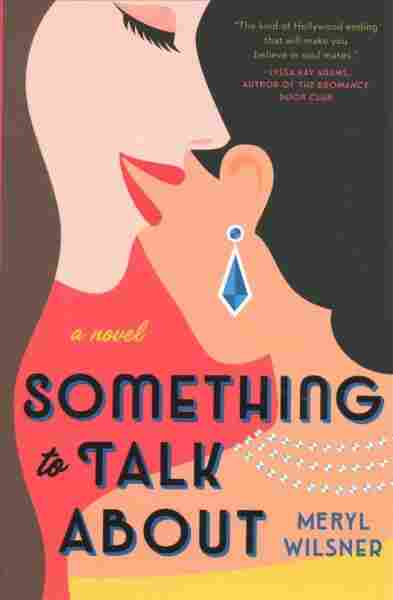 Something to Talk About

Title
Something to Talk About
Author
Meryl Wilsner

A picture is worth a thousand words in Meryl Wilsner's debut novel, Something to Talk About.

A queer romance set in Hollywood, Something to Talk About aims its spotlight at love in the workplace in a story that draws much of its plot from newspaper headlines (and the tabloids).

Jo Jones is a 42-year-old former child TV star turned award-winning actress, turned award-winning showrunner of a successful dramatic TV series — with all the success, wealth, and notoriety that entails. And she's constructed a nearly impenetrable wall to protect herself from the drawbacks of fame, in particular, the relentless scrutiny of Hollywood gossip.

Emma is Jo's assistant. A conscientious, hard-working, 27-year-old, she knows her purpose when it comes to Jo — protect her boss's schedule and privacy. Although she's undecided about her career goals, Emma takes pride in her work and in her boss, whom she admires greatly. There's also a chance Emma might have a crush on Jo, but she's adamant about keeping that fact to herself.

The novel begins as any proper Hollywood tale should: with a glamorous awards show. Jo is up for a Screen Actors Guild Award, and the ceremony is taking place the same week she's set to announce her new gig as the executive producer and writer for a mega-action movie franchise. But media questions her ability to handle the new job — after all, she's not only a woman, she's Chinese American, so how could she possibly handle an action movie? Emma takes these aspersions against her boss to heart, so when Jo invites her to serve as a buffer on the red carpet, Emma agrees.

But during their red carpet stroll, something happens. A photographer captures a lighthearted moment between the two women, and the next day, TMZ announces LA's hottest new couple.

Wilsner's story of Hollywood in the age of social media influencers and tabloids feels authentic. From the daily routine of showrunners to the role of assistants to producers and directors to the red carpet, we buy their take on the protagonists' lives as they maneuver through the Hollywood maze.

Something to Talk About centers on the ideas of mutual respect and friendship, and Wilsner explores those ideas with care and consideration, especially welcome in a novel that features an office romance during the #MeToo era.

And their focus on the importance of privacy in a setting where media bullying is an acceptable consequence of fame serves as a believable plot engine that delivers plenty of motivation and drama. We understand Jo's choice to hide her own growing feelings toward Emma, and why Emma doesn't want to put her boss in situations where Jo's attentiveness could be mistaken as predatory.

'Something to Talk About' centers on the ideas of mutual respect and friendship, and Wilsner explores those ideas with care and consideration.

Be prepared: This novel goes beyond romance tropes. It addresses tough topics like bias against women in the workplace, the #metoo movement, the paparazzi, the power of social media influencers and gossip sites. Frankly, there are times when Wilsner introduces so many topics, you might feel a little whiplash — but they do strive to make sure readers don't lose track of the central love story for too long.

Jo and Emma are richly drawn, and each also has an equally compelling best friend in their corner. Jo's BFF Evelyn is the source of several of the most humorous one-liners in the novel. At the same time, Emma's sister, Avery, is a delight not only because of her devotion to her sister, but also her mouthwatering baked goods.

Something to Talk About takes place over months and months. The result is a slow-burn of a romance that eventually reaches a fiery simmer. Jo and Emma don't rush into love. They take one step at a time with careful, delightful, and frequently angsty precision. It may take a while, but in the end, Meryl Wilsner's novel delivers a showstopping, sexy romance in true Hollywood style.