Accessibility links
Christo, Famous For His Monumental Works Of Art, Dies At 84 The artist known for major outdoor art installations that often involved wrapping buildings and elements of nature in fabric died at his home in New York City on Sunday.

Christo, Famous For His Monumental Works Of Art, Dies At 84

Christo, Famous For His Monumental Works Of Art, Dies At 84 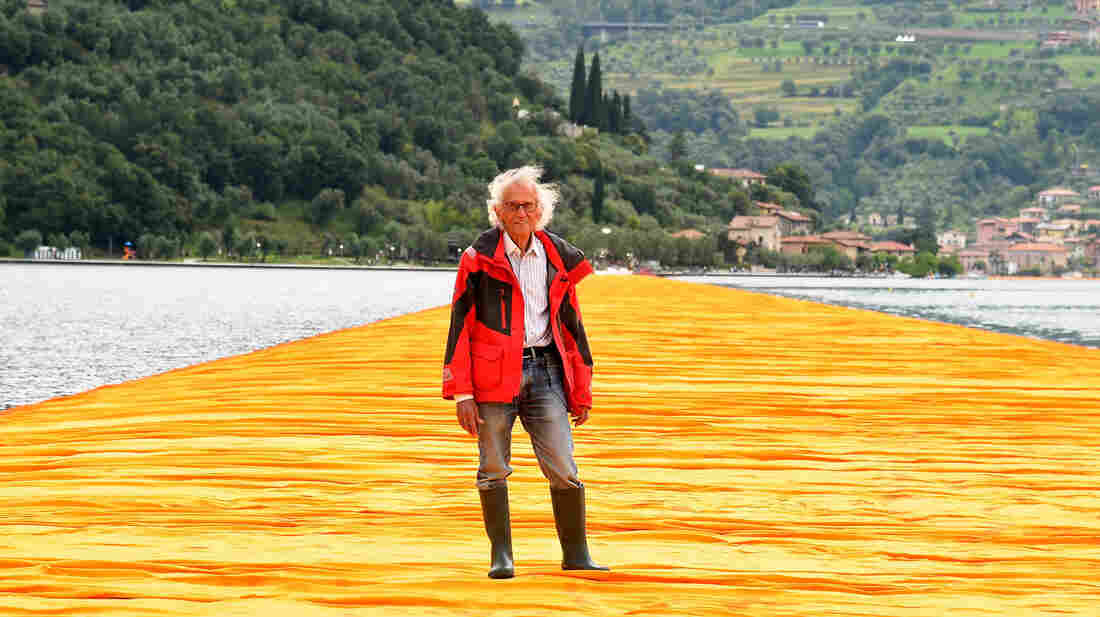 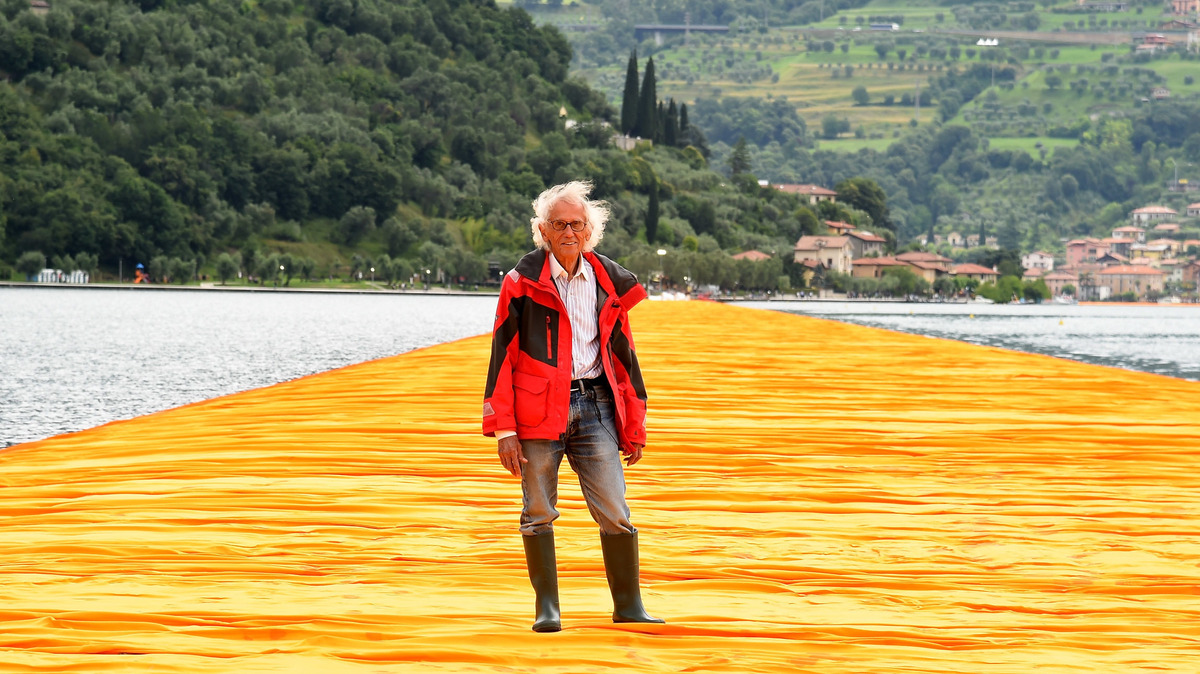 Artist Christo Vladimirov Javacheff attends the presentation of his installation The Floating Piers on June 16, 2016, in Sulzano, Italy. He died Sunday at age 84.

Artist Christo Vladimirov Javacheff, who was known for creating monumental works of art that played off of their environment in cities around the world, died Sunday at his home in New York City, according to the artist's representatives. He was 84 years old.

Christo, as he was known, along with his wife and artistic partner, Jeanne-Claude Denat de Guillebon, liked to wrap things up. In 1985, they wrapped the Pont Neuf bridge in Paris with fabric, and a decade later, they wrapped the Reichstag in Berlin with an aluminum-looking fabric. Together, they completed more than 20 projects, including a 2005 piece in which they mounted 7,503 orange fabric panels in New York City's Central Park for one of their most famous installations, The Gates. 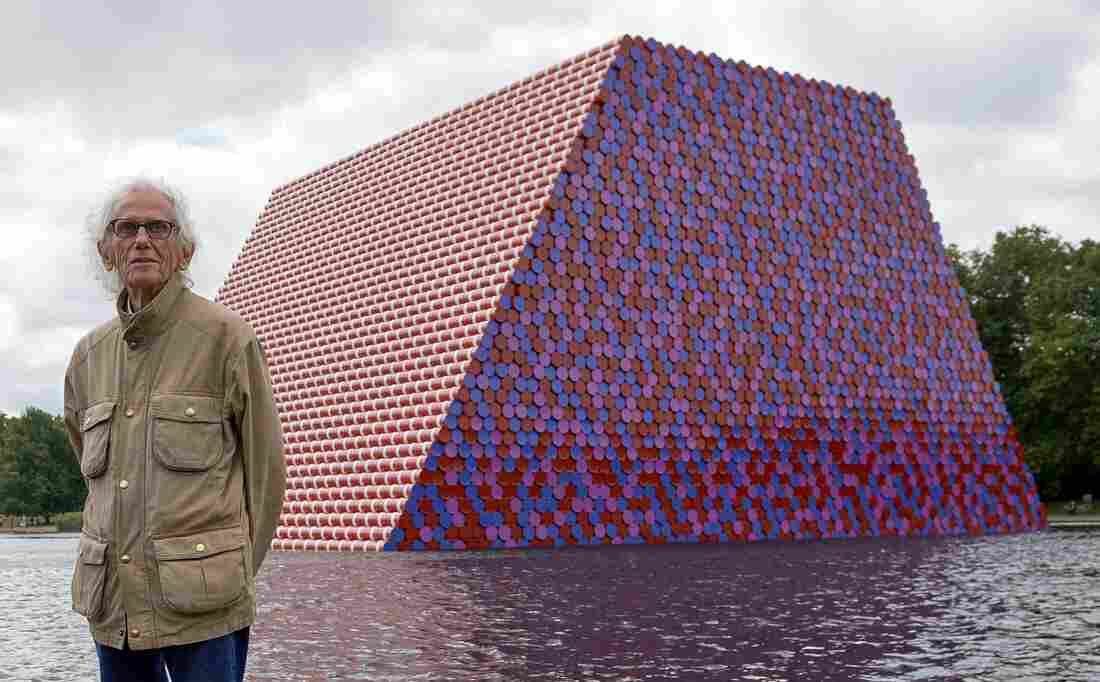 Bulgarian artist Christo Vladimirov Javacheff, better known as Christo, poses for a photograph as he unveils The Mastaba on the Serpentine lake in Hyde Park in London on June 18, 2018. Niklas Halle'n/AFP via Getty Images hide caption

After Jeanne-Claude died in 2009, Christo continued their projects. He presented The Floating Piers in 2016, a piece of work he and Jeanne-Claude first envisioned after they wrapped a massive section of the Australian coastline with fabric in 1969. The Floating Piers was a nearly 2-mile-long walkway covered in yellow-orange fabric connecting two Italian islands with the mainland.

"All the journey is the work of art," Christo told Here & Now's Jeremy Hobson in 2016 of the project that was public for just 16 days before it was taken down and recycled. "And the most beautiful part of the floating pier is to see the entire project is about the people walking nowhere. About the feeling of the surface of the land or the water. And your feet actually, many people walk barefoot. And they walk, they walk. It's not like going to shop, not going to see your friends. It's going really nowhere." 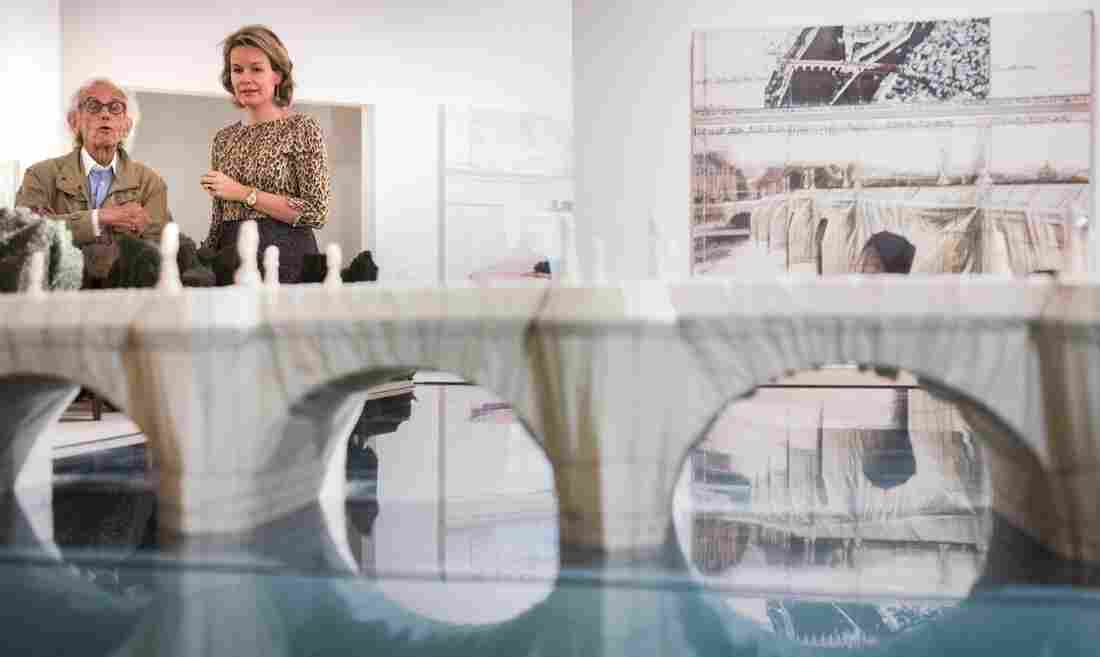 Artist Christo talks to Queen Mathilde of Belgium by a model of the 1985 Paris project "The Pont Neuf Wrapped" during a visit to the exhibition "Christo and Jeanne-Claude: Urban Projects" at the ING Art Center in Brussels in 2017. Benoit Doppagne/AFP via Getty Images hide caption

Christo and Jeanne-Claude's final project hasn't been finished — L'Arc de Triomphe, Wrapped, is still on track for fall 2021. Starting in July, a major exhibit of their work is scheduled to be on view at the Centre Pompidou in Paris.

Christo was born in Bulgaria in 1935, and he studied at the National Academy of Arts in Sofia. In 1956, he moved to Prague, then Vienna, then Geneva, and in 1958 to Paris, where he met Jeanne-Claude. The couple moved to New York City in 1964, where Christo lived most of his life. Together, they have a son, Cyril, born in 1960.

"Christo lived his life to the fullest, not only dreaming up what seemed impossible but realizing it," his office said in a statement posted to their Facebook page. "Christo and Jeanne-Claude's artwork brought people together in shared experiences across the globe, and their work lives on in our hearts and memories."