Accessibility links
President Trump, Protests And 5 Things To Watch This Week President Trump called Floyd's death a "grave tragedy" that "should never have happened." But once he was back on Twitter, he again inflamed tensions, with machismo and politics at the forefront. 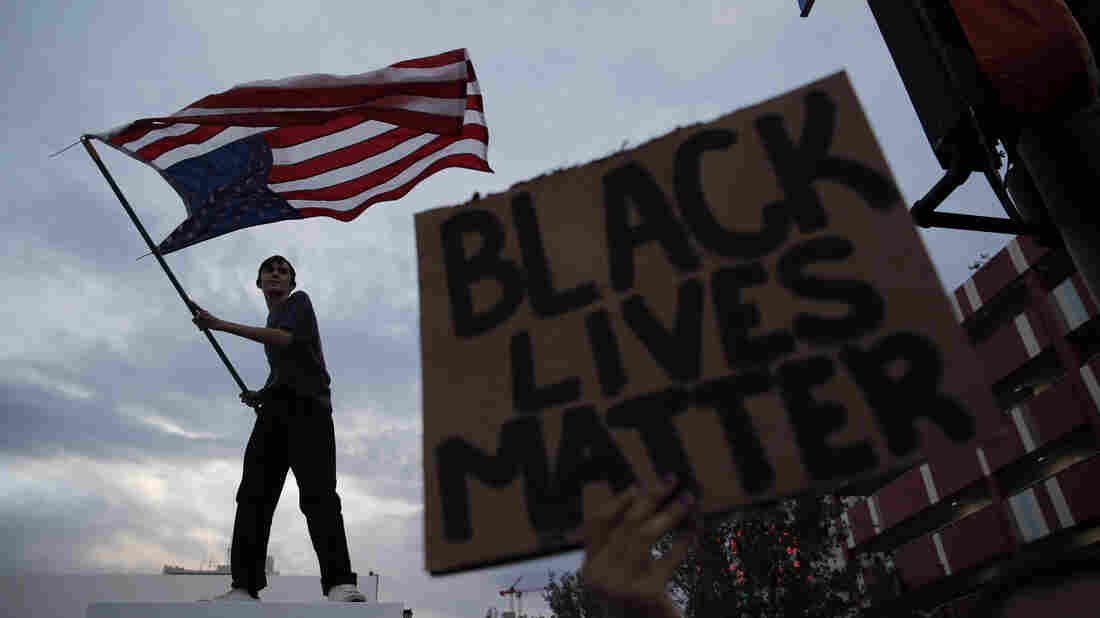 A man waves an upside-down American flag during a protest in Las Vegas following the death of George Floyd, a black man who died after a white Minneapolis police officer knelt on his neck. John Locher/AP hide caption 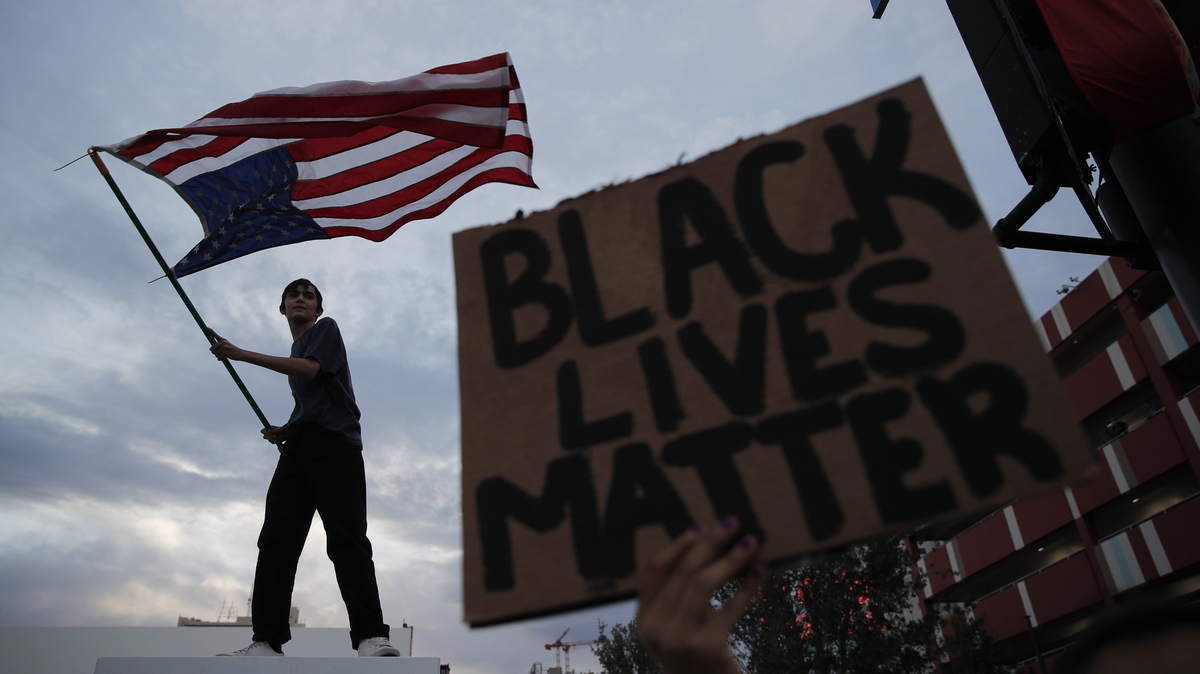 A man waves an upside-down American flag during a protest in Las Vegas following the death of George Floyd, a black man who died after a white Minneapolis police officer knelt on his neck.

Through days of unrest, dozens of American cities — from Minneapolis to Atlanta, from New York to Grand Rapids, Mich. — have been wracked by violent protests.

Racial wounds have been ripped open following the death of George Floyd, an unarmed black man in police custody in Minneapolis. The chaotic demonstrations and looting across the country have been blamed on outsiders of various political stripes, particularly "radical-left" groups like antifa, which is short for "anti-fascist."

But the country is at an especially explosive moment, coming in the midst of a pandemic that has already killed more than 100,000 and an economic crisis with more than 40 million Americans unemployed — and in an election year no less.

There's no telling how this plays out politically in November, with the election now five months away. Anything can happen. Five months ago, after all, the coronavirus was just a "pneumonia of unknown cause."

President Trump called Floyd's death a "grave tragedy" that "should never have happened." Those remarks were made at the first launching of American astronauts into space from U.S. soil in almost a decade — what was one of the hopeful bright spots in this country, though it was overshadowed by the violent demonstrations.

But once Trump was back on his favorite platform, Twitter, he again inflamed tensions, with machismo and politics at the forefront. He criticized local Democratic officials, saying Minneapolis's mayor, for example, was no "General Douglas McArthur [sic] or great fighter General George Patton."

He has called demonstrators "THUGS" and warned that "when the looting starts, the shooting starts" — though he later said he didn't use that phrase as a threat. And he has employed violent, tough-guy imagery, alluding to the potential use of "unlimited" military power, "vicious dogs, and most ominous weapons."

Even some Republicans criticized the president's language.

Sen. Tim Scott of South Carolina, the only black Republican in the Senate, called the president's tweets "not constructive" on Fox News Sunday. And Maryland Gov. Larry Hogan told CNN that Trump is "continuing to escalate the temperature," which is the "opposite" of what a leader should be doing right now.

Meanwhile, Trump's national security adviser, Robert O'Brien, on Sunday waded into a crucial debate — whether there's "systemic racism" in police forces or whether there are just a few "bad apples."

"I don't think there's systemic racism" in law enforcement, O'Brien said on CNN, "but, you know what, there are some bad apples in there. ... There's no doubt there are some racist police" but, he said, they're the minority.

Americans are divided on their views of police. Back in mid-2017, Gallup found that 54% of Americans have a great deal or quite a lot of confidence in the police. But there were very different views by race. While 61% of whites had that level of confidence in police, just 45% of Hispanics and 30% of blacks did.

Confidence in police nosedived among minorities and liberals after the rash of high-profile incidents of black men killed at the hands of police in 2014 and 2015, such as Michael Brown in Ferguson, Mo., Eric Garner in New York and Freddie Gray in Baltimore.

Views of the police and law enforcement have become a sharp dividing line by race and party. In 2016, Trump declared himself the "law and order candidate." Expect him to try to exploit that again as a wedge issue in an effort to win over moderate whites upset by the video of Floyd's death but disapproving of the violent demonstrations.

He said as much Sunday. He called for "Law & Order in Philadelphia, NOW!" and announced that the United States would be designating antifa a terrorist organization.

Expect presumptive Democratic presidential nominee Joe Biden and other Democrats now to have to answer if they agree or disagree with the antifa designation.

Of course, it's also possible that Trump went too far already, something some advisers are privately concerned about, and that his rhetoric could hurt him with independents and suburban women.

5 things to watch this week

1. Trump's response to unrest: How Trump responds this week to the violent demonstrations and race relations in America could be consequential. Will it be Teleprompter Trump or Twitter Trump, or both at the same time once again?

Florida Rep. Val Demings, who's on the shortlist to be Joe Biden's presidential running mate, said on NBC's Meet the Press on Sunday: "If there ever was a time we need leadership in the White House, it is now, to help heal our nation, but I don't know why I would expect this president to do something that he has never done before." 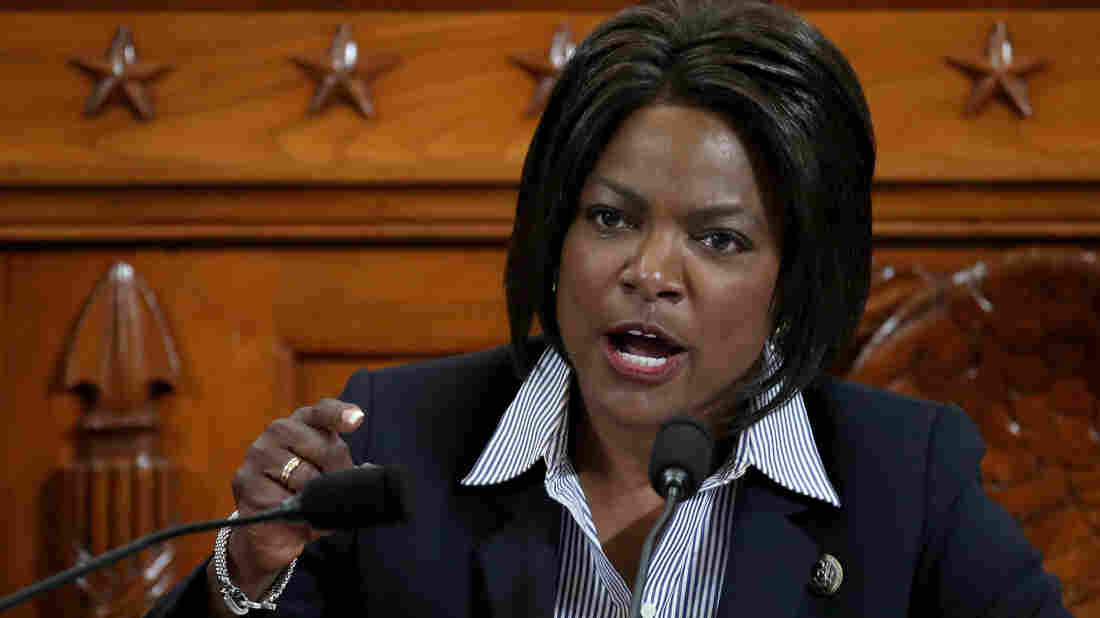 Rep. Val Demings said Sunday that leadership is needed right now but that she doesn't think the president can provide it. Drew Angerer/Pool/AFP via Getty Images hide caption 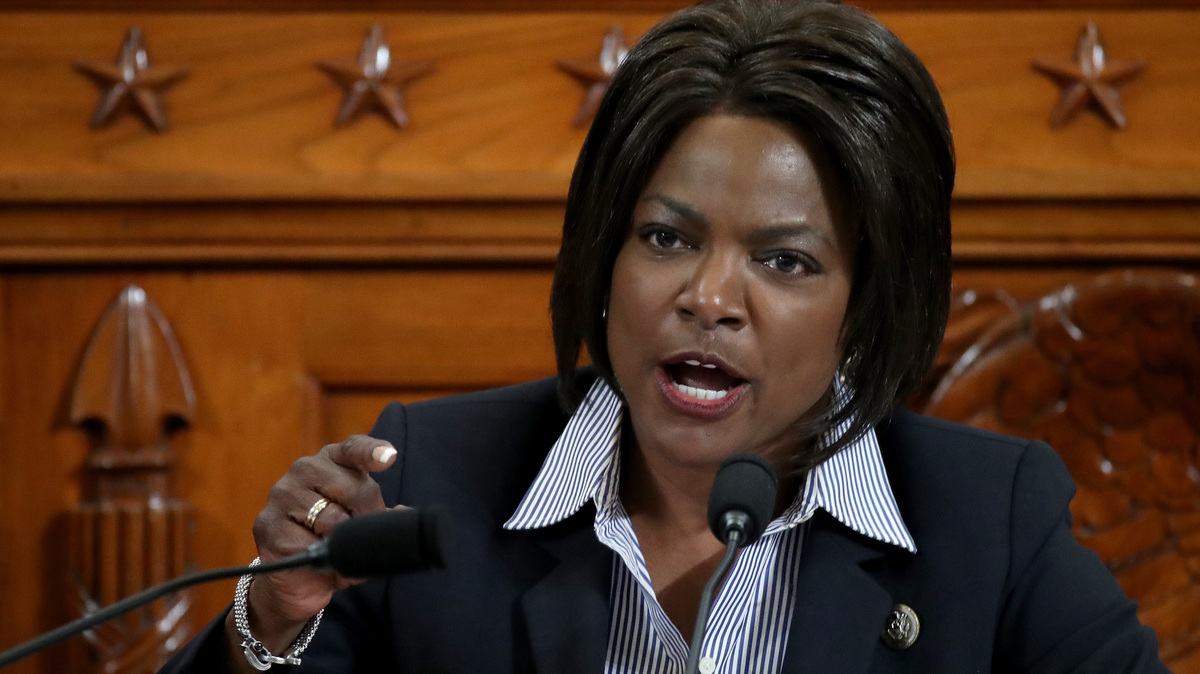 Rep. Val Demings said Sunday that leadership is needed right now but that she doesn't think the president can provide it.

2. The great American coronavirus experiment: It's the first day of June, and with it, many states are making continued steps into phased reopenings.

April and May saw more than 100,000 people die in the U.S. from the coronavirus. Some health experts have warned that a resurgence in cases could take place if Americans don't adhere to strict social distancing, or take other precautions like wear masks.

The White House has also said that cases could go down in the warmer summer months. Does that happen? And if so, do Americans get too comfortable and lapse into a false sense of security — only to see a spike in the fall? None of it's clear, but the U.S. is heading into a period of pandemic experimentation with no vaccine or cure for the coronavirus as yet.

3. Could Steve King lose? Steny Hoyer faces challenge: It's hard to believe, but there are elections on Tuesday.

Two of the marquee races deal with well-known — and very different — political figures. Controversial Rep. Steve King, with a history of making racist remarks, is in a fight for his political life with state Sen. Randy Feenstra in Iowa's Republican primary. Conservative groups have lined up against King, but he can't be counted out. This district has a long history of voting for him, despite his pariah status within the party.

Rep. Steve King Fights For His Seat As GOP Works To Push Him Out

In Maryland, Steny Hoyer, No. 2 in House Democratic leadership, is facing a primary challenge from the left in 29-year-old McKayla Wilkes, inspired by Alexandria Ocasio-Cortez's unlikely win in New York over Joe Crowley, a former congressional Democratic leader.

4. Biden to get closer to officially clinching nomination: Biden, the presumptive Democratic nominee, is on the ballot Tuesday, too.

Remember, he still hasn't acquired the delegates needed to officially put him over the top for the nomination. He is 425 delegates short of doing that. With 500 at stake Tuesday, Biden needs 85% of them Tuesday to clinch.

That's unlikely, so look at next week, June 9, when Georgia and West Virginia vote — with their 133 delegates up for grabs — for Biden to hit the magic number of 1,991. (Follow all the math here with the NPR delegate tracker.)

5. Origins of Trump campaign investigation to be probed: In Congress, former Deputy Attorney General Rod Rosenstein will testify Wednesday before the Senate Judiciary Committee, which is looking into the origins of the FBI's investigation into members of the 2016 Trump campaign.

The Senate is also expected to vote on nominations, including for the Treasury Department's inspector general for the pandemic response.

And action is possible on changes to the Paycheck Protection Program, or PPP. Last week, the House, nearly unanimously, passed a bill that reduces the percentage of the loans that businesses have to use toward payroll and gives businesses more time to spend the money and to pay the loans back.

"When you see these thugs being thrown into the back of a paddy wagon, you just seen them thrown in, rough. I said, 'Please don't be too nice.' When you guys put somebody in the car and you're protecting their head you know, the way you put their hand over [their head]. Like, 'Don't hit their head, and they've just killed somebody, don't hit their head.' I said, 'You can take the hand away, OK?' "

A previous version of this story misspelled Freddie Gray's first name as Freddy.