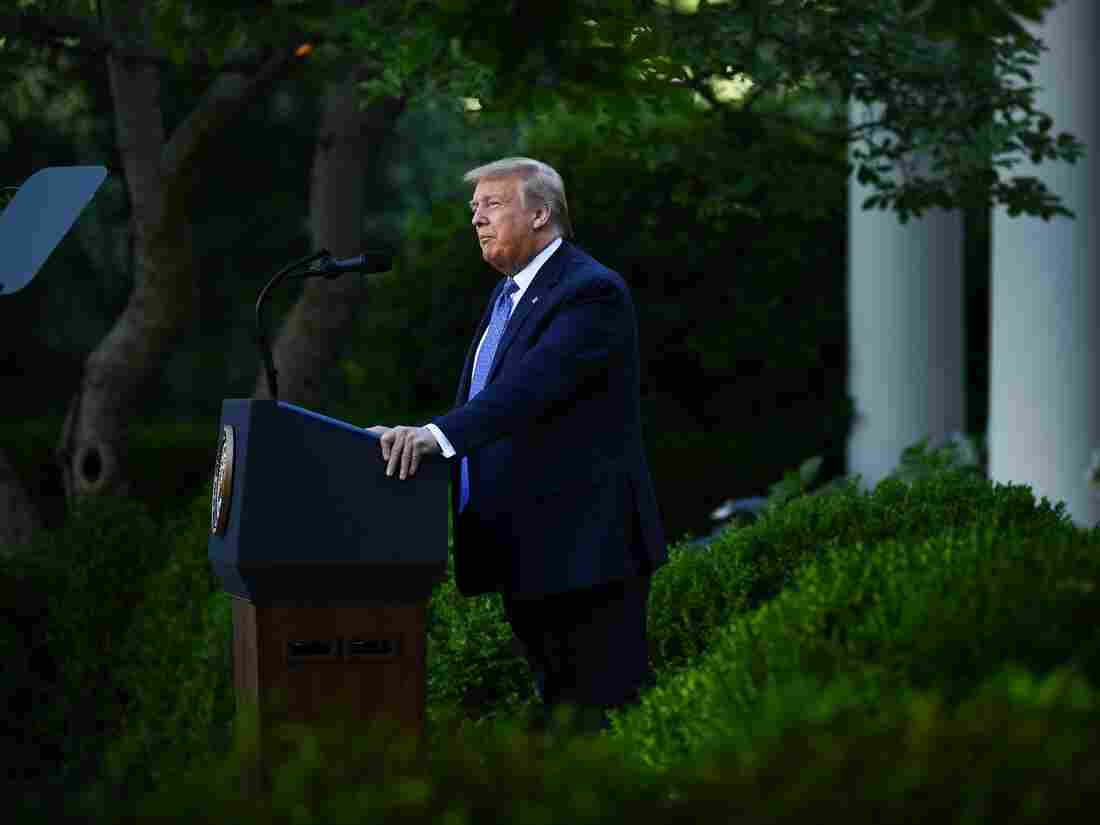 President Trump delivers remarks in front of the media in the Rose Garden of the White House on Monday. Brendan Smialowski/AFP via Getty Images hide caption 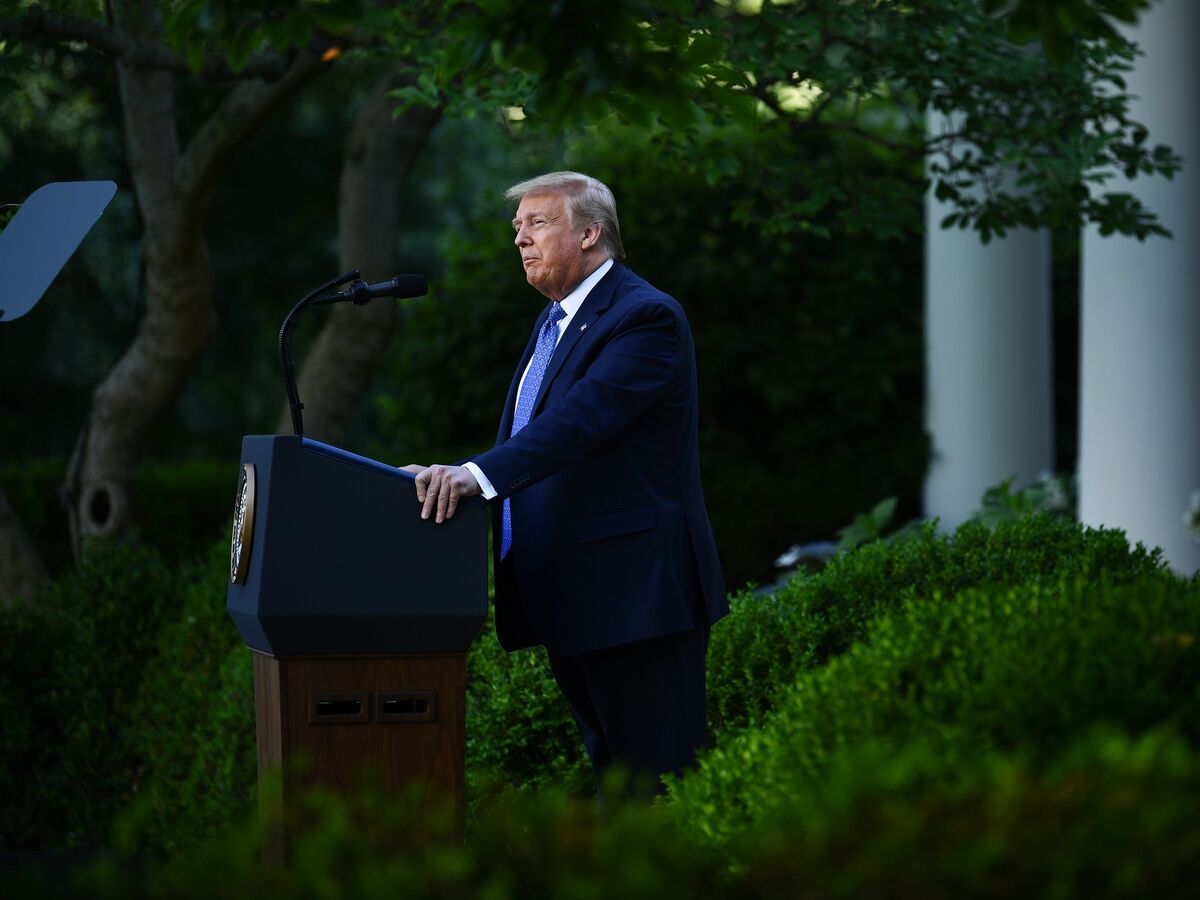 President Trump delivers remarks in front of the media in the Rose Garden of the White House on Monday.

Escalating his rhetoric during a period of roiling national crises, President Trump on Monday threatened to deploy the U.S. military to cities or states that don't take "necessary" actions to halt violent protests, saying the armed forces will "quickly solve the problem for them."

The protesters were removed from the Lafayette Square area across from the White House, apparently to clear the way for the president to walk to St. John's Church, where he posed briefly for photographers, holding a Bible. Parts of the church compound were damaged by rioters on Sunday night.

In a statement, Judd Deere, the White House's deputy press secretary, said: "The perimeter was expanded to help enforce the 7 p.m. curfew in the same area where rioters attempted to burn down one of our nation's most historic churches the night before. Protesters were given three warnings by the U.S. Park Police." 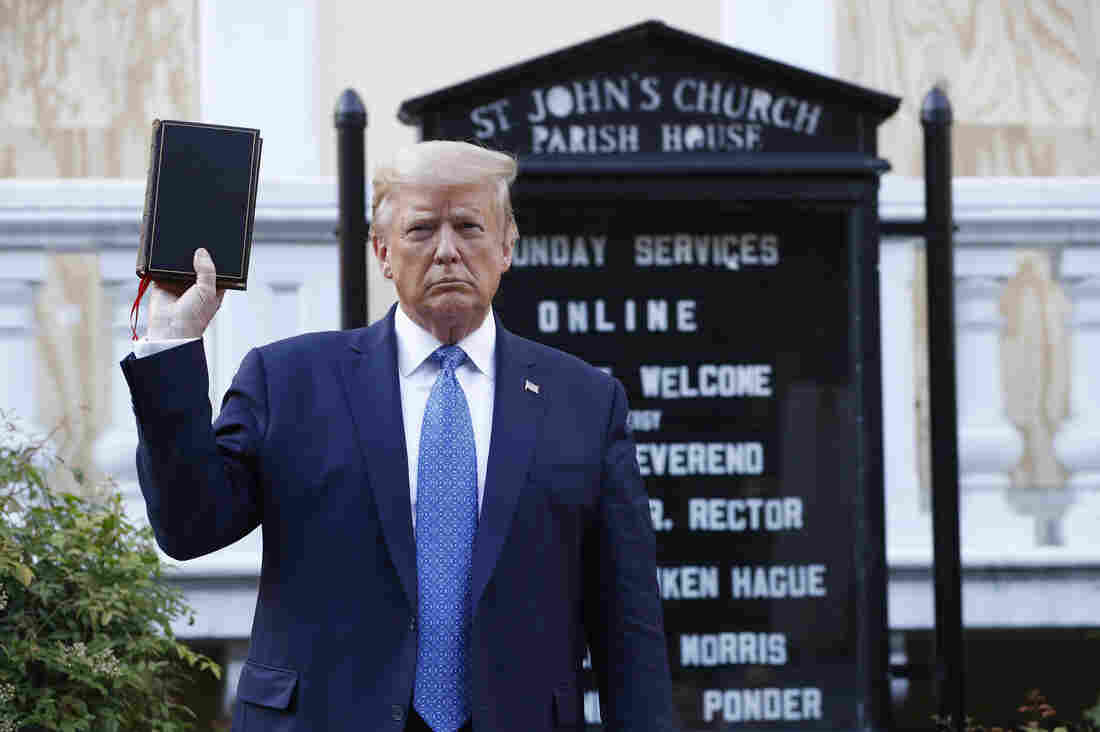 President Trump holds a Bible as he visits outside St. John's Church across Lafayette Park from the White House on Monday. Patrick Semansky/AP hide caption

Trump's remarks, which lasted less than seven minutes, came after days of protests in dozens of cities across the U.S. following the death of George Floyd, a black man who died in police custody in Minneapolis a week ago.

During the remarks, Trump declared himself "a law-and-order president" and "ally of all peaceful protesters," but he called violent unrest that has accompanied many demonstrations "acts of domestic terror."

"These are not acts of peaceful protests. These are acts of domestic terror. The destruction of innocent life, and the spilling of innocent blood, is an offense to humanity and a crime against God," Trump said.

He added: "Our country always wins. That is why I am taking immediate presidential action to stop the violence."

Trump said he had mobilized "thousands and thousands" of "heavily armed" military personnel to put an end to the protests, which were born from criticisms of excessive force by law enforcement.

It was not immediately clear, however, what precise changes might be in store for the personnel who have been responding to the demonstrations across the country.

The Justice Department said in a statement that beginning Monday night, it had deployed all of its law enforcement components and is coordinating with the Department of Defense, the Department of Homeland Security and local authorities to "maximize federal security presence throughout the District [of Columbia]."

Threatening state governors who have declined to deploy the National Guard, Trump said he would dispatch the U.S. military to "quickly solve the problem for them."

After the stop at St. John's Church, Trump and a retinue of advisers and staffers then returned to the secure enclave within the White House complex.

Protests, which have at times broken out into violence and looting, continued from the weekend into Monday, following the video-recorded death of Floyd, who died after a white officer knelt on his neck for nearly nine minutes.

Protesters — many of whom have worn masks because of the coronavirus pandemic — have demanded that the officers involved be held accountable for Floyd's death.

Derek Chauvin, the officer who knelt on Floyd's neck, has been arrested and charged with third-degree murder and second-degree manslaughter. Three other officers who were involved in the incident have been fired but have not been charged.

Several major cities, including Washington, D.C., were placed under curfews following the unrest. Trump's walk to the nearby church, which he does not typically visit, technically violated the District of Columbia's Monday curfew for a little time.

The National Guard has been deployed in many states, and the president on Monday called for governors to "dominate" in their states to put an end to the protests.

His remarks Monday stand in stark contrast to the position he took toward heavily armed majority-white protesters last month, who stormed the Michigan statehouse in defiance of stay-at-home orders to demand a reopening of the state economy amid the coronavirus pandemic.

Trump described those protesters as "very good people" and called on the governor to "give a little" to appease them.

The protests against police violence come against the backdrop of the coronavirus pandemic, which has caused more than 100,000 deaths in the U.S., with black Americans disproportionately affected.

With reporting by Tamara Keith