Accessibility links
Sports Figures Add Their Voices To Those Of Angry Protesters In the days since George Floyd was killed while in police custody in Minnesota, sports figures have started speaking out, too. Some even joined the demonstrations that have swept the nation. 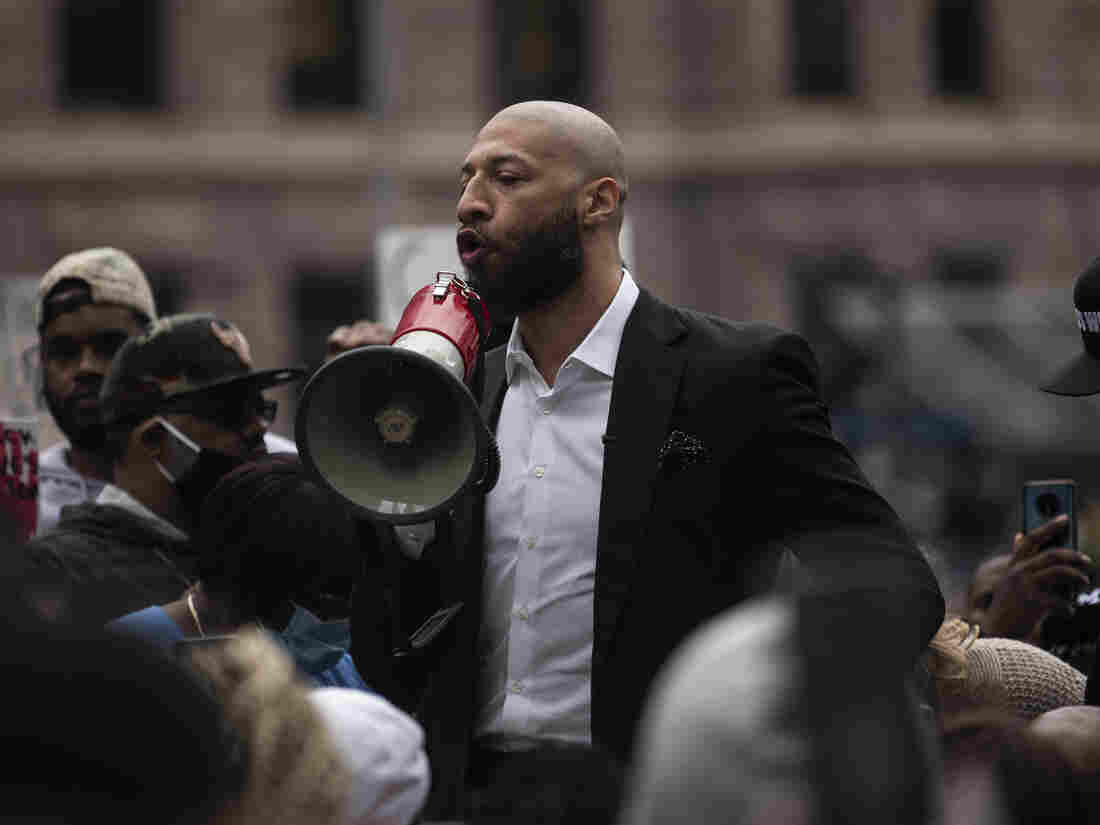 Sports are part of the fabric of American society, and often they've provided a medium for athlete protest. In recent years, former San Francisco 49ers quarterback Colin Kaepernick was the face of the movement. In 2016, he began kneeling before games, during the playing of the national anthem, to protest police treatment of minorities and social inequality.

Since last week's death of George Floyd, an African American man who died after a Minneapolis police officer kneeled on his neck, there's been a surge of sports figures speaking out. Some have even joined demonstrations that have swept the nation.

True to its status as the most politically progressive of this country's major sports, the NBA has had many players and officials lend their voices – from Commissioner Adam Silver to Los Angeles Lakers star LeBron James to legendary Lakers center and longtime political activist Kareem Abdul-Jabbar, who wrote about what he believes is the motivation behind the widespread protests.

"The black community is used to the institutional racism inherent in education, the justice system and jobs," Abdul-Jabbar said in a Los Angeles Times essay last weekend. "And even though we do all the conventional things to raise public and political awareness ... the needle hardly budges."

He added, "Yes, protests often are used as an excuse for some to take advantage, just as when fans celebrating a hometown sports team championship burn cars and destroy storefronts. I don't want to see stores looted or even buildings burn. But African Americans have been living in a burning building for many years, choking on the smoke as the flames burn closer and closer. Racism in America is like dust in the air. It seems invisible — even if you're choking on it — until you let the sun in."

Even Michael Jordan weighed in publicly, which to many was a surprise.

The recent 10-part ESPN documentary, The Last Dance, lionized the legendary Chicago Bulls star, although it touched on a few perceived shortcomings, including what some see as Jordan's unwillingness to speak out on political issues.

"I wasn't a politician when I was playing my sport. I was focused on my craft. Was that selfish? Probably. But that was my energy. That's where my energy was."

But now Jordan is speaking out, an indication of how deeply Floyd's death has resonated.

"I am deeply saddened, truly pained and plain angry," Jordan said in a statement posted on Twitter. "I see and feel everyone's pain, outrage and frustration. I stand with those who are calling out the ingrained racism and violence toward people of color in our country. We have had enough."

There have been other heartfelt, and perhaps surprising, shows of solidarity.

Philadelphia Eagles quarterback Carson Wentz also has been largely apolitical in his four years in the NFL. But last week, Wentz was one of the first prominent white athletes to speak out.

"Being from North Dakota, I've spent a large part of my life surrounded by people of similar color, so I'm never gonna act like I know what the black community goes through or even has gone through," Wentz said on Twitter. "I'll never know the feeling of having to worry about my kids going outside because of their skin color. ...

"I don't understand the society we live in that doesn't value all human life. It's heartbreaking and disturbing. My prayers go out to every man, woman and child that has to endure the effects of the racism in our society."

"You didn't have to say a thing but you did," former Eagles receiver Torrey Smith tweeted, adding, "Love you bro."

Traditionally, Major League Baseball has, as a sport, avoided politics.

A number of big leaguers have weighed in, including Washington Nationals relief pitcher Sean Doolittle. He's white, and he offered historical context in a tweet with the hashtag #BlackLivesMatter.

"Racism is America's Original Sin," Doolittle wrote. "It was here before we even forged a nation, and has been passed down from generation to generation. And we still struggle to acknowledge that it even exists, much less atone for it. The generational trauma of racism and violence is killing black men and women before our eyes. ...

"We must not look away from the racism and violence. ... We must take action and call it out for what it is. We must recognize our shared humanity and atone for our Original Sin, or else we will continue to curse future generations with it.

Even though the current environment seems to encourage sports figures to speak out, there's also notable silence coming from the sports world.

Moton is the men's basketball head coach at North Carolina Central University. He said white basketball and football coaches from the most prominent college conferences in the nation — the Power Five — are not speaking up.

And he said he believes they should be. In fact, he said, they're obligated to do so.

"The reality is, a lot of these coaches have been able to create generational wealth," Moton told ESPN Radio. "Their grandkids' kids are gonna be able to live a prosperous life because athletes who were the complexion of George Floyd were able to run a football, throw a football, shoot a basketball or whatever have you, so they have benefited greatly from athletes that look like George Floyd and many more. But whenever people the complexion of George Floyd are killed, assassinated, murdered in the street in broad daylight, they're silent."

Nick Saban is the most famous active head coach in Division 1 college football. He also released a statement about Floyd.

"We're at an important moment for our country," the University of Alabama coach said in a message that cited civil rights icons Rosa Parks and the Rev. Martin Luther King Jr., "and now is the time for us to choose kindness, tolerance, understanding, empathy, and most importantly ... it's time to love each other. Every life is precious, and we must understand we have so many more things that unite us than divide us."

Still, the complexity of Kaepernick

Sunday's Houston Chronicle sports section went beyond the myriad athlete and coach statements of grief and resolve. It took a strong stand with a full-page editorial statement.

The page had a picture of Floyd at the top and a kneeling Kaepernick at the bottom. In between, a section read, "Imagine, if we had embraced Colin Kaepernick's peaceful protest and paid attention to the issue he was trying to address."

It wasn't the only connector between Floyd and Kaepernick. A dramatic meme circulating since Floyd's death shows a picture of the Minneapolis police officer kneeling on Floyd's neck, next to a picture of Kaepernick kneeling in protest.

The visuals have stirred up the not-too-distant memory of Kaepernick's protest, which began in 2016, and was politicized from the beginning.

And it's prompting harsh criticism of the NFL, even as the league joins the massive sports outpouring of grief and anger.

"These tragedies inform the NFL's commitment and our ongoing efforts," Goodell said, adding, "There remains an urgent need for action. We recognize the power of our platform in communities and as part of the fabric of American society. We embrace that responsibility and are committed to continuing the important work to address these systemic issues together with our players, clubs and partners."

Critics blasted Goodell for what they called hypocrisy.

"Colin Kaepernick asked the NFL to care about the lives of black people and they banned him from their platform," said Michael-Shawn Dugar, an NFL writer for The Athletic.

Instead of prompting a discussion about police treatment of minorities and social inequality, Kaepernick's protests prompted a debate about patriotism and the flag, fueled by President Trump, who used an expletive to describe Kaepernick and other players who joined the pregame protests.

Even though the NFL ultimately endorsed social justice initiatives, Kaepernick still is considered a pariah — no NFL owner has hired him. And with the league dealing with a significant lack of diversity in important head coaching and general manager positions, Goodell's critics said his reference to the league's "commitment and our ongoing efforts" is insincere.

On their face, Goodell's words seemed in lockstep with much of the rest of the sports world as it grapples with and grieves over Floyd's death. But for many, the renewed attention on Kaepernick and his experience present just as powerful a message about the powerful NFL, where, in the volatile realm of race and justice, words appear louder than actions.