Accessibility links
June 2 Primaries Live Results: Steve King And Other Races To Watch Iowa Rep. Steve King faces a strong GOP primary challenger after years of incendiary comments have put him on the outs with his party. Eight states and the District of Columbia vote on Tuesday. 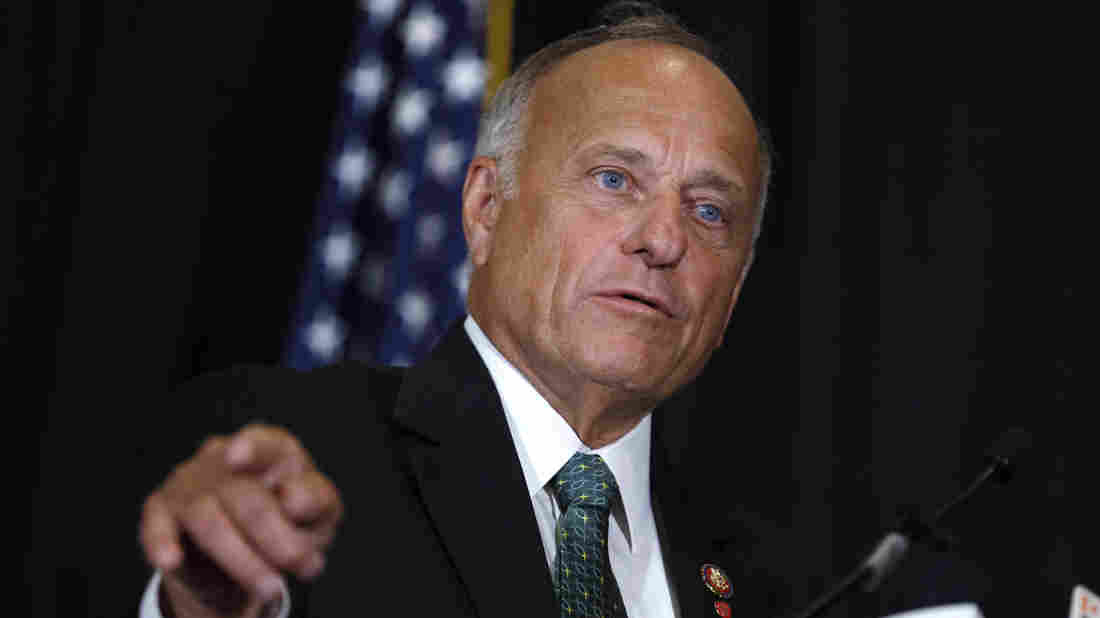 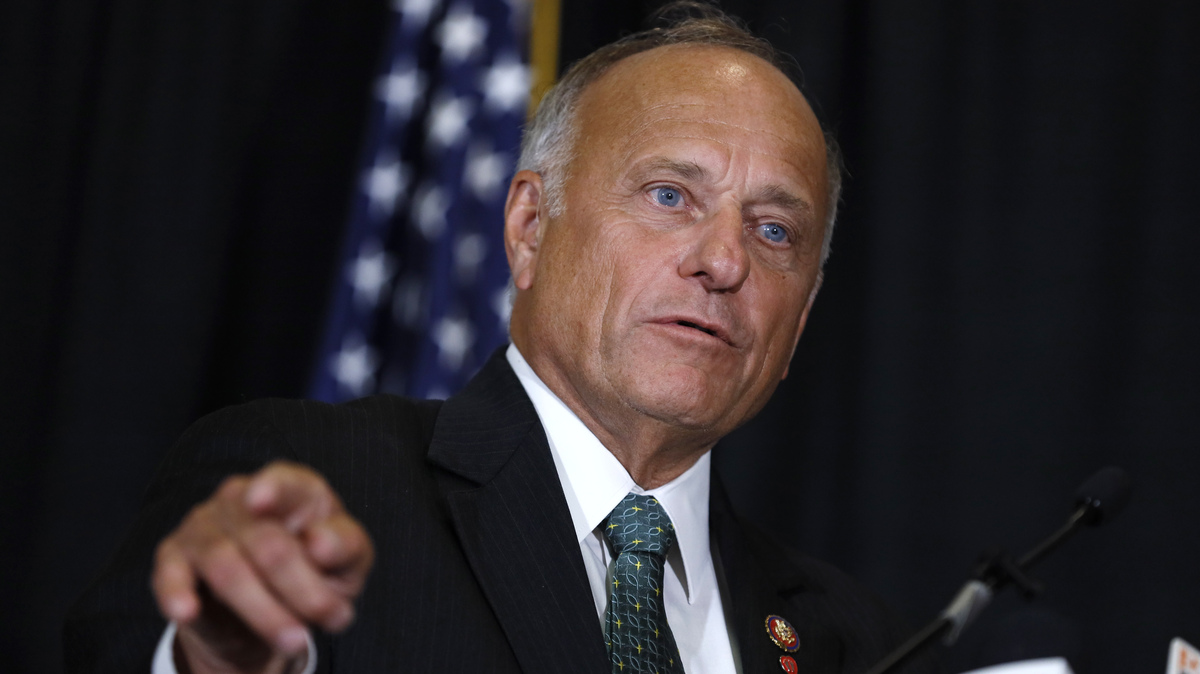 Iowa Rep. Steve King is facing a fierce primary challenge from fellow Republicans after years of incendiary comments about abortion, immigrants and Islam.

With everything going in the country — from the unrest in many cities after the death of George Floyd at the hands of police to the coronavirus pandemic — it's easy to have missed that elections are being held.

But several states and the District of Columbia have primaries up and down the ballot: Indiana, Iowa, Maryland, Montana, New Mexico, Pennsylvania, Rhode Island and South Dakota.

Pennsylvania is holding primary voting on Tuesday, though Gov. Tom Wolf extended the deadline for voting by mail by one week, until June 9.

Here are the races to watch. Live results will appear Tuesday evening.

Presidential primaries press on. Former Vice President Joe Biden, the presumptive Democratic nominee, has not yet officially clinched the nomination. He went into the day 425 delegates short of the magic number of 1,991.

With 500 delegates at stake Tuesday, he needs 85% of the delegates up for grabs, which he's unlikely to get. More likely, Biden will cross the threshold next week, June 9, when Georgia and West Virginia vote, with their 133 delegates at stake (and when we'll get the results of Pennsylvania's primary, with its 186 delegates).

Rep. Steve King on the ropes. The controversial Iowa conservative faces real danger in his primary for reelection from Iowa's 4th Congressional District. After racist and pro-white nationalist remarks, much of the Republican establishment abandoned King. They've come for him before in his almost 20 years in Congress unsuccessfully. But this has been their best chance so far. King has trailed in the polls, with only $30,000 cash on hand and no TV ads running. The favorite among his challengers has been state Sen. Randy Feenstra, who has painted King as ineffective in the House, given that he was stripped of key committee assignments. But King is well known as a familiar choice for conservatives in western Iowa and has been resilient.

Steny Hoyer faces a challenge from the left. A veteran lawmaker from Maryland's 5th Congressional District and No. 2 in House Democratic leadership, Hoyer faces a progressive primary challenge from 29-year-old Mckayla Wilkes. Wilkes, a single mother, was inspired by Rep. Alexandria Ocasio-Cortez's victory in New York in 2018 over another veteran white male Democratic leader. Wilkes raised $300,000 and said Hoyer, who has been in Congress almost 40 years, is out of touch with the district. The Democratic establishment has remained behind Hoyer, though, including the Congressional Black Caucus, which endorsed him. He has outspent Wilkes $2.7 million to $237,000.

Spy games in New Mexico. The announced retirement of New Mexico Sen. Tom Udall set off a domino effect. Democratic Rep. Ben Ray Luján declared for Udall's Senate seat, leaving open his seat in the 3rd Congressional District. Enter: Valerie Plame, the ex-CIA agent. She has raised and spent more than any candidate in this race and gained national attention with her glossy campaign ad showing her racing backward in a Chevy Camaro on a dusty road.

But locally, her candidacy has looked less like an easy Sunday drive. She faced criticism for being a relative newcomer, moving to the area in 2007; the district is 41% Latino and 19% Native American, and another candidate, Teresa Leger Fernandez, got the endorsements of the political arm of the Congressional Hispanic Caucus and EMILY's List.

It is very possible that New Mexico sends an all-female House delegation to Congress in 2021, as freshman Democrats Deb Haaland and Xochitl Torres Small are the incumbents in the state's other two districts. But Torres Small has to win what's expected to be a tough reelection race in the 2nd District. Trump won there by 10 points in 2016, and the primary to decide who will take on Torres Small this fall is a contest between two Republican women.

It has been a nasty primary between Yvette Herrell, the 2018 nominee, and Claire Chase, an oil executive. Both have campaigned on who's the most pro-Trump; Herrell got the backing of the House Freedom Caucus, but Chase has outraised and outspent Herrell, with support from Defending Main Street, a group with ties to establishment Republicans.

Senate matchups to be set in Iowa and Montana. Democrats are hoping to take back the Senate this fall. They have an outside shot at that right now, but their odds have looked increasingly better of late. Partially, that's because of these two races.

In Iowa, Democrats are targeting incumbent Republican Joni Ernst, but first there's the primary Tuesday. The Democratic Senatorial Campaign Committee has backed real estate executive Theresa Greenfield in the four-way contest. Greenfield raised $7.1 million and went into Tuesday as the favorite. Other Democrats include retired Adm. Mike Franken, attorney Kimberly Graham and Eddie Mauro, a businessman and former teacher and coach who has spent the second most — $1.4 million — on this primary.

When Montana Democratic Gov. Steve Bullock changed his mind and decided to challenge incumbent Republican Sen. Steve Daines, it suddenly put this race on the map for Democrats in a big way. Three other Democrats are on the ballot Tuesday, but Bullock has been expected to win easily, raising more than 10 times what his next opponent has.

Indiana openings. The retirements of moderate Democrat Pete Visclosky in Indiana's 1st District and Republican Susan Brooks, one of only 13 Republican women in Congress, in the 5th District has opened up both of these ideologically divergent seats. More than half a dozen Democrats are competing in the 1st District, which is suburban and exurban Chicago, a place that went for Hillary Clinton with 54% of the vote in 2016.

In the 5th District, a handful of Republicans have duked it out, including state Sen. Victoria Spartz, who raised and spent the most and got the backing of the Club for Growth, and Beth Henderson, a local businesswoman with the endorsement of Indiana Sen. Mike Braun. Democrats have rallied around one candidate, Christina Hale. This district has been in GOP hands for a long time, but it could be one to watch this fall. The Cook Political Report lists it as only "lean Republican." Trump won it with 53% in 2016.