Accessibility links
Despite Curfews And Heavy Police Presence, Protests Persist Across The Country Protesters outraged over police brutality and systemic racism have spilled into the streets across the country, from Minneapolis to New York and in smaller cities such as Omaha, Neb. 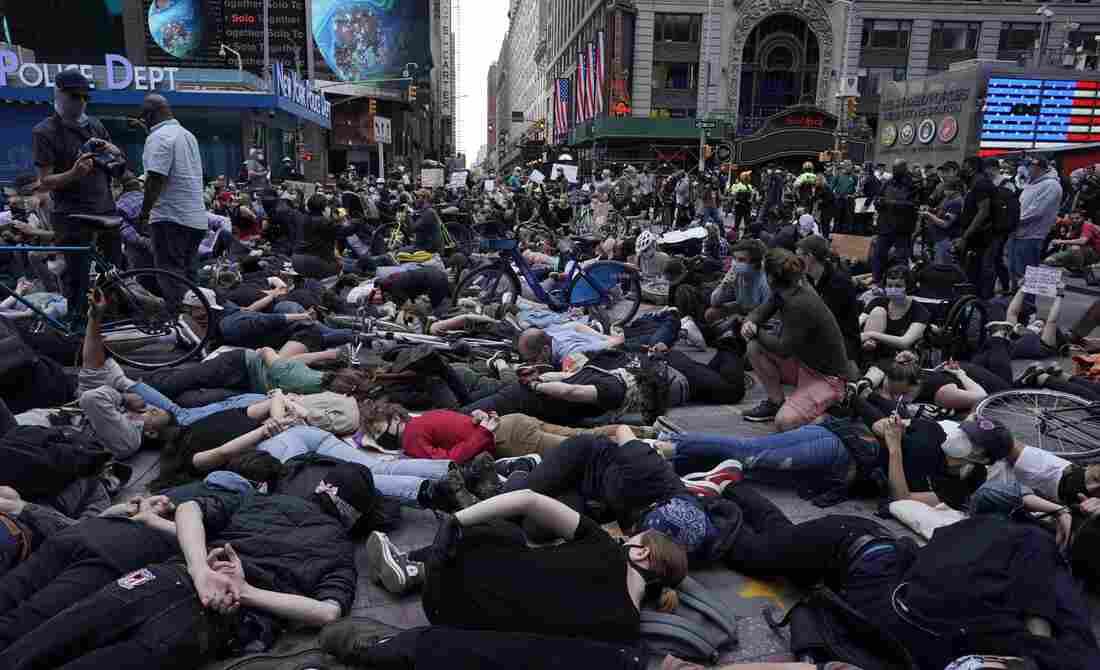 Protesters lie on the ground with their hands behind their backs in New York City's Times Square on Monday. Outrage over police brutality and systemic racism has spilled into the streets in cities across the country. Timothy A. Clary/AFP via Getty Images hide caption 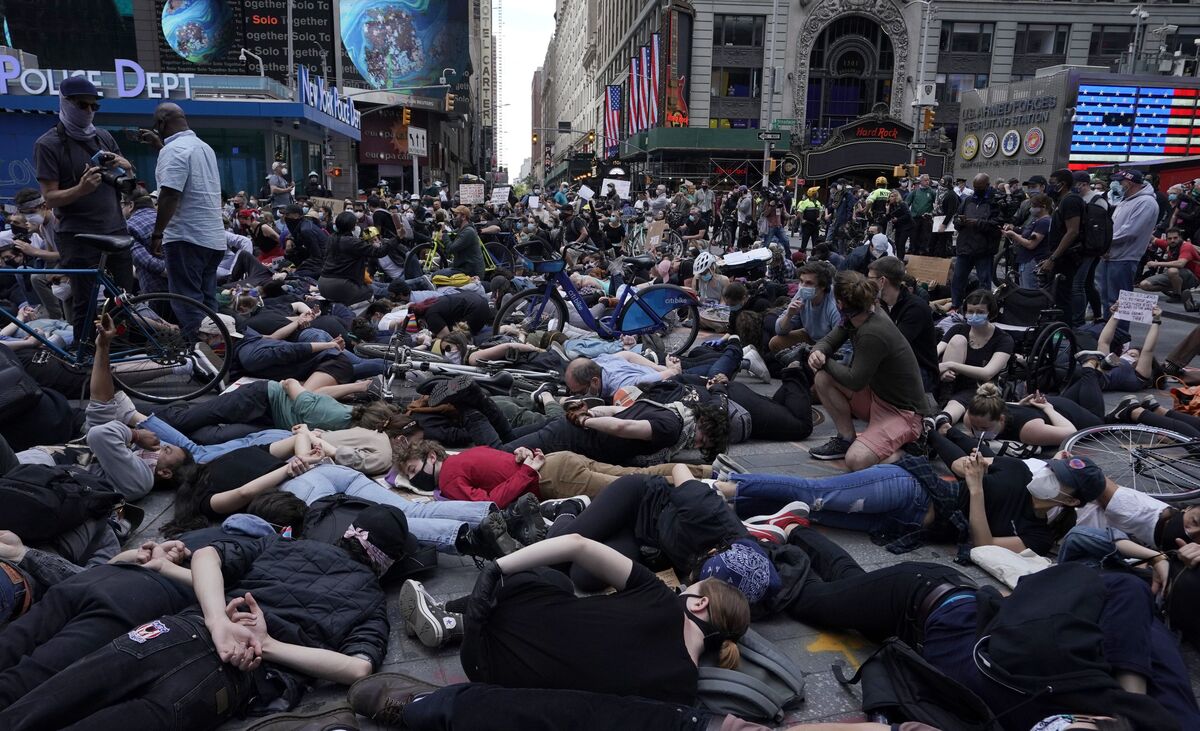 Protesters lie on the ground with their hands behind their backs in New York City's Times Square on Monday. Outrage over police brutality and systemic racism has spilled into the streets in cities across the country.

One week after the death of George Floyd in Minneapolis Police custody, demonstrations against police brutality and systemic racism continued across the United States. Many cities imposed curfews, and President Trump again warned he would order active duty military forces to restore order if state and local governments, in his judgement, failed to do so.

Here are details of some protests around the country. 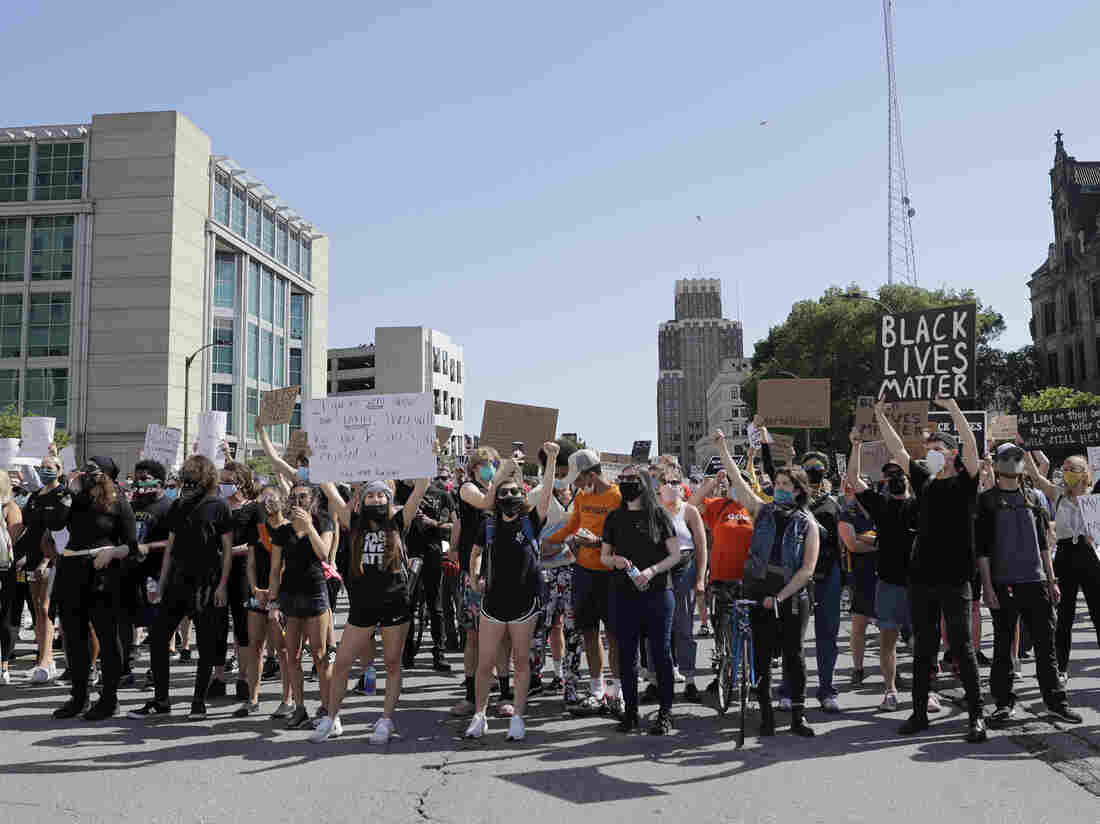 Protesters prepare to march in the streets on Monday in St. Louis. Jeff Roberson/AP hide caption 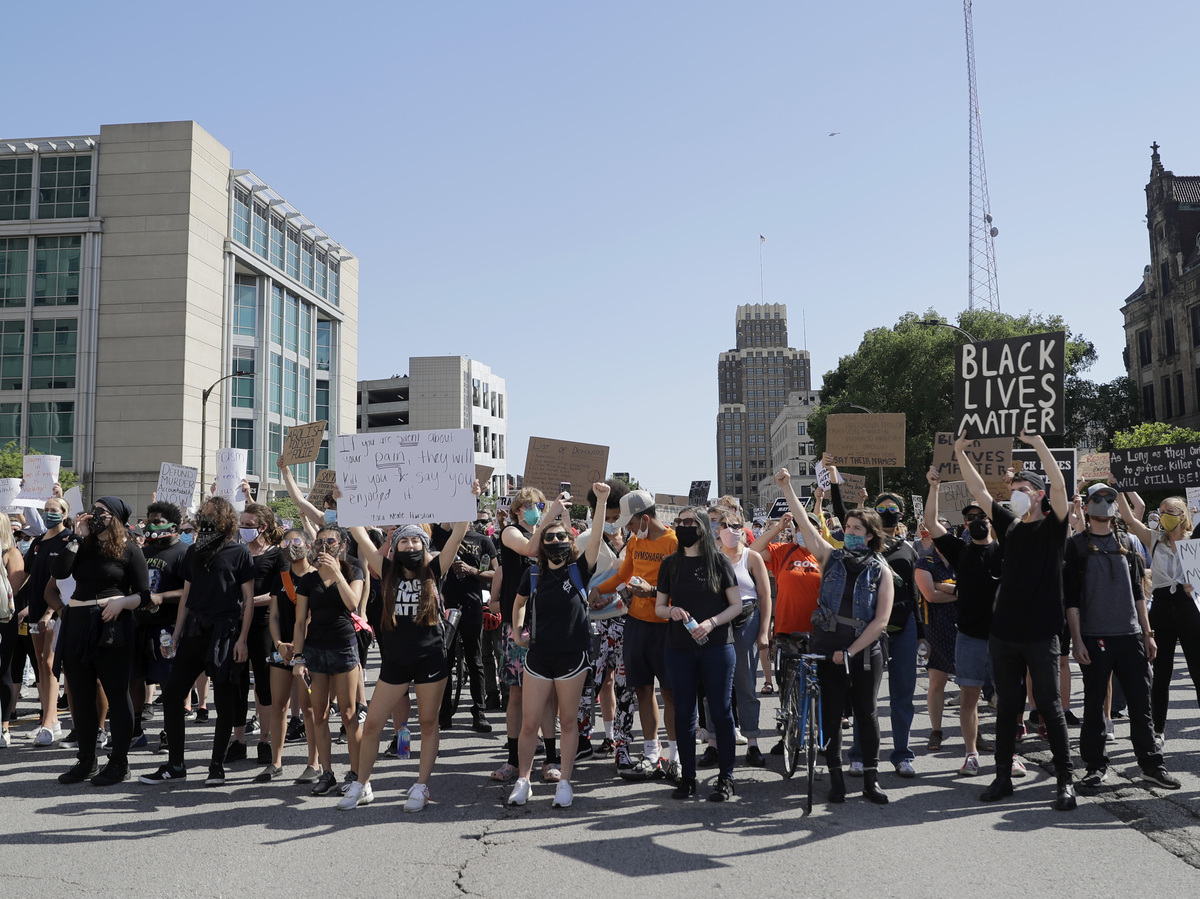 Protesters prepare to march in the streets on Monday in St. Louis.

Four police officers were shot and wounded during another night of unrest in St. Louis, according to the city's police chief, John Hayden.

In an emotional news conference, Hayden said the officers were hurt in an incident downtown following a day of peaceful protests that drew thousands into the city's streets.

Chief Hayden provides an update on 4 of our officers who were struck by gunfire tonight during the downtown unrest. https://t.co/Ml1CgIikHf

He said a couple hundred people "with no intention of protesting or doing anything constructive" remained late into the night, looting, vandalizing and throwing objects at police officers. Just after midnight, shots were fired at a line of officers, striking two in the leg, one in the foot and another in the arm, he said.

Hayden said none of the injuries were life-threatening.

Hayden called Floyd's death tragic but said what was happening in St. Louis was "mayhem."

"They're throwing fireworks on officers, fireworks were exploding on officers," he said. "They had officers that had gas poured on them. And you try to figure out what is going on. How can this be?" 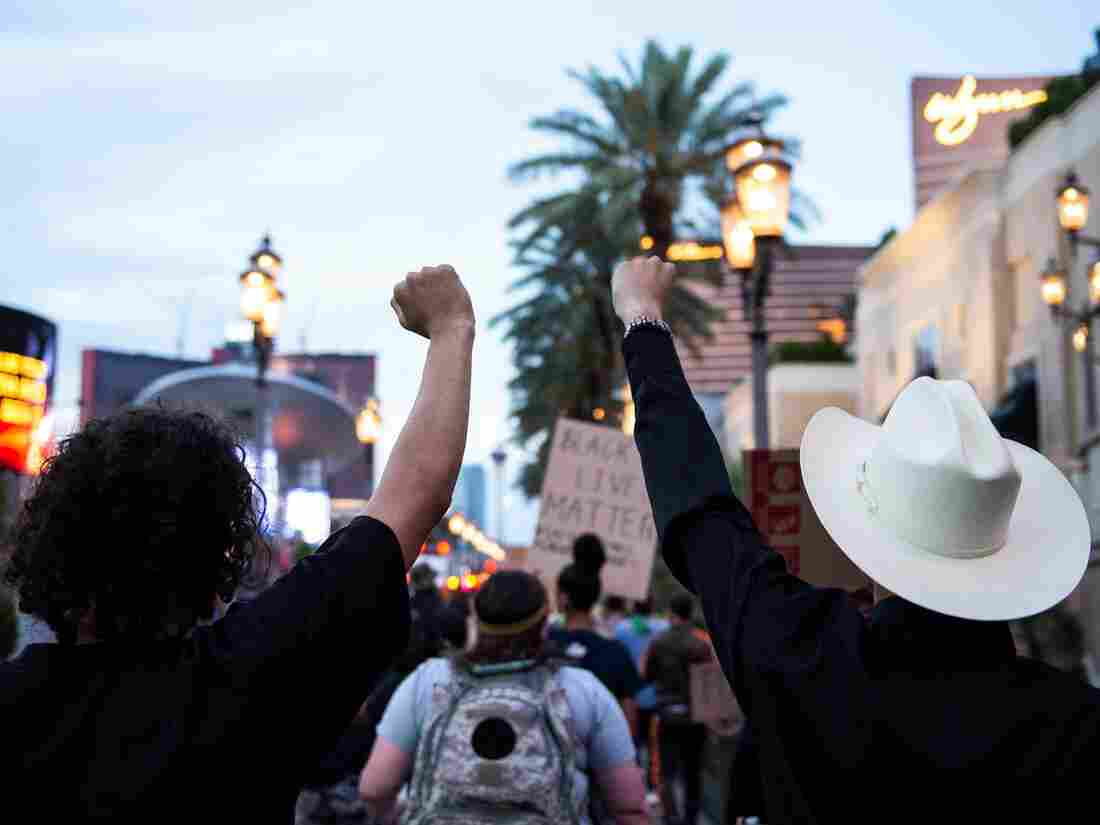 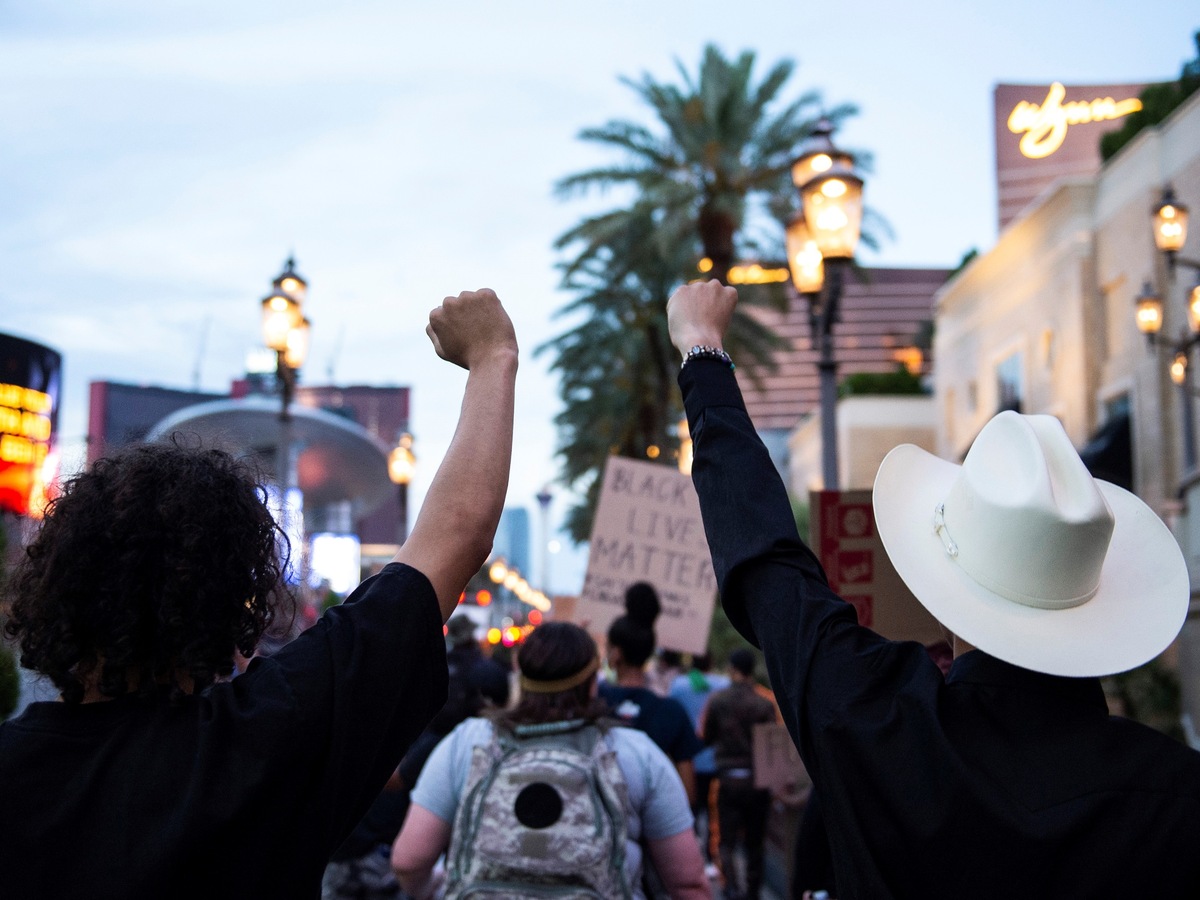 Protesters shout slogans and hold placards on Monday in downtown Las Vegas as they take part in a Black Lives Matter rally.

There were a pair of shootings overnight in Las Vegas, one of which left a police officer hospitalized and "in grave condition," according to Las Vegas Metropolitan Police Sheriff Joseph Lombardo.

The first incident took place in front of the famed Circus Circus Hotel and Casino as police said they were working to disperse protesters. Lombardo said rocks and bottles were being hurled at police.

"Officers were attempting to get some of the protesters in custody when a shot rang out and our officer went down," he said during an early Tuesday morning press briefing.

The unnamed officer was transported to a local hospital and is in critical condition, he said. A suspect is in custody.

The other incident took place shortly before midnight on Monday, when LVMPD and federal officers were guarding the Foley Federal Building and U.S. courthouse.

Lombardo said police encountered a man "who was armed with multiple firearms and appeared to be wearing body armor." Then, "officers engaged him" and "the suspect was struck by gunfire," Lombardo said. He was later pronounced dead.

It is unclear if the man was taking part in the protests prior to his deadly encounter with police.

Investigations into both incidents are ongoing.

"With these protests, which are leading to riots, one tragedy is only leading to another," Lombardo said. "What has occurred is utterly unacceptable. I hope the community sees it that way too."

Protesters gathered in downtown Omaha on Monday for the third consecutive night after Douglas County Attorney Donald Kleine ruled that a white bar owner who shot and killed a 22-year-old black Omaha protester on Saturday acted in self-defense.

Protesters carried signs with slogans such as "Hands up — don't shoot" and chanted "Black lives matter," according to Megan Feeney, a freelance journalist reporting for NPR member station NET in Omaha.

"A lot of black leaders were saying, 'Don't go downtown tonight, we need to reconsider our approach, think about how we can reorganize and want to avoid any useless violence, pain and potential death,' " Feeney said.

After the start of an 8 p.m. curfew, the protest had shrunk considerably, according to Feeney, and military vehicles blocked streets adjacent to the demonstration.

"Police started to advance and people started running. They ran down an alley, got blocked and some in the crowd started to throw water bottles and other objects while others yelled to stop," Feeney said. "Officers started closing in from all four directions and nobody could leave."

The Omaha Police Department reported two firearms arrests as well as an unspecified number of arrests for curfew violations. 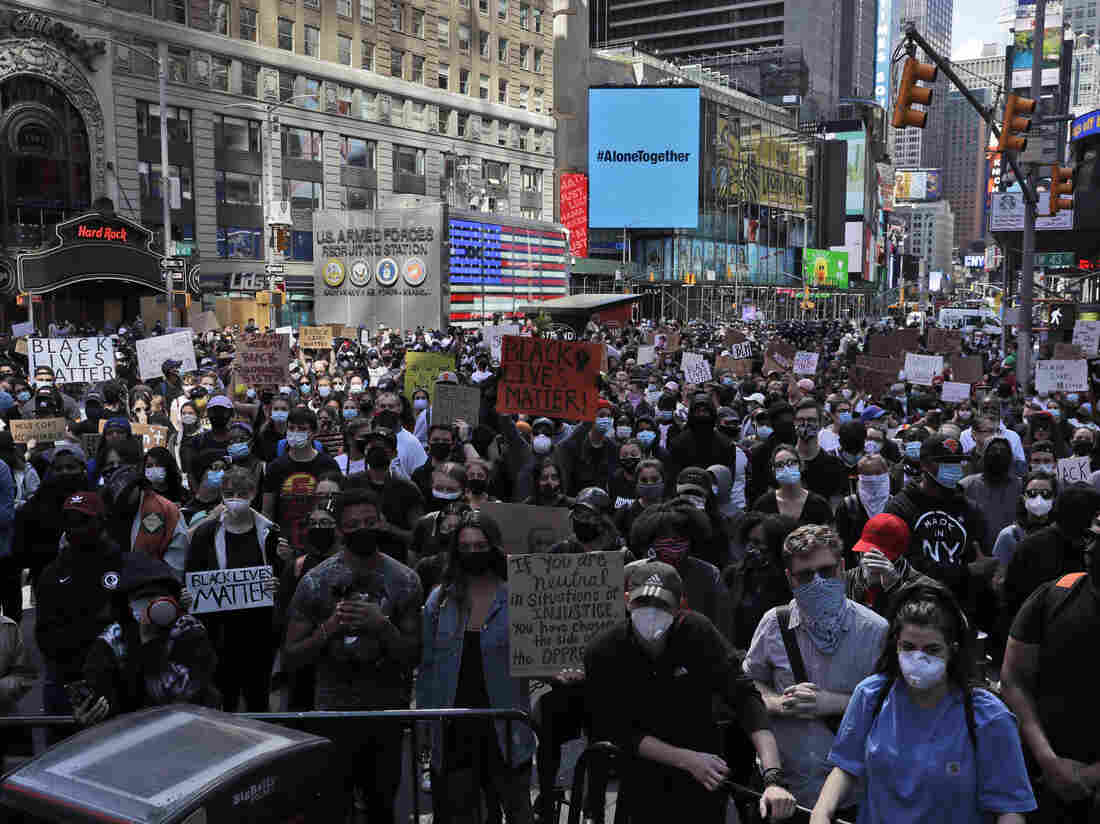 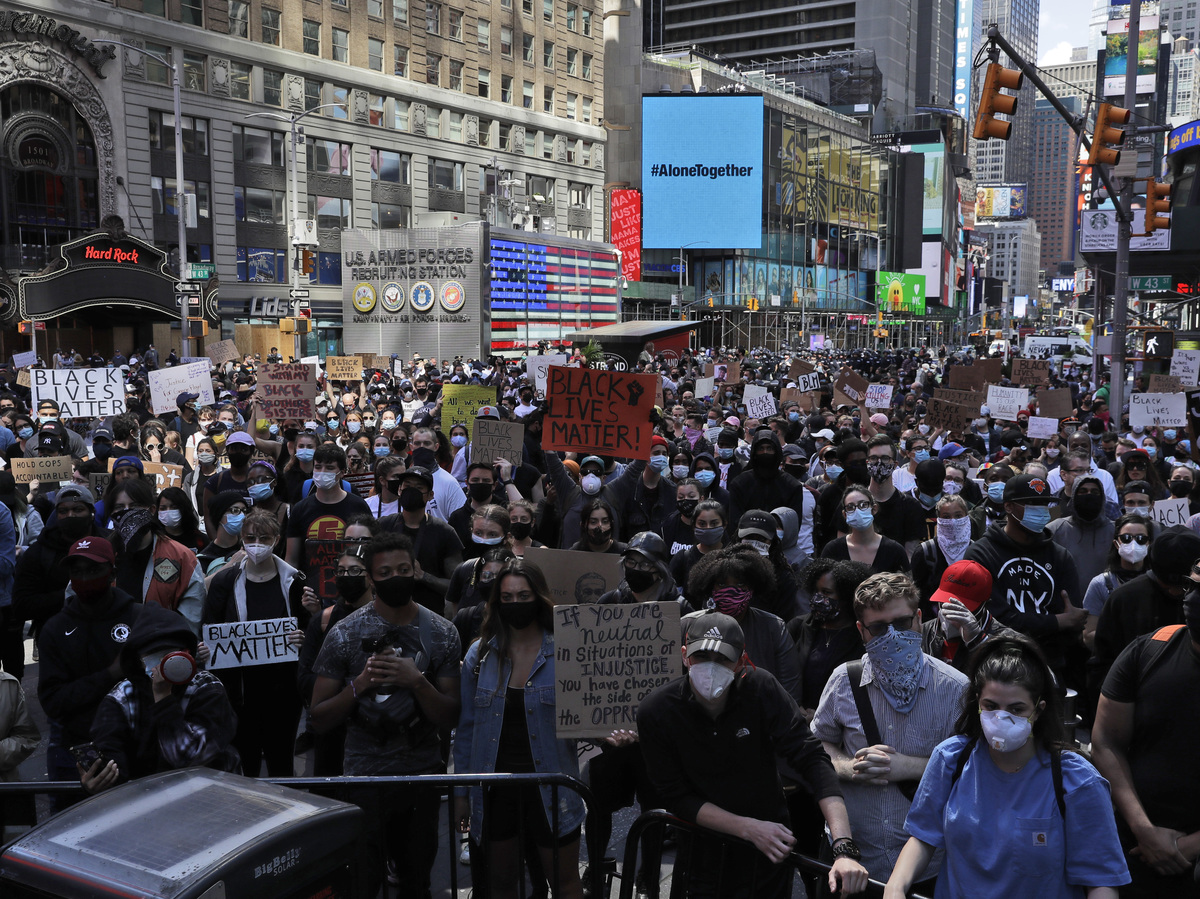 Protesters gather in Times Square before marching through the streets of Manhattan on Monday. New York City imposed an 11 p.m. curfew.

Protests were largely peaceful, though some looting was reported at a few luxury retailers, including Macy's flagship store in Manhattan.

In Buffalo, a city police officer and New York state trooper were struck by an SUV during a protest. The law enforcement officers were not seriously injured. It was unclear whether the driver intentionally struck the officers.

11:06PM, 6 minutes past the first curfew instituted by NYC since 1943 pic.twitter.com/QMmdqqSKnQ

We can confirm a member of the New York State Police was one of the members of law enforcement struck by a vehicle in Buffalo, NY tonight. The member is hospitalized with serious but non-life threatening injuries. 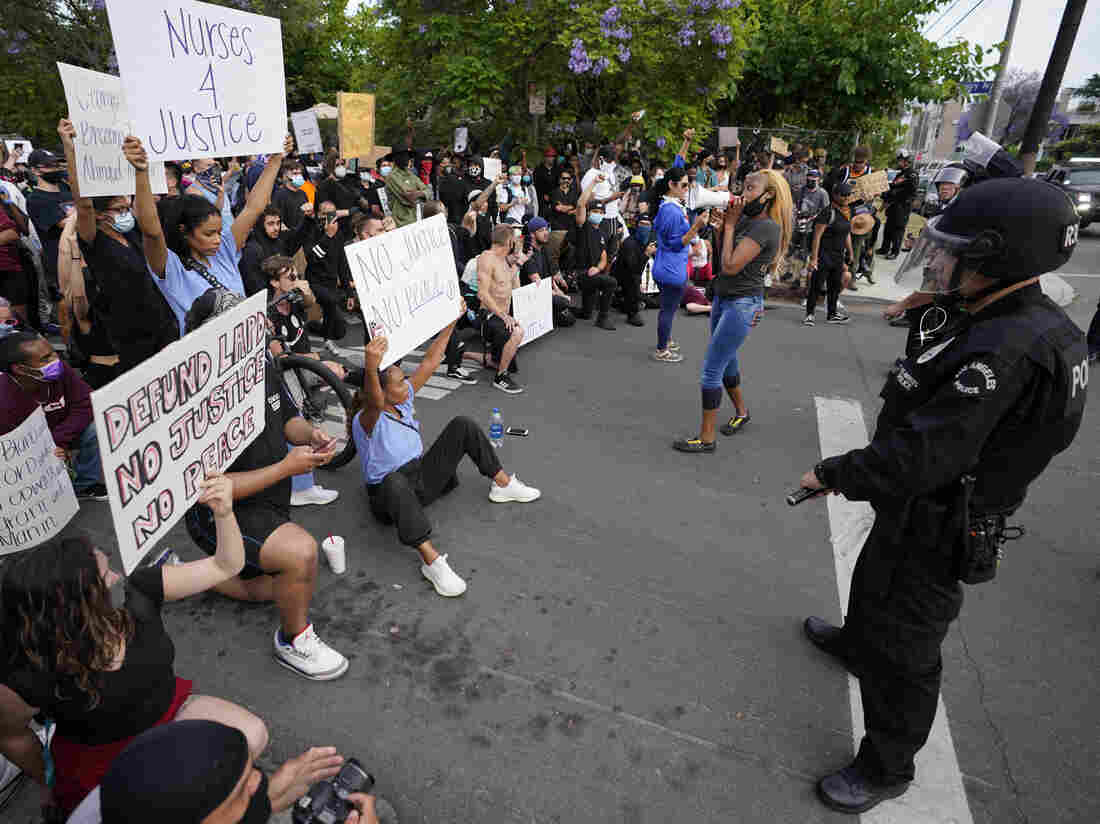 Demonstrators kneel when they are redirected by police officers on Monday in the Hollywood area of Los Angeles. Ashley Landis/AP hide caption 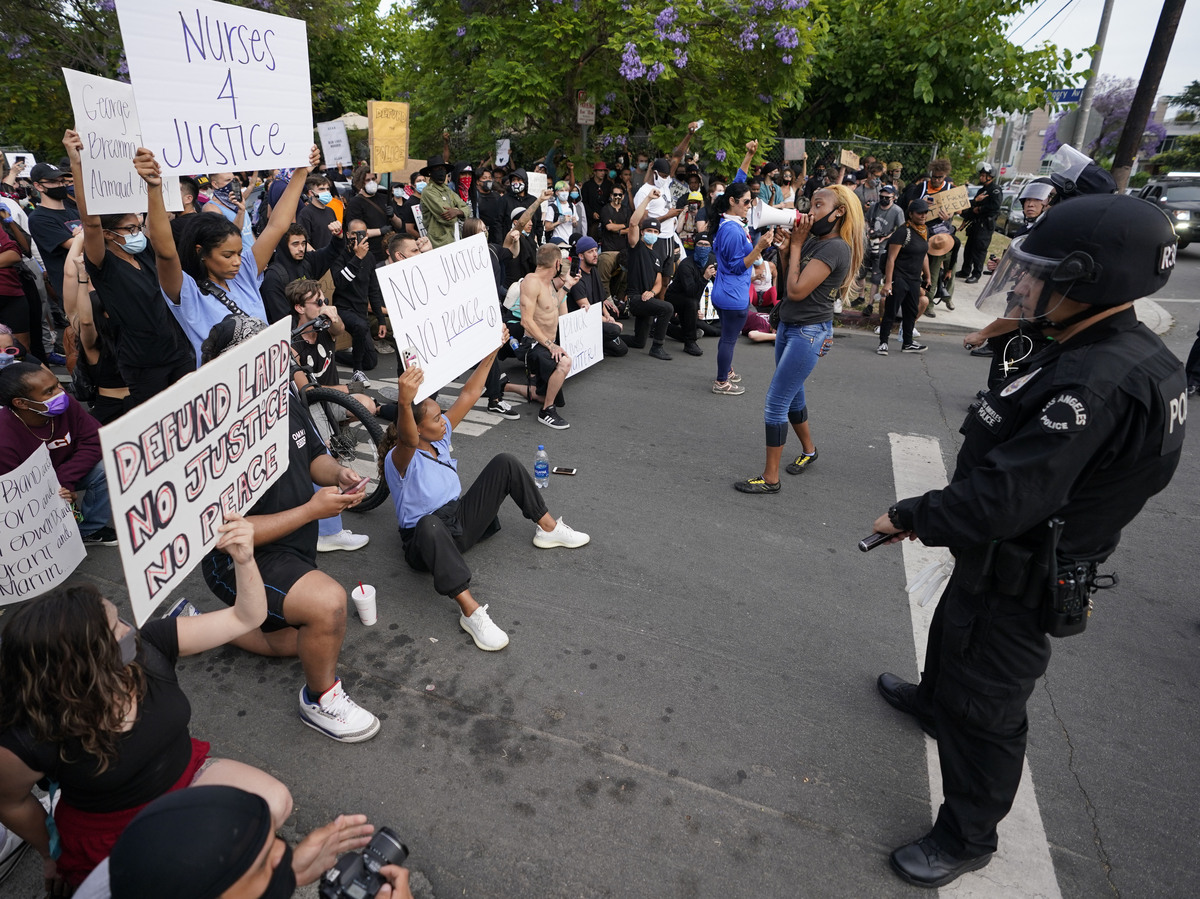 Demonstrators kneel when they are redirected by police officers on Monday in the Hollywood area of Los Angeles.

In Los Angeles, where some 700 people were arrested on Sunday, there was a heavy police presence in Hollywood and Van Nuys amid multiple protests, mostly peaceful.

But looting and vandalism in some areas along Van Nuys Boulevard prompted a response from officers, who fired bean bags. Authorities also responded to a fire at a strip mall, according to the Los Angeles Times.

Some 15,000 people marched peacefully in downtown Oakland, according to a police spokesperson quoted in the East Bay Times. Most dispersed prior to the start of the city's 8 p.m. to 5 a.m. curfew. More than 40 people were arrested for violating the curfew, according to the Oakland Police Department.

The Alameda County Sheriff's office tweeted late Monday, "Over 100 people arrested so far. It is time to go home."

In nearby Walnut Creek, several hundred protesters, mostly teenagers and young people, walked onto Interstate 680, according to the East Bay Times. Police in riot gear ordered them to disperse before chasing them with dogs, firing tear gas and rubber bullets, the newspaper said. Police said some protesters had vandalized a handful of vehicles, according to NPR member station KQED.

More than a dozen San Francisco Bay Area jurisdictions have imposed curfews in the wake of protests sparked by Floyd's death.

A previous version of this story incorrectly reported that 15,000 people marched on Interstate 680 in Walnut Creek, Calif., and were dispersed by police. The correct figure is several hundred.

The march by 15,000 people was peaceful and took place in Oakland, Calif.