Accessibility links
Governors Push Back On Trump's Threat To Deploy Federal Troops To Quell Unrest In a Rose Garden address and on a conference call with governors on Monday, the president threatened to send troops to states that didn't crack down sufficiently on demonstrations. 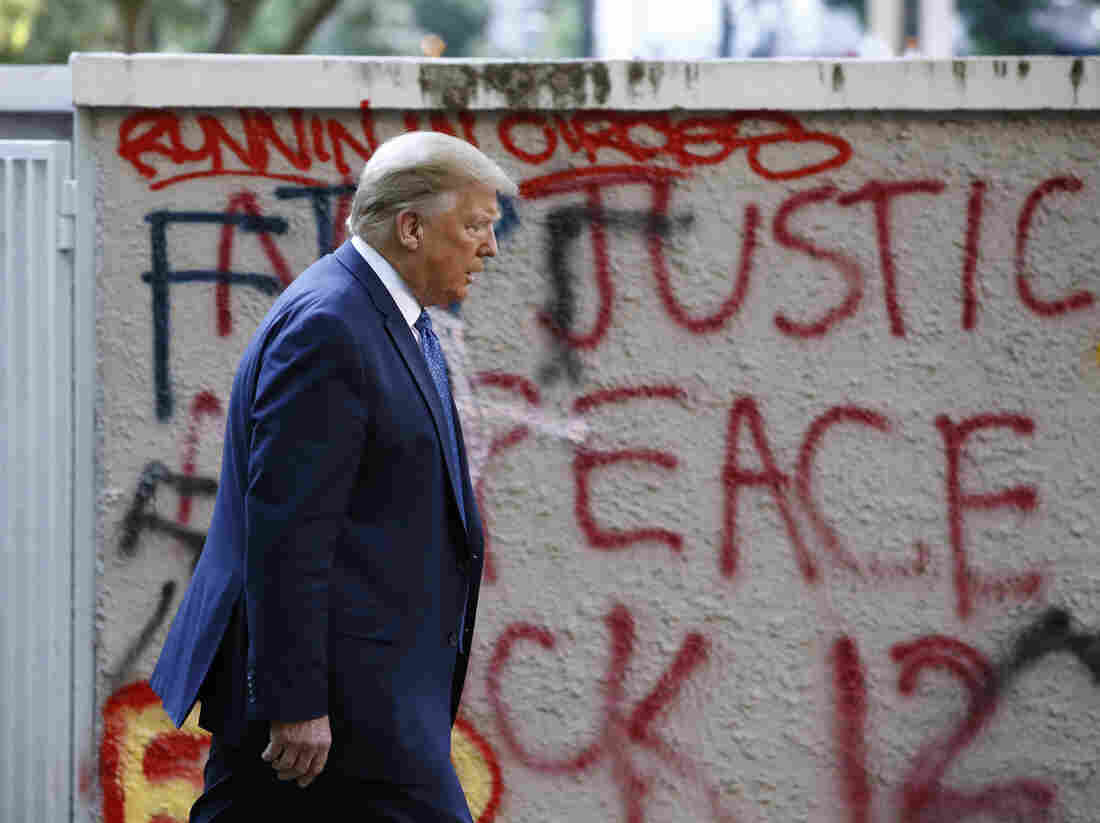 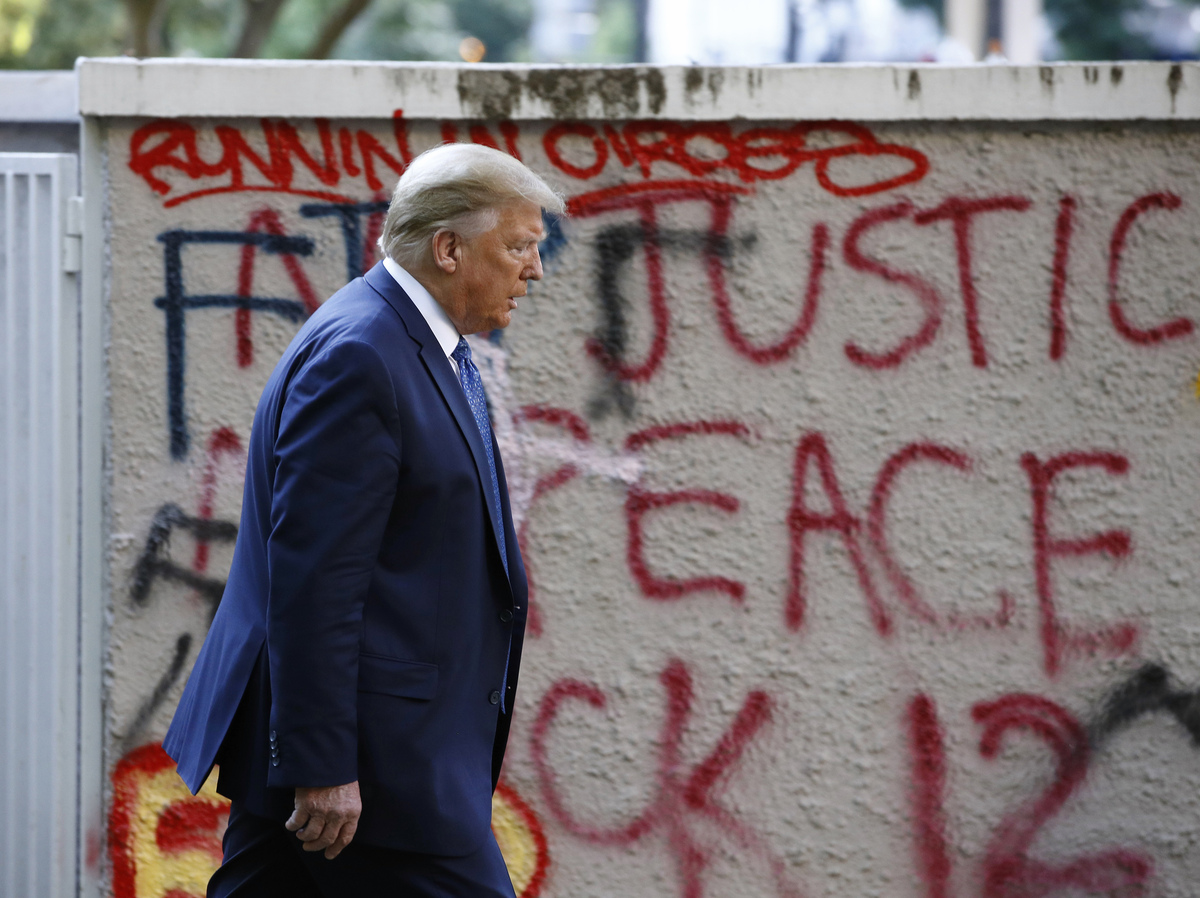 President Trump walks past protest graffiti in Lafayette Park, near the White House, on his way to visit St. John's Church on Monday.

President Trump, in a conference call Monday with the nation's governors, threatened to deploy the U.S. military to restore order unless states hit by days of unrest "put down" violent demonstrations, urging leaders to "dominate" lawbreakers or risk looking like "a bunch of jerks."

The upbraiding from the White House didn't sit well with many governors, who have been busy responding to clashes between protesters and law enforcement in dozens of U.S. cities sparked by the death a week ago of George Floyd after a Minneapolis police officer knelt on his neck.

Trump took a tough line with the governors, saying he was putting Attorney General William Barr in charge of the federal law enforcement response. The president said the White House was "strongly looking for arrests."

"You have to arrest people and you have to try people. And they have to go to jail for long periods of time," the president said.

"If people are running amok, you have to dominate. If you aren't dominating, you're wasting your time," he said. "They're going to run over you; you're going to look like a bunch of jerks."

"It's a movement. If you don't put it down, it will get worse and worse," Trump said. "The only time it's successful is when you're weak and most of you are weak."

The call followed yet another night of unrest Sunday over the May 25 death of Floyd and came on the same day that the president in a Rose Garden address urged governors deploy National Guard troops to quell the unrest.

"If a city or state refuses to take the actions that are necessary to defend the life and property of their residents, then I will deploy the United States military and quickly solve the problem for them," he said.

In the nation's capital, where U.S. Secret Service uniformed officers, military police and other law enforcement on Monday fired tear gas on peaceful protesters outside of the White House, Trump said he was already "dispatching thousands and thousands of heavily armed soldiers, military personnel and law enforcement officers to stop the rioting, looting, vandalism, assaults and the wanton destruction of property."

While some governors, such as South Carolina's Henry McMaster, a Republican, praised Trump's calls for a crackdown, others took umbrage at the president's combative tone and questioned his authority to unilaterally deploy federal troops to the states.

During the conference call, Illinois Gov. J.B. Pritzker, a Democrat, warned the president that the "rhetoric coming out of the White House is making it worse," to which Trump snapped back, "I don't like your rhetoric that much either."

"I had to speak up, and I told him that his rhetoric is inflaming matters, that it's making things worse, and that we need to call for police reform," Pritzker told NPR's Morning Edition on Tuesday. "We need to call for calm, that that's what the president should do and we need national leadership in this regard."

"He unfortunately — you know," the governor added, "he reacted badly."

Pritzker also said that what Trump's suggesting is "illegal."

"The governor of a state has to ask for federal help. I don't know any governor that intends to do that," he said. "And secondly, you know, you can hear in his rhetoric that he is simply trying to make himself sound like a strong man — almost like a dictator, as if he's going to be responsible for bringing order all the way."

In Michigan, where police and protesters have skirmished in Grand Rapids despite many demonstrations remaining peaceful, Gov. Gretchen Whitmer, a Democrat, called the president's remarks "dangerous" and said they should be "gravely concerning to all Americans."

The president's comments, she said, "send a clear signal that this administration is determined to sow the seeds of hatred and division, which I fear will only lead to more violence and destruction."

"We must reject this way of thinking. This is a moment that calls for empathy, humanity, and unity," Whitmer said in a statement. "This is one of the most challenging periods in our nation's history, but as Americans, we must remember our enemy is racial injustice, not one another."

The Republican governor of Massachusetts, Charlie Baker, said he wasn't surprised by the president's "incendiary words."

"At so many times during these last several weeks, when the country needed compassion and leadership the most, it simply was nowhere to be found," he said following the phone call with Trump.

Washington Gov. Jay Inslee, a Democrat, called the president's remarks the "rantings of an insecure man trying to look strong after building his entire political career on racism."

On the subject of the deploying of federal troops, Democratic New York Gov. Andrew Cuomo told CNN that he would respond to such an offer by saying, "Thank you, but no thank you."

Beshear says he was not on the call with President Trump this morning, but instead was talking with Tamika Palmer, Breonna Taylor's mother.

Trump reportedly urged governors to crack down on protesters, saying "you have to dominate," per @CBSNews account of obtained audio.

Kentucky Democratic Gov. Andy Beshear was reportedly not on the call with the president. Beshear was instead talking with the mother of Breonna Taylor, a 26-year-old African American resident of Louisville who was killed in March by police executing a no-knock warrant.

The president did praise one Democratic governor for his response to the unrest — Minnesota's Tim Walz, who fully mobilized National Guard troops on Saturday to supplement law enforcement.

But at another point in the call, Trump called Minnesota "a laughingstock all over the world."

Walz said Monday that he responded by saying: "No one's laughing here. We're in pain. We're crying. We saw a man lose his life in front of them and our challenge is that this is about social trust, social compacts and reestablishing faith in the people who are there to serve them."