Accessibility links
Confederate Monument Being Removed After Birmingham Mayor Vows To 'Finish The Job' In Birmingham, Ala., protesters had felled one monument and were targeting another when Randall Woodfin stepped in, saying he'd ensure it came down. Still, its permanent removal is in question. 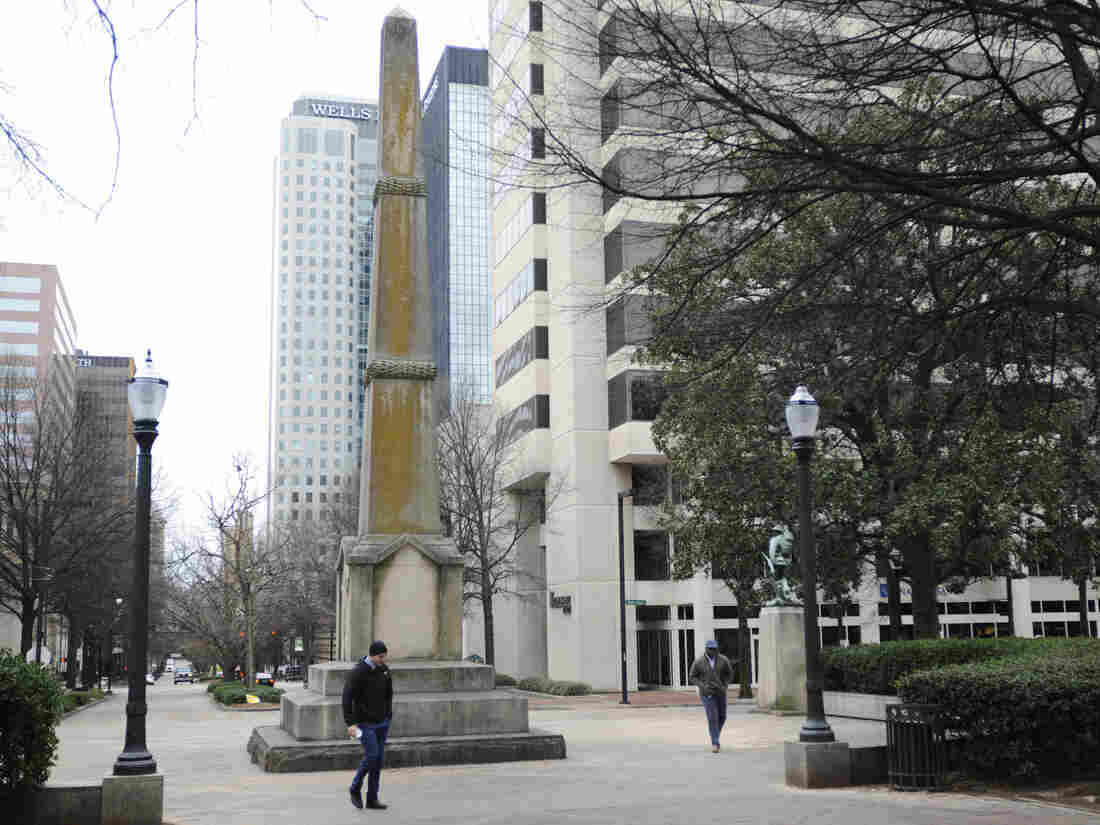 The Confederate Soldiers and Sailors Monument in Birmingham, Ala., seen here in 2016, has been the subject of legal controversy in recent years. Jay Reeves/AP hide caption 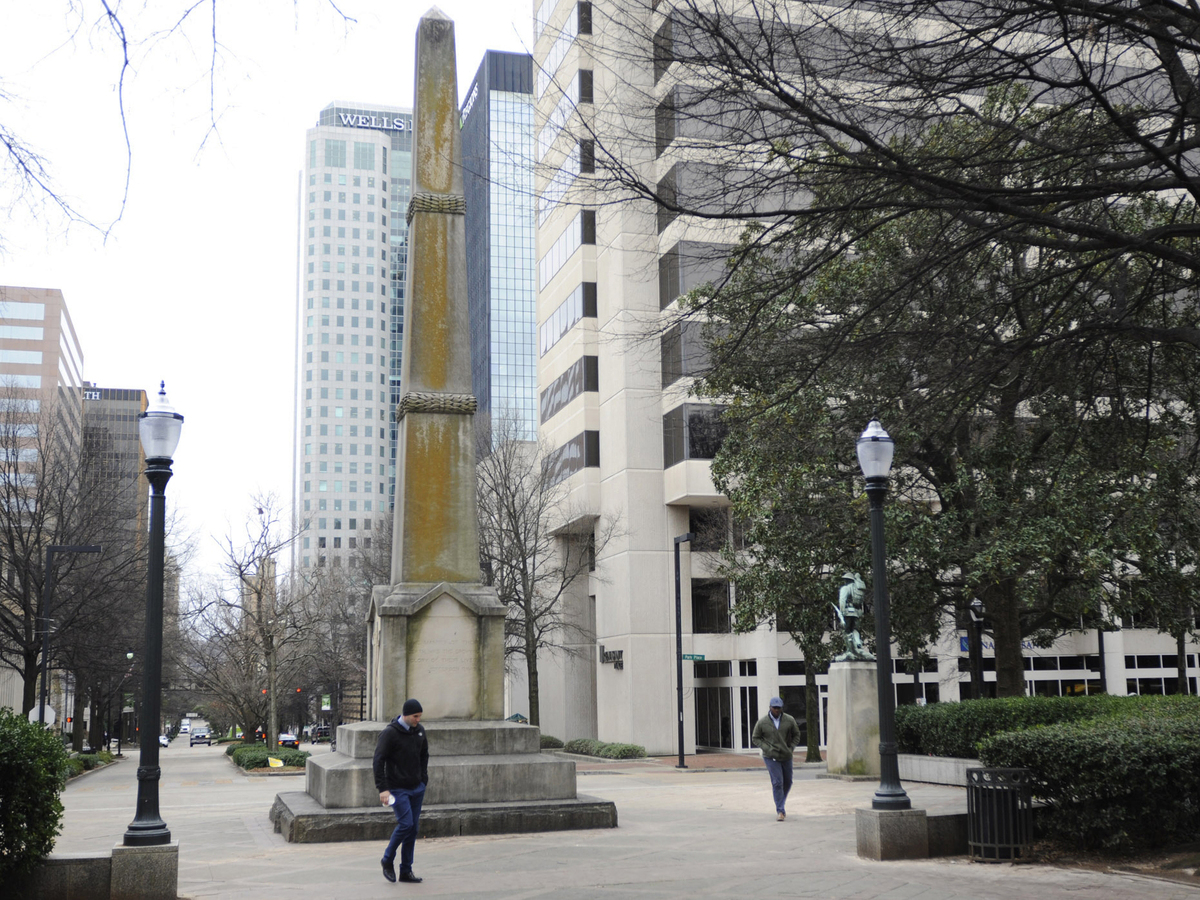 The Confederate Soldiers and Sailors Monument in Birmingham, Ala., seen here in 2016, has been the subject of legal controversy in recent years.

Piece by piece, authorities overnight began pulling down a five-story-tall monument to Confederate troops that has stood for more than a century in Birmingham, Ala.

By the time the workers paused Tuesday morning, little was left of a spire that had become a lightning rod for controversy in recent years and a focal point for local protesters outraged by George Floyd's death last week in Minneapolis.

On Sunday, the obelisk — known formally as the Confederate Sailors and Soldiers Monument — was the site of a speech from Birmingham Mayor Randall Woodfin, who pleaded with the crowd.

Some protesters had already vandalized the monument and toppled another statue in the park, that one of former Confederate officer Charles Linn. 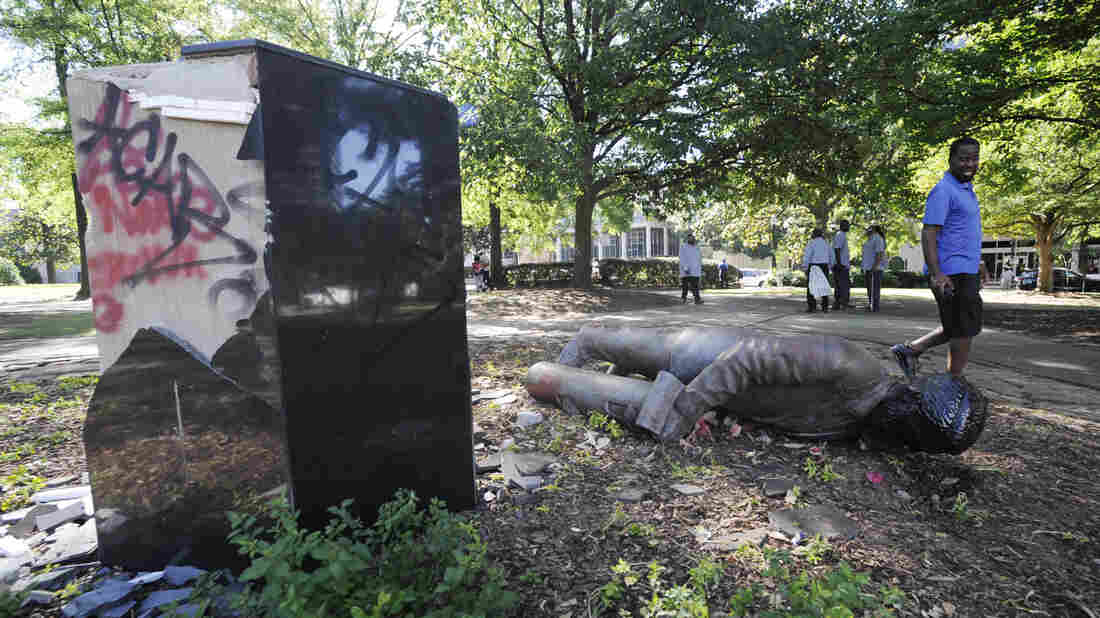 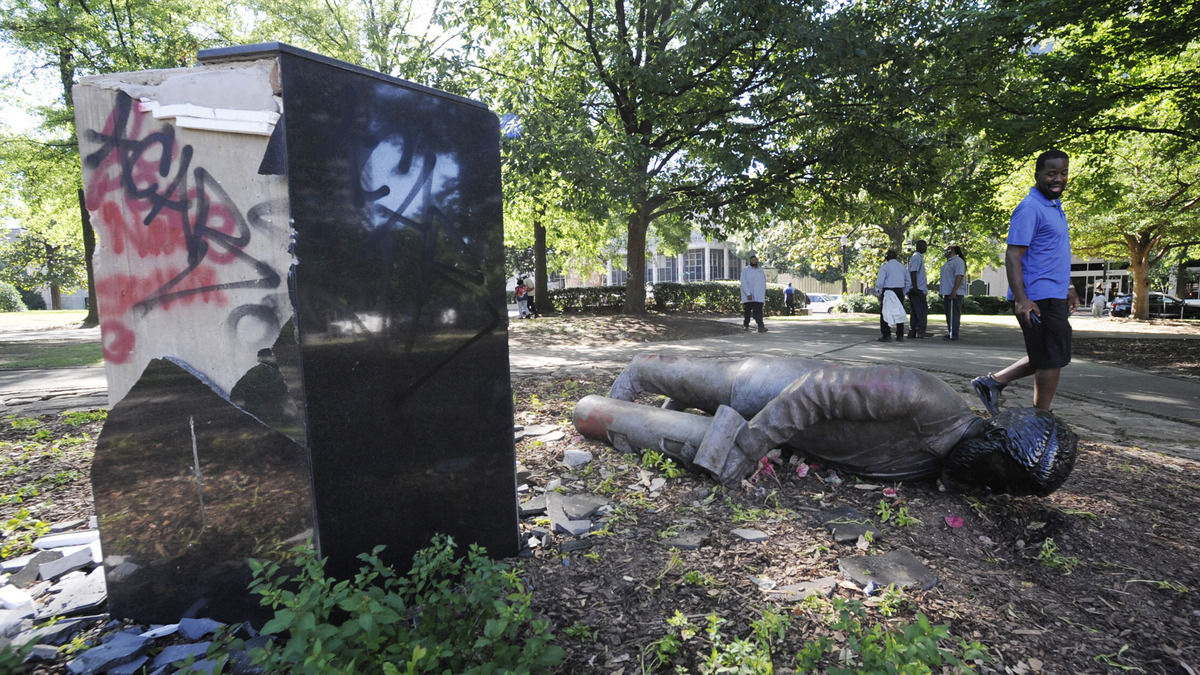 A statue of Charles Linn, a onetime Confederate officer and a founder of Birmingham, sits toppled Monday. The statue fell after unrest in Birmingham following George Floyd's death.

Woodfin asked that demonstrators refrain from trying to tear down the much larger monument — so that his government could do it instead.

"Allow me to finish the job for you," the mayor told a crowd behind his mask and a megaphone. And he persuaded them to give him until midday Tuesday to pull the monument down.

"I wanted you to hear it directly from me. But I need you to stand down."

On Monday, Woodfin declared a state of emergency and implemented a curfew for the city, citing the previous night's protests during which police arrested at least two dozen people.

Birmingham isn't the only city reckoning with its Confederate past in the aftermath of Floyd's death.

Since the release of a video showing the black man's arrest in Minneapolis, during which a white officer plants a knee on Floyd's neck, protesters in several cities and towns below the Mason-Dixon Line have directed their frustration — and sometimes vandalism — toward local Confederate monuments.

In Alexandria, Va., a statue commemorating Confederate soldiers came down Tuesday morning. It was removed a month earlier than scheduled by the United Daughters of the Confederacy due to fears of vandalism, according to The Washington Post.

Alexandria, like all great cities, is constantly changing and evolving. pic.twitter.com/CZTjlOkpfT

This week's move likely isn't the final chapter in the Birmingham monument's story, which was knotty well before the latest spasm of unrest trained attention back on it.

But Alabama Attorney General Steve Marshall sued the city, citing a violation of a state law, the Alabama Memorial Preservation Act of 2017, which protects against the relocation or alteration of Confederate symbols that have been up for more than four decades.

A unanimous state Supreme Court decision last fall sided with the monument's supporters, bringing the plywood down and assessing a fine of $25,000 against the city of Birmingham.

Now Marshall has threatened another lawsuit over the city's move.

"Should the City of Birmingham proceed with the removal of the monument in question, based upon multiple conversations I have had today," the attorney general said in a statement issued Monday, "city leaders understand I will perform the duties assigned to me by the [Alabama Memorial Preservation] Act to pursue a new civil complaint against the City."