Accessibility links
'He Did Not Pray': Fallout Grows From Trump's Photo-Op At St. John's Church "He did not offer a word of balm or condolence to those who are grieving," says the bishop who oversees the church. Washington's mayor was more direct: "Shameful!" 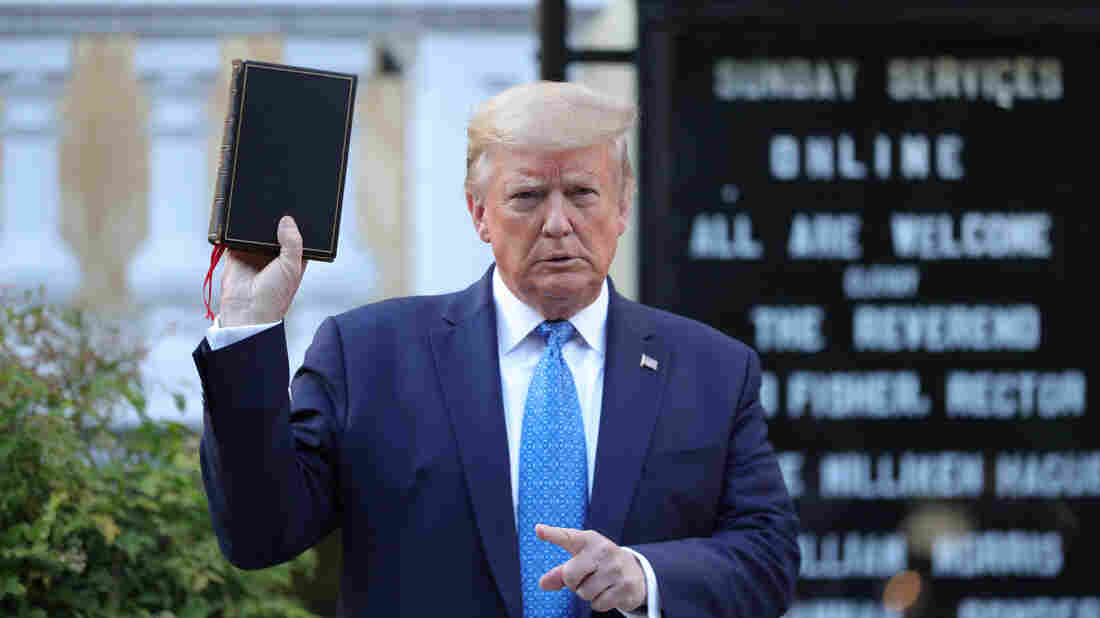 President Trump's photo opportunity in front of St. John's Episcopal church in Washington has set off criticism, as law enforcement used tear gas and force to clear a path for him to walk from the White House. Tom Brenner/Reuters hide caption 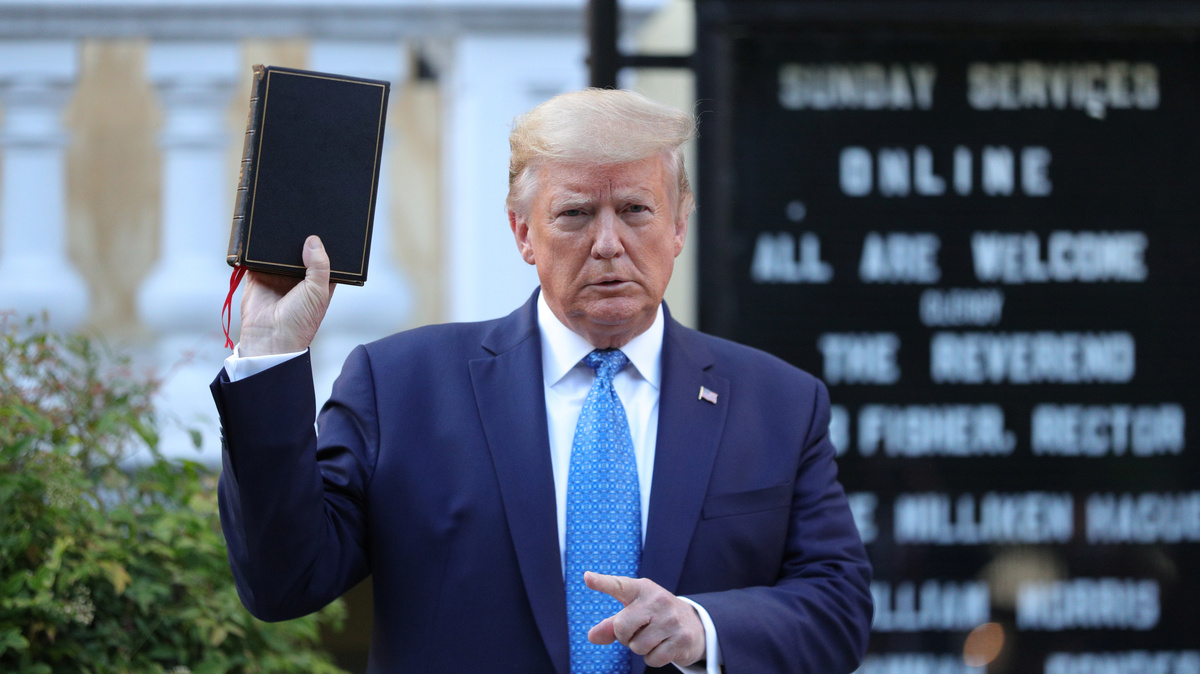 President Trump's photo opportunity in front of St. John's Episcopal church in Washington has set off criticism, as law enforcement used tear gas and force to clear a path for him to walk from the White House.

President Trump's controversial foray to St. John's Church on Monday is generating widespread criticism, after police and National Guard troops physically cleared out demonstrators, using tear gas, to allow a photo opportunity outside the church. The bishop who oversees St. John's is among the critics.

"He used violent means to ask to be escorted across the park into the courtyard of the church," Bishop Mariann Edgar Budde of the Episcopal Diocese of Washington tells NPR's Morning Edition. "He held up his Bible after speaking [an] inflammatory militarized approach to the wounds of our nation."

"He did not pray," the bishop continued.

"He did not offer a word of balm or condolence to those who are grieving. He did not seek to unify the country, but rather he used our symbols and our sacred space as a way to reinforce a message that is antithetical to everything that the person of Jesus, whom we follow, and the gospel texts that we strive to emulate ... represent."

Every president since James Madison has visited St. John's Church, which opened in 1816 and sits across the park from the White House. Despite that longstanding relationship, Budde says her diocese had no warning of Monday's visit.

"There was no reaching out, no sense that it would require some sort of authorization before using the church as a backdrop in that way," Budde told NPR's Tom Gjelten hours after the incident.

The president had used the Bible, and her church, as a prop, she said.

"I was outraged that he felt that he had the license to do that, and that he would abuse our sacred symbols and our sacred space in that way," the bishop told Gjelten.

Within hours, the White House had assembled footage of the brief outing into a triumphant video that shows the president pumping his fist as he strides past a row of riot police, culminating in him standing in front of the church. Set to swelling orchestral music, the video shows nearly no sign of the destruction and debris that days of intense protests have wrought near the White House.

The federal force used against the demonstrators nearly 30 minutes before the curfew began incensed Mayor Muriel Bowser. "Shameful!" Bowser said via Twitter, saying that after "federal police used munitions on peaceful protestors in front of the White House," the city's police force's job of keeping the peace would be made more difficult.

I imposed a curfew at 7pm. A full 25 minutes before the curfew & w/o provocation, federal police used munitions on peaceful protestors in front of the White House, an act that will make the job of @DCPoliceDept officers more difficult. Shameful!

"While live on air, Myers was struck in the chest by a riot shield and Brace was clubbed with a police baton," Australia's 7NEWS reports.

"Our Ambassador should be certainly making representations on behalf of these Australians who effectively been assaulted...for doing their job" - Leader of the @AustralianLabor Party @AlboMP speaking after @Channel7 journalist & cameraman were hit. https://t.co/rCG56KbYRw #7NEWS pic.twitter.com/CUslYLfYes

Brace tells Australia's ABC that she repeatedly identified herself as a journalist as officers quickly closed in on them during the rush to clear a path for Trump.

"Despite that as I ran away, clearly stating that we were media, with my cameraman with a camera on his shoulders, I was hit across the back with the baton," she says. "We were then fired upon by the National Guard with those rubber bullets, who are the exact people I had shown my media pass to ... and then we ended up getting tear-gassed."

The situation, she said, was "absolutely terrifying."

"I also managed to get a rubber bullet to the backside, and Tim got one in the back of the neck, so we'll have a few bruises tomorrow — but we're feeling perfectly safe," Brace says.

Shock and anger over the incident led U.S. Ambassador to Australia Arthur B. Culvahouse Jr. to issue a statement saying, "Freedom of the press is a right Australians and Americans hold dear. We take mistreatment of journalists seriously, as do all who take democracy seriously."

Trump's use of force to allow him to walk across the park has also prompted Arlington County, Va., to pull its police officers out of the nation's capital.

The county had sent a police contingent to help keep peace in Washington. But it says the officers were put in a dangerous position that exposed them and others to risk "for a purpose not worthy of our mutual aid obligations."

The church has suffered damage during the unrest in Washington against police violence, including a fire that was lit in its basement. While Budde is thankful to first responders who put out that fire, she says she wants the focus to remain on the death of George Floyd and others who have died at the hands of police.

"I want to acknowledge the loss of property, but in no way equate it with the loss of life," she said. "I want to be a church that stands in solidarity with those who are making peaceful protest."

An earlier version of this Web story mistakenly said that President Trump walked to St. John's Church nearly 30 minutes before Washington's 7 p.m. curfew began. In fact, he walked there a few minutes after the curfew began.