Accessibility links
North Carolina Governor Says RNC Should Plan On Scaling Back After Gov. Roy Cooper insisted on a scaled-back event, President Trump shot back saying he is "still in Shelter-In-Place Mode," 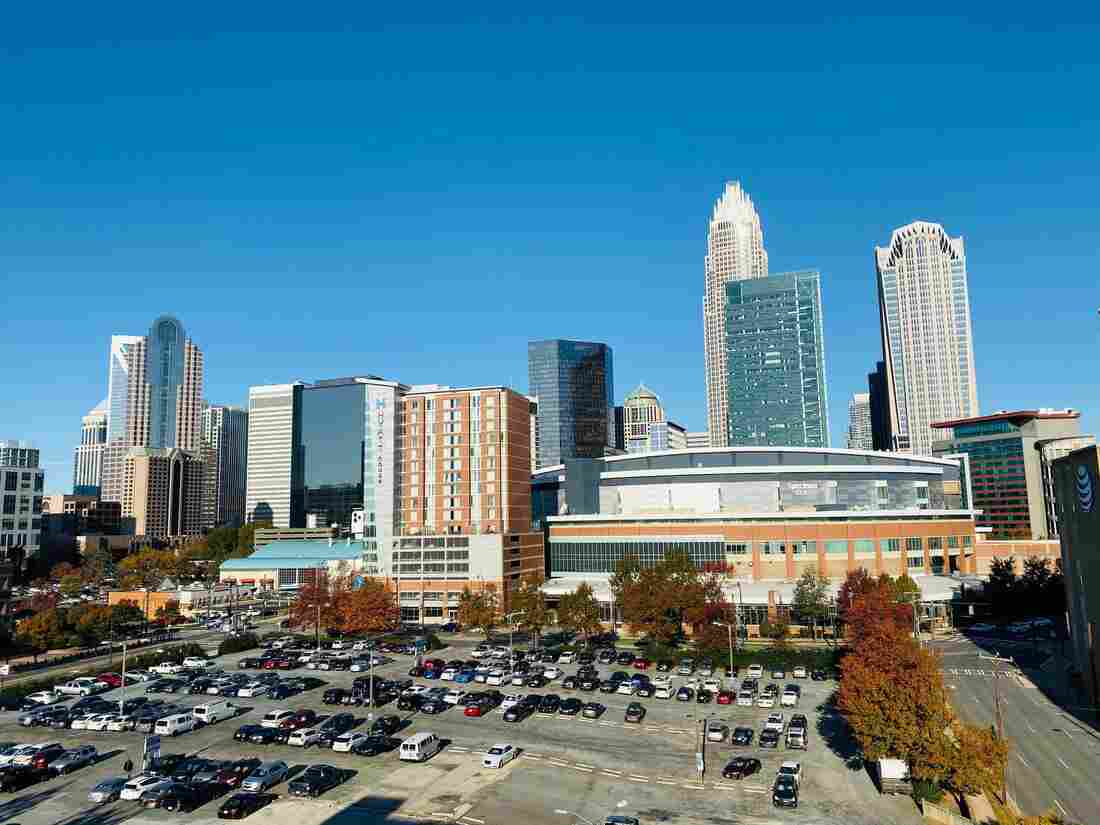 Charlotte's Spectrum Center is scheduled to host the 2020 Republican National Convention, but GOP officials are insisting on a full arena while state public health officials say it's not safe to have so many people together in a pandemic. Daniel Slim/AFP via Getty Images hide caption 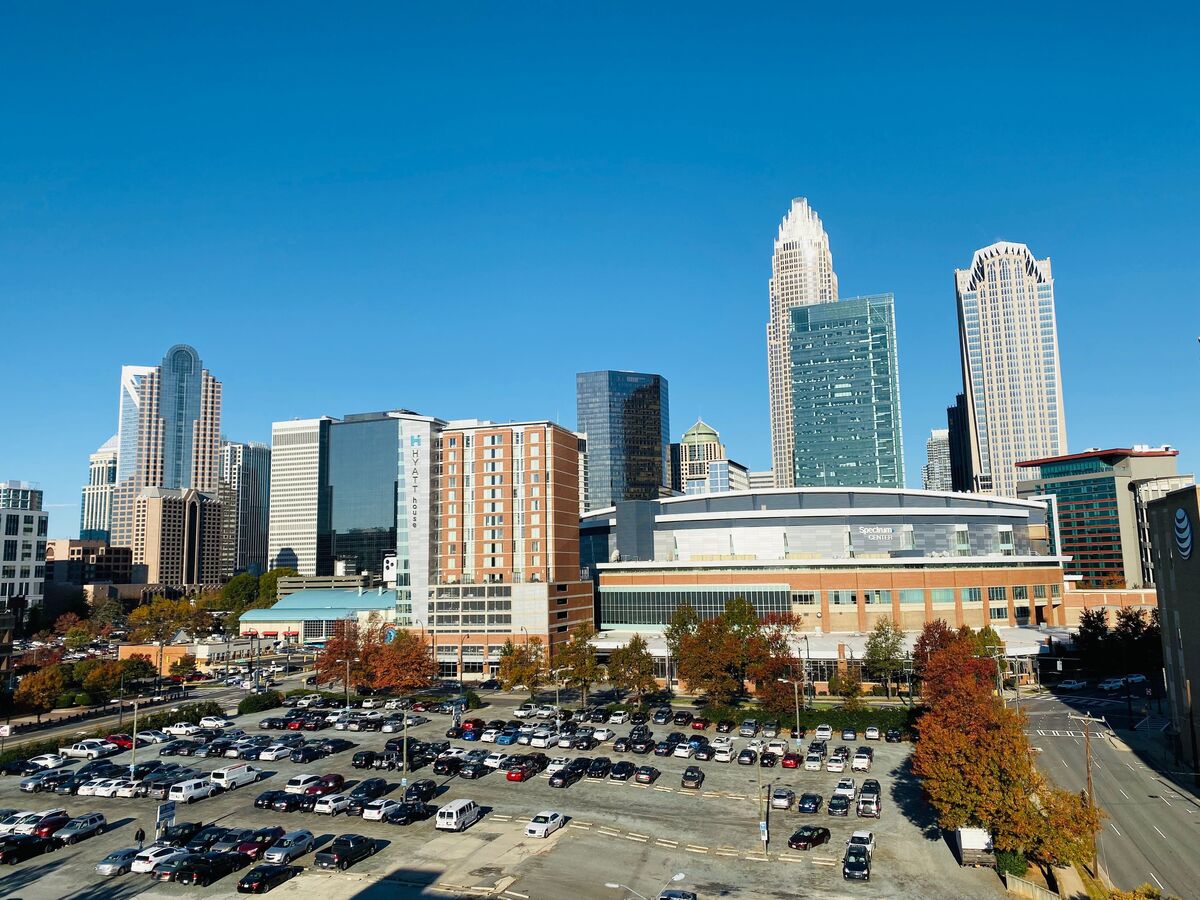 Charlotte's Spectrum Center is scheduled to host the 2020 Republican National Convention, but GOP officials are insisting on a full arena while state public health officials say it's not safe to have so many people together in a pandemic.

North Carolina Gov. Roy Cooper, a Democrat, said Tuesday that it's "very unlikely" the state can permit a packed Republican National Convention in Charlotte to go forward this summer.

"The people of North Carolina do not know what the status of COVID-19 will be in August, so planning for a scaled-down convention with fewer people, social distancing and face coverings is a necessity," Cooper wrote Republican National Committee Chairwoman Ronna McDaniel.

President Trump shot back Tuesday evening on Twitter, saying Cooper is "still in Shelter-In-Place Mode," and "we are now forced to seek another State to host the 2020 Republican National Convention."

...millions of dollars, and jobs, for the State. Because of @NC_Governor, we are now forced to seek another State to host the 2020 Republican National Convention.

An RNC official said Tuesday that it still hopes to conduct the official business of the convention in Charlotte but that President Trump may make his acceptance speech in a different city.

After Trump threatened to move the convention last week, top GOP officials gave Cooper a deadline of Wednesday to specify the conditions under which the convention in the 19,000-seat Spectrum Arena could proceed.

The uncertainty over the convention's fate comes less than three months before the gathering in a state that Trump won in 2016 and is crucial to his reelection effort.

"We are happy to continue talking with you about what a scaled-down convention would look like and still await your proposed plan for that," continued Cooper, whose state is continuing to see an increase in COVID-19 hospitalizations.

In a statement Tuesday, McDaniel said Cooper was "dragging his feet" and said RNC officials would begin visiting other cities and states that have offered to host the convention. Among the places that have been floated as potential replacements are Atlanta; Jacksonsville, Fla.; Orlando, Fla.; and Nashville, Tenn.

The back-and-forth between the GOP and Cooper's administration is the latest turn in its two-year rocky relationship with the convention.

'We would rather be incinerated than seem small-time'

The fast-growing city — one of the nation's leading financial centers — bid on the convention because it wanted to be on the world stage.

The city's longing to be recognized goes back decades, said Bob Morgan, a former leader of the city's Chamber of Commerce.

GOP Officials Say They're Expecting 50,000 In Charlotte For Republican Convention

"We've long been ambitious like that," he said. "Someone once famously described us in the 1950s as saying that when the Russians launch missiles against the United States that if Charlotte's not on the list, we would be very disappointed. Because we would rather be incinerated than seem small-time."

That ambition — and insecurity — led to Charlotte hosting the Democratic National Convention in 2012 and to bid on Trump's renomination convention for this August.

But the mostly-Democratic city was embarrassed when it realized that no other municipality submitted a formal bid.

"I don't know where the quote comes from, but I know somebody said, 'There's a fool in every room and if you look around and can't find them, then maybe it's you,' " former City Council member Justin Harlow said in 2018, when the City Council voted 6-5 in favor of hosting. "It's important to ask why no other local government in America is bidding on this convention."

At the time, the debate over the convention focused on whether the city wanted to share the spotlight with the president's controversial policies, such as the separation of families at the U.S.-Mexican border.

Now the city's relationship with the GOP is further strained by the coronavirus pandemic and the sometimes-violent protests over the police killing of George Floyd in Minneapolis. Charlotte has had three nights of demonstrations that have resulted in at least 75 arrests and property damage to stores and offices.

For much of April and May, top Republicans, including McDaniel, said they were willing to hold a convention in line with Cooper's health mandates.

But Trump has expressed a desire for something different: a packed house with no face coverings or social distancing.

The RNC has proposed that convention attendees pass a pre-convention health screening and have their temperature checked before entering the arena. It also proposed having hand sanitizer available and cleaning areas where people gather.

Mandy Cohen, the state's top health official, indicated on Monday that the state will not green light a normal convention.

"What we know about the spread of this virus is if you are indoors, close together, without 6 feet apart and without face covering, then the virus spreads," she said.

While the Republican National Committee has threatened to move the convention, a spokesperson for the committee, Rick Gorka, said last week that Charlotte will still be the host site – either with 19,000 people inside the arena or 100.

"I saw that letter from the RNC and I thought there is still a big gap," Driggs said. "It really is a tough situation. You talk about a rock and a hard place. I don't see any satisfactory way out."

The city has already started buying police equipment to prepare for the RNC. The Justice Department is contractually obligated to reimburse the city from a $50 million security grant, but, as a businessman, Trump has a history of unpaid bills, while the Trump campaign has refused to pay police security costs in some cities where it has held rallies.

Driggs said the city would go to court if it's not paid back.

The uncertainty around the convention comes as the city's tourism and hospitality industries are suffering.

Last month's revenue at the downtown DoubleTree hotel was $125,000, compared with $800,000 a year ago, said general manager Bill DeLoache.

He wants the RNC to come but is worried the two sides are too far apart.

"It was very disheartening, and I finally quit listening to the news because neither side really seemed to want to make it want to work," he said.

Democratic city council member Malcolm Graham says most emails and phone calls he receives from constituents are against hosting.