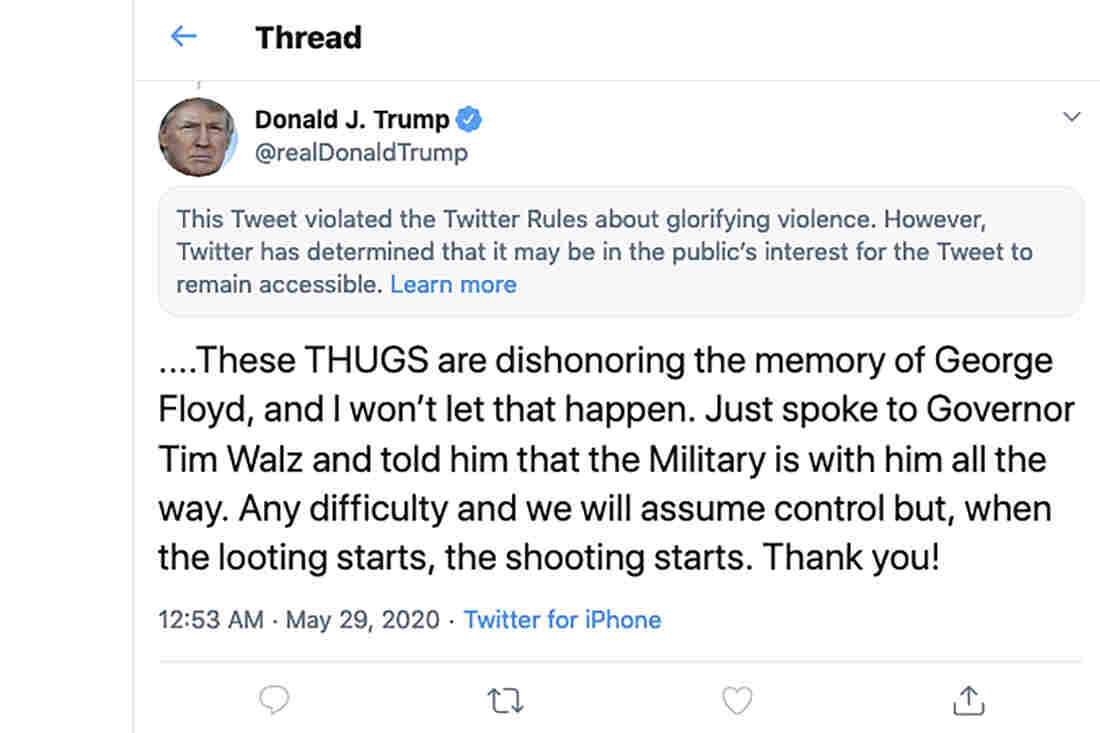 This image from the Twitter account of President Donald Trump shows a tweet he posted on May 29, after protesters in Minneapolis. On Tuesday, the Center for Democracy and Technology sued Trump over the president's executive order aimed at limiting a legal protection long enjoyed by tech companies like Twitter. Twitter via AP hide caption 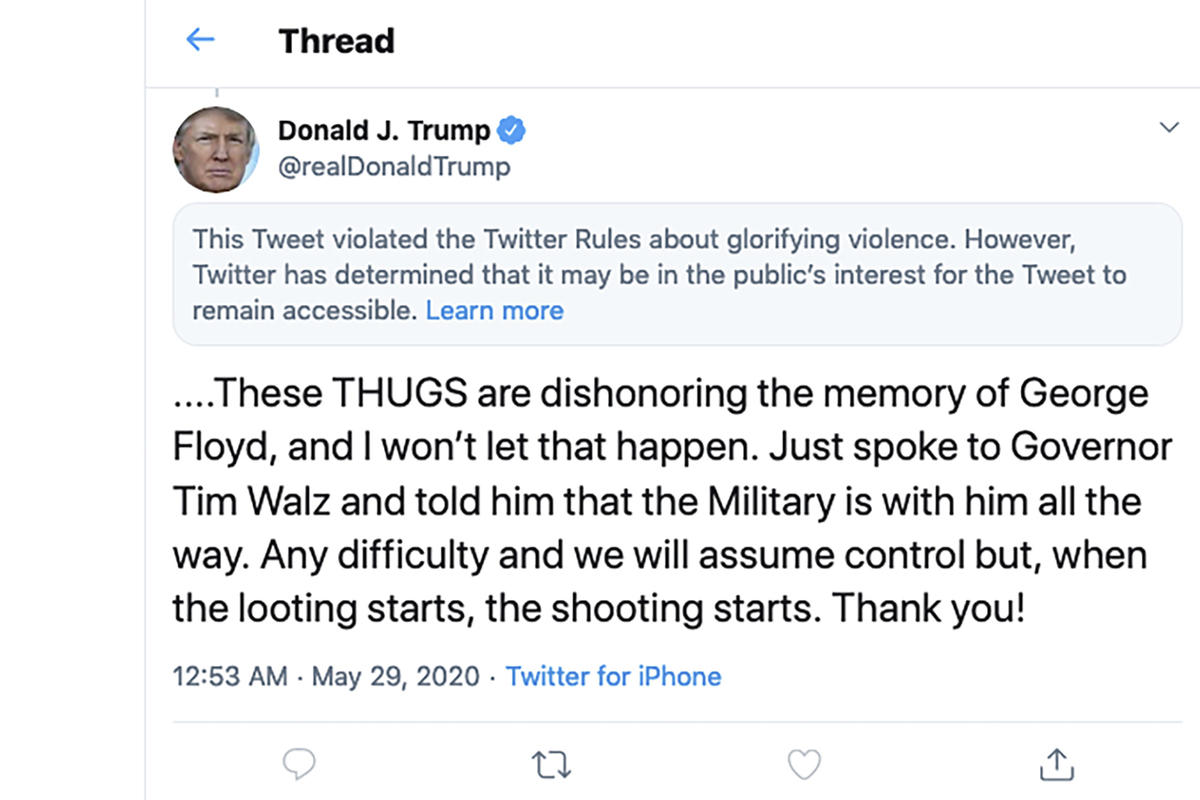 This image from the Twitter account of President Donald Trump shows a tweet he posted on May 29, after protesters in Minneapolis. On Tuesday, the Center for Democracy and Technology sued Trump over the president's executive order aimed at limiting a legal protection long enjoyed by tech companies like Twitter.

In the first of what is anticipated to be a raft of legal challenges against the controversial executive order, the Center for Democracy and Technology argues that Trump's action was an act of revenge that violates the First Amendment rights of both tech companies like Twitter and ordinary Americans who use social media.

"The Executive Order is designed to deter social media services from fighting misinformation, voter suppression, and the stoking of violence on their platforms," said Alexandra Givens, who leads the center.

Trump's confrontation with Twitter started after the company placed a warning on two of the president's tweets that made false claims about voting by mail.

Aggravated over the modest reality check, Trump threatened to shut down social media companies. The president alone does not have the power to close a private company.

Shorter afterward, Trump signed an executive order encouraging federal regulators to reexamine a legal shield that prevents companies like Facebook, Twitter and Google from being held legally responsible for what users post and gives the platforms the ability to police content based on its own internal rules.

The safeguard, Section 230 of the 1996 Communications Decency Act, is widely credited with giving rise to the modern day Internet, where unfettered free speech thrives and views of all stripes are easily found.

Experts have said that if Section 230 were scrapped, online sites would become more aggressive about combating any content that can be perceived as offensive, fearing defamation lawsuits, pushing Facebook and Twitter to censor more often. Additionally, online operations like Wikipedia, the Internet Archives, Yelp and others could be crushed under an unrelenting wave of litigation, experts noted.

Trump and his conservative allies have long accused Twitter of limiting the reach of conservative voices, without offering direct evidence to support that claim.

The president and his supporters have also hammered Twitter for labeling and hiding tweets by the president that violate Twitter's terms of service. Critics of Twitter say such actions are proof that Twitter is acting more like a publisher than a platform and thus should no longer have the legal safeguards of a neutral forum.

Facebook, which has chosen to take a hands-off approach to Trump's posts that have sparked controversy, has seen a revolt among some of its employees for allowing Trump's inflammatory online comments to spread on the platform. Facebook CEO Mark Zuckerberg has said it is not the company's role to become "arbiters of truth."

Legal experts agreed that Trump's executive order would not change a law passed by Congress.

Still, the Center for Democracy and Technology's lawsuit contends that the order "clouds the legal landscape" and puts social media companies on notice that if content moderation decisions are made that displease Trump, executive action could follow.

The suit, which was filed in the U.S. District Court for the District of Columbia, asks a federal judge to rule that the president's order is unconstitutional and to block its implementation.

"Courts have recognized that retaliatory conduct chills a person or entity from exercising their First Amendment rights in the future," the lawsuit states. "President Trump—by publicly attacking Twitter and issuing the Order—sought to chill future online speech by other speakers."

The White House did not immediately respond to the lawsuit.