Accessibility links
Casinos Reopen In Las Vegas Casinos is Las Vegas are reopening Thursday, after being shuttered for more than two months. Workers there are eager to start getting paid again, but they're also worried about their health. 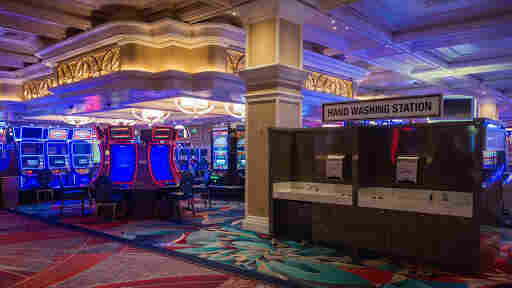 Hand washing stations now share the casino floor with slot machines at the Bellagio. It's part of a move to ramp up hygiene protocols ahead of the establishment's reopening on June 4. David Fuchs/KUER hide caption

For the last two and half months, Gladis Blanco has been out of a job.

Blanco has worked in housekeeping at the Bellagio Resort and Casino in Las Vegas for the last eight years. She has mixed feelings about going back to work.

Her unemployment benefits have not yet kicked in. So she's been living off her savings since being furloughed in mid-March. As the sole provider for her two children, she's eager to start collecting a paycheck again. But she's also concerned that heading back to the Bellagio will place her on the frontlines of the coronavirus pandemic when tourists begin to return to the city's hotels and casinos on June 4.

"People will come from everywhere," she said. "And we don't know whether they're going to be sick or not."

Blanco is one of the many Las Vegas workers now weighing the risks of returning to work in one of the country's entertainment and hospitality capitals. Nevada Gov. Steve Sisolak announced last week that some hotels and casinos would be permitted to reopen their doors on Thursday under Phase 2 of the state's COVID-19 response.

The economic shutdown has left more than 300,000 people in Clark County unemployed, according to the Nevada Department of Employment, Training and Rehabilitation.

"This is much deeper than the Great Recession because we've had no revenue coming in," said Clark County Commissioner Marilyn Kirkpatrick, one of the primary local officials who oversees the Vegas Strip.

2 Tribal Casinos In Connecticut Roll The Dice And Reopen

The iconic 4-mile stretch in Las Vegas falls outside city limits, which places it under the jurisdiction of Clark County. It's home to the top 100 employers in the state and its closure has resulted in a $1.1 billion loss for the county government, Kirkpatrick said.

Despite the economic blow, Kirkpatrick said public health remains her top priority. She supports a gradual reopening of the Strip on the grounds that Nevada has seen a month-long decline in new COVID-19 cases and hospitalizations, and now has the capacity to test 10,000 people per day.

Kirkpatrick also pointed to strict requirements from the state's Gaming Control Board that require hotels and casinos to submit detailed COVID-19 mitigation plans at least seven days before reopening. In her view, employers have gone above and beyond to ensure that employees and guests will be able to return to their establishments safely.

"It's a little bit of an artform," he said during a tour of the Bellagio late last week. "But we think that a lot of the safety mechanisms that we've put in place are absolutely the right direction and the right things to do."

The changes are apparent upon entering the lobby, where freshly printed signage and floor markers remind guests to practice social distancing, and a new QR reader stands at the ready for contactless check-ins.

Maximum capacity is capped at 50%, Flynn said, so half of all the slot machines and tables on the casino floor have been roped off. Those that are open have been outfitted with Bellagio-branded plexiglass panels to separate guests from casino staff and separate guests from each other. At the base of these barriers are small slots where players and dealers can exchange cards and chips while secluded in their own spaces.

Flyn pointed out that poker chips will be disinfected every time they leave the table and cards will be regularly replaced. Attendants will walk the floor, ready to disinfect any surface upon request. And handwashing stations are now interspersed amidst the slot machines and games of baccarat and roulette.

Flynn said that all employees and guests will have their temperatures checked upon arrival — and that any worker with a fever or a symptom of COVID-19 will be sent home and receive what he described as "appropriate compensation."

'The Sheer Volume' Is Hard To Capture: Unemployment In Nevada Soars To Historic High

When asked how enforcement would be carried out, Flynn pointed to inspectors from the state's gaming control board.

"When people look at our industry here, [they don't realize] it is very highly regulated," he said. "We are rule followers. When new rules are set out, we're going to follow them."

But labor leaders like Geoconda Argüello-Kline want to see those rules spelled out more clearly.

Argüello-Kline is the secretary-treasurer of the Culinary Workers Union Local 226, which is one of the most powerful unions in the state. She says their 60,000 members want to see hotels and casinos make their full COVID-19 mitigation plans available to the public, rather than the partial plans that have been released so far.

The union is also calling for hotels and casinos to regularly test 100% of their employees, whom they argue have become frontline workers.

Even with a complete shutdown of the Strip, 15 culinary union workers and their family members have died of COVID-19, Argüello-Kline said, adding that it's not worth opening businesses if one more worker's life is put at risk.