Accessibility links
Trump Wants Show Of Force To Cure National Crisis Even in calmer times, Trump has spoken of having military parades in Washington, such as on his Inauguration Day or the Fourth of July, in the style of those held by the French on the Champs d'Elysee. 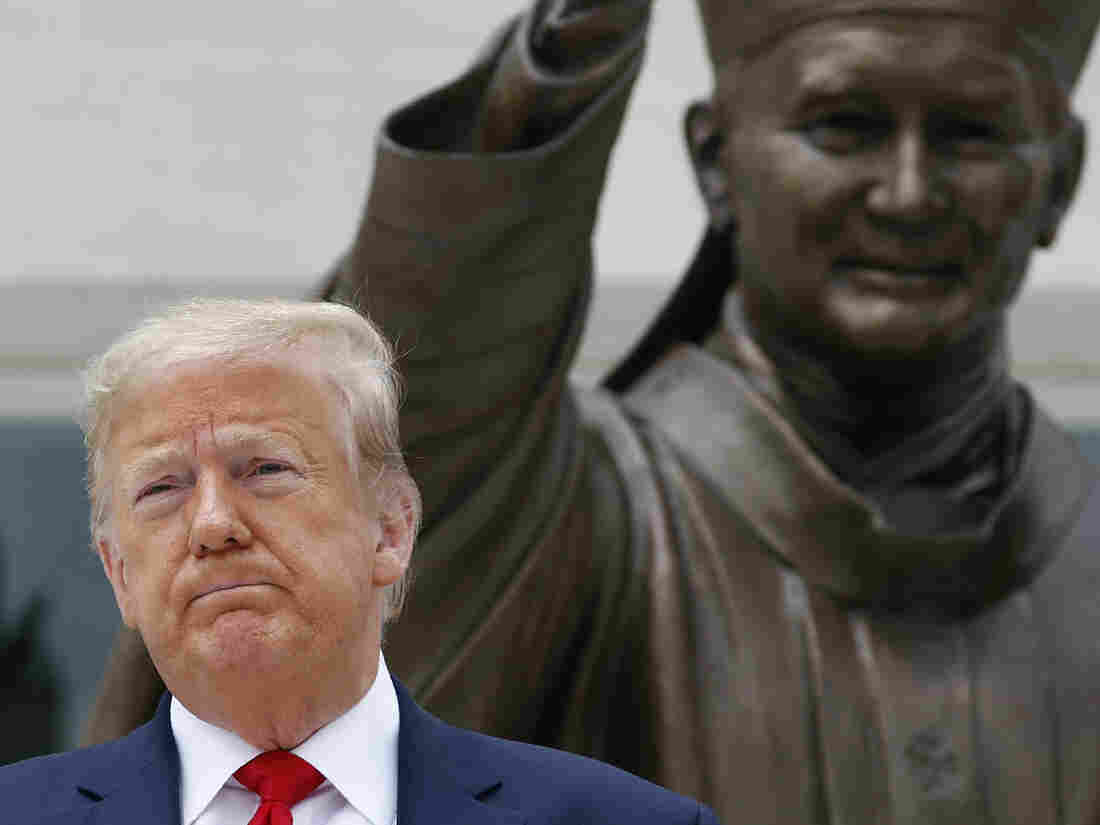 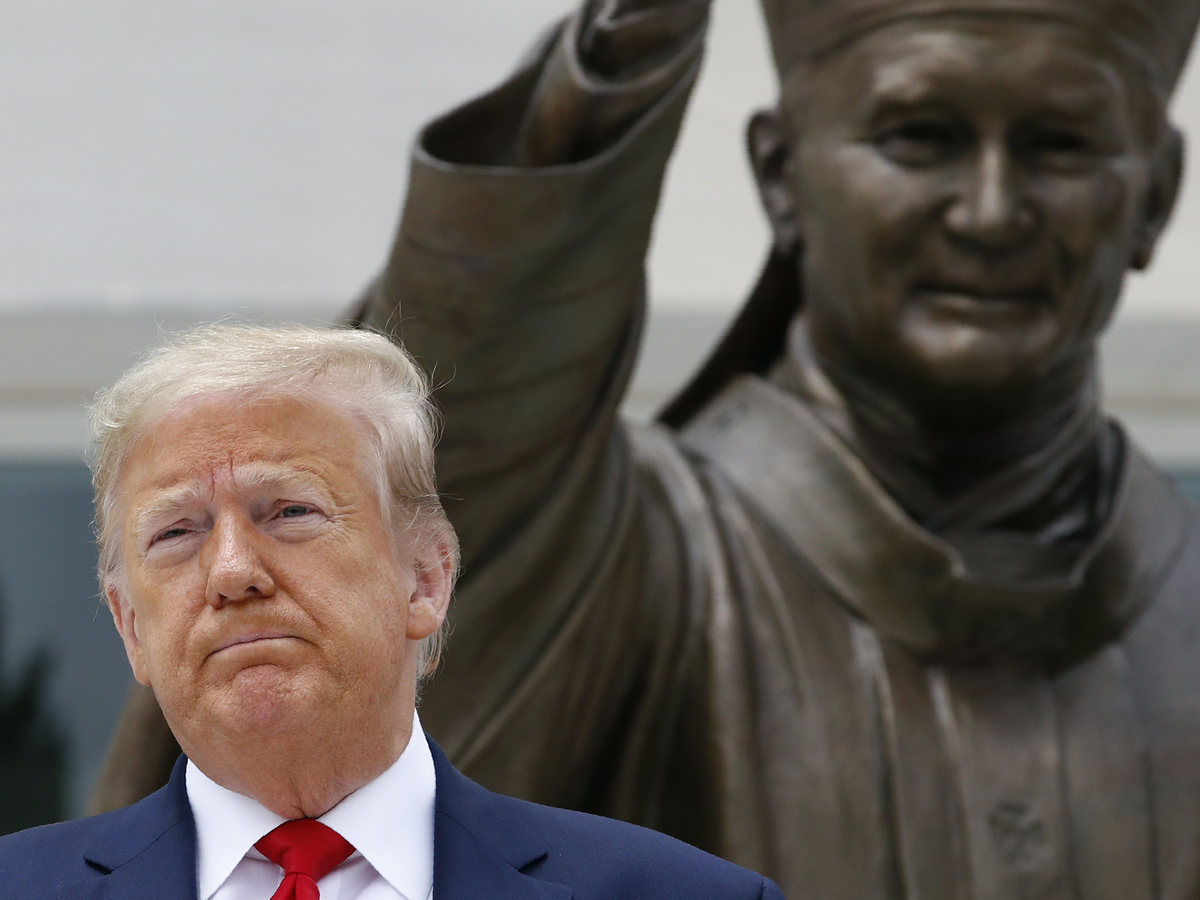 What will official Washington do in the wake of the protests and destructive violence that scarred city after city in recent days, including the capital itself?

Unrest does not stop on command. If there is a pause in the mayhem, it does not mean that the rage has been spent or the wounds have healed.

Any effort to restore confidence in each other will be complicated by the nation's preexisting conditions of pandemic and recession — not to mention the persistent condition of racism in American life and law enforcement. Fires flare up again if not extinguished at the source.

In the days ahead, the nation will need a way forward and a new sense of resolve. It will need people to show the way and provide that resolve.

In short, people will need leadership.

President Trump this week offered one model of leadership, quickly embraced by many of his supporters and allies in government. It may be summed up as a show of force. There should be emphasis here on both the show and the force.

He scolded the governors of states ravaged by street violence, told them to stop being weak and get tough. "You have to dominate," Trump ordered the governors in audio of a Monday call obtained by several news outlets, or "you're gonna look like a bunch of jerks."

Later in the afternoon, Trump delivered a seven-minute vow to protect law and order in the Rose Garden and sent mounted officers to clear the park in front of the White House.

As he spoke the White House was ringed with military police in combat gear wielding riot guns.

If governors failed to deploy enough of their National Guard units to restore order, Trump said he would send in U.S. military units to do so "and quickly solve the problem."

Then he marched with a retinue of security and camera crews across the littered surface of Lafayette Square, past the statue of Andrew Jackson on horseback, for a picture session in front of St. John's Church — built in 1816. 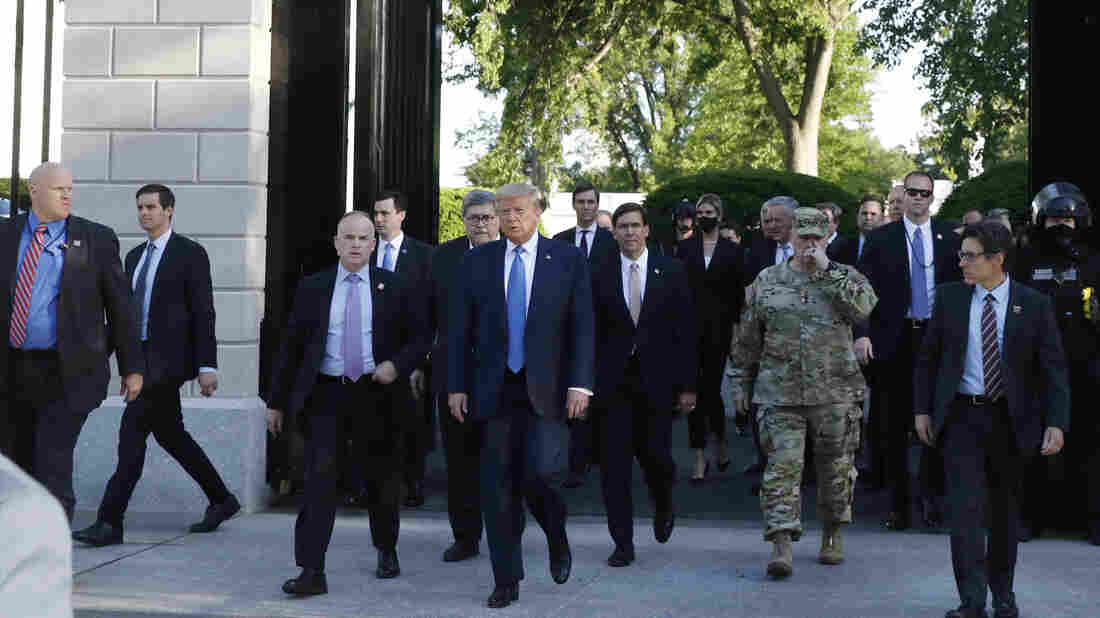 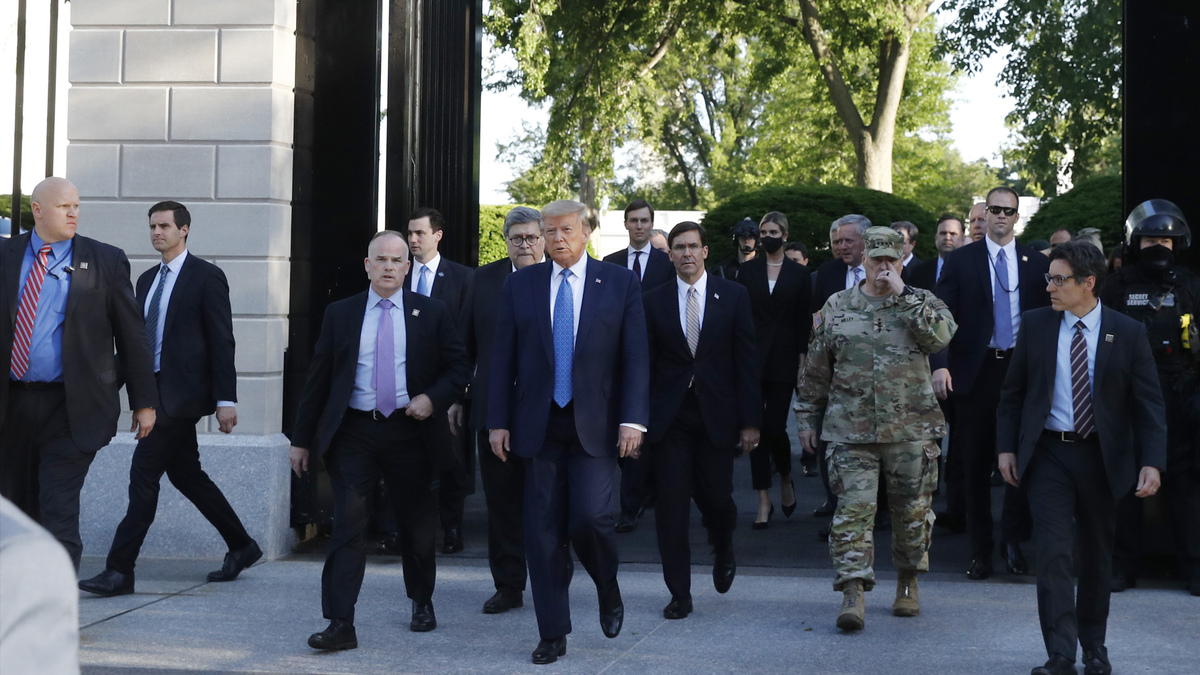 You can see the video with stirring music on the White House Twitter feed — a dramatic walk past walls ablaze with graffiti. Trump stands outside the boarded-up church and holds a Bible.

This was the gesture the president chose to make in the midst of the carnage gripping America's cities. But in his pronouncements to the governors and his barrages on Twitter, he leans toward martial models and metaphors.

Trump puts the emphasis on classic values of strength and certainty. It is all about central authority and top-down orders in a chain of command. Protesters, peaceful and otherwise, wind up at the wrong end of that chain.

Even in calmer times, Trump has often spoken of having military parades in Washington, such as on his Inauguration Day or the Fourth of July, in the style of those held by the French on the Champs-Elysées or the Russians on Red Square.

And when it comes to leadership heroes, we got a reminder of at least two of them over this past weekend, when the president on Twitter took off after the embattled mayor of the city where George Floyd was killed.

Mayor Jacob Frey of Minneapolis will never be mistaken for the late, great General Douglas McArthur or great fighter General George Patton. How come all of these places that defend so poorly are run by Liberal Democrats? Get tough and fight (and arrest the bad ones). STRENGTH!

It might seem a curious comparison, but Trump has long used the two World War II generals as his rhetorical standard for toughness. He invoked their names at his rallies as far back as the 2016 campaign.

MacArthur, sometimes called "American Caesar," was the Army commander against Japan in World War II. Patton was a cantankerous, controversial combat commander in the war against Nazi Germany. Both were known for being flamboyant, imperious and ambitious.

It may or may not have occurred to Trump, as he confronted protests in Washington, that MacArthur led, and Patton took part in, the 1932 cavalry assault that cleared the bonus marchers from the National Mall in Washington, D.C. The so-called "Bonus Army" consisted of World War I veterans who had come from all over the country, seeking their promised benefits in the depths of the Great Depression.

It was a long time ago, long before either cellphones or videotape. But it was very much a show of force, an assertion of law and order, not unlike what the president seemed to be advocating in the current civil unrest.

Trump might also have had a thought, as he strode across Lafayette Square of the famous photographs of MacArthur returning to the Philippines in 1944, making good on his vow to do so when forced to evacuate at the start of the war.

That iconic image shows MacArthur and entourage splashing through the surf from a landing craft to the beach, his corncob pipe clenched in his teeth. The photo this produced was so good it was rumored to have been staged, and in fact MacArthur did reenact it when landing later on another island. It has also been noticed that it resembles a picture Patton publicized of himself coming ashore in the invasion of Sicily in 1943. 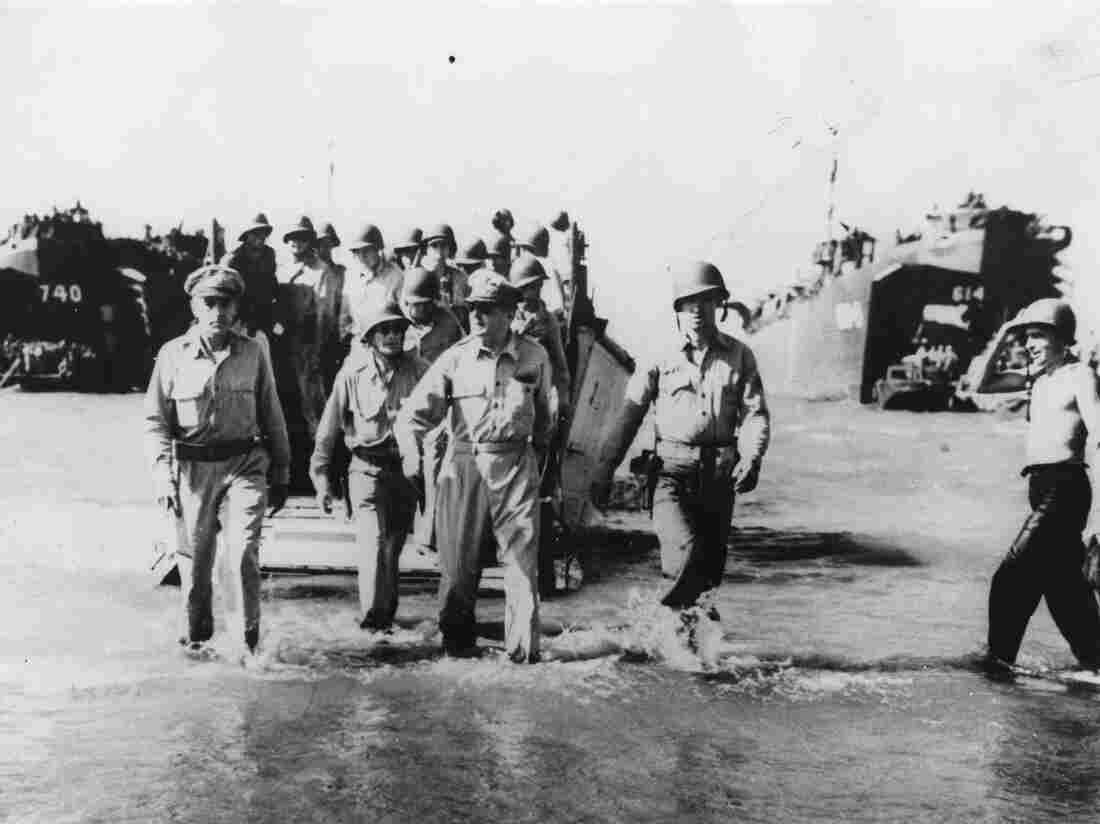 General Douglas MacArthur goes ashore from a landing craft with a party of the invading force at Luzon. This photo, taken in 1945, shows MacArthur reenacting a a similar scene from 1944. Keystone/Getty Images hide caption 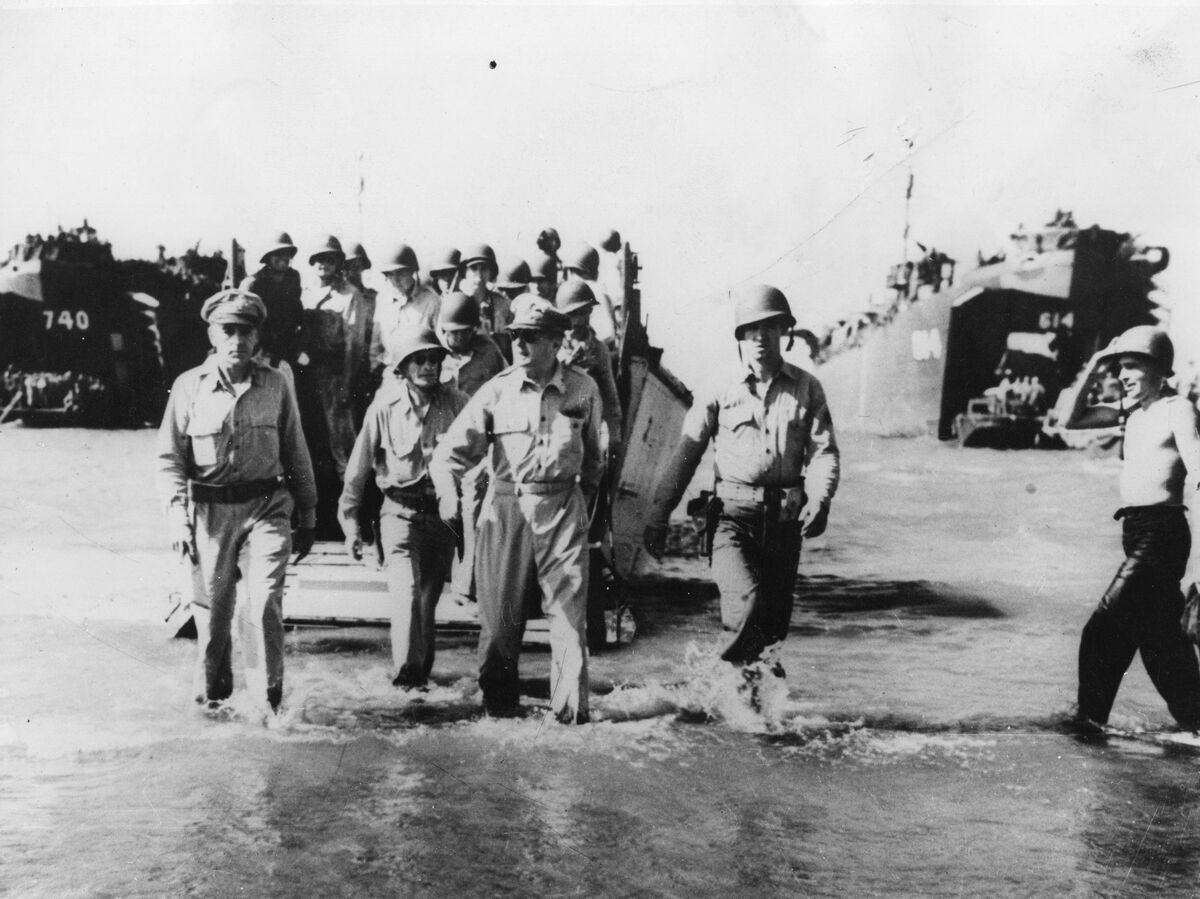 General Douglas MacArthur goes ashore from a landing craft with a party of the invading force at Luzon. This photo, taken in 1945, shows MacArthur reenacting a a similar scene from 1944.

In any event, MacArthur's return is one of the most famous and reproduced photos of that war, and well known to every schoolboy who grew up in the postwar years. Many carried this epitome of valor and virility well into adulthood. And such images influence ideas about power and politics that have long prevailed.

"Too often, those who seek ascendancy over their colleagues in government and try to dominate them are regarded as strong, and by that very token, successful," writes the Oxford emeritus professor of politics Archie Brown, "and those who work within a more collective leadership are deemed to be weak and less successful."

In his book, The Myth of the Strong Leader, Brown quotes an American scholar of government, the late Hugh Heclo, and his suggestion that presidents can bring other people together to solve problems, producing "a more subtle and productive form of leadership [than the] hyped-up kind of 'follow me' drama" seen on movies and TV.

Something like that alternative has been modeled in recent days by officials and other civic leaders at all levels in cities around the country — often at considerable risk.

They have tried to understand and mediate, whether in the street or in the meeting rooms of power. In either setting, it is easy to get caught in the middle, to be accused at once of doing too much and too little.

Atlanta Police Chief Erika Shields won plaudits for wading in among the protesters on Friday, expressing empathy and listening. But after the weekend protests included violence and looting, Shields was being faulted for being "soft" — while also being criticized when some of her officers made rough arrests to enforce curfew.

Like the mayors and other police chiefs, Shields was trying to be aware of the protesters' grievances without ceding to those who had more destructive agendas.

There have been stories and video of officers talking and even kneeling with peaceful protesters. And there are voices raised in many places to contradict those who would judge all protesters by those who exploit the moment to commit crimes.

There have also been those who have risked much by joining the protest, each in their own way. One notable case was that of the top-ranking enlisted man in the Air Force, Chief Master Kaleth Wright, who took to Twitter to express his outrage.

"Who am I? I am a Black man who happens to be the Chief Master Sergeant of the Air Force. I am George Floyd," Wright said.

I am a Black man who happens to be the Chief Master Sergeant of the Air Force.

I am George Floyd…I am Philando Castile, I am Michael Brown, I am Alton Sterling, I am Tamir Rice.

Another prominent voice was immediately heard excoriating the president's video moment on the square and in front of St. John's. It was that of Bishop Mariann Edgar Budde of the Episcopal Diocese of Washington.

"He did not come to pray," Budde told NPR's Morning Edition host Steve Inskeep. "He did not seek to unify our country but rather he used our symbols and our sacred space as a way to reinforce a message antithetical to everything that the person of Jesus ... and the gospel texts ... represent."

On Tuesday, the president moved on to the shrine honoring Saint John Paul II, laying a wreath in his memory. That got him a sharp rebuke from the archbishop of the Catholic Archdiocese who didn't want the shrine "so egregiously misused and manipulated."

This is more than mild pushback, and these reactions must strike the commander-in-chief as surprising. They surely do not fit the command-and-control paradigm, or at least as this president imagines it.

But there is reason to think that even the contemporary military has moved on from the paradigm the president imagines. Perhaps in the next phase of our national life, whenever that comes, something more collaborative and encompassing will not seem strange or suspicious as a style of leadership.

If so, there could still be some good to take from the trauma and travails of 2020.