Accessibility links
Pentagon Chief Rejects Trump's Threat To Use Military To Quell Unrest In a public break with President Trump, Defense Secretary Mark Esper says he does not support invoking the 1807 Insurrection Act and deploying troops to American streets. 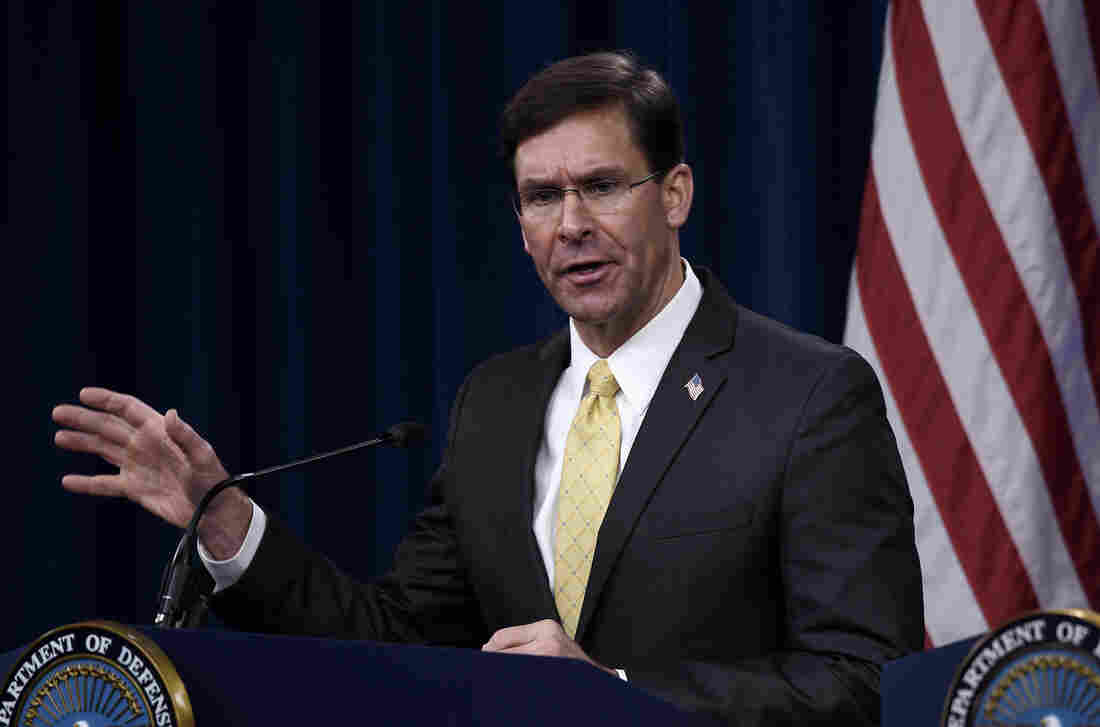 Defense Secretary Mark Esper, here at a Pentagon press conference in March, says he does not support invoking the 1807 Insurrection Act to deal with the current unrest in the nation. Olivier Douliery/AFP via Getty Images hide caption 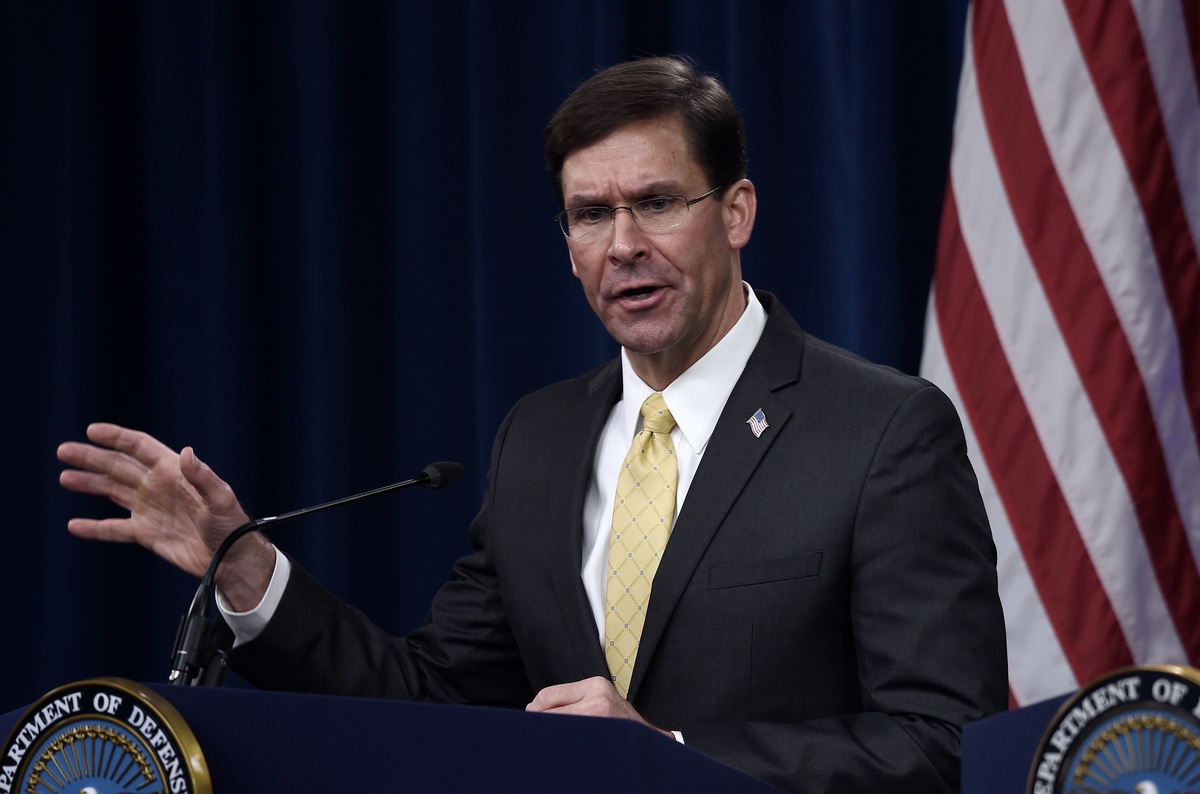 Defense Secretary Mark Esper, here at a Pentagon press conference in March, says he does not support invoking the 1807 Insurrection Act to deal with the current unrest in the nation.

In a move that possibly placed his job in peril, Defense Secretary Mark Esper publicly disagreed Wednesday with President Trump's threatened use of the 1807 Insurrection Act to quell widespread unrest over the death of George Floyd, a black man who died after a white Minneapolis police officer kneeled on his neck.

"The option to use active-duty forces in a law enforcement role should only be used as a matter of last resort, and only in the most urgent and dire of situations. We are not in one of those situations now," Esper told reporters at a Pentagon briefing. "I do not support invoking the Insurrection Act."

Esper added, "I've always believed and continue to believe that the National Guard is best suited for performing domestic support to civil authorities in these situations, in support of local law enforcement."

The 1807 Insurrection Act authorizes a U.S. president to deploy the military in times of domestic emergencies. The law was updated in 2006 to include natural disasters and terrorist attacks as grounds for sending federal troops to restore order.

In a brief statement Monday evening in the White House Rose Garden, Trump put mayors and governors on notice that if they failed to "establish an overwhelming law enforcement presence until the violence has been quelled," he would take action.

"If a city or a state refuses to take the actions that are necessary to defend the life and property of their residents," Trump declared, "then I will deploy the United States military and quickly solve the problem for them."

The White House responded to Esper's rebuffing of the president, according to Reuters, by asserting that "Trump will use the Insurrection Act if needed." Esper continues to be defense secretary "as of right now," the news service quoted a White House source as saying, "and if the President loses faith in him, we'll let you know."

Esper also defended having accompanied Trump that same evening as the president strode through Lafayette Square, a public park in front of the White House that had just been violently cleared of peaceful demonstrators by security forces clad in riot gear.

"I was not aware of law enforcement's plans for the park. I was not briefed on them, nor should I expect to be," Esper said Wednesday when asked about the forceful expulsion of protesters in what he described as a law enforcement action. "But they had taken what action I assume they felt was necessary, given what they faced."

Esper also suggested he did not know in advance that he would be following Trump to a photo-op in which the president brandished a Bible in front of a church boarded up following a fire in its basement during demonstrations the previous evening.

"I did know that following the president's remarks on Monday evening that many of us were going to join President Trump and review the damage in Lafayette Park and at St. John's Episcopal Church," Esper said. "What I was not aware of was exactly where we were going when we arrived at the church and what the plans were once we got there."

Esper for the first time publicly condemned the May 25 death that sparked a nationwide wave of protests.

"The killing of George Floyd by a Minneapolis policeman is a horrible crime," the defense secretary said. "The officers on the scene that day should be held accountable for his murder."

Esper had been sharply criticized for appearing to give tacit approval to the forcible removal of peaceful demonstrators to accommodate Trump's stroll with him and others through Lafayette Square to the church.

In a letter to Esper published Tuesday in The Washington Post, James Miller, former undersecretary of defense for policy, wrote that he was resigning his position on the Defense Science Board immediately because of what Miller described as Esper's failure to honor his oath to uphold the U.S. Constitution and its First Amendment that stipulates "the right of the people peaceably to assemble."

"You may not have been able to stop President Trump from directing this appalling use of force," Miller wrote in his resignation letter to Esper, "but you could have chosen to oppose it. Instead, you visibly supported it."

Miller also chided Esper for having told the nation's governors in a Monday conference call with Trump that they needed to "dominate the battlespace" when dealing with protesters.

Esper, a U.S. Military Academy graduate and Army veteran, told reporters that particular phrase was simply "a military lexicon I grew up with" that is used to describe "a bounded area of operations."

"In retrospect," he added, "I would use different wording so as not to distract from the more important matters at hand or allow some to suggest that we are militarizing the issue."

The defense secretary said he has requested an internal investigation of reports that at least one helicopter flown by the District of Columbia National Guard had hovered low above demonstrators Monday evening, breaking tree branches and sending objects flying with the strong downwash of its rotating blades.

Pentagon spokesman Jonathan Rath Hoffman confirmed Tuesday evening that about 1,600 active-duty troops had been flown by military aircraft to bases outside Washington, D.C., as part of what he called "a prudent planning measure in response to ongoing support to civil authorities operations."

Hoffman said that Esper had authorized moving an Army infantry battalion from the 82nd Airborne Division at Fort Bragg, N.C., to what the Pentagon calls the National Capital Region. Similarly, Army military police from Fort Bragg as well as from Fort Drum, N.Y., were also dispatched as potential reinforcements and placed on heightened alert, according to Hoffman.

The Associated Press reported Wednesday that 200 troops from the 82nd were ordered back to Fort Bragg, but that later Esper had reversed that decision.

Former Defense Secretary James Mattis told The Atlantic in a story released Wednesday that the unrest following Floyd's death and Trump's responses to it show "the consequences of three years without mature leadership."

Mattis told the publication Trump is the first president in Mattis' lifetime who doesn't try to unite Americans, or even pretend to unite them, but actually tries to divide them. The former defense chief said America shouldn't be seen as a battlespace "that our uniformed military is called upon to dominate."

Mattis resigned as Trump's defense secretary in December 2018 over a disagreement on Syria policy.

A previous version of this story mistakenly identified the last name of a Pentagon spokesman. The spokesman is Jonathan Rath Hoffman, not Jonathan Rath.