Accessibility links
Teaching About George Floyd And Black Lives Matter Jesse Hagopian, the co-editor of the book Teaching For Black Lives, talks about the curriculum for this moment.

Q&A: How To Talk To Kids About Black Lives And Police Violence

Q&A: How To Talk To Kids About Black Lives And Police Violence 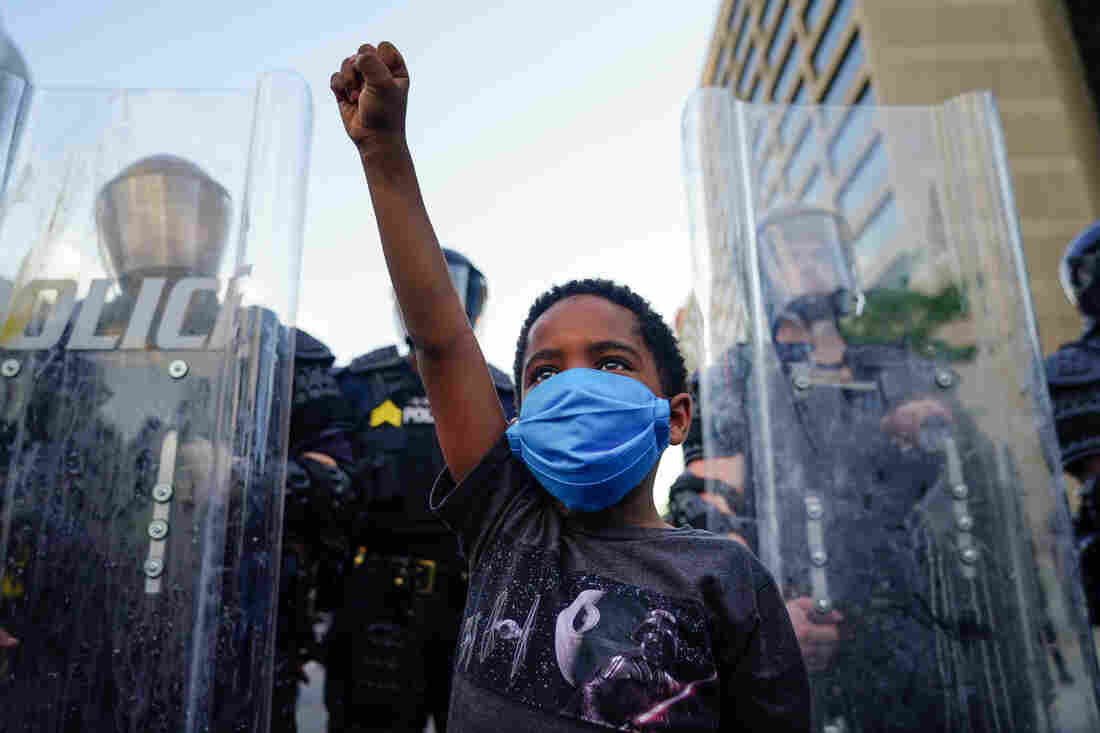 A young boy raises his fist for a photo by a family friend during a demonstration in Atlanta. Elijah Nouvelage/Getty Images hide caption 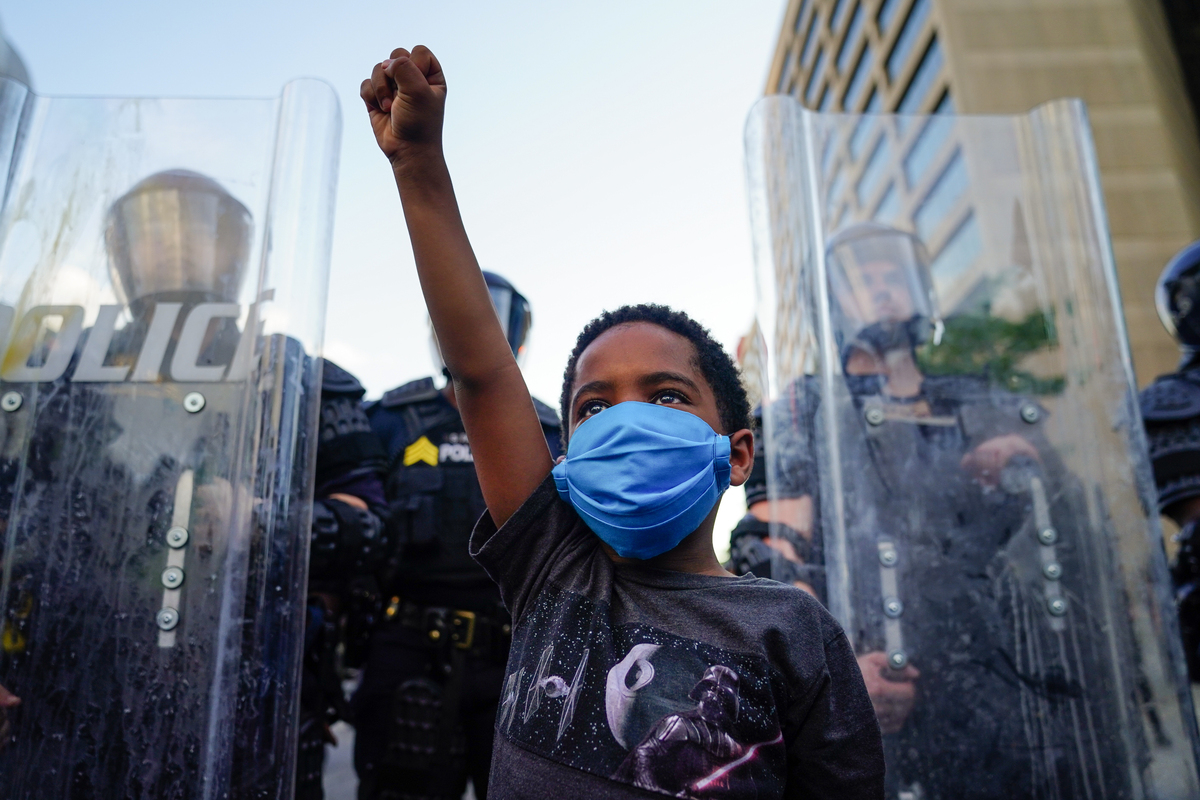 A young boy raises his fist for a photo by a family friend during a demonstration in Atlanta.

Like most public school educators, Jesse Hagopian has spent the spring struggling to teach his students online. Some are homeless, while others are working frontline jobs to support their families.

And now many of his students, like others around the country, are on the front lines in another sense: protesting the deaths of George Floyd and other black people at the hands of police.

"I don't think their schooling is stopped at all. I think, if anything, it's on hyperdrive," Hagopian says. He is an author, an activist, a father of two sons and a black teacher at Garfield High School in Seattle, a city where more than 80% of the teachers are white. And he is the co-editor, with Dyan Watson and Wayne Au, of the 2018 book Teaching For Black Lives.

I talked with Hagopian about what it means to teach for black lives and why it's important. Our conversation has been edited for length and clarity.

I want to start with a word for parents, since so many parents are home teaching their kids now and may not know how to talk about what's happening. What's your advice for them?

Teaching Tolerance, a project of the Southern Poverty Law Center

A resource guide for talking about race and violence with kids, from the Center for Racial Justice in Education

Absolutely. I think that teaching for black lives now doesn't just mean teachers, right? It means all the parents who have been conscripted into home schooling. And they should take this opportunity to have these hard conversations with their kids about what's happening in our world today.

How old are your sons?

How do you talk to your 7-year-old about police violence?

It's been a challenge his whole life. On his 2nd birthday, it was Martin Luther King Day, and I gave the final speech at the rally in Seattle. And a few minutes after that, a police officer pepper-sprayed me in the face. It was horrific pain. I got to his party late. I spent the party pouring milk in my eyes and my face. And it was traumatizing to him. So he's been knowing what police violence is about for most of his life.

And then [last week], we all went down to the rally. My wife and my kids and I. And we were there for about 20 minutes listening to speeches and chants before the police shot a flash-bang grenade into the crowd, just seemingly unprovoked and out of nowhere.

The smoke was rising. People were screaming. Everyone was running as fast as they can away. And my kids were really rattled and upset. And so, you know, I've had to have some very difficult talks that I wish I didn't have to have yet with my kids about this moment and about police violence.

He's learning from our experiences, and what I try to do is give him some context to it, help him process his emotions. And tell them he is not wrong for being scared, that it's nothing to be ashamed of. That it was OK to cry when we were at the rally and that we left right away. And I told him I would always keep him safe. So I'm just trying to hold them close right now.

Why did you publish the book Teaching for Black Lives?

We knew that there was a need to bring conversations about police violence, and about the loss of black life, and about the great contributions and struggles that black people have gone through throughout history, into the classroom.

You know, our students were having discussions about these horrific videos that they were seeing. And yet too many classrooms were not safe spaces to hold those discussions, so that kids are talking about it in the hallway, on the playground or on the school bus. But then actually analyzing it and what it means and how it relates to their lives was absent from too many classrooms.

And so we wanted to help provide inroads for teachers to be able to have difficult conversations about the real-life situations that their kids are going through.

And what is included in those conversations? Or to put it another way, what's missing from most school curricula?

Too often black people are reduced to slavery, and the only way that kids learn about black history is learning about enslavement. And, you know, we wanted to say, actually there is this incredible legacy of struggle and contributions to our country that are far bigger than our oppression.

And how is this coming into your teaching right now?

I've been trying to give historical context so that they can learn from the struggles of the past and then apply those lessons today.

We had Barbara Ransby [a professor of gender and women's studies and African-American studies at the University of Illinois Chicago] come to focus in on black women educators. So we looked at Septima Clark and Mamie Till ... and Ella Baker, and the way she always uplifted black youth.

But I think one of my biggest roles is just to be there for emotional support. Just to tell [my students] I care about them and that if they're having a hard time, you know, I'm someone they can talk to as they go through grief and trauma.

We check in with their feelings every day. The first thing we do in my class is we do a mood meter. There's four quadrants with different colors. And they describe how they're feeling based on what color they're feeling. Beginning class with that. And using that as a way to then enter into a discussion about what's causing those feelings has been really important. 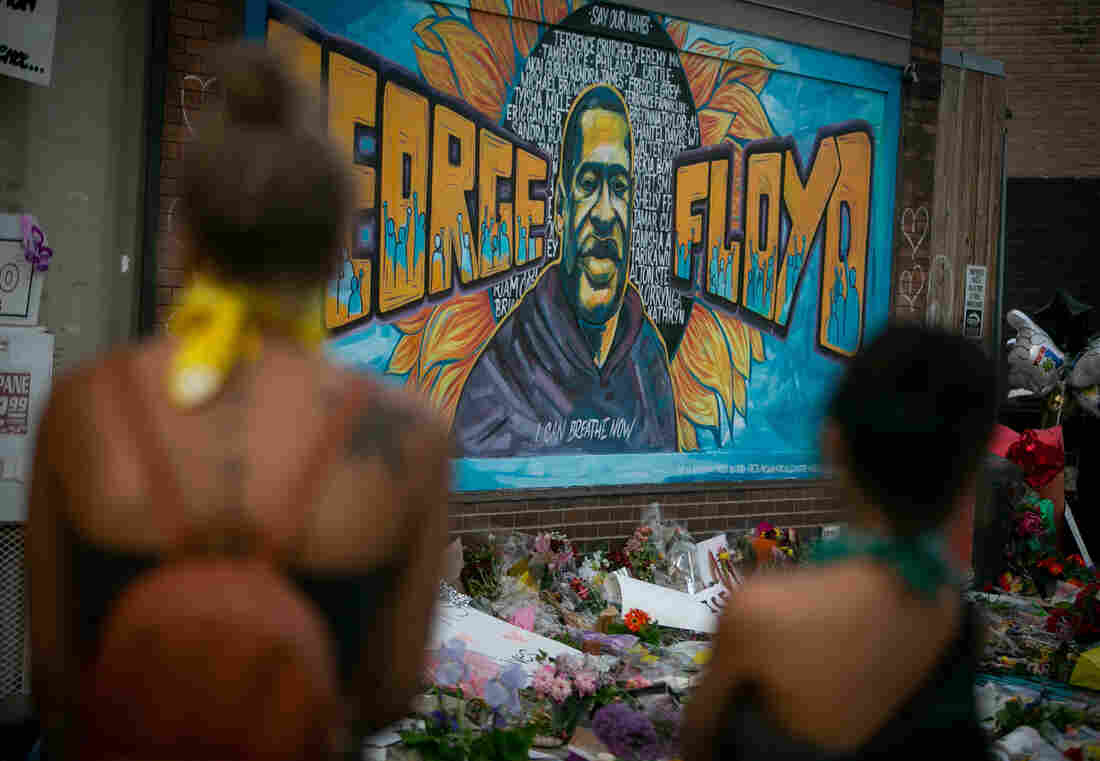 People defy the curfew to pay their respects at the makeshift memorial and mural outside Cup Foods where George Floyd was killed on May 31 in Minneapolis. Jason Armond/Los Angeles Times via Getty Imag hide caption

Schools are very segregated. But at the same time, they're among the more diverse spaces sometimes in our lives. What does teaching for black lives look like when your classroom is mixed?

I think that I've had some of my most powerful moments of teaching in mixed-race settings. I have some really powerful stories of white students who had incredible breakthroughs with understanding their own identity and committing themselves to being allies for their black peers.

The vast majority of teachers in Seattle and across the country are white. And so if we're going to teach for black lives, it's going to require white teachers to do so. And that can be difficult. It can make you uncomfortable. But I hope that the video of George Floyd and the ensuing uprising that's happening around the country is enough of a catalyst to convince teachers that they need to educate themselves about the history of institutional racism. They need to explore their own identity as white educators and what that means. And then they need to take action by teaching about what they've learned.

And sometimes that looks like opening up space to allow the black students to teach and to share their experience. And sometimes that means contextualizing current events with history. Right. So, especially this week, teaching about the Tulsa massacres.

So I think that we need to struggle to get more black teachers in the workforce. But we also need to expect that the white teachers teach for black lives.

Can you talk about the specific demands of the Black Lives Matter At School movement? I saw that Minneapolis public schools has just voted unanimously to terminate its contract with the police department.

Absolutely. I think it will be a beacon to many educators across the country who are going to start putting similar resolutions forward at their school board meetings in this moment.

"Counselors, not cops," is one of the four demands we have, and I think it's one of the concrete reforms that could make a huge difference right now. The other three demands are to end "zero-tolerance" discipline policies, mandate black history and ethnic studies, and hire more black teachers.