Accessibility links
Former Joint Chiefs Chairman Condemns Trump's Threat To Use Military At Protests In rare remarks, retired Gen. Martin Dempsey rebuked the president's threat to use military troops against protesters as "dangerous," saying it would hurt relations between the military and civilians. 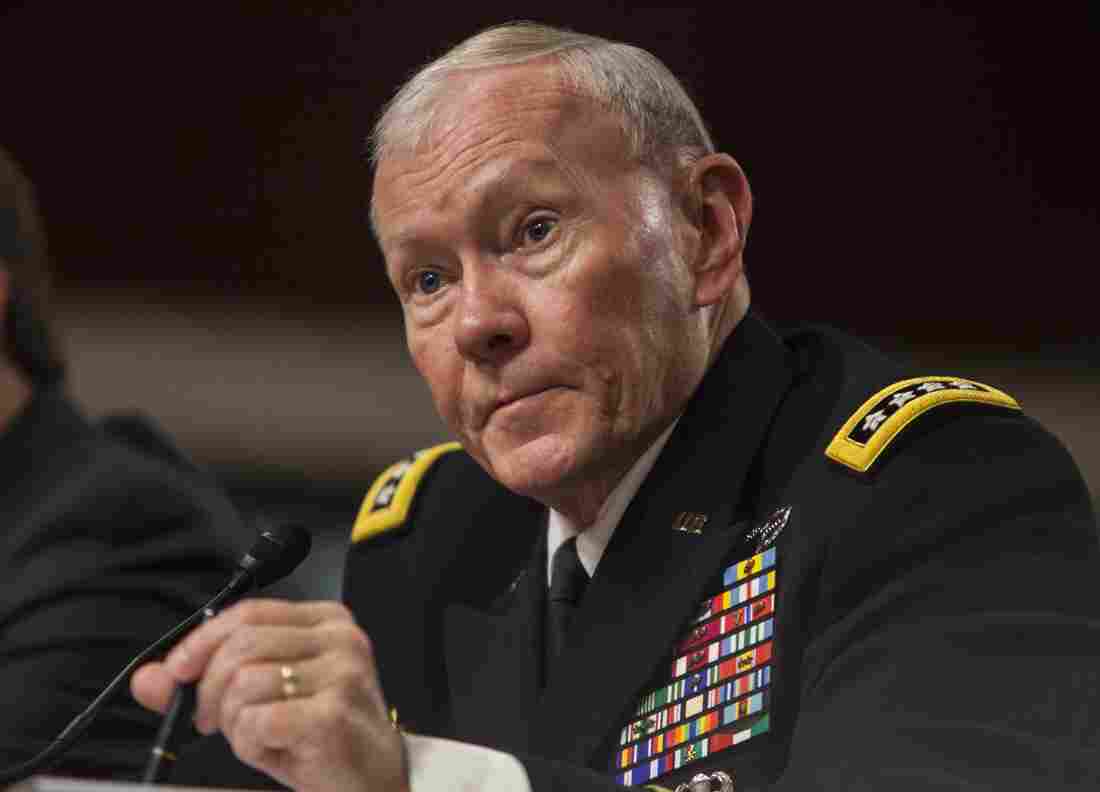 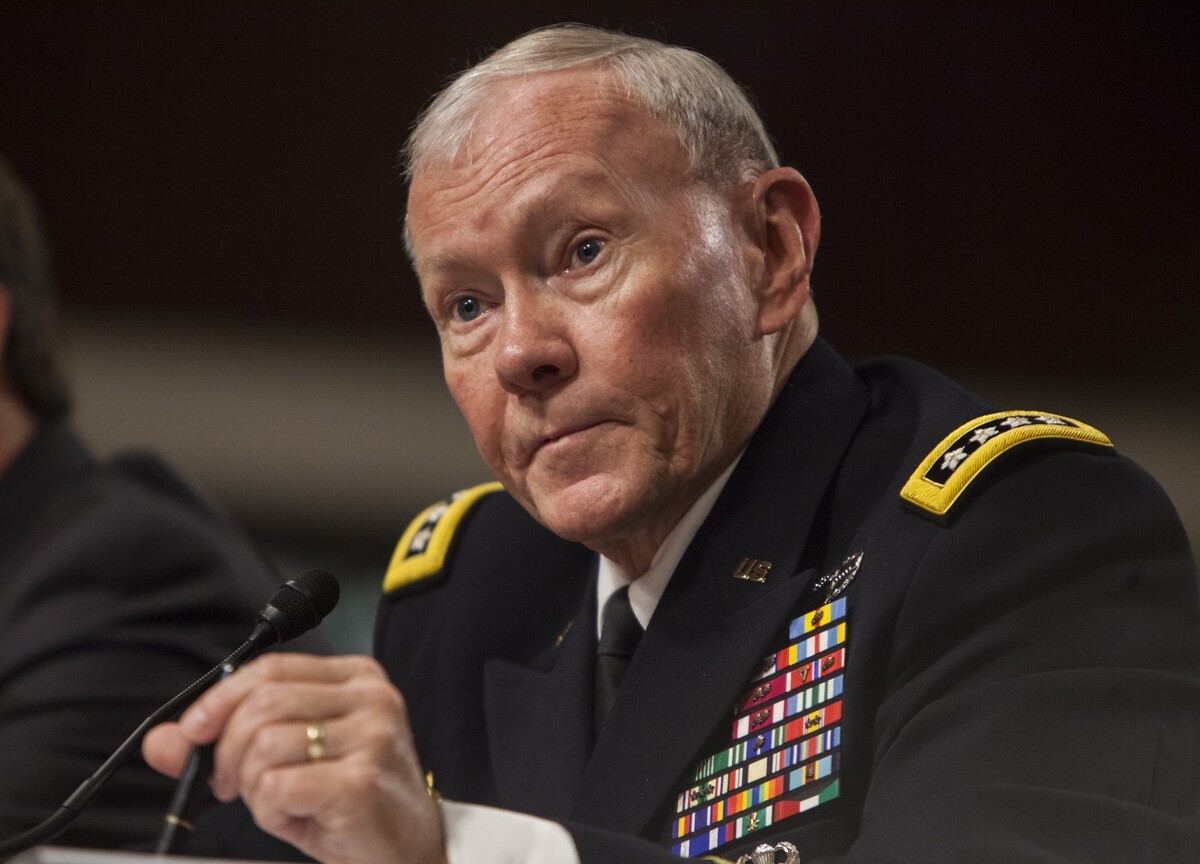 Retired Gen. Martin Dempsey, former chairman of the Joint Chiefs of Staff, is speaking out against President Trump's call to use military force to suppress nationwide protests over police brutality.

In rare public comments, the former Joint Chiefs of Staff Chairman Ret. Gen. Martin Dempsey condemned Trump's threat to use military force to suppress nationwide protests as "dangerous" and "very troubling," in an interview with NPR on Thursday.

"The idea that the president would take charge of the situation using the military was troubling to me," Gen. Dempsey said. 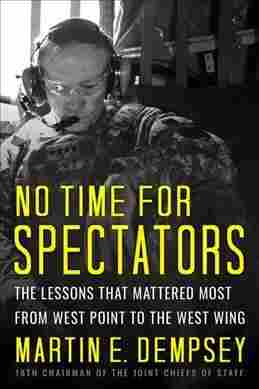 No Time for Spectators

Title
No Time for Spectators
Subtitle
The Lessons That Mattered Most from West Point to the West Wing
Author
Martin E. Dempsey

On Monday, President Trump levied the possibility of engaging federal troops in response to the demonstrators' unrest triggered by the death of George Floyd, who was killed last week while he was in police custody.

"If a city or a state refuses to take the actions that are necessary to defend the life and property of their residents," Trump warned governors and mayors in the White House Rose Garden, "then I will deploy the United States military and quickly solve the problem for them."

The retired general said military involvement should be reserved for "conflict in external wars."

The retired general isn't the first among top military brass to break with the president on this issue. Retired Marine Gen. Jim Mattis, Trump's former defense secretary, and Defense Secretary Mark Esper also had stinging words for Trump over his call for active-duty troops.

Dempsey draws on his insight from his four-decade military career in a new book, No Time For Spectators: The Lessons That Mattered Most From West Point To The West Wing.

As the United States confronts multiple crises, Dempsey offers some advice about how to lead at this time.

"We've got to continue to work to develop a sense of belonging among leaders and those who follow them," he said.

On why he's speaking out now

There were a couple of things that came on rather quickly. One of them was the description of the challenge with these protests of dominating the battle space. That's a characteristic that we use for conflict in external wars. And I thought, that's not something the American people should think about in terms of when they see members of the military on their streets.

By the way, I should mention, there's no question that the law would allow the use of military in extremis, in an extreme situation, when state governments were either unable to even convene or that when state and local law enforcement were overwhelmed. But none of that seemed to be the case, and so the idea that the president would take charge of the situation using the military was troubling to me.

This idea that we have to maintain a relationship of trust between the American people and its military is important because that is who we are. But also, pragmatically, we have an all-volunteer force and we ask parents across the country to share their sons and daughters with us for a period of military service, and were we to lose the trust and confidence of the American people, it would make sustaining that all volunteer force more than difficult.

On dangers to both democracy and the military

It's the latter that caused me to believe that I needed to make a comment about it — that the relationship between the American people and the military, who they represent and serve, would be adversely affected if this wasn't handled very carefully.

If you take it to the next level and introduce the National Guard — the National Guard are also men and women from that state. They interact with the population frequently, whether it's in military ceremonies around holidays, or whether it's assisting with big events in the state or if a state has a natural disaster, they show up and they do good work. So, the people of the state know their National Guard. And that has a calming influence.

The active military, the federal military, it is not from among the people of a particular city, generally ... and so I don't think they have a calming influence. It's not their fault, I mean, it's just the introduction of a force purpose-built and designed for service overseas against our enemies. And so, you have to be very careful about the introduction of that force. They're very highly disciplined, and they're well-trained, but they're not a calming influence. They should only be used, in my judgment, in truly an extremis situation.

On whether this week's events made him angry, as retired Gen. Jim Mattis, said they did him

All of us try to stay as far away from politics as we can. And equally, we try not to make our successor's jobs any more difficult than they already are. Personally, I would never use such a characteristic to describe the activities that occur in Washington, D.C. ...

You'll often hear tossed around, this idea that we live in unprecedented times. Well, I think we oughta believe it. We do — we live in unprecedented times. There are some of my peers that have decided they couldn't sit on the sidelines any longer. Just as I'm concerned about the use of the military in these kind of scenarios and the effect it would have on the relationship [with civilians], I also worry deeply about the relationship of our elected officials with senior military leaders because of this. We just have to be very careful about how we talk about each other.

NPR's Emma Bowman adapted this interview for the Web.