Accessibility links
Being Black In America: 'We Have A Place In This World Too' As protests continue around the country in response to several high-profile deaths of African Americans in recent weeks, black people say they are frustrated, fearful and fatigued. 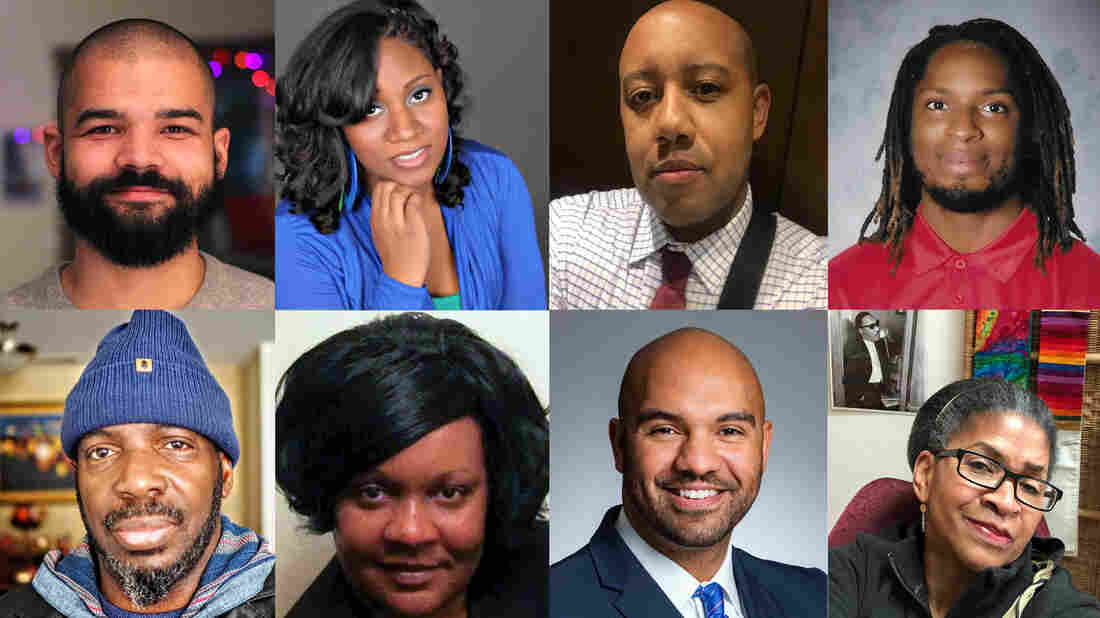 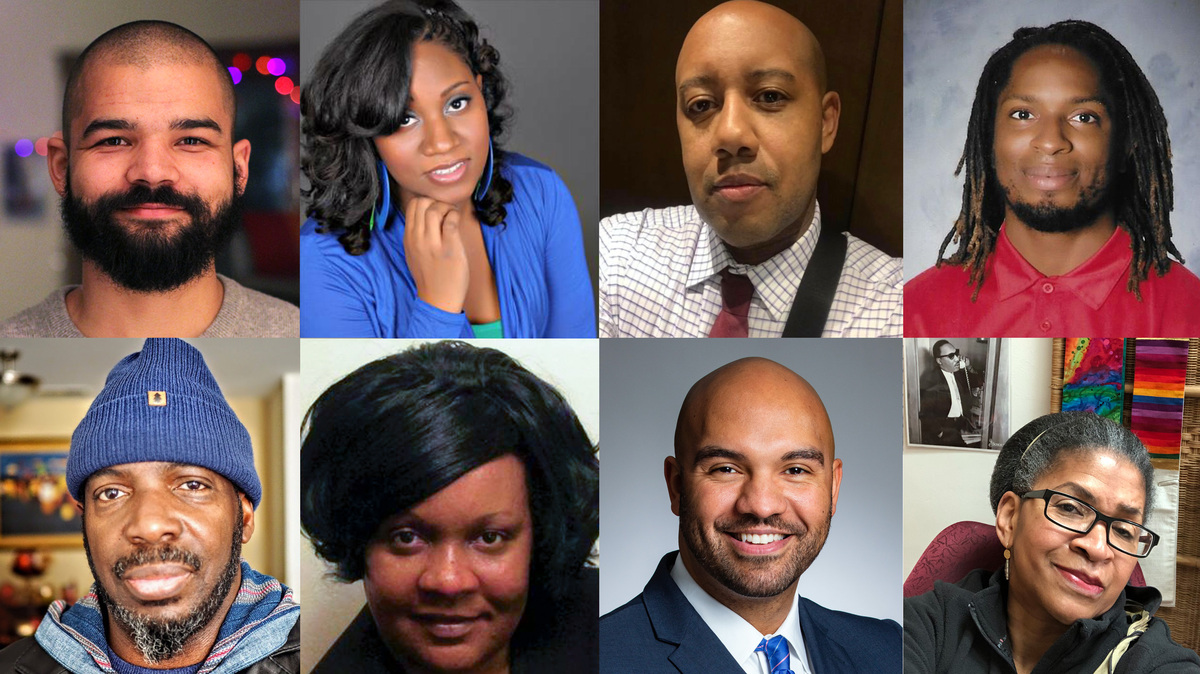 Editor's note: NPR will be continuing this conversation about Being Black in America online and on air.

As protests continue around the country against systemic racism and police brutality, black Americans describe fear, anger and a weariness about tragic killings that are becoming all too familiar.

"I feel helpless. Utterly helpless," said Jason Ellington of Union, N.J. "Black people for generations have been reminding the world that we as a people matter — through protests, sit-ins, boycotts and the like. We tried to be peaceful in our attempts. But as white supremacy reminds us, their importance — their relevance — comes with a healthy dose of violence and utter disrespect for people of color like me."

For more than a week, tens of thousands of people have thronged cities nationwide, staging protests. The demonstrations were triggered by the death of 46-year-old George Floyd while in police custody in Minneapolis on Memorial Day. Floyd, a black man, died while a white police officer knelt on his neck for almost nine minutes.

The protests also reflect outrage over the shooting death of 25-year-old Ahmaud Arbery while he was jogging through a Glynn County, Ga., neighborhood in February. Three white men were arrested in connection with his death, which was caught on video. Tensions also have flared in response to the death of Breonna Taylor, a 26-year-old black woman who was shot and killed in her apartment by police in Louisville, Ky., in March. 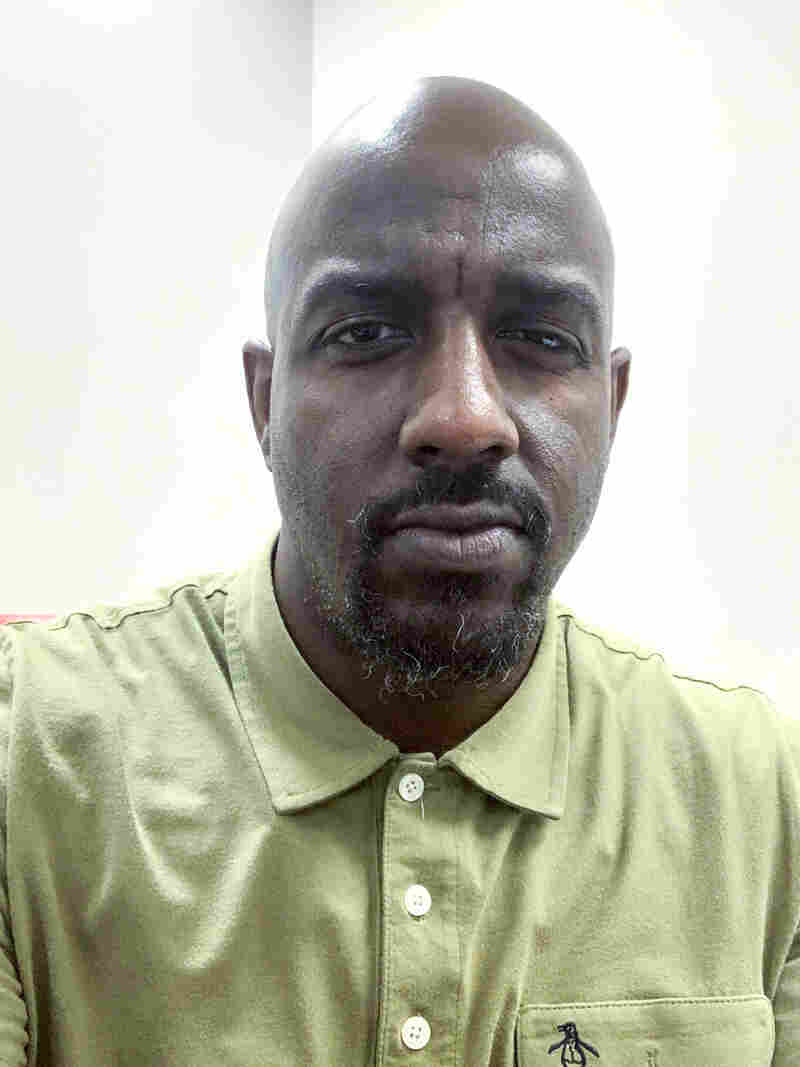 Some protests have become violent, marred by looting, clashes with police and countless arrests, and several state officials have enacted curfews. This amid the COVID-19 pandemic, which has seen a disproportionate number of deaths among African Americans, exacerbating challenges in these uncertain times for a people often racially profiled and long oppressed.

Cities are burning. Not just with fires but with anger.

"I'm not going to lie — I am angry," said Ellington, a 41-year-old marketing professional who has a 10-year-old daughter. "As a black man in America, it is already hard enough that we have to fight within ourselves to become a better person, but there are countless forces working outside of ourselves that are also working against us and have been for generations."

Ellington is one of nearly 200 people who shared with NPR what it's like to be black in America right now.

Nicholas Gibbs of Spring, Texas, is particularly concerned about his two toddler sons growing up.

Alexander Pittman, who lives in Fort Lauderdale, Fla., said there's a huge amount of anxiety on a daily basis regarding any contact with police even if you are doing nothing wrong or illegal, because you know it could escalate out of control.

"Being a black man in America, you know you live by a different set of rules," Pittman said.

He recounted what happened to him a few years ago when he'd just moved to Hollywood, Fla., and went out one evening to walk his dog, Marley.

"I was confronted by several Hollywood police officers. I was also roughed up and detained before being let go," the 32-year-old said, adding that no charges were filed against him.

As dad to a 4-year-old and a public school teacher, Pittman said he tries to have real conversations with his students and son about the role that race has played in the U.S. historically — and today.

"It's hard, because on one hand I don't believe in riots, looting and violence, but on the other hand, when is enough, enough? We need real, tangible policing reform on a national level, and that has largely been ignored." 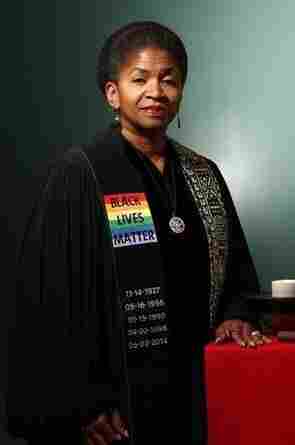 Many black mothers in America expressed fear for the boys and men in their lives.

"I'm weary of living in a constant state of anxiety and fear because I have black and brown men in my life: my son, brothers, friends, grandson, son-in-law and father. I'm bone tired of existing in a system that tells me every damn day that me and my people do not matter," said the Rev. Carol Thomas Cissel of State College, Pa.

A mother, minister and grandmother, Cissel said her "DNA will continue to scream in agony" because black men and boys are not safe in America.

"I will try to hold the pain and soul wounds of my people. I will mourn because I know wishes, words or rituals cannot keep my son and grandson alive."

Jami Vassar, a 34-year-old fourth-generation military veteran from Aberdeen, N.C., can relate. As a mom of two teenage sons, she worries about their well-being and tries to keep them close.

"They are my gentle giants, but they are big black boys, and I have to remind them that the world doesn't see them as kids and there is real danger just for existing," she said.

Vassar said although she comes from a family of proud Americans who boast a long line of service to the country, the world sees them as black first. Just last week while driving with her younger son, she said he expressed fears about getting pulled over. He'll be getting his driver's license soon.

"I had to tell him I'm afraid when I get pulled over. My family has served in every war since War World I. They served before African Americans could vote, and we continue to serve even though we are not always seen as equals. It hurts," she said.

Another mom, Edith Jennings of Holyoke, Mass., said she too worries about her two adult sons. Last week on an unusually balmy spring day in New England, while driving through a small area with one of them, they noticed two young white men standing by their bicycles, laughing and talking to each other.

"My son, who is 28 years old and now a new father of his own son, said, 'It must be nice to wake up in the morning and feel safe, to not be afraid to go out and do what you have to do for the day, to hang out with your friends, not be afraid of the police. I wonder what that is like.' When I heard that, I was almost in tears," Jennings said.

Having grown up in the 1960s and '70s and remembering a story her mom told about watching the Ku Klux Klan burning crosses in her yard, Jennings said she never expected to have to deal with such racial issues when she had her own kids.

"Now here we are in the 21st century and I have a 2-month-old grandson, and I wonder if he, as a young black man, will survive in America. I feel like black men and women are an endangered species here in America. That's what's it like being black in America now!" 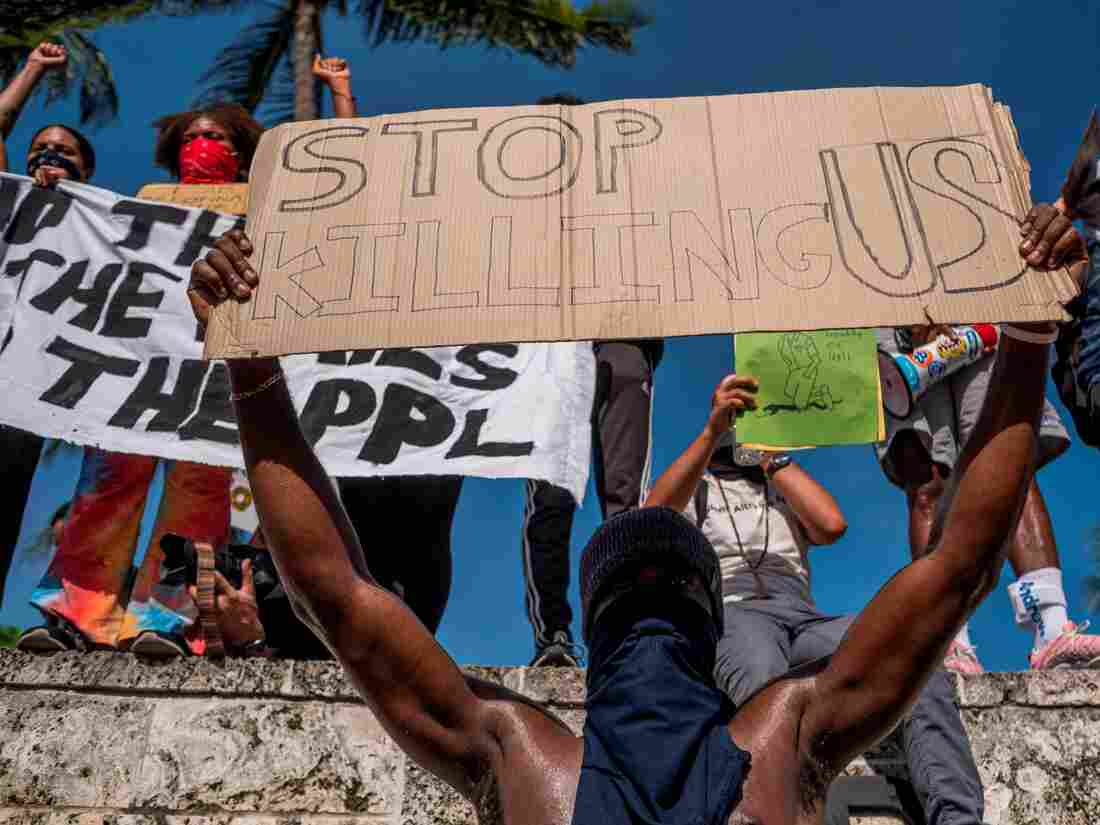 Protesters in Miami hold signs during a rally Sunday in response to the recent death of George Floyd. Ricardo Arduengo/AFP via Getty Images hide caption 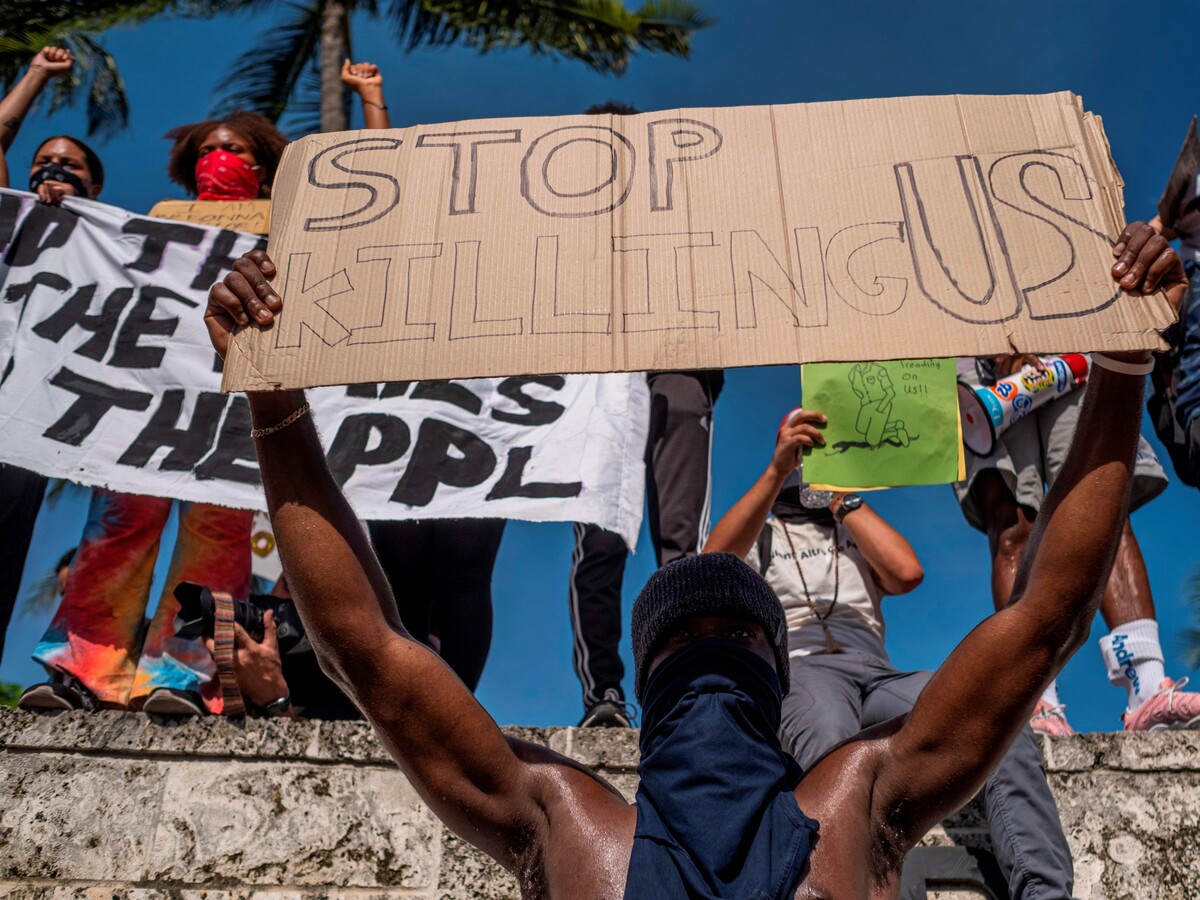 Protesters in Miami hold signs during a rally Sunday in response to the recent death of George Floyd.

Donna Ghanney of Brooklyn, N.Y., grew up during the same era as Jennings. She recalls white men standing on the corner and calling out the N-word as she passed by.

"All you had to be was a person of color to feel the hatred when you went near a white man. A feeling of fear, oppression, being disliked, having no rights, and the fear of being killed with a lie trailing behind the death," she said.

Other mothers shared their concern that nothing will change.

"People are tired of empty protests that fail to deliver change. Some care more about dogs than the lives of black and brown people in America," said Nicole Green of Melbourne, Fla., who said her childhood memories are filled with relatives being pulled over or being harassed by police.

Free Browning said the situation in the country is disheartening, particularly for a person who suffers from anxiety and depression.

"As a single mom of three and an Atlanta native, I'm angry, horrified, scared, hurt and uneasy. While I don't condone the destruction of many of the businesses here in Atlanta, I have lost my concern to care."

7 Shot At Louisville Protest Calling For Justice For Breonna Taylor

Others said being black in America can feel like being at war.

Tomlin said he dealt with a lot of racial tension living for more than three decades in Texas. While he says Albuquerque is different, he travels often out of state as a truck driver. After watching the video of Arbery being shot, he said he wants to be able to defend himself.

"I feel every person of color in America should be armed. I feel that the current administration and the 1% are guiding us into a civil war," he said. "I also feel that it is open season on black males in particular. People of color are being eliminated by police and disease. I plan on fighting until the end."

Michael Martin of Chicago said he feels like there's nothing he can do to protect himself and his family.

"We can't go jogging without worrying about being lynched; we can't go bird-watching without having the police called on us. Our children can't go outside and play without us worrying about them being gunned down and labeled 'suspects.' We can't sleep in our own beds without being executed," he said. "The same rights and protections that our white peers are afforded are not afforded to us. We can't arm ourselves without being labeled thugs and shot."

"Last night I cried to my partner," said Glenn Smith of Brooklyn, N.Y. "I cried because I realized how proud I am to be an American, a New Yorker and a Brooklynite. I cried because in those feelings of pride, I'm faced with feelings of contradiction. Why are cops brutally killing people that look like me?"

"They are so a part of my normal life now that I feel a bit desensitized. I still have to continue to try to put a brave face on while feeling angry, hurt, sad, anxious and tired. It's been like this my whole life," she said. "We were taught at a young age to make ourselves appear less threatening and to always keep our hands up. It's tiring trying to live your life while constantly in fear of someone shooting you down or accusing you of something you didn't do."

Still, amid these myriad emotions expressed by black Americans, some spoke of hope.

Cissel, the minister from Pennsylvania, said that for "all my people to be safe, the racist fabric of this country must be ripped to shreds and rewoven."

She's ready to do her part.

"I will light a candle, hope it blossoms into a steady flame of peace and say these words aloud: 'We are included. We belong. We are here.' For, just like you — entitled by birthright, we have a place in this world too."

NPR would like to hear about your reaction to these incidents and your personal experience as a black person in America. Please share your story here or in the form below, and a reporter might contact you.