Accessibility links
Rashad Turner Had Wanted To Be A Cop. He Founded A Black Lives Matter Chapter Instead The St. Paul, Minn., native trained to be a police officer — because he wanted to help. To him, the cops were the good guys. But what once felt like a calling to wear a badge ended long ago. 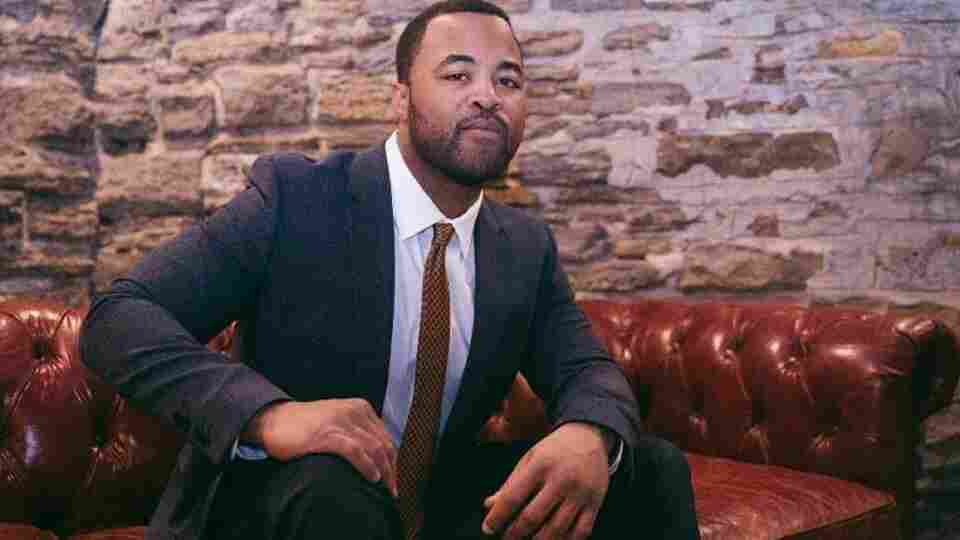 Rashad Turner founded the St. Paul chapter of Black Lives Matter in 2015. As a child growing up there, he wanted to help his community by being a police officer. Dante Davison/Rashad Turner hide caption 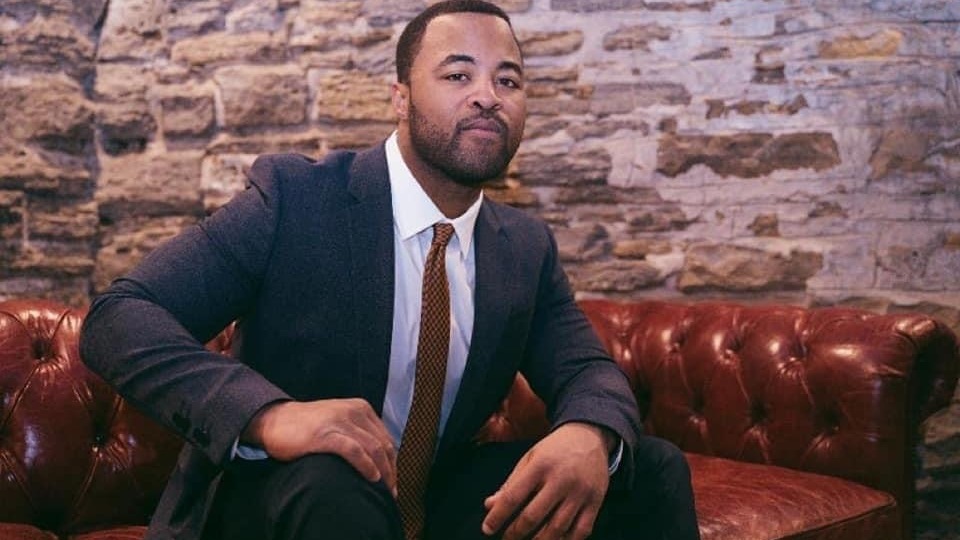 Rashad Turner founded the St. Paul chapter of Black Lives Matter in 2015. As a child growing up there, he wanted to help his community by being a police officer.

It was always a given which side he'd choose.

He always knew. It was that way for years.

He trained for it. He got a bachelor's in criminal justice. He enrolled in the police academy. All because he wanted to help.

To him, the cops were the good guys.

Turner is 35 now. When he was two years old, a man shot and killed his father in an alley during a dispute. No one should lose a parent that way, he thought. And policing was one way to protect a community.

"I had this idea of the Officer Friendly that came to our school," he says. "Like, that was all cops."

His friends didn't always get it, he says. Some of them quit him. In the African American neighborhoods he moved in, there had been too many bad run-ins with police. But back then, Turner was used to defending law enforcement.

Not so much anymore.

Five years ago, he founded a chapter of Black Lives Matter in St. Paul. It's the "twin city" to Minneapolis, which has become ground zero for a roiling debate on race and policing that exploded after the killing of George Floyd, who died after a police officer pressed a knee into his neck while detaining him.

With Floyd's death and the murder of other black Americans by police officers, he knows where he stands. What once felt like a calling to wear a badge ended long ago.

On a hot day recently, standing at the edge of St. Paul's Indian Mounds Regional Park amid the crackling of fireworks, he explained why.

'I knew that kid was dirty'

Turner had recently finished an internship with the St. Paul Police Department. He was driving home from umpiring a Little League baseball game.

A block from his grandmother's house, he slowed at a stop sign to talk to a young man he recognized from the neighborhood.

The kid had been in a fight, Turner says. And as they were talking, police showed up. They checked Turner's backseat and saw a BB gun, which he used for picking off squirrels on the golf course with friends.

The officers arrested him and tried to book him on weapons charges.

From the back of the car, Turner remembers a message on the police computer display up front. One of the officers he worked with from his internship was talking about him. The words appearing on the display stung. "Something like, 'Oh, yeah, that's that intern. I knew he was dirty,' " Turner recalls.

The teen who aspired to wear the uniform interpreted that message one way.

"It didn't matter that I was putting my blood, sweat and tears into this internship," he says. "I was just another n***** to that cop."

'That cop stuff is changing you'

But Turner stuck with it.

He completed skills academy, a patrol operations course, and by the fall of 2008, he was married.

Then one day, Turner scared himself. 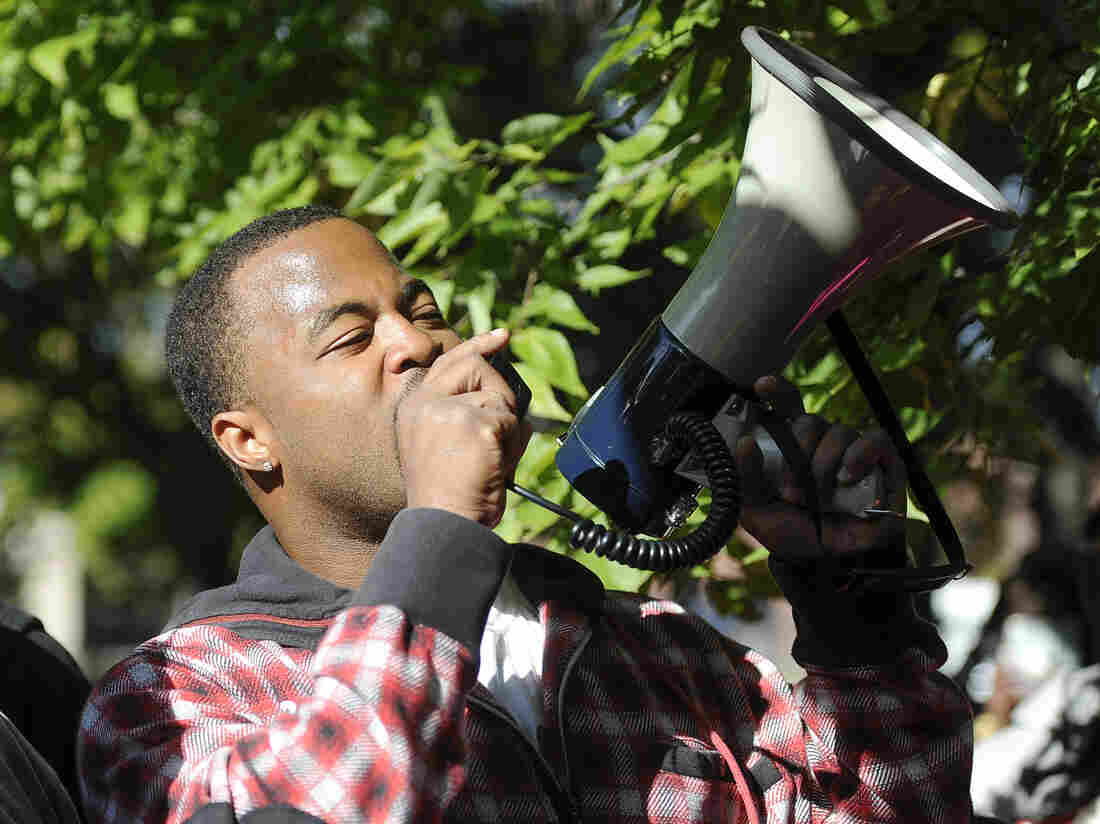 Rashad Turner, founder of the St. Paul chapter of Black Lives Matter, speaks to supporters before they begin a march against police brutality in St. Paul, Minn., on Oct. 4 2015. Craig Lassig/AP hide caption 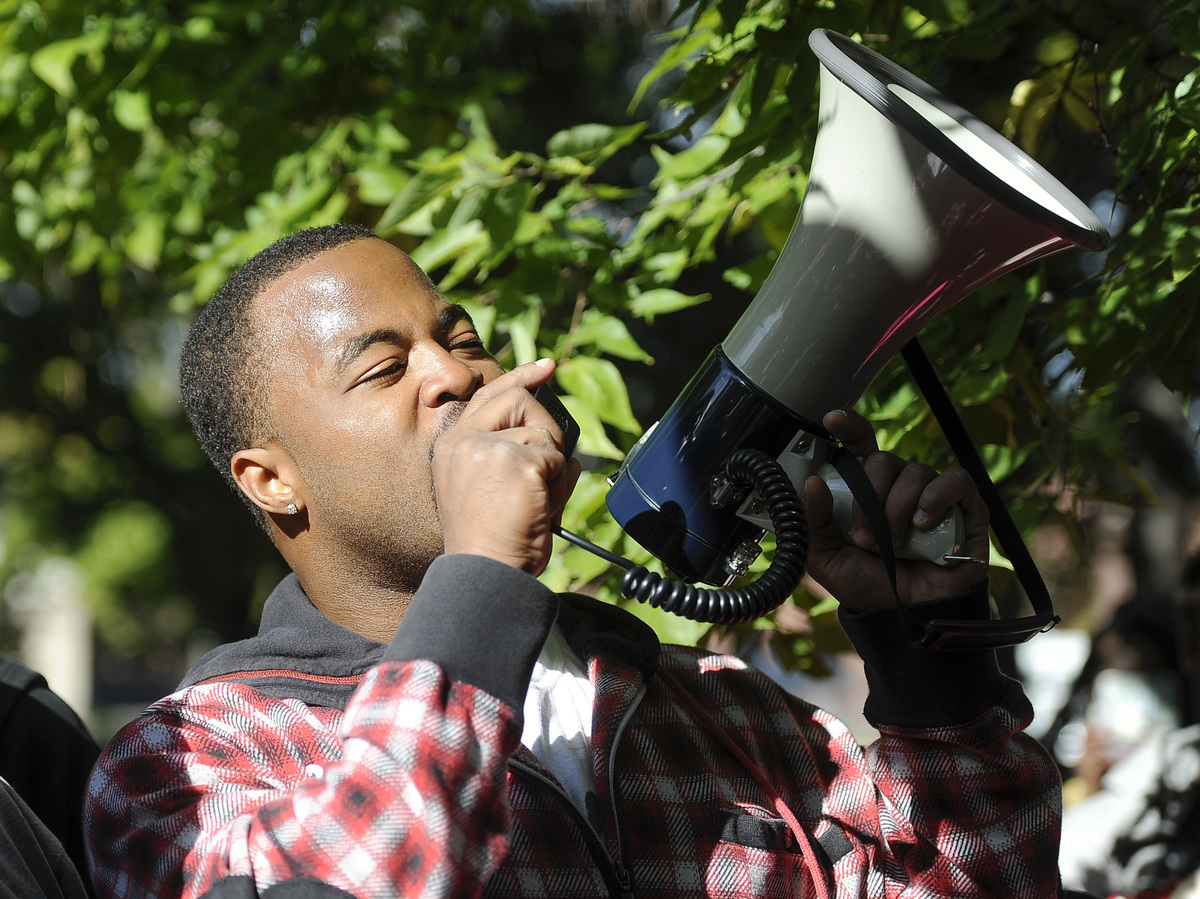 Rashad Turner, founder of the St. Paul chapter of Black Lives Matter, speaks to supporters before they begin a march against police brutality in St. Paul, Minn., on Oct. 4 2015.

His wife was coming down the stairs, still wearing her robe.

"I had the shades up in the living room. And she simply asked me, 'Why you got the shades all open like that?'"

His reaction startled them both.

"I just sort of snapped."

He was raising his voice, projecting power, amped up to an alarming degree. Turner's "command presence" training — a take-control policing tactic used to demonstrate strength — was drilled into him. He felt it taking over.

"This was the love of my life — my wife, eventually. My child's mother," he says.

Later on, they discussed what happened. Something ugly and angry had spilled out.

"And I just remember [her] saying, 'That cop stuff is changing you.' "

'It was just sort of that last straw'

Even still, Turner kept going. He graduated from the police academy in St. Paul. He decided it was time to leave home. He applied for a job in Tulsa, Okla., and went for an interview. He says he aced the written test. A panel interview followed.

"I'm doing this oral board, which is basically at the time was a bunch of white guys, like eight white guys sitting around the table — commanders, lieutenants, sergeants."

They threw a scenario at him.

"They said, 'You get a call to a bank. The bank's just been robbed. They give you the suspect's description. The suspect had a gun. What do you do?'"

He ticked through his actions: Pull up to the call, let dispatch know he's arrived, call for backup.

"The suspect's walking towards you. What are you going to do?" they continued.

The panel pressed on. The suspect is still coming towards you, he's not complying. Turner says he knew what they wanted to hear.

"They wanted me to say I would kill this guy."

He said so: "I eliminate the threat."

He told them: "I'll discharge my firearm and eliminate the threat while he's still going." He wouldn't stop firing until the threat was eliminated.

There was a pause, he says, and a few of the panelists applauded.

So Turner decided being a cop was not for him.

He decided instead to help his community by becoming an activist. Turner founded the St. Paul chapter of Black Lives Matter in 2015, the same year police fatally shot 24-year-old Jamar Clark in Minneapolis.

He hasn't regretted his decision.

Turner's reaction to seeing the video of Floyd with a police officer pressing his face into the ground was, he says, "here we go again." Then he went into a dark place, he says.

But it's not a dark place where he needs to dwell. The point of his wanting to be a cop was to help people. Turner has protested peacefully. He has kept an eye on his neighborhood.

Not far from where Turner told his story, a group of mostly young black men stood out in front of a house, clowning among friends. They talked about Floyd's death, about being hassled by cops and about an incident that just happened. Earlier, they said, a man drove by hurling slurs and telling them to "go back" to their own country. Within minutes of their telling, a police cruiser pulled up. Someone had accused the young men of selling stolen shoes, the officers said. The group told them about the driver who harassed them earlier, suggesting he made the call. One of their mothers came out of the house, laughing, and inviting the cops inside to see for themselves. The officers drove off.

But Turner was watching the whole scene. He knows how to deal with cops.

As he walked away, the Black Lives Matter activist offered some parting advice to the group. "Next time," he told them, "get their license plate."