Accessibility links
Poll: Trump Approval Rating Dips After George Floyd Was Killed The NPR/PBS NewsHour/Marist survey found Americans see the nationwide protests as legitimate — a big shift from the 1960s — and almost half strongly disapprove of the job President Trump is doing. 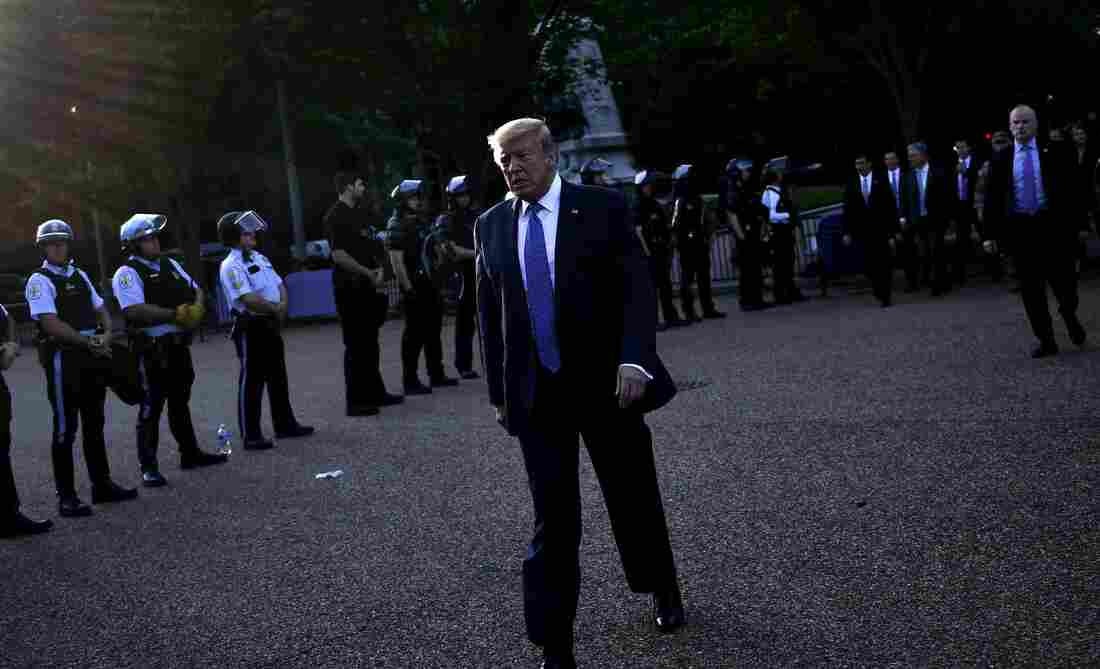 President Trump walks back to the White House escorted by the Secret Service after appearing outside of St John's Episcopal church across Lafayette Park in Washington, D.C., on Monday. Brendan Smialowski/AFP via Getty Images hide caption 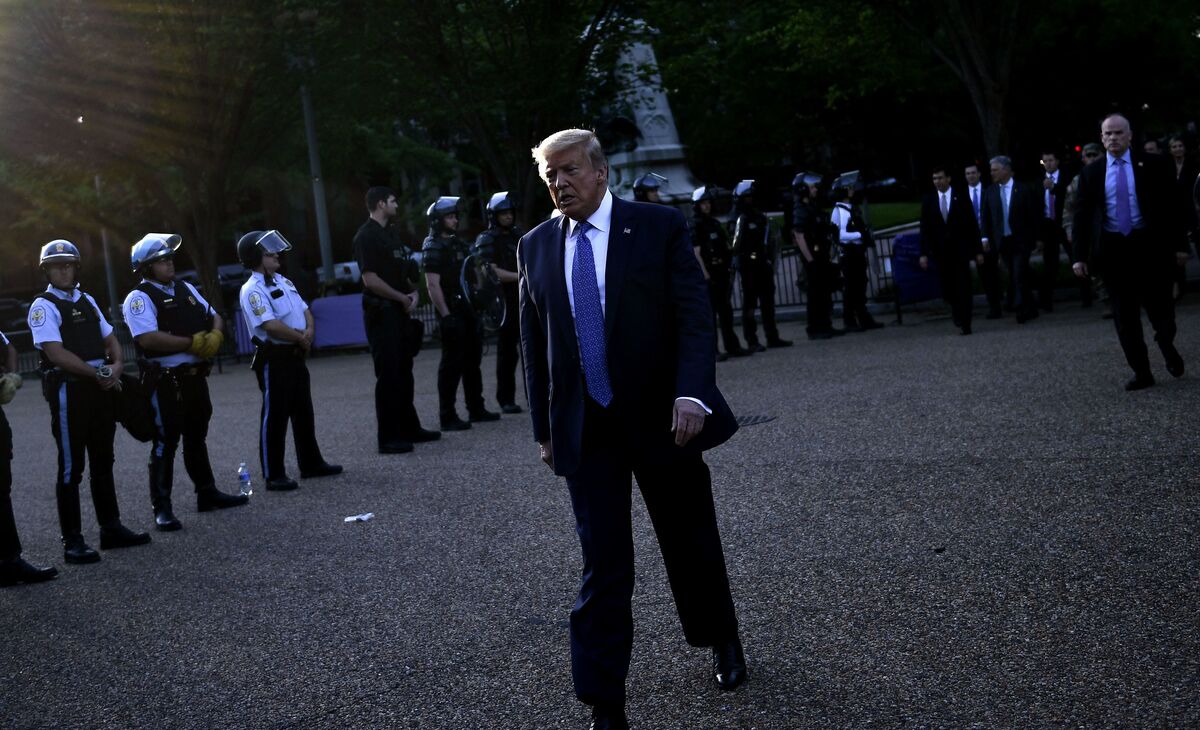 President Trump walks back to the White House escorted by the Secret Service after appearing outside of St John's Episcopal church across Lafayette Park in Washington, D.C., on Monday.

As the country erupts in protests over police brutality and racism, two-thirds of Americans think President Trump has increased racial tensions in the U.S., according to a new NPR/PBS NewsHour/Marist poll.

The poll offers a snapshot of a nation in upheaval after a video captured a Minneapolis police officer with his knee on the neck of a black man named George Floyd, who was pleading for his life before he died.

Overall, 67% said Trump has mostly increased racial tensions, including 92% of Democrats, 73% of independents, 88% of Africans Americans and 63% of whites.

Just 18% said he has decreased tensions, including 41% of Republicans. In fact, almost 6 in 10 Republicans believe he has either increased tensions (29%) or are not sure (30%). That's a finding the pollsters see as significant given how in lockstep Republicans have been with Trump on nearly everything.

"It's very unusual to see Republicans break when the name Trump is presented, but that is the case here," said Lee Miringoff, director of the Marist Institute for Public Opinion, which conducted the poll.

Trump has threatened the use of military force against violent rioters, who are outnumbered by peaceful protesters and who the president has said dishonor Floyd's memory. A tweet of his that included the civil rights-era phrase "when the looting starts, the shooting starts" was flagged by Twitter as violating its policy against "glorifying violence."

Coinciding with Trump's handling of race relations are the ongoing coronavirus pandemic and the downward turn of the economy. And the poll found that Trump is suffering politically.

The number of people disapproving of the job he's doing as president is near a record; the intensity of the opposition against him — how many people strongly disapprove — is the highest it has ever been. To boot, he's losing by a substantial margin to presumptive Democratic presidential nominee Joe Biden, according to the poll.

Trump's approval rating is 41% in the poll. That's about where it has been since he took office. It's down 2 points since March, the last time the poll measured his overall approval rating, but his overall disapproval number jumped 5 points to 55%.

His fairly consistent approval number masks significant movement beneath the surface. Almost half the country now — 47% — strongly disapproves of the job he's doing.

It was remarkable when earlier in Trump's presidency, some 40% strongly disapproved of him, but 47%? To put that in context, that's a point higher than the percentage of the popular vote that he got in the 2016 presidential election.

That movement comes largely from independents. Overall, 56% of them disapprove of the job Trump is doing, up from 50% in March. The number of independents now strongly disapproving has jumped 10 points, from 33% to 43%.

As his disapproval shifts, Trump is falling short in the head-to-head matchup in the November election with Biden. The former vice president leads Trump, according to the poll, 50% to 43%.

Of course, Hillary Clinton led in many polls in 2016, and the election is still five months away. But Biden being at 50% and up outside the margin of error is noteworthy.

Biden, it appears, has made inroads with some key groups, like suburban voters, whites, independents and men, and he's beating Trump in this poll by wider margins than Clinton did with women and voters under 45:

Suburban: In 2016, according to exit polls, Trump won suburban voters by 4 points; Biden leads in this poll by 18 with them.

Whites: Trump won them by 20 points; Trump leads Biden in the poll by only 5.

Independents: Trump won them by 4; Biden now leads with them by the same margin.

Women: Clinton won them by 13 points; Biden leads Trump by 18 with them.

Like in other polls, there's also a softening for Trump with older voters. He won voters 45 and older, for example, by 8 points in 2016, but is ahead in this poll with them by just 4. And he leads with baby boomers, those age 56 to 74, by just 1 point.

For all the criticism Biden has received from some corners for his policies on race and criminal justice, he leads Trump 88% to 9% with black voters in the poll, nearly the exact margin Clinton received in 2016.

Biden is also far and away seen as best, between him and Trump, to handle race relations in the country 52% to 34%.

The one group Biden could stand to see improvement with, however, is Latinos. He didn't have much luck with them in the primary campaign, as many chose Vermont Sen. Bernie Sanders over him. And in this poll, he leads with them by 24 points, but Clinton won them by 38.

Times, they are a-changin'

And while a majority still have at least a "fair amount" of confidence in police in their community to treat black and white people equally, it's down 8 points from a Marist poll in 2014.

There are, predictably, divides along party and racial lines. When it comes to whether the protests are legitimate as opposed to people acting unlawfully, 87% of Democrats and 65% of independents say they're legitimate, while 59% of Republicans view them unlawful behavior.

Along racial lines, 77% of African Americans and 70% of Latinos view them as mostly legitimate protests, while 58% of whites do.

On whether they are protests or riots, there are similar splits — 85% of Democrats and 65% of independents see them as protests; 59% of Republicans say they are riots. Along racial lines, 79% of African Americans, 68% of Latinos and 56% of whites label them protests.

Sixty-three percent say they have either a great deal (35%) or a fair amount (28%) of confidence in the police, but that's down from 71% from the poll in 2014, the same year that saw the deaths of Michael Brown in Ferguson, Mo., and Eric Garner in New York.

But those numbers represent a sea change in attitudes from the 1960s when demonstrators took to the streets to fight for civil rights.

In 1961, Gallup found that 57% thought lunch counter sit-ins, "freedom buses," and other demonstrations would hurt African Americans' chances of being integrated in the South. In 1963, asked about the planned March on Washington that produced Martin Luther King's "I Have a Dream" speech, 60% of Americans said they had an unfavorable view of it.

In 1964, 74% said civil rights demonstrations would hurt African Americans' cause for racial equality. Later that year, 73% said they should stop demonstrations.

In 1968, after the disturbances inside and out of the Democratic National Convention in Chicago, majorities approved of the police's response to anti-war protesters, and two-thirds said Chicago Mayor Richard Daley was right in his forceful use of the police against demonstrators.